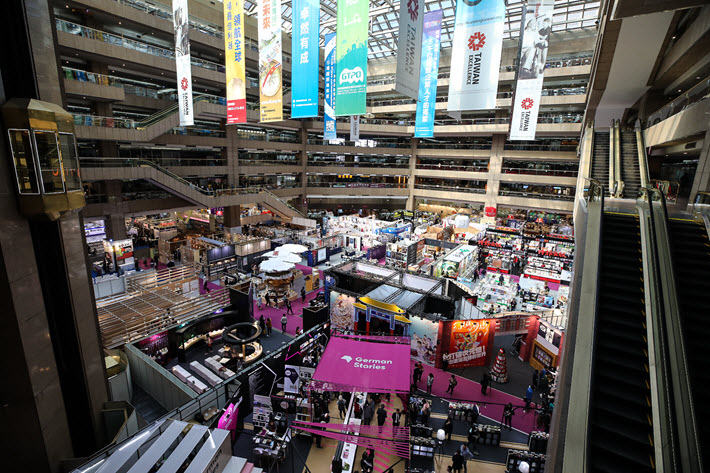 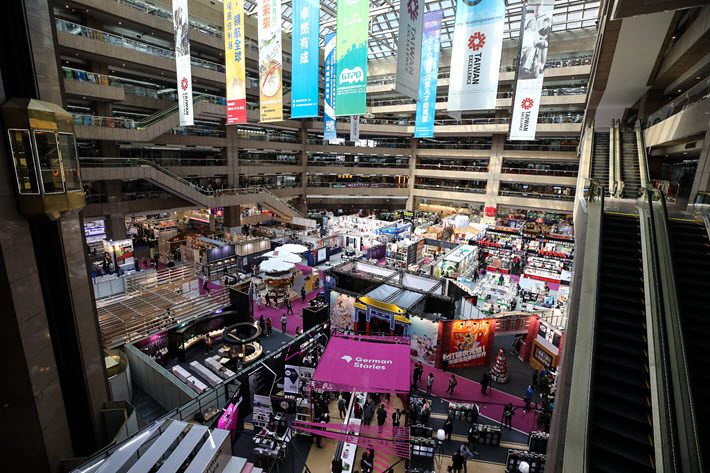 The 414-square-meter German collective stand is the center of Germany’s Guest of Honor programming this week at the Taipei International Book Exhibition at the Taiwan capital’s World Trade Center. Image: TIBE Terry Lin

Boos: ‘Reading is Crucial in This Digital Age’

On Tuesday (February 12), Germany’s Guest of Honor events at the Taipei International Book Exhibition have opened, with officials from Taiwan and Germany on hand.

Taiwan’s vice president Chen Chien-jen was in attendance for the kickoff, as were the minister of culture Cheng Li-chiun; Thomas Prinz, who directs the German Institute Taipei; Marla Stukenberg, director of the East Asia Region of the Goethe-Institut; and Juergen Boos, director of the Frankfurter Buchmesse.

The premiere of the program, with its theme of “German Stories,” brings together 13 German authors who will be presenting their work with some of their Taiwan counterparts.

The German collective stand, which serves as the hub of activity throughout the event—which runs through Sunday (February 17)—comprises space for 37 exhibitors. Fifteen publishing houses have sent their representative to the fair, and a total 28 events are scheduled as part of the guest of honor plan.

The book collections represented on the stand are displaying more than 600 contemporary German titles, which, taken as a whole, reflect the breadth of diversity in the nature and depth of those “German Stories.” 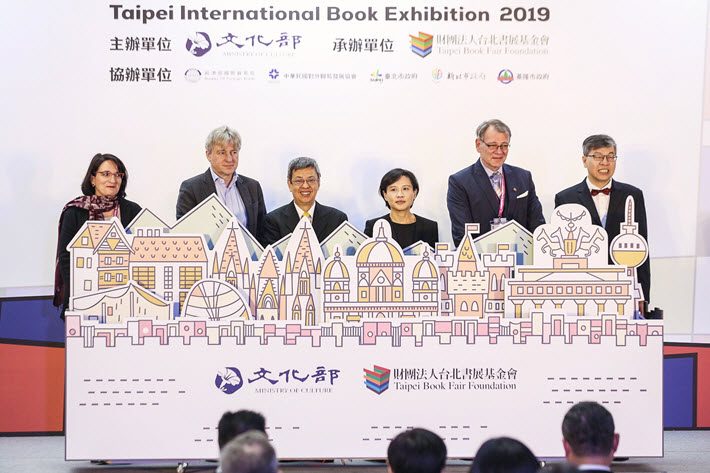 In a prepared comment, Thomas Prinz, who is director general of the German Institute Taipei, is quoted, saying, “Taiwan has an exceptional publishing industry and a superior culture of reading. Every year, 5,000 publishers bring out 40,000 books, generating sales of more than €600 million.

“Publishing houses have a special responsibility when it comes to upholding freedom of opinion and ensuring free speech.”Juergen Boos

“That might not be much compared to the electronics industry, but the value of books is not expressed in sales figures alone. In this case, it shows the high degree to which Taiwan has developed as a free and democratic society.”

Boos, in the context of his unique perspective on international publishing, said, “We want to use the presence of ‘German Stories’ at this year’s Taipei International Book Exhibition to further deepen the close relations between the German and Taiwanese publishing industries.

“Publishing houses have a special responsibility when it comes to upholding freedom of opinion and ensuring free speech. Reading is crucial in this digital age for forming political opinions and for participating—something that begins in early childhood.

“The considerable interest that Taiwan’s publishers have shown particularly in German nonfiction and in children’s books is a sign that publishers are taking this responsibility seriously.”

And Stuckenberg, in her leadership role with the Goethe-Institut’s East Asia Region, said, “Germany’s presence as Guest of Honor at the Taipei International Book Exhibition offers an excellent opportunity to present Germany’s literary spectrum and deepen the cultural exchange between Taiwan and Germany in various ways.

“German and Taiwanese authors, publishers, agents and institutions will further develop their networks during the week of the fair. This exchange will undoubtedly produce the relevant impulses for new partnerships.

“We are very pleased that we can actively contribute to the multifaceted program through our many years of experience as a German cultural institute in Taipei, our contacts in the literary and publishing scene, and our ideas. The Taipei International Book Exhibition is also this year’s cultural highlight for the Goethe-Institut Taipei.”

Prinz: ‘A Superior Culture of Reading’ 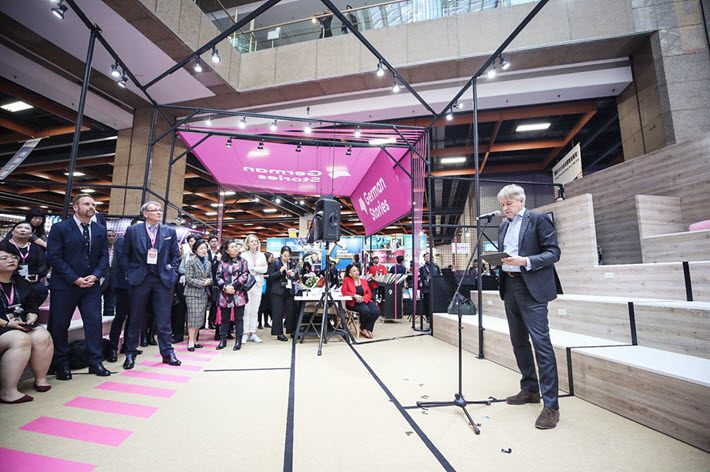 Juergen Boos, director of the Frankfurter Buchmesse, speaks at the opening of the Germany Guest of Honor program at the Taipei International Book exhibition. Listening are Jens Rösler, left, who directs the Goethe-Institut Taipei, and Thomas Prince, director general of the German Institute Taipei. Image: TIBE, Terry Lin

As Publishing Perspectives has reported, complementing the authors programmed into the “German Stories” theme for the week are explorations of topical social issues including the impact of artificial intelligence and technology on society. These will stand alongside issues that have resonance in Taiwan, such as coming to terms with the past and defining justice.

To mark the centennial of Bauhaus in 2019, Germany’s Guest of Honor presentation will devote particular attention to that legendary movement, founded by Walter Gropius in Weimar in 1919 and sequentially active in Dessau and Berlin under Hannes Meyer and Ludwig Mies van der Rohe. The Bauhaus closed its operations in 1933 under criticism from the Nazi regime, but the profound influence of its concepts in design and art have persisted in many parts of the world.

The design of the German collective stand—which is located in Hall 1 of the World Trade Center, No. 5, Section 5, Xinyi Road—draws on elements of Bauhaus.

“Making connections, adopting a new vantage point, changing perspectives–that’s what Germany’s presentation as Guest of Honor is meant to facilitate,” says architect Sabine Weismüller from the Düsseldorf-based architectural firm Scheßl Weismüller. The company has developed and implemented the idea for the stand together with the Frankfurter Buchmesse.

Of special interest, the thematic area “Children’s and Young Adult Literature” is presented around air-cushioned recliners. The book tables are low enough that visitors can lie down and relax while browsing.

The German collective stand comprises three different thematic areas which are connected by a central element.

The Storyline allows publishers, authors, translators and visitors to come together as equals.

The children’s area is only steps from the “100 Years of Bauhaus” exhibition.

And current book production in Germany is the focus of the third major area. 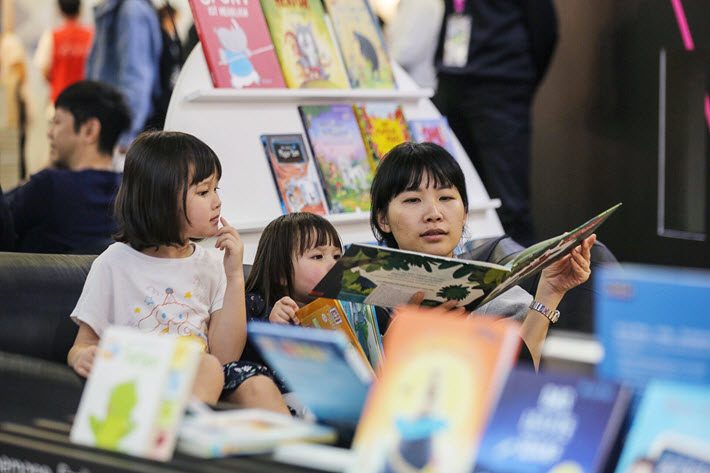 In the innovative design of the children’s and YA area of the ‘German Stories’ show, visitors can browse books while reclining Image: TIBE, Terry Lin

More from Publishing Perspectives on the Taipei International Book Exhibition is here, more on China’s market is here, and more on the German market is here.