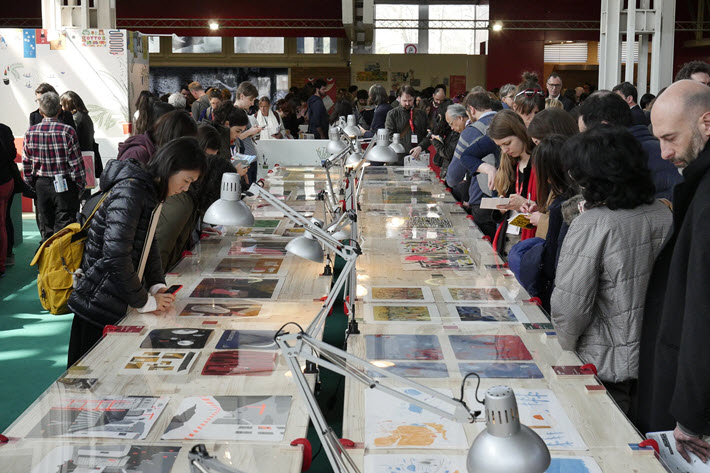 With programming on African-American culture, women’s achievement, and a resurgence of handwriting, Bologna Book Fair plans an ambitious first look at its physical renovations, too. 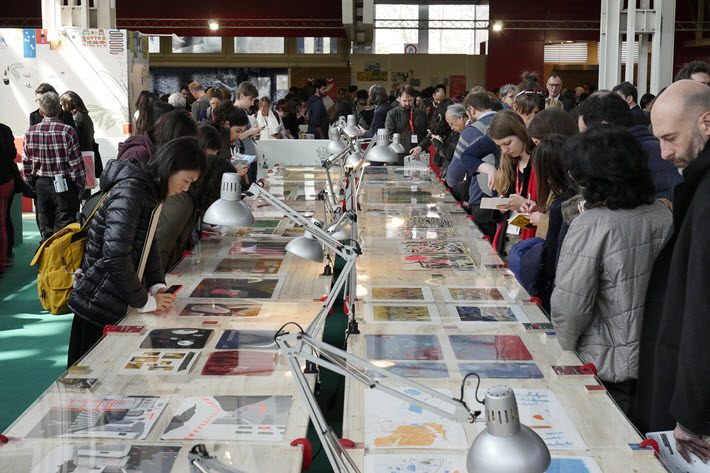 At the 2018 Illustrators Exhibition at Bologna, Children’s Book Fair with its flat-display format of works laid out on tables Image: BCBF

In its 56th edition, the Bologna Children’s Book Fair (BCBF) has announced a four-part set of thematic descriptors for its programming:

Running April 1 to 4, the trade show welcomes Switzerland as its guest of honor market, and is also fielding an apps developer program for the first time, an event called “TheKidsWantMobile.”

BolognaFiere, the show’s producer, this year has mounted an expansion and reconfiguration of its exhibition center, and will be using Pavilions 29 and 30 for the first time. They were demolished and rebuilt in 10 months to add a reported 33,000 square meters of space—at a cost of what the company says was €45 million.

Overall, the renovations in play to be completed in 2024 will cost €138 million and encompass 270,000 square meters of exhibition surface, the organizers say in their media messaging.

While other major trade shows in the world industry continue to add and expand their children’s and YA content areas and emphases, Bologna has retained its stance as the prime go-to event for youth reading, for rights trading in the sector and for analysis of current trends.

This year’s fair is expected to include appearances by:

In outreach, Bologna’s organizers point to the New York Rights Fair, which in its inaugural outing during BookExpo last year struggled to find its footing in a separate venue. This year, the rights fair—which is in essence BookExpo’s original rights trading center—returns to the Jacob Javits Center, May 29 to 31.

In addition, Bologna will for a second year partner with China Shanghai International Book Fair to produce that event, November 15 to 17.

The Swiss presence as guest of honor this year will focus on the market’s “ABC of Switzerland” exhibition, which is keyed on a letter of the alphabet being matched to each of the country’s 26 cantons. A jury has selected 26 illustrators, some among the best known of the profession in Switzerland and some still being discovered for their work.

Expressing the cultural variety of the land, the chosen words are in all four national languages: Romance, Italian, French, and German, all translated into English for the international audience. 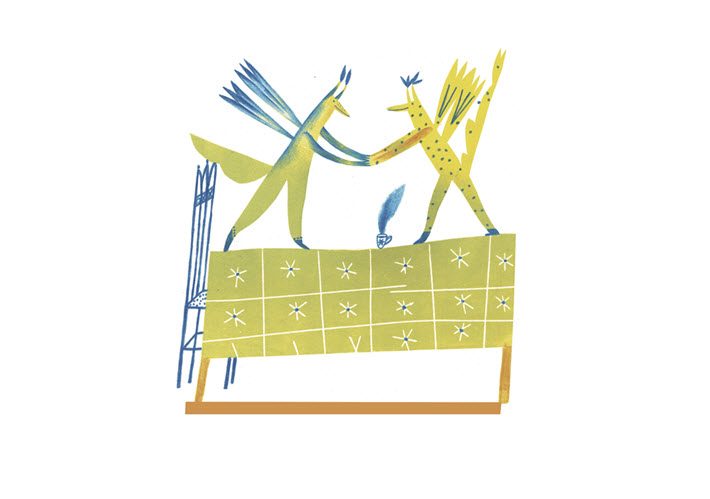 A work of Masha Titova, whose illustrations set the visual themes for this year’s Bologna Children’s Book Fair. Image: BCBF

The show’s Illustrators Exhibition started with work of 2,901 illustrators from 62 countries for a total 14,505 plates submitted to be examined by a jury of five.

The result is a show of 76 artists selected from 27 countries and region to be seen at the fair’s Service Center, staged for a third year with plates rearranged on  horizontal shelves allowing visitors to walk around them and thus see them from the same perspective as the jury.

Three solo exhibitions accompanying the 53rd Illustrators Exhibition are of:

The International Children’s Booksellers Conference will focus on independent bookshops, on their role in the publishing industry and in the dissemination of reading among children and young adults. It’s co-organized with ALIR, the Italian Association of Independent Children’s Bookshops.

The Bologna Licensing Trade Fair (BLTF), with its own site here, is back this year for a 12th edition, with somed 600 brands, available for the Italian, Southern European, and Eastern European markets.

You can follow news from the Bologna fair at hashtag #BCBF19 .