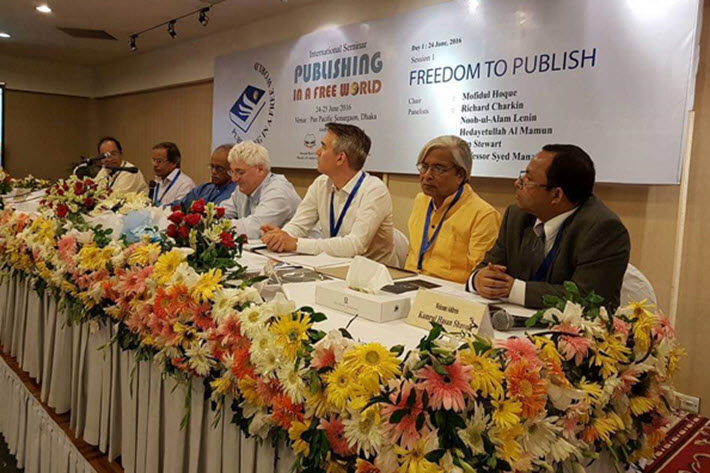 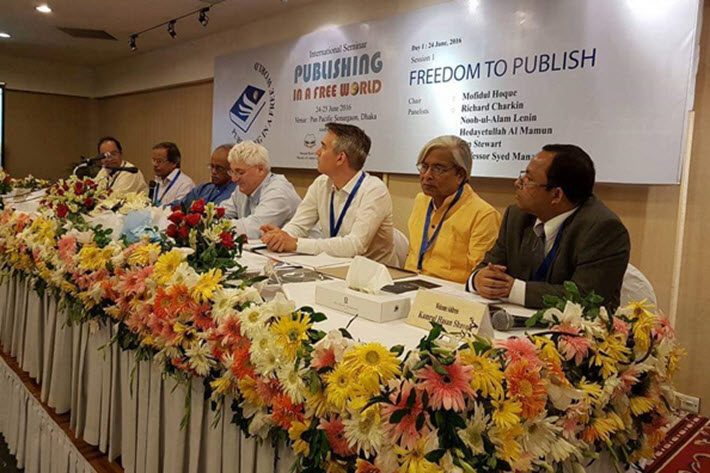 ‘An Absurd Act of Self-Harm’

It’s hard to be living in London right now without being sucked into the debate about you know what.

The photo above was taken on June 24, 2016, in Dhaka. I’d awakened very early that morning suffering from jet lag. Initially I thought I was having a nightmare. Gradually I realized that the country of my birth and residence had voted to leave the European Union and thus commit an act of absurd self-harm.

The conference, organized by the excellent Academic and Creative Publishers Association of Bangladesh, was important and successful but the news from the UK stayed with me as one of many moments in a publishing career.

It prompted me to think of other such moments that might be of interest. Here’s one.

‘Between Frustration and Fulfillment’

In 1982, I was head of reference publishing at Oxford University Press. An article in Publishers Weekly reported that a start-up firm called Dictronics had licensed a range of Random House dictionaries for conversion to use on computers via floppy discs (remember them?).

I managed to identify and phoned from Oxford the main founder and boss, Dick Brass, to explain how he really should be licensing some Oxford dictionaries (for a large amount of money). He seemed to agree and invited me to discuss this further in New York. I explained that I didn’t have cost of a ticket in my travel budget (OUP was severely strapped for cash at the time, hard to imagine today) and he agreed to pay for the ticket.

The following week I arrived in the Dictronics offices in New York to meet the four founders. They were Brass, an IT genius, a literary agent, and the intellectual whose job at the time was to compose electronic dunning letters for credit control departments. (“Please send us the money you owe, you are two months late, send us the money, send us the money or else, we’re coming to get you. etc.”)

The office was a bit New-York-shabby—I didn’t know then that shabby meant chic—but the enthusiasm of the team was infectious. They showed me one of their first products, a couple of floppy discs in a square white box. Strangely, the box seemed too big for the discs and they rattled around inside. They explained that the boxes were overstocks from another floor of the building in the business of packaging nylon stockings. Electronic publishing at its most economical.

We struck a deal for a substantial amount of money for the license. I believe it was for $600,000, all of which went to OUP’s bottom line as there were no external authors. That moment became my first real association with what we now call digital publishing.

As is the way of things Dictronics was sold and became Wang Electronic Publishing, which morphed into something else. The founders went their separate ways but not before this project gave me another memory.

I was invited to review the prototype, or “proof” in my publishing language, of the first electronic version of the Pocket Oxford Dictionary. It was essentially a crude spell-checker.

They explained how anything I typed in would be read by the software and matched against the dictionary word list. If there was no match the word would be highlighted as a misspelling and could be corrected. Pretty impressive at the time.

“‘Charkin’ is now included in your personal dictionary. It can be found between ‘charity’ and ‘charlatan.'”Richard Charkin

But there was more. They invited me to enter my name, Charkin. It was, of course, highlighted as a misprint. I could, however, press a key and ask for the word to be added to my personal dictionary so that it would be recognized as legitimate in future. I pressed the key. The computer whirred and came up with, “Charkin is now included in your personal dictionary. It can be found between charity and charlatan.”

Try another word they said.

I wondered whether in that puritanical American way they had bowdlerized the dictionary and had eliminated the traditional Anglo-Saxon words found in British dictionaries. I entered the most common four-letter word. Indeed it was shown as a misspelling. I entered it into my personal dictionary, the computer whirred and came up with, “F**k is now included in your personal dictionary. It can be found between frustration and fulfillment.”

Even software engineers have a sense of humor.

But back to today.

I don’t want to bore readers with a diatribe on the subject of Brexit.

As I’m in dictionary mode, the three words which best describe my view of what’s happening are sham, shame, and shambles.

I’d hoped that by the time this was published, we should have come to our senses.

Richard Charkin’s column runs on the morning after Parliament’s historically resounding defeat, 432 votes to 202, of Theresa May’s Brexit plan. The rejection of the May plan has prompted Labour to trigger a confidence vote. —Porter Anderson