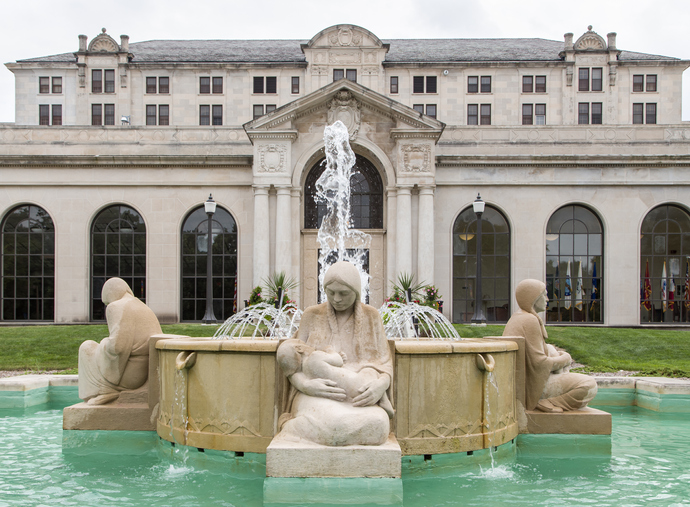 The new three-year pilot agreement with Berlin’s De Gruyter aligns with Iowa State’s endorsement of the OA2020 open access initiative, based in Munich.

At Iowa State University, the Fountain of the Four Seasons by Christian Petersen. Image – iStockphoto: Wolterk

The Berlin-based independent publisher De Gruyter has announced this week the signing of a “read and publish” agreement with Iowa State University Library, the first of its kind for the German house in North America.

The three-year pilot agreement, according to the publisher’s media messaging, “allows for all articles written by authors at Iowa State University to be made open access immediately upon publication.

“In addition, Iowa State patrons will be provided with access to De Gruyter’s “Research Now by De Gruyter” package, which includes all De Gruyter journals that are subscribed to by North American ARL institutions.”

De Gruyter’s “hybrid journal pricing structure” is in play here, with journal subscription prices adjusted based on the percentage of open access articles. A deep discount is provided, as well, the company says, “to Iowa State authors who publish their articles in one of De Gruyter’s many pure open access journals.”

In a prepared statement, Curtis Brundy, Iowa State’s librarian for scholarly communication and collections, is quoted saying, “We are very excited to sign this transformative agreement with De Gruyter, since the approach throughout the negotiations has been one of partnership and mutual benefit.

“As an OA2020 signatory, the ISU University Library actively supports open access publishing by our authors.

“With this agreement, we will expand our access to De Gruyter’s journals and increase the number of open access materials available from our scholars.”

His reference to OA2020 is to a Munich-based collaborative effort signed by institutions in many parts of the world to replace “the subscription business model with new models that ensure outputs are open and re-usable and that the costs behind their dissemination are transparent and economically sustainable.”

The endorsement carries several stipulations to which signatories agree.

First, they’re asked if they agree that:

And then they’re asked to promote the primary principle: “We aim to transform a majority of today’s scholarly journals from subscription to OA publishing in accordance with community-specific publication preferences. At the same time, we continue to support new and improved forms of OA publishing.”

The list of endorsements for OA2020 now numbers 120. Iowa State is joined there by such international libraries as the Royal Danish Library, the Sichuan University Library, the Hellenic Academic Libraries Link, the Conference of Italian University Rectors, Prague’s National Library of Technology, and the European University Association.

In March, another major American endorsement came from the University Library at UC Berkeley. In its announcement, the library’s staff wrote, “OA2020 is an international movement, led by the Max Planck Digital Library in Munich, to convert the entire corpus of scholarly journal literature to open access by the year 2020.

“Open access promotes free, immediate access to research articles and the rights to use these articles to advance knowledge worldwide. OA2020 is a framework to achieve open access, and one solution for the rising costs of subscription journals and the need for reduced barriers in accessing and reusing information.”

More on the OA2020 initiative is here.