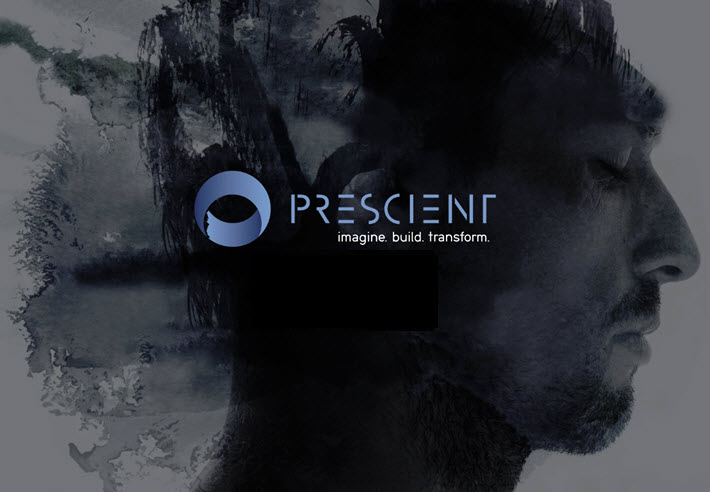 In Canada, Access Copyright is working on developing blockchain solutions for book publishing, including smart contracts and an attribution ledger. 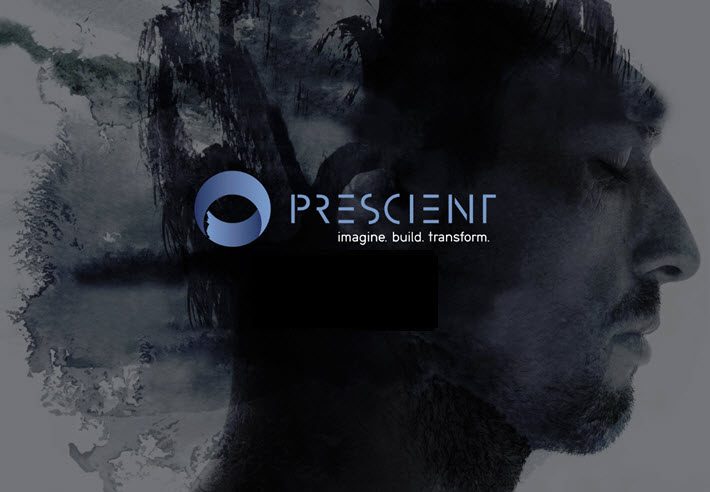 Prescient–found at PrescientInnovations.com–is a wholly owned subsidiary of Access Copyright, and is dedicated to ‘exploring the future of content’

In his new paper on blockchain—and What Is Blockchain: Why and How Should the Industry Care?—publishing consultant and entrepreneur Sebastian Posth writes with characteristic candor, “Doing research in the field of blockchain and cryptocurrencies will get you entirely lost.”

Many in publishing feel this way, not least because, as Posth writes from his consultancy’s base in the Netherlands, “The number of blockchains, protocols, networks, platforms, software, tokens and other applications on decentralized networks is so large that it is hard to keep track.”

In an interesting irony on the road to understanding blockchain in publishing, we see just how decentralized the very study of blockchain is today—much like the technology’s “decentralized ledger.”

Posth’s paper arrives at four points on how blockchain technology may work in the book publishing space:

And while Posth carefully sorts a selection of blockchain projects relevant to publishers—including the ill-fated Civil, reported on here by Laura Hazard Owen at NiemanLab—there’s another outfit working on blockchain and intellectual property, including book publishing, an ocean away from Spain.

This project is called Prescient. And it’s one of North America’s bastions of copyright protection, Canada’s Access Copyright, that’s behind it.

Access Copyright—better known to Publishing Perspectives as the agency responsible for collecting copyright revenues in English-language Canada during the years of the Copyright Modernization Act—has busied itself in blockchain research.

If you’re walking right into the blockchain jungle for the first time, schedule about 30 minutes to watch this webinar from Access Copyright, a session from October called “Blockchain 101 for Rights Holders.” You’ll find it has a lot to offer in terms of valuable concepts.

‘We Need To Be the Architects’

, Access Copyright’s CEO and president, has led the development of a wholly owned subsidiary called Prescient, which is described as “creator-focused innovation lab, dedicated to exploring the future of rights management and content monetization through” blockchain and other technologies.

“We feel quite strongly,” Levy says in an interview from her office, “that for the benefits” of blockchain and artificial intelligence technology “to truly come to creators and publishers, we need to be more of the architects of the upcoming interaction with digital content,” rather than being “the recipients of the technology, as we were with the Internet and its evolution. The only way is to get there on the ground floor at the early stages.”

It’s not necessary, Levy points out, for blockchain applications to involve cryptocurrencies.

“In fact, cryptocurrencies were the first use-case” for blockchain technology, she says. “But instead of a currency, a token, if you like, that’s being exchanged, it can essentially be anything. And in the use-cases that we’re playing around with, we’re dealing with books. We’re using the technology, then, to imagine the interaction between creators, publishers, readers, and so on.”

The Prescient project, like Posth’s set of blockchain components, has four key principles, which it describes as:

‘Patched Together With the Equivalent of Software Duct Tape’

Think of what Levy explains “the three A’s of smart content” to be. She tells us that:

Starting with the idea of a “fan-to-fan sale of a book,” the Prescient team imagined a case in which a reader sends a book he likes to a friend, and when that friend reaches a certain point, she’s required to make a payment to unlock the rest of the book.

The research included testing whether that recipient’s payment for the book would send the right portions of her money to “the publisher, the author, perhaps a percentage to the jacket cover artist, the photographer”—whoever is assigned to receive percentages.

“And we also asked what if the person who recommends the book also gets a reward for having done so?” Levy says. They named the recommending reader an influencer.

“The smart contract was real. And it worked. And it was really, really exciting.”Roanie Levy, Access Copyright

“It was done as a proof of concept in a sandbox.” Levy says. “The Web interface wasn’t pretty, it was patched together with the software equivalent of duct tape. But the smart contract was real. And it worked. And it was really, really exciting.

“We built this proof of concept in about two months, and we could see how this could change things and how the dynamics and relationships would evolve” in a system in which automated transactions were able to handle the purchase of a book and payments to all the proper people in that book’s value chain.”

And yet. “We also got pretty concerned at the same time.”

What Levy and her associates had discovered was that there’s a problem at this point. Harkening back to that irony mentioned earlier, it has to do with the decentralized nature of blockchain conceptualization, integral to the technology’s basis. 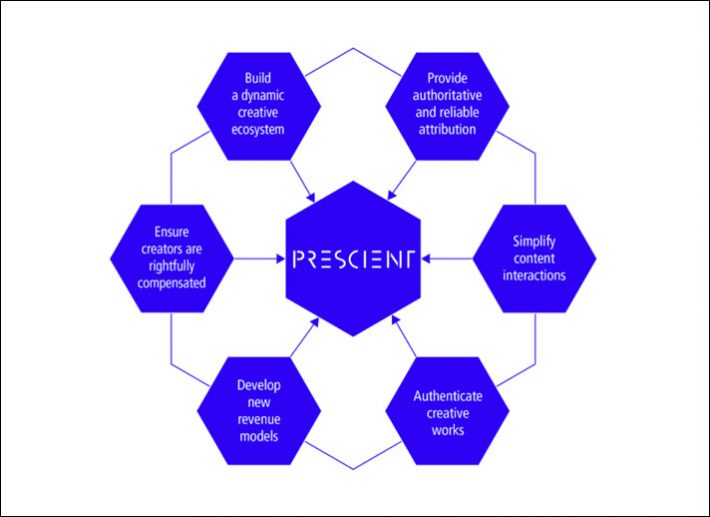 ‘Against the Promises of Blockchain Evangelists’

“We kept asking ourselves,” Levy says, “who’s going to make sure that the person claiming to be entitled” to profit from the smart contract “is the rightful owner? We realized that nobody was really addressing this issue in a satisfactory way.”

“The game of whack-a-mole that rights holders play now, where your book shows up as a pirated copy” on various sites? “That’s actually going to be on steroids in the blockchain ecosystem.”Roanie Levy, Access Copyright

Levy says, “This went against the promises that all these blockchain evangelists are talking about,” because the essential concept of a properly identified copyright owner isn’t assured.

“And the game of whack-a-mole that rights holders play now where your book shows up as a pirated copy on this Web site, you take it down, then it pops up somewhere else, and you’re constantly taking down your work—that’s actually going to be on steroids in the blockchain ecosystem. And it will be more difficult to find these works because it’s more difficult to find these bad actors.”

Levy adds that one of the great hallmarks of blockchain technology is that its ecosystem is dispersed, decentralized.

“And so it’s very difficult to pull something back. Money can move around, too,” from one virtual “wallet” to another, “and your wallet can be pseudo-anonymous.”

To address this issue, Levy and her Prescient colleagues have developed what they call an attribution ledger. This is the part of a blockchain/machine-learning ecosystem that would assign and identify ownership of a work to its author.

“The problem that needs to be solved,” Levy said, “is that attribution question. Anybody who wanted to offer smart contracts and wanted to make sure that this was done by actors who had the right to circulate” the content in question “would validate the content and the rights holder via the attribution ledger first. It would have public information that connected the content to the rights holder. And it would be used by digital service providers to validate and authenticate the content that circulated on their services.” 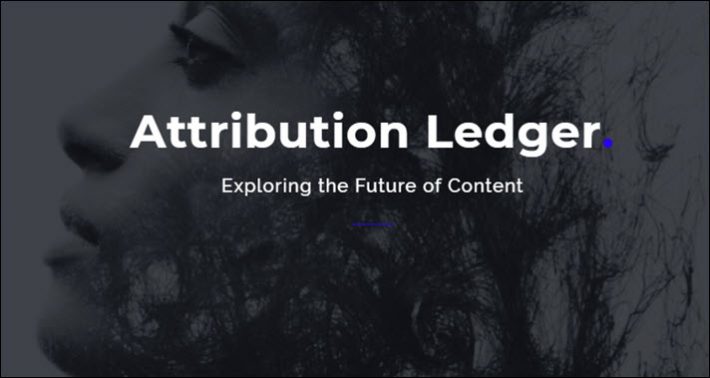 So the project going on now is the attempt to create such an attribution ledger. It’s not as easy as it might sound.

“We’re looking now to build an attribution ledger along with some initial services that would  help us understand what the ledger needs to do.”Roanie Levy, Access Copyright

“In order to create an attribution ledger,” Levy says, “it has to have services that actually use the ledger’s information. So it’s a bit of a chicken-and-egg problem.

“We’re looking now to build an attribution ledger along with some initial services that would  help us understand what the ledger needs to do, how it would interact with digital service providers, and this would help us also see the adoption of the ledger.” Levy says they’ve found that people get “really excited about the idea of fan-to-fan sales but they see the idea of the attribution ledger as kind of boring.”

Levy and Access Copyright’s Prescient team are now looking for partners as they work to make progress toward the needed attribution ledger in tandem with the fan-to-fan concept of a sale, she says.

“We’ve just launched an ‘expression of interest’ for technology partners to come help us build this. In terms of a loose timeline, Prescient would like to have a beta release of an attribution ledger by the first quarter of 2020.”

And many will appreciate that, as with Posth’s RENODO research, the Access Copyright Prescient team isn’t running on cheerleading energy. There’s a reality-based, copyright-grounded sense of responsibility in place, which is what book publishing needs to find the right opportunities in blockchain.

In fact, Levy says blockchain will not replace copyright because it will not eliminate piracy.

“In fact, if anything, it reinforces the need for an effective copyright regime.”

More from Publishing Perspectives on blockchain is here, on Access Copyright is here.