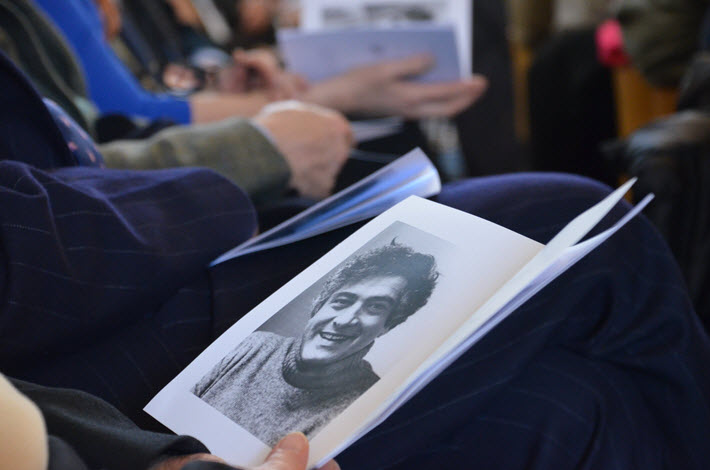 The late Peter Mayer is remembered as the man who made the Penguin Group ‘the world’s most admired and successful publishing company.’ 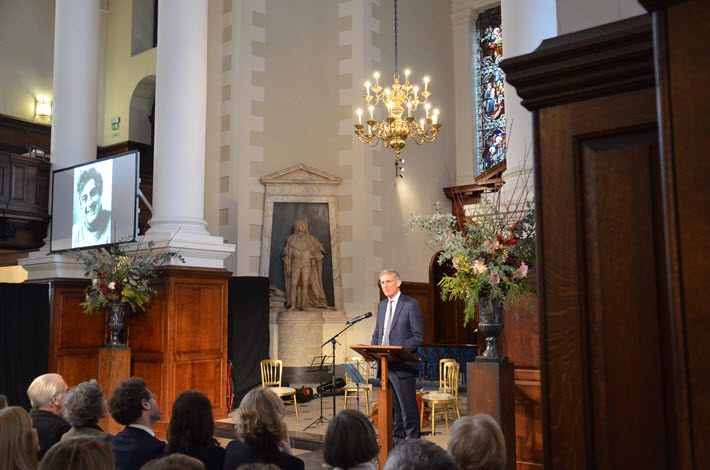 When Peter Mayer, the former chief of Penguin on both sides of the Atlantic, was honored at a well-attended memorial service at Christ Church Spitalfields in east London on Thursday (December 6), “visionary,” “complicated,” “energetic,” “courageous,” and even “sexy” were among terms used to describe him.

“The visionary who, more than any other, transformed English-language publishing.”Andrew Franklin on Peter Mayer

Mayer, the British-born American publisher died May 11. He was 82. In addition to his 19 years with Penguin, he also founded Overlook Press with his father.

Large black-and-white photos capturing Mayer’s charismatic good looks were screened on either side of the church transept, flanking speakers whose comments were interspersed with music from a string quartet.

Profile managing director Andrew Franklin said Mayer was “the visionary who, more than any other, transformed English-language publishing. He took a moribund, money-losing institution and turned it into the world’s most admired and successful publishing company.

“Penguin—the Penguin Group as he made it—became both hugely profitable and a global cultural force for good, with local publishing offices around the world. He created vertical publishing in the UK. Who, now, remembers auctions for paperback rights? He made B-format publishing ubiquitous and pioneered the trade paperback. He put colorful, commercial covers on books and raised prices to £3.99 or even more [US$5.10]. He set up Penguin India. 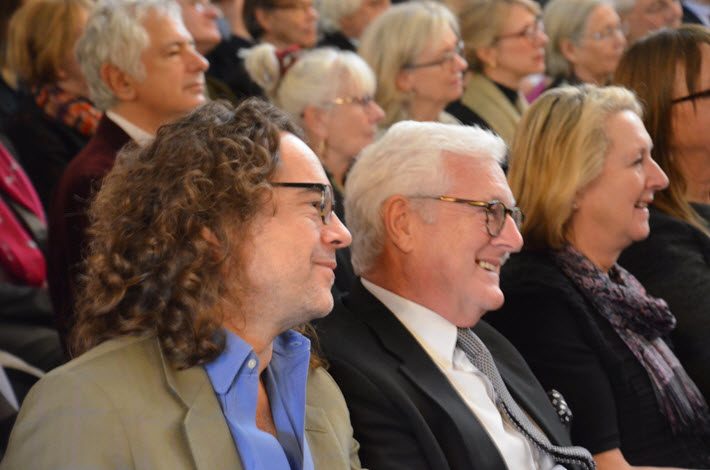 Mayer was born in north London’s Hampstead in 1936. His parents were both Jewish. His father Alfred was from Luxembourg and his mother was from Germany. They both spoke German, as did their son. He remained very much an international figure throughout his life, equally at home in Melbourne, Manhattan, London, or Delhi, and entirely, as Franklin observed, “classless”—happy slumming it or living in luxury.

His parents had moved to the UK in the early 1930s, and it was the outbreak of World War II that led to the family’s arrival in the United States.  The family was on holiday in the States when war broke out, and ended up settling in the Kew Gardens neighborhood of Queens in New York City—which seemed safer than returning to wartime Europe.

Mayer joined Avon Books in 1962 and stayed for 14 years. He rose to editor-in-chief and then publisher and famously rediscovered Henry Roth’s Call it Sleep, a title that would become a staple of Penguin’s Modern Classics list.

At Thursday’s service, his partner Sophy Thompson, publishing director with Thames & Hudson in the UK, read an extract from this title and reminded people of the chance way Mayer discovered the book.

“Peter was working as a cab driver at the time and one of the guys on the ramp said that he’d grown up on these streets and that they were caught perfectly in a novel called Call it Sleep. Peter didn’t know the book, but found it in the library and read it and liked it. He discovered that rights were held by a second-hand bookstore. He went to see them and in 1964 he published the book. Avon went on to sell more than a million copies. He was 28.” 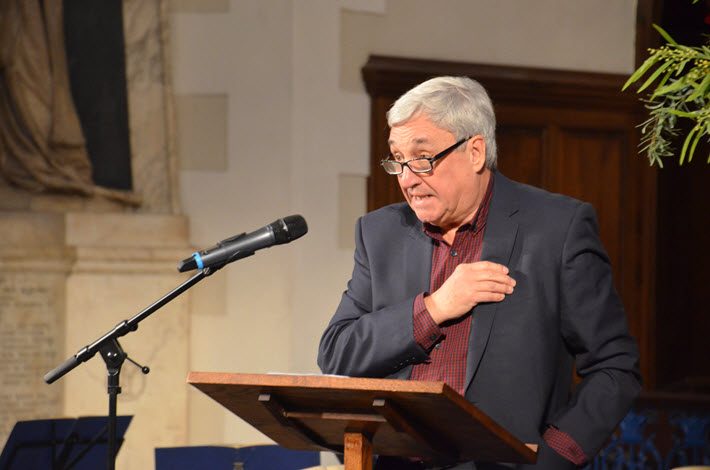 Among Mayer’s colleagues at the service were the former Penguin general managing director Helen Fraser, the former sales director Patrick Wright, and the former Viking publisher Tony Lacey, who made a thoughtful address that touched on the toughest part of Mayer’s career, his publication of Salman Rushdie’s The Satanic Verses. The book was published in paperback by Vintage, now part of Penguin Random House, in 1998.

“I was dismayed by some of the American obituaries in particular,” Lacey said, “which made it seem that this was his defining period. I don’t think that’s true. He had already achieved a spectacular turnaround in culture, in attitude, in morale, in size and indeed in profit before The Satanic Verses was published. And yet, and yet.

“All of us involved in the publication of the book had a tough time, but it was with Peter that the buck stopped. The responsibility he felt for the safety of the Penguin staff—not just in the UK but around the world, which depended on decisions he made—was a terrible burden.”

At the time, Penguin’s London offices had a permanent police presence outside and senior executives received threatening letters written in blood.

Lacey said, “The dilemma of whether to publish the paperback crystallized the burden, and it was a dreadful night when an incendiary device was thrown into Liberty’s front window [the London department store which had a book department in the 1980s]. Peter decided the paperback couldn’t be done. He was rightly proud of the fact that the hardcover never went out of print, and he was always careful to say that he wasn’t saying no to the paperback forever. Yet I can’t help but feel that the outcome was a permanent blow.” 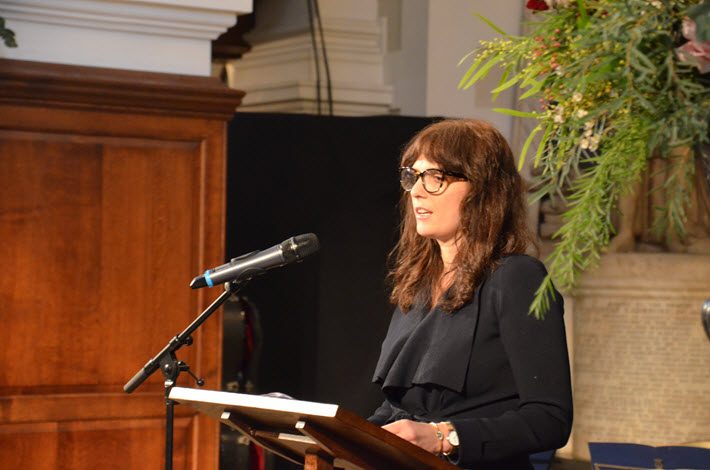 Mayer’s daughter Liese described her father as “an equal-opportunity friend-maker.

“It didn’t matter,” she said, “if you were young or old, rich or poor, sophisticated or uneducated. If you were curious and engaged with the world around you, and if you could put up with the smell of cigarette smoke, my father wanted to be your friend.

“Though we were both only children, he built for us a family of friends all around the world. In all the time and effort he put to keeping in touch, reaching out, showing up, he taught me how to build such a family of my own.” 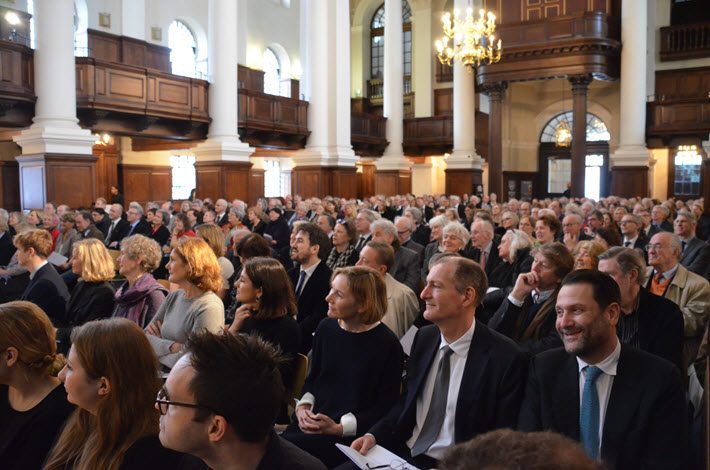 At the memorial service for Peter Mayer in London. Image: Roger Tagholm

More from Publishing Perspectives on Peter Mayer is here, and more on Penguin is here.