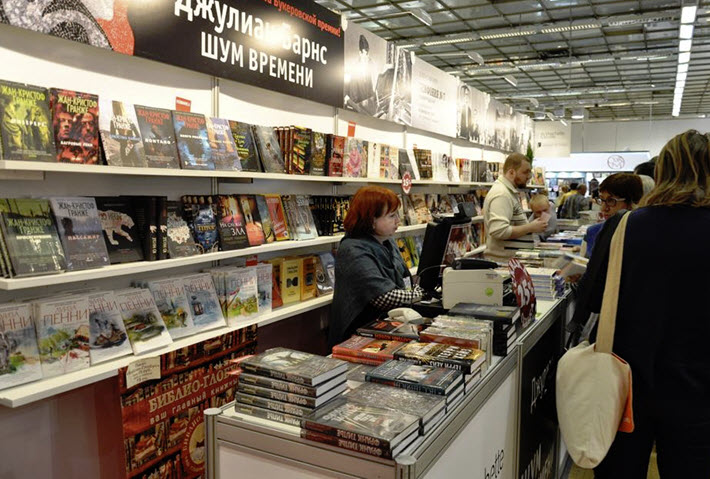 At the 20th Non/Fiction Book Fair in Moscow. Image: ExpoPark

‘Strong and Diverse’ Range of Titles

In its 20th year, Moscow’s book fair—Non/Fictio№ 20—has reported that some 300 publishing houses exhibited, a number that has held steady since our last report on the event, two years ago, in 2016.

Organizers tell Publishing Perspectives that the show this year at the Central House of Artists on Krymsky Val drew its target of some 30,000 visitors. The event is said to have featured more than 400 events during its run, which closed earlier this month.

Show officials say they saw a strong demand both for modern Russian writers and for foreign authors’ content. And they say the fair’s exhibitors included a larger than usual number small independent houses and younger authors, some presenting work to exhibition audiences for the first time.

Eksmo author and editor Dmitry Bykov was at the show, presenting both Burden of the Blacks and Polar Cucumber Song,  as well as the collection Marusya Was Poisoned.

Varvara Gornostaeva, chief editor with Corpus, one of Russia’s leading publishers of popular science and documentary content, tells Publishing Perspectives that, “This year, the majority of visitors came to the fair well-prepared, with lists of books  praised by various critics and journalists prior to the fair.

“And in contrast to previous years, the range of books we saw at the expo was strong and diverse.” 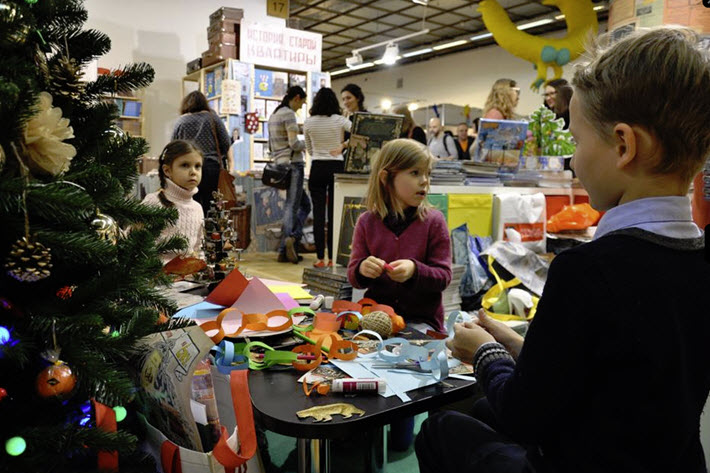 A dedicated children’s books and YA content area was part of this year’s Non/Fiction Book Fair in Moscow. Image: ExpoPark

Ekaterina Panchenko, a deputy director with Eksmo’s editorial division says she saw a rise in interest in domestic authors. “Despite the overall drop of demand for reading observed in Russia in recent years,” she says, “Russian readers still seem to want major, weighty novels.

“We see readers still ready to buy not only the classic 1,000-page read but also multi-volume series of books, particularly when they’ve had good press from critics and feature writers. This, plus a publisher’s strong name can drive sales” during book fair in Moscow, even today.

Another trend Panchenko says she noticed was the use by consumers of the book fair as a showroom—readers either “ordering a book online or in print directly from the expo.” A courier service was again offered by the fair this year for print purchases, delivering books either to a buyer’s home or to a nearby metro station. 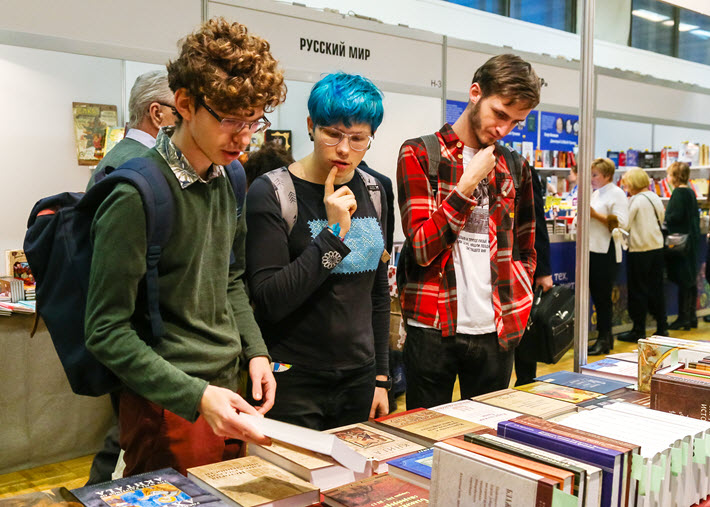 At the 20th Non/Fiction Book Fair in Moscow. Image: ExpoPark

Programming Highlights and Italy as Guest of Honor

Among the sessions presented was a conversation with author Dmitry Gluhovsky, whose increasingly political work—including his recent book Text, published by AST in 2017—led him to speak on “Storytelling’s New Era.”

Programming also included an exhibition, “The Best Book Design 2018,” from the Frankfurter Buchmesse and the German Book Office Moscow, featuring results of the competition from the foundation Stiftung Buchkunst that saw 729 entrants this year.

The fair’s guest of honor market was Italy this  year, and a large delegation of Italian writers was in place for the fair. The Italian Publishers Association’s (Associazione Italiana Editori, AIE) president Ricardo Franco Levi held an onstage conversation with Strega laureate Edoardo Nesi and Olga Strada, director of the Italian Cultural Institute in Moscow.

The show floor was divided into six sections, organizers say, each of which was dedicated to a genre, from history to cooking.

As at so many fairs, this one had a section dedicated to children’s books and YA content, including an area called the “Children’s Playground: Territory of Knowledge.” One of the highlights of programming for that space was a presentation of the new animated film and book by Julia Aronova, My Mother Is an Airplane (Samokat).

Sergey Naryshkin, chairman of the Russian Historical Society, tells Publishing Perspectives that the government’s emphasis on the development of children’s literature has helped generate new content in the sector.

In 2019, it’s reported that the 2019 Non/Fiction Book Fair will move to the Moscow Museum of Design exhibition center, the Manege, named for its original use as an indoor riding academy in the early 19th century. 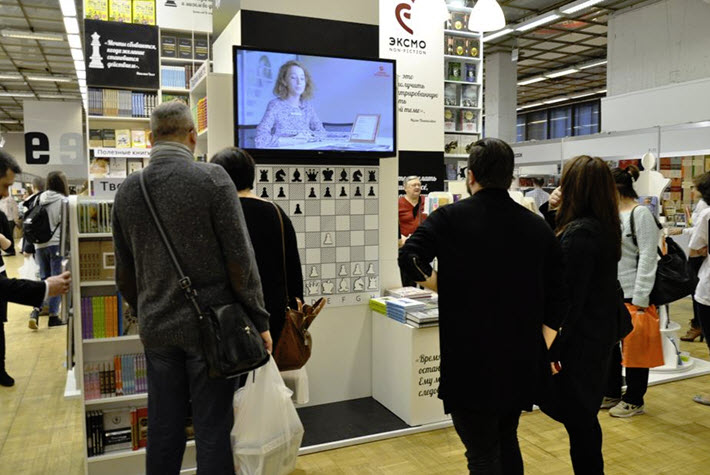 At the Eksmo stand at the 2018 Non/Fiction Book Fair in Moscow. Image: ExpoPark

More from Publishing Perspectives on book fairs overall is here, and more on fairs in Europe from the Aldus program’s new report is here.