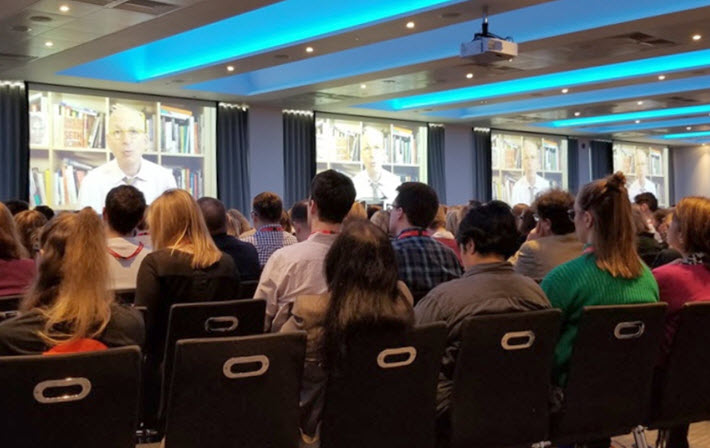 Brexit is set to take place at the end of March 2019. Will the UK’s FutureBook Live be able to call itself Europe’s largest publishing innovation conference next year? 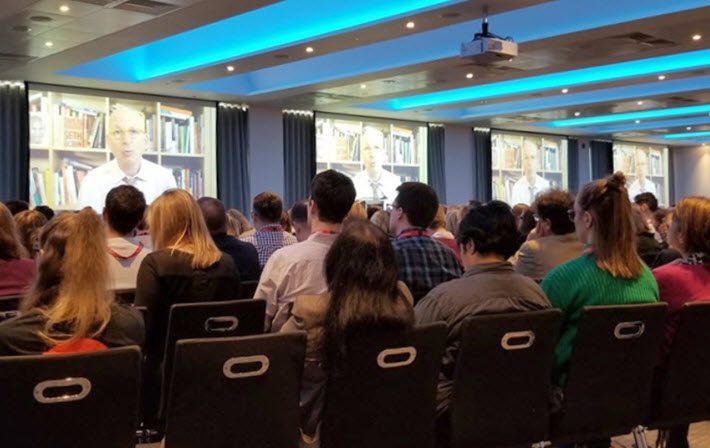 As hundreds gathered for the FutureBook Live conference in London on Friday (November 30), several points began coming into view that perhaps couldn’t be foreseen before the publishing industry reached the end of this year’s major conference schedule.

Devised as an annual season-closer, the FutureBook conference is positioned by The Bookseller to focus on the digital context of the publishing business that’s more compact in the UK and, in some ways, more easily sorted than are other markets.

Presumably next year’s FutureBook Live will be seated in a non-European UK—something both emotionally and economically hard to face for many in the business. So it’s understandable that a kind of pause might have been in place at Friday’s event. This was nothing tangible, but it gave the day a gentle tremor, the perfectly logical sense for how much is unknown about what the creative industries of the UK and publishing in particular may encounter after Brexit takes place on March 29.

The Publishers Association’s annual report for 2017 showed British publishing to be dependent on book exports for 60 percent of its revenues. Thus the impact of exiting the EU could mean a lot to this industry’s fortunes. It hasn’t helped that the government’s efforts to put together a plan for Brexit have been so contentious and inconclusive.

So fraught is the situation at the moment that The Wall Street Journal’s Laurence Norman is writing today (December 4) about the European Court of Justice’s opinion that the UK could “unilaterally reverse its decision to leave the European Union without consent of other members of the bloc.” If confirmed, this option could place a formidable barrier of potential—raising the hopes of many—in the path of the Theresa May government’s efforts to secure parliamentary backing for her deal.

“I feel that we now see ourselves as global publishers who happen to be domiciled in the UK, publishing books that appeal globally and reach consumers all around the world. “David Shelley

This uncertainty may have affected the UK’s annual FutureBook survey on the state of publishing innovation—the main point of the conference’s programming. This year’s conference, hosted by FutureBook associate editor Molly Flatt, was held in a unique, watchful moment in national and industry history. And if anything, this meant that there are fewer brand-new, hair-on-fire revelations on offer. More common were efforts to evaluate and unite behind key principles of an industry that needs to keep looking forward, of course, but prudently.

One of the most interesting and maybe telling developments in this market arrived in November 28, too late to be built into the day: the announcements that Penguin Random House and Hachette UK both are looking at placing offices in northern parts of the country—outposts beyond the citadel of London.

For more than a year, various industry players, some of them members of the Northern Fiction Alliance, have been arguing that too much of the industry’s control and activity is centered in London. With the messages of the Brexit referendum now a noisy ringing in the British ear, it’s interesting to see these major publishers look up and, maybe a bit anxiously, think aloud about how they may need the support of a wider home base than the capital has provided for so long.

Similarly, a curious but understandable division became quickly apparent in the day’s four opening keynotes, on Friday. And the most effective weren’t the two cataloging innovative developments (Muki Kulhan of Muki International and Tracey Follows of Futuremade) but the two talking about motives, rationales—the why more than the what of modern publishing. 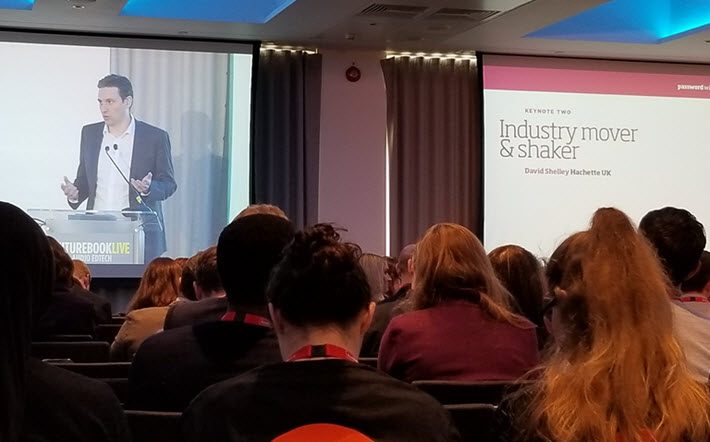 Hachette UK CEO David Shelley, for example, was the most successful speaker of the day to get at Brexit and its darkening mysteries.

In the past, Shelley said, “As trade publishers, I think it’s fair to say that we usually thought of the UK first” in terms of choosing books to publish “and then hoped that the rest of the world would like them.”

But “our mindset today,” he said, “has completely transformed. In trade publishing, as has long been the case in education publishing and academic publishing, I feel that we now see ourselves as global publishers who happen to be domiciled in the UK, publishing books that appeal globally and reach consumers all around the world.

“We no longer think and talk so much about ‘home sales’ and ‘export sales,’ but one global market—which obviously is associated with Brexit, believe me.”

While discussing audiobooks—which, like edtech have their own track of programming at the FutureBook—Shelley talked of how streaming and downloads not only have enabled the distribution revolution that has fueled audio as the one dependable growth sector for years in publishing but also the integrity of the content. The old cassette-tape delivery of audio required almost everything to be abridged, he reminded us, which wasn’t good for publishers, authors, “or readers—I mean listeners.”

In that catch between readers and listeners, Shelley had tipped us to something, though, that the industry isn’t talking about.

When Seth Godin spoke to the conference a few minutes later in a prepared video, he said, “You have to re-think what we’re here for and what is the change you seek to make.” He was talking about consciousness and its importance in guiding progress—a selection of the future of the book, perhaps, rather than bumping into it in the dark.

This would be briefly echoed later in the day when Pan Macmillan’s digital director, Sara Lloyd, asked her panel on new platforms whether the day might come when the print copy of a book would become simply the merchandise accompanying digital sales.

‘How Do We Make People Care?” 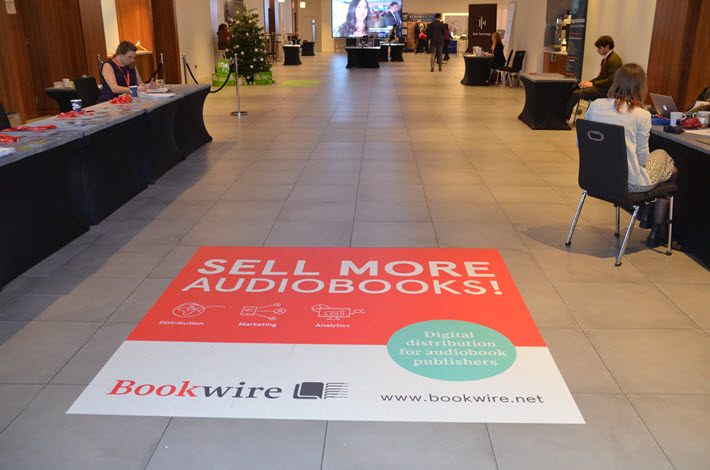 At the entrance to FutureBook Live 2018. And if it all goes to audiobooks, what happens to long-form reading? Image: Roger Tagholm

Underlying these comments is a question that Godin might recognize as one of choice and intention.

How comfortable is the industry delivering its content to Shelley’s listeners and Lloyd’s merchandise fans, if the actual act of long-form reading is a casualty in the process?

This is a different question from literacy, per se. The book business is terrific at supporting literacy charities and educational initiatives, scattering free books about for youngsters and adults and climbing onboard for reading campaigns.

But where are the consumer seminars on what it takes to read for hours? Where are the free symposia on the immersive/imaginative advantages to pursuing such an exercise? When do publishers and booksellers tackle the problem of an almost lost art that’s essential to the book world? Most people we’ve asked in publishing have said that they no longer read as much as they once did. And yet the industry keeps selling to a public it seems to believe is still ready for long-haul reading.

Best panel of the day goes to The Workplace in 2025 in which @SamConniff and @kikamiller called out the privilege we all hold and the complicity of the conference in maintaining this #Futurebook18 pic.twitter.com/0EylpOT3cL

It seemed to catch many at the conference by surprise that an afternoon session, “The Workplace in 2025,” developed a lot of energy in its discussion of, as Shelley had noted, an industry in which today, as opposed to the era of Martini lunches, “everyone works pretty hard.”

A “tier of fear” was outlined by serial entrepreneur Sam Conniff Allende, who told the audience, “Publishing has a ‘no’ reflex” that hinders its progress. The way to handle that, he said, is to do just what you wanted to do, and then say, “But I thought you said ‘go,’ not ‘no.'”

The panel pointed to a need for a mentoring culture and for understanding younger staffers as resource people, not trainees to be brought into line.

From the States, Sourcebooks’ publisher and CEO Dominique Raccah was on hand in a closing keynote to echo that, talking about “the ways that innovation requires a change in our culture and in our thought patterns.”

She described how her team’s buy-in at Sourcebooks has made possible the company’s strides, workers supporting each other in their commitment to expand and grow.

“Innovation,” she told the audience, “is figuring out what customers, readers, and authors think they need to have next.”

From the UK, Marcus Leaver, formerly of Quarto and now starting with Trigger, told Bookseller editor Philip Jones in his keynote interview that if he ever tries to take another company public, “Just take me out and shoot me.”

And Curtis Brown agent Cathryn Summerhayes spent the day speaking up as a champion of authors, noting how frequently the writers’ audio rights aren’t generating the revenue they should–for the authors–and how the market itself is a place in which “People want different ways of reading books, just as they want different ways of using social … The audiobook is no longer simply an alternative way to ‘read’ a book because of lack of time.”

But if listening isn’t reading—and if AR, VR, AI, and other tech developing around the form and delivery of storytelling are to be embraced and promoted by publishers—then do we understand what the core element of the industry, actually reading a book, is becoming? And is it what’s wanted? When was this decided? Will the people of publishing be content to lament the loss of the fundamental mmersive long-form exercise–reading a book–an act that’s quietly evaporating in the noise of audiobook headsets and fading in the glow of visual production?

The final event of the day in London was called “Rethinking Book Publishing 2018.” And as it turned out, The Bookseller‘s Molly Flatt had asked this key question at the top of the day as she opened the conference: “How on Earth do we make people care about what we do” in publishing—”and keep caring?” 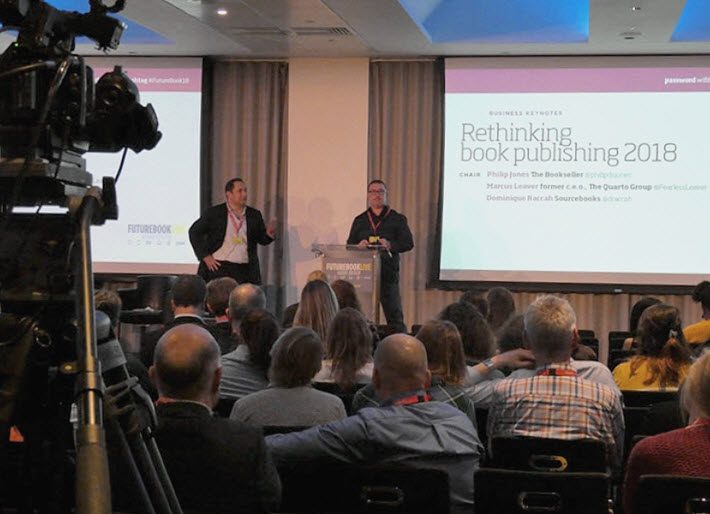