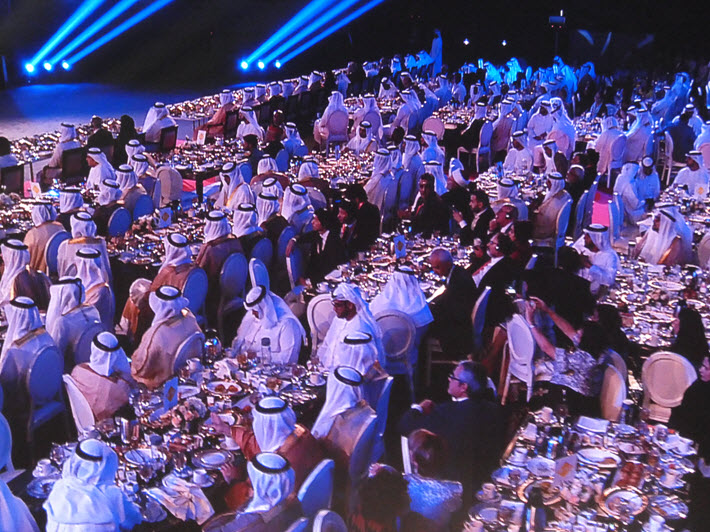 As the 2018 Sharjah International Book Fair has its ceremonial opening, the emirate’s royal family reaffirms its commitment to literature and a knowledge economy. 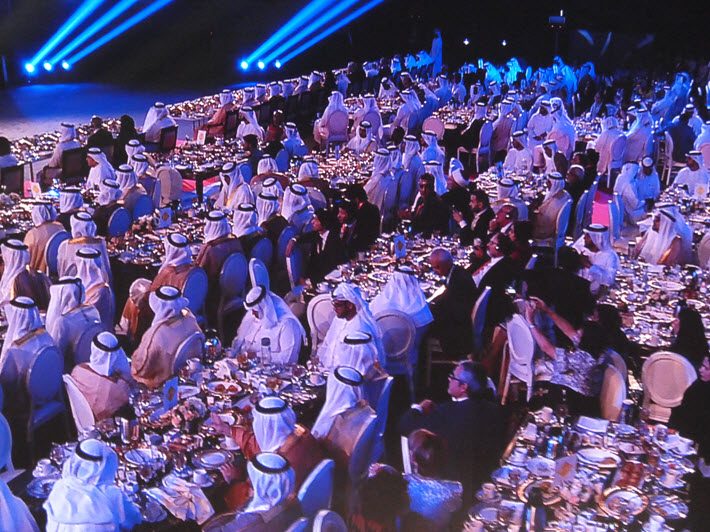 ‘The Love of Words’

Among the most compelling aspects of Sharjah International Book Fair is its annual snapshot of a culture steeped in tradition, yet presenting its goals with contemporary dynamics.

On Wednesday (October 31), the 37th iteration of the 11-day event was opened as it is each year with a presentation of literary awards by His Highness Sheikh Dr. Sultan Bin Mohammed Al Qasimi and the Sharjah Book Authority chairman Ahmed bin Rakkad Al Ameri in a breakfast ceremony with close to 2,000 invited guests in the cavernous ballroom of Sharjah Expo Center on Al Taawun Street.

Laser beams glowed, projectors etched white-hot images of the emirate’s landmarks onto the stage’s scrim, and an expertly produced video was shown in both Arabic and English, reminding everyone that among the Sheikha Bodour bint Sultan Al Qasimi‘s most promising achievements as a publisher and founding president of the Emirates Publishers Association is capturing the designation for Sharjah as UNESCO’s first Arab-region World Book Capital, in 2019.

Throughout the Expo Center’s displays this year, you find reminders everywhere of that UNESCO recognition, following this year’s stewardship of the honor by Athens. (Newly announced, Kuala Lumpur will take the baton from Sharjah as World Book Capital 2020.) 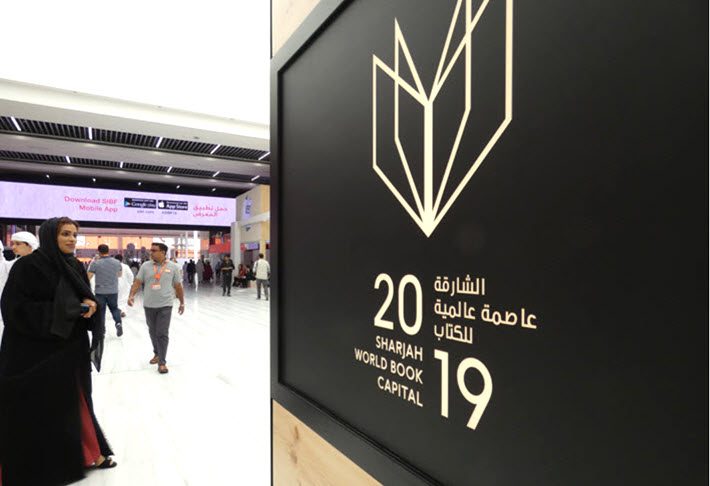 UNESCO’s designation of Sharjah as the first Arab venue to be named World Book Capital is at the heart of Sharjah International Book Fair this year, one of the Sheikha Bodour Al Qasimi’s most far-reaching achievements to date on the global cultural stage. Image: Porter Anderson

The only exhibitor given a central spot in the center’s main marble-floored entry concourse, in fact, is the bi-level World Book Capital stand: it’s impossible to miss its proud message.

“People don’t always seek the truth, but instead side with what they like to believe in, which may not be the truth.”Sheikh Al Qasimi

Sharjah’s book fair looks especially smart this year. Its design for 2018 is more cohesive, the major exhibitors’ stands such as those of National Geographic, the Sharjah Publishing City free trade zone development, and Guest of Honor Japan are given lots of room for the best optics, with the smaller stands fanning out across the show floors behind them.

The numbers this year are more impressive than ever, too. For example:

And even as he’s made his customary walk-around this year at the fair with his entourage—cutting a show-opening ribbon, browsing stands, speaking to exhibitors—Sheikh Al Qasimi has demonstrated again to the Sharjans how critical the royal family considers its knowledge-based economy to be. 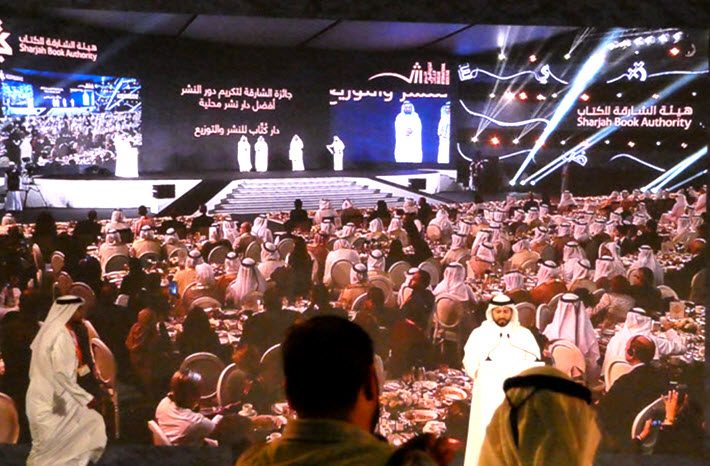 At the opening on October 31 of the Sharjah International Book Fair, this view includes a live speaker (foreground) backed by live camera images on a huge screen. Image: Porter Anderson

Among the UAE’s seven federated monarchies, Sharjah’s reading culture has been made fundamental to the distinctive character of the UAE’s third-largest emirate.

As the fair opened and the ceremony was rolling out Wednesday, delegates to the professional program and its conference were sitting in on a unique conversation, one that this aristocracy and its government have consciously chosen to have with Sharjah’s population. 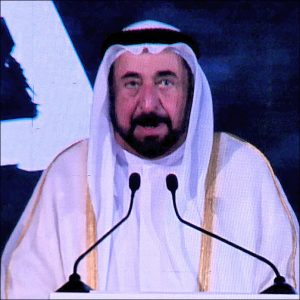 “In 1979,” Al Qasimi said to his audience Wednesday, “I launched an appeal to stop building concrete structures and start building knowledge and culture.

“In 2019,” when UNESCO’s recognition arrives, “it will be 40 years since the appeal. When we look back, we can see that we have built a 40-year legacy of giving, and of exceptional cultural achievements.

“I can never take the sole credit for this. I say ‘we’ have achieved everything together, and I would like to once again thank you all for your contributions to [this] 40-year journey and success in enlightening the human mind.”

In a comment near the end of his remarks, the emir also seemed to touch on the ideological divides growing deeper in many parts of the world’s political contexts. Specialists today in publishing, journalism, socialism, and academics are debating the echo-chambers of information and communication that trap too many readers in comfort-zone bubbles of familiar input, socially mediated repetition, and corrupt leaders’ rabble-rousing depictions of various news media as “enemies of the people.”

“People don’t always seek the truth,” Al Qasimi said, “but instead side with what they like to believe in, which may not be the truth. This way, the truth is often neglected.

“I say to such people–look carefully: the truth is right there.” 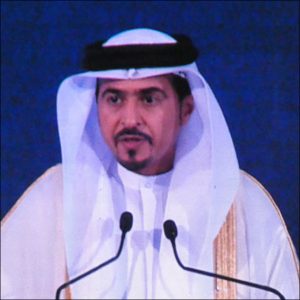 Sharjah Book Authority’s Al Ameri spoke from the stage, too, positioning the book fair as “a celebration of the Emirati and Arab cultures and a message from Sharjah and the UAE to the world about the beauty of the language of the mind.”

So eloquently phrased are such remarks on these occasions, of course, that they can sound—especially in the racing effort of a simultaneous translator trying to keep up—like mere ceremonial poetry, formal, heartfelt, but primarily decorative.

And yet, what’s being said at these moments in Sharjah is exactly what careerists in literature and publishing know to be the essence of what both the art and the industry offer.

These are the bookish values that we all know are threatened by waves of energy newly destabilizing Germany’s leadership this week and sorely testing the United States electorate’s resolve in the coming midterm elections of Tuesday (November 6). From Brexit to Brazil, nativism and populist lies are shrinking the international arena of ideas and inquiry.

“The love of words,” Al Ameri said, “can unite humanity in one place where there is no room except for good.

“This message illustrates that knowledge is not a coincidence.

“It’s the product of the constant accumulation of effort throughout human history—a result of people’s wisdom and farsightedness.”

Operating as all public-facing book fairs do on multiple levels to serve many attendees, the Sharjah fair this week is noisy with that wisdom Al Qasimi and Al Ameri are naming: school kids are dashing around, exhibitors are getting acquainted, books are changing hands.

‘Knowledge Is Not a Coincidence’ 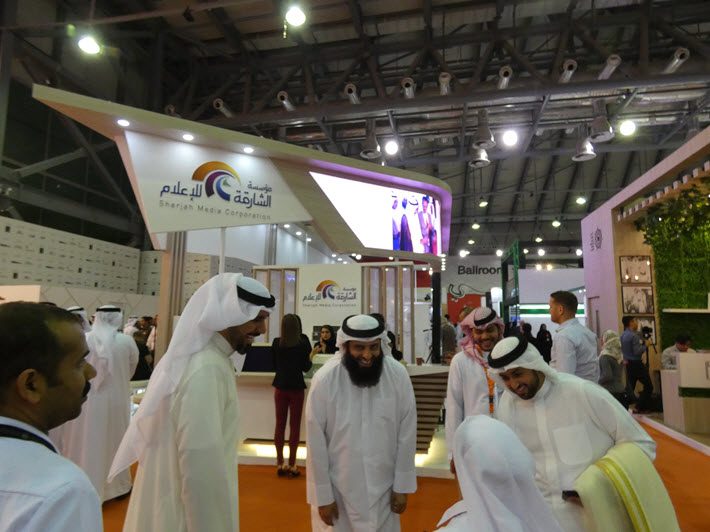 If the show’s organizers devise the opening ceremony to look something like a Hollywood celebrity fundraiser, that opulence is proof of performance in this part of the world. It’s a pledge, a commitment, an earnest promotion of books, of the habit of reading them, of the currency of writing them as the prolific Al Qasimi does, himself.

“The love of words can unite humanity in one place where there is no room except for good.”Ahmed Al Ameri

And what sometimes looks “over the top” and showy to some of Sharjah’s first-time professional program invitees is actually an unabashed cheer for what storytelling is, a narrative easily lost in publishing’s necessary daily focus on profit and loss, distribution and distractions, format battles and genre labels.

Sharjah’s shows and writing awards make sense together because this is a population of about 1.5 million people who are being told by their most iconic, revered leadership that, in Al Ameri’s words, “The book is a window to our past, present, and future.”

Outreach is part of this. Wednesday’s awards included a translation prize, the 1.3 million dirham (US$354,000) Turjuman Award, to Actes Sud, the French publishing house, for its francophone translation of The Nature of Despotism by Syrian author Abdul Rahman Al Kawakibi.

There are presidents who refuse to read books, and those heads of state are running much larger and older nations than the 47-year-old UAE today. Thinking people who suffer such boorish leadership are miserable.

Watching the unapologetic exuberance of this gala celebration each year, it’s hard not to wonder why more societies haven’t learned to stage such moments, to come together under computer-driven spotlights as this readership does to cheer the purpose and potential of language and literature.

And when it comes to writerly placement of literature and knowledge in a tired world’s struggles for mutual respect, don’t let Sharjah’s lights and music fool you: they’re not just for show.

This is an authentic, four-decade consecration of an entire state’s self-definition as a place of thought, of  learning, and of the grace of knowledge.

There’s a lot to be learned from these Emirati in Sharjah. 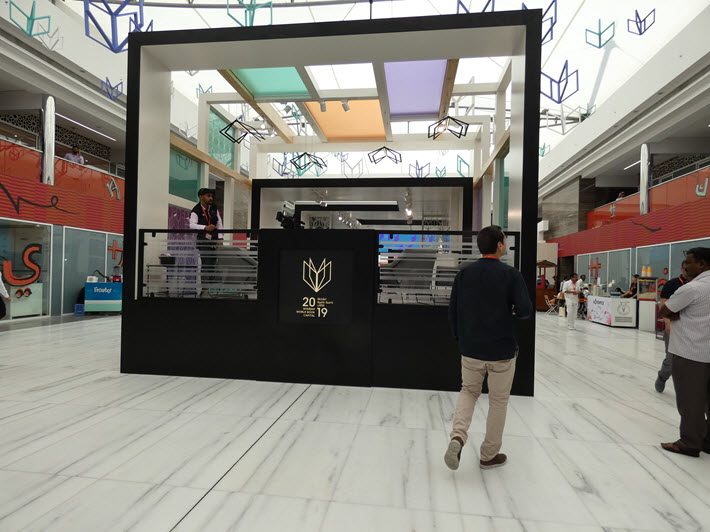 The 2019 World Book Capital stand on the 2018 Sharjah International Book Fair exhibition floor. Notice the three-dimensional evocations of the program’s logo ‘flying’ above the stand, a symbol of Sharjah’s collective intent to spread its joy in literature to the world at large. Image: Porter Anderson

More from Publishing Perspectives more on developments in Sharjah is here,