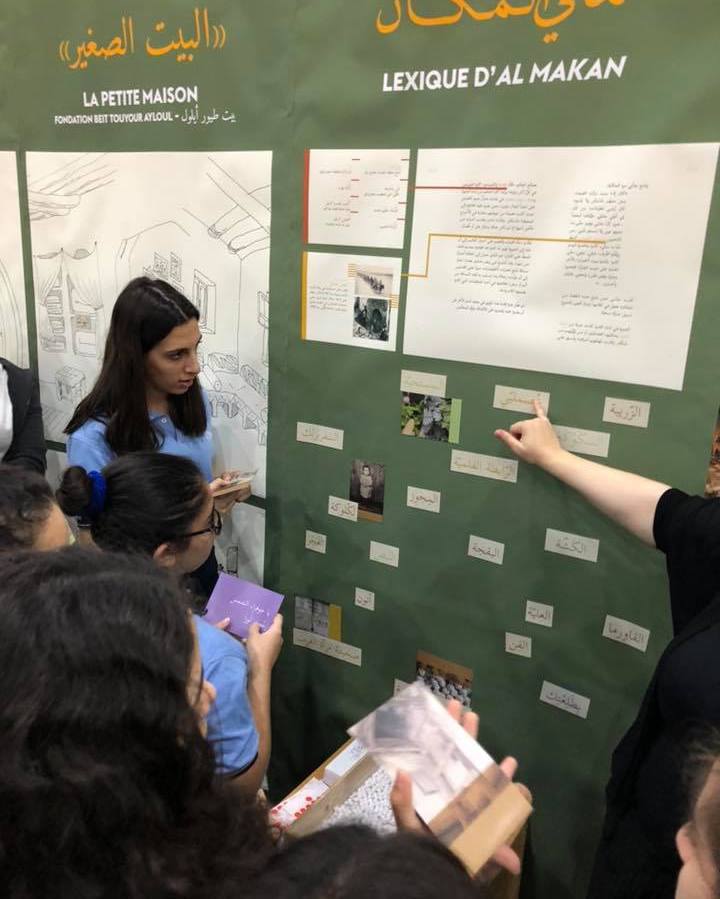 ‘We’re driven by a love of what we do,’ Dar Onboz’s Nadine Touma says, as the Lebanese publishing house pursues its concept of ‘books as a tool for change.’

Their attendance isn’t a given, because Dar Onboz (The House of Hemp Seeds) publishes books in Arabic, and the fair’s books are mostly in French. But this is Lebanon, where books in Arabic, French, and English are the norm.

Visitors stopped by the Dar Onboz stand to admire the books’ original designs, while children participated in workshops.

“We kept hearing, ‘Oh my god, books in Arabic can look like this?’” says Nadine Touma. “You have people at the French book fair who wouldn’t normally go to an Arabic book fair, and it was interesting to break this impression that books in Arabic are boring or ugly.”

‘We Believe Our Books Stand Alone’ 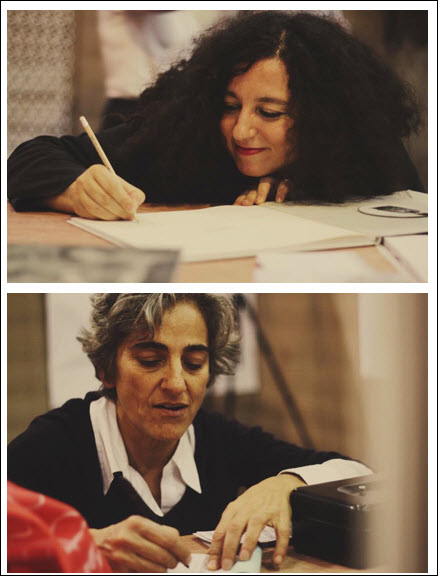 When Touma and Sivine Ariss founded the press in 2006 with graphic designer Raya Khalaf, they wanted to make beautiful books for children that celebrated the Arabic language, as Publishing Perspectives reported more than eight years ago.

Artists, filmmakers, storytellers, performers, and musicians, Ariss and Touma, 12 years after the inception of the press, continue to make books that encompass their vision, as Touma puts it, “pedagogical, driven by an aesthetic design, and in the Arabic language that we love.”

The company’s titles sometimes include books for adults, such as this year’s Al Makan (The Place), the memoirs of the late author Emily Nasrallah, known for her profound attachment to her village in southern Lebanon.

The project was a perfect fit with Dar Onboz’s way of doing things. The book, an object in itself, became its own ecosystem, working first as a memoir with its roots in the history of a small village in Lebanon—details about everyday customs, social interactions, and economic immigration. 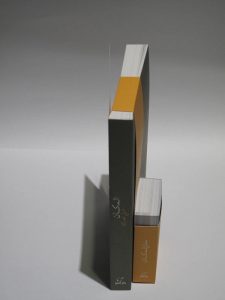 Nasrallah’s memoirs were printed with the trademark Dar Onboz attention to design and include photographs, infographics, maps, and a small lexicon. Because the vocabulary in the memoirs often refers to a bygone way of life, each word that might not be known by a younger generation is highlighted in red and referenced in the lexicon, citing food, a way of dress, a plant or flower, or a detail of architecture.

Dar Onboz completed the production with a short video of Emily Nasrallah being shown the book several days before her death. During the Beirut book fair, Dar Onboz’s stand had an immense poster of the cover of Al Makan with a timeline and cast of characters as well as a map showing patterns of emigration from Lebanon to other countries. 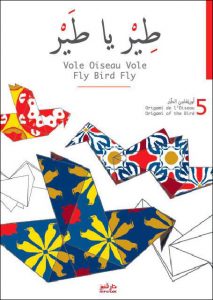 Although a publisher, Dar Onboz is really a platform for storytelling, using many forms of contemporary art to retell folklore and fables, but also public service issues. The lexicon accompanying Al Makan is reminiscent of Hamdara (Feast), a film made when Dar Onboz launched, intended to sensitize children to nature, seasons, and the food their grandmothers made.

In 2016, Dar Onboz published a series of large-format books called Fly, Bird, Fly, in Arabic, French, and English. The books evolved out of a project of the same name designed to focus attention on the protection of  local and migratory birds. In the books, children can color images, cut out their own birds, make shadow puppet shows, or stencils.

Touma says, “It’s so important to showcase works from areas that are stigmatized. We don’t necessarily have to talk about war, poverty, veils, and girls’ hymens. We have great content here, and brilliant artists.” 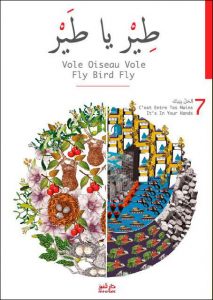 Touma says that because she’s a publisher from the Arab world, her books are expected to be culturally representative. “I’ve been asked, ‘What’s Arab about your publication?’ We believe our books stand alone. [Readers] don’t have to go to a foundation or an NGO for people learning Arabic—that’s what translation is all about.”

Dar Onboz did sell the award-winning atmospheric graphic novel City Neighboring Earth by Jorj A. Mhaya to the French publisher Denoël, but this was a first. Very often, says Touma, “Arab publishers put themselves out there as buyers, not sellers.”

There’s been an interesting shift in the children’s publishing industry in Lebanon, however, Touma says. “There’s a huge interest in children’s literature because there are needs and now there are also awards.”

Touma is referring to the UAE-based Etisalat award and the Sheikh Zayed award for Arabic children’s books. These awards, however, require that books be published in the formal and mainly written Modern Standard Arabic (MSA), and Dar Onboz frequently publishes in colloquial Arabic, which is regional and used in daily interactions.

“Publishing in colloquial Arabic is complementary for us, and enriching. We feel it lessens the dichotomy that kids feel,” Touma says.

The question of whether to publish children’s books in MSA or colloquial Arabic is explored by Reem Makhoul in ArabLit, in which she writes, “When I was growing up I couldn’t relate at all to animals or cartoon characters speaking formal Arabic to me in books or on television.”

‘We See the Impact Daily’ 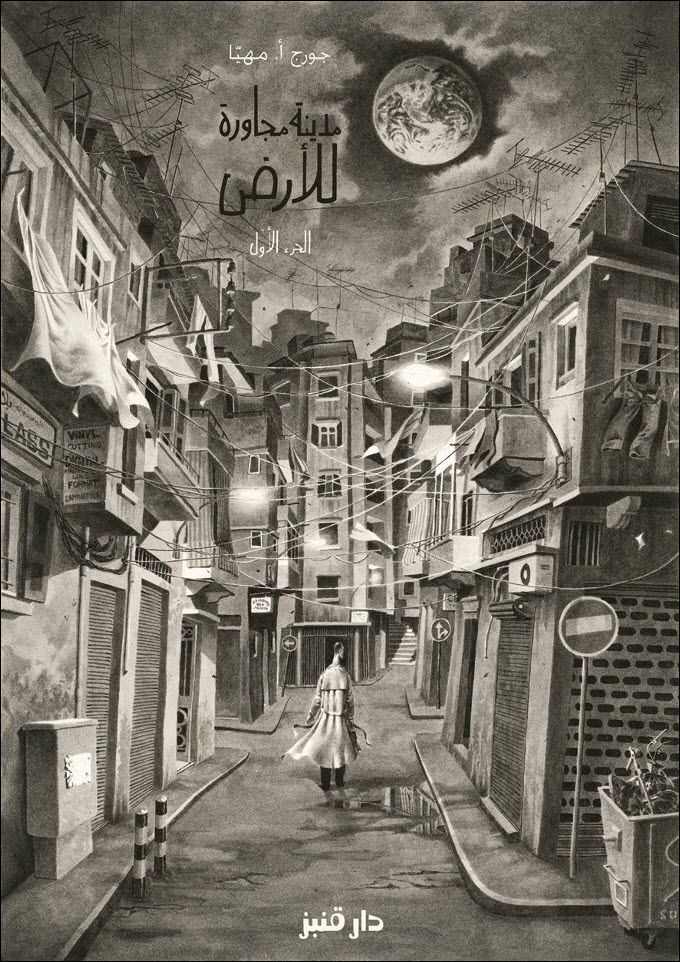 There’s also an additional problem of how Arabic is taught in schools, according to Touma.

“In the school system, the way to learn Arabic remains archaic and it is difficult to learn. There’s also a certain disdain for the Arabic language. Private schools here [in Lebanon] are mainly in French or English. But spoken Arabic has so much humor, rhythm, and imagery. Learning Arabic can become more fun.'”

For most publishers in the Arab world, distribution is another challenge. Touma says that participation in book fairs is the most efficient way to sell her company’s books outside of Lebanon, “It’s the only way we can have our books showcased in the Arab world,” she says. 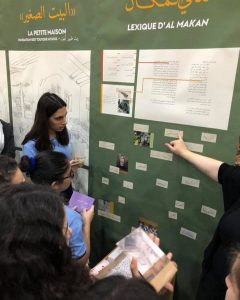 Getting Dar Onboz’s books to Europe and beyond is even more complicated because of the cost of shipping. The  books used to be at the Arab World Institute bookstore in Paris but since the Beirut bookstore that took care of shipping the books for them closed down, they haven’t found a replacement. “There’s no lack of demand,” says Touma, “which makes it even more frustrating.”

Dar Onboz will be at the 2019 Bologna Children’s Book Fair (April 1 to 4), where in the past the company has had honorary mentions and an Opera Prima award (2012).

For now, Nadine Touma and Sivine Ariss say they toil on a “microlevel” where, “We see the impact daily, with email and phone calls from parents and readers. We’re driven by a love of what we do.

“Honestly, if you scratch a little, underneath we are two profound activist dreamers.”

More from Publishing Perspectives on Arabic literature and markets is here.