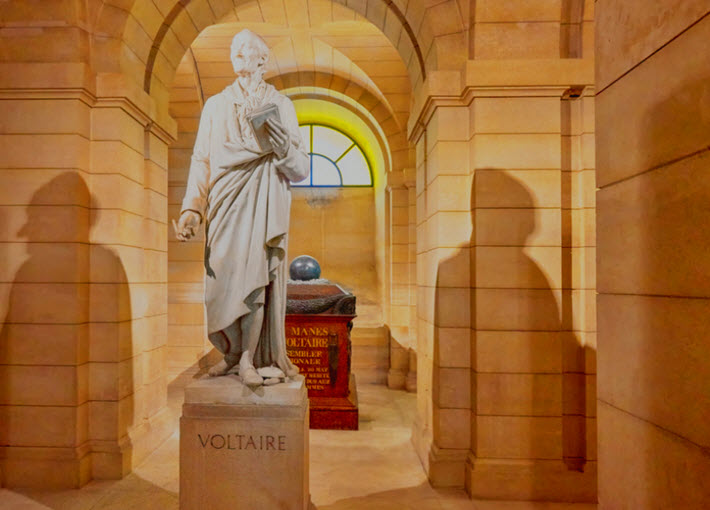 Honoring publishing courage in the face of oppression, nominations for the IPA Prix Voltaire Freedom To Publish will close on February 20.

Voltaire’s statue and remains at the Pantheon in Paris. Image – iStockphoto: Vitaly Edush

‘So Many Brave Publishers Out There’

In a climate of such intense political dynamics in so many parts of the world, the 2019 IPA Prix Voltaire from the International Publishers Association (IPA) is likely to generate even more speculation, conversation, and, perhaps, nominations than ever before.

At 8 am. today (November 21) in Geneva at IPA headquarters—near Ferney, Voltaire’s home for several years—the organization’s Freedom To Publish Committee chairman Kristenn Einarsson is issuing the call for nominations.

Publishing Perspectives readers are familiar with the program as its profile has risen in recent years with the prominence of the prize’s honorees—most recently the Swedish national bookseller Gui Minhai, long detained in China, and given the Prix Voltaire in February at the IPA’s World Congress in New Delhi.

Another familiar face from the Prix Voltaire program is that of two-time nominee Azadeh Parsapour, who recently received the Association of American Publishers’ freedom-to-publish award and spoke with Publishing Perspectives in Sharjah about her work in publishing censored content from Iran.

The prestigious award is conferred in recognition of “exemplary courage in upholding the freedom to publish and enabling others to exercise their freedom of expression.”

The freedom to publish has become one of the two fundamental pillars of the IPA’s policy brief—the other being threats to copyright and intellectual property rights.

Details of the Nomination Process

The IPA Prix Voltaire laureate receives 10,000 Swiss francs (US$10,051), funded by a range of publishing community entities, both corporate and organizational.

Nominees will have recently published controversial works amid pressure, threats, intimidation or harassment. Alternatively, they may be publishers with a distinguished record over many years of upholding the freedom to publish and freedom of expression.

Nominations are to be submitted by email using the application form to the IPA at prix-
voltaire@internationalpublishers.org.

‘For Those Who Are Kept Silent’

In a prepared statement on the announcement of the new nominations round, IPA’s president, Michiel Kolman, is quoted, saying, “It has never been clearer why the freedom to publish stands alongside copyright as a pillar of the IPA’s work.

“It’s the international publishing community’s duty to support our colleagues risking their lives for their freedom to publish and for whom enforcing their copyright can only be an afterthought.

“There are so many brave publishers out there, let’s shine the light on them.”

And Einarsson, as the lead on the committee is quoted, saying, “The freedom to publish is increasingly under threat. Strong publishers enable thoughts of authors that challenge the status quo to reach an audience.

“Promoting the inspirational stories of those publishers that becomes Prix Voltaire laureates, who continue to do this in the face of legal and sometimes physical intimidation is essential so that others can follow their lead.

“We also have to work continuously for those who are kept silent.”

Sponsors of the IPA Prix Voltaire, 2019

Those interested in becoming sponsors of the IPA Prix Voltaire are asked to use this email address: voltaire@internationalpublishers.org