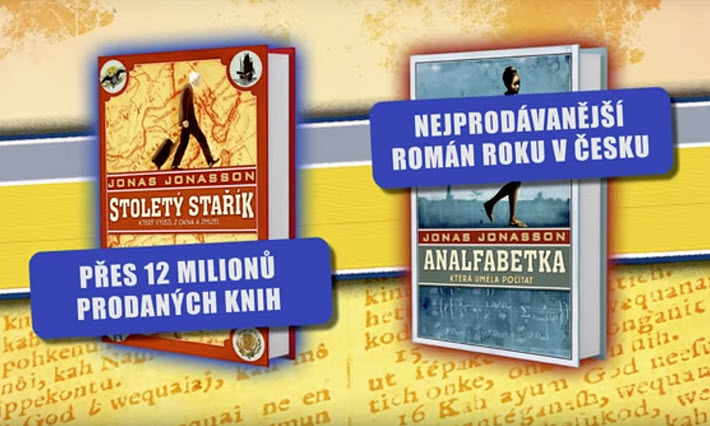 The expansionist drive at Prague’s Albatros Media continues with the company’s acquisition of Panteon, a press focused on adult fiction. 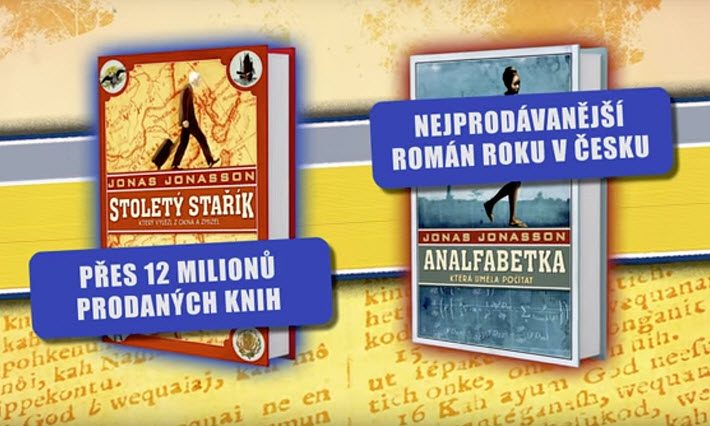 Image: From a video trailer at Panteon for Jonas Jonasson’s books in Czech translations

The Czech publishing group Albatros Media is continuing its acquisition drive with the purchase of Panteon, a publishing house focused on adult fiction. Panteon holds the rights to the Czech editions of Swedish author Jonas Jonasson’s bestselling books.

In the Czech Republic, Jonasson’s The Hundred-Year-Old Man Who Climbed Out the Window and Disappeared has sold more than 150,000 units, considered an exceptional tally for the country of some 10.6 million people. In February, Panteon is scheduled to publish the book’s much-awaited sequel, The Accidental Further Adventures of the Hundred-Year-Old Man, as has been reported by local paper

Albatros’ senior management is asserting that the acquisition will enhance its adult fiction portfolio, while declining to disclose the cost of buying Panteon.

“Panteon concentrates mainly on adult fiction books,” Albatros chief Václav Kadlec tells Publishing Perspectives. And adult fiction, Kadlec says, is the segment of the market on which his company has placed its primary emphasis.

“One of Albatros Media’s strategic targets,” he says, “is to increase our market share on the adult fiction market, and that’s the reason Panteon is a perfect fit for our portfolio. Jonas Jonasson’s books are extremely popular in the Czech Republic.”

That said, the adult fiction focus could be considered a departure because Albatros Media remains the Czech Republic’s leading children’s books publisher.

As Publishing Perspectives readers will recall, Albatros in April took over Vyšehrad, the oldest publishing company operating in the Czech Republic.

In 2016, the Prague-based group had consolidated its position of the country’s leading children’s books publisher by taking over the Czech presence of Denmark’s Egmont, its leading rival in the country’s market. At the time of the Vyšehrad transaction, Albatros was estimated to hold a stake of about 17 percent in the Czech wholesale book market, as reported by Chris Johnstone at Radio Praha.

Asked whether this new acquisition will allow the publishing group to benefit from synergies in operational costs and revenues, Kadlec says the Panteon purchase is a way to leverage Albatros’ growing experience in takeovers.

“Albatros Media has completed 13 acquisition projects over the past seven years,” he says, “and most of our acquisitions are based on strong synergies.

“Our general acquisition approach is to tightly integrate the acquired company with our own. We look to generate as many economies of scale as possible, and are usually able to find several areas allowing us to reduce costs, such as in printing, accounting, logistics, and other operational areas, as well as in parts of the business than can boost our revenues.

“We always discontinue an acquired company’s agreements with distributors, so we can transfer a new company’s list to our own sales team, for example.”

Established in 1949—and a co-founding press in 1964 of the Bologna Children’s Book Fair—Albatros now has 15 imprints in books for children, YA and adults. The company describes itself as the largest publishing group in the Czech market, and it continues to widen its footprint in the Slovakian market.

In addition to its acquisition of Panteon, the group’s imprints include Albatros, best known for children’s titles, CooBoo, which publishes YA content, Plus, which is centered on literary work for adults, Motto, a commercial mix, and other fiction imprints along with nonfiction lists including Edika, BizBooks, CPress, Computer Press, and Management Press.

So it is that Albatros Media’s portfolio—with an output of some 1,500 titles annually—includes JK Rowling’s Harry Potter books, The Little Prince, and the Star Wars books.

Within the adult fiction segment, the publisher owns the rights to the Fifty Shades of Grey series, JK Rowling’s The Casual Vacancy, and books by the Norwegian bestselling crime novelist Jo Nesbø, among others.