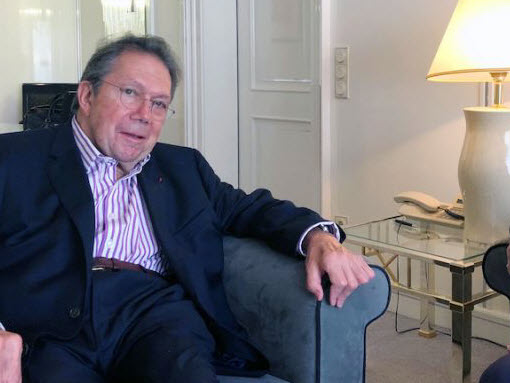 After six decades in publishing and 13 years on Frankfurt’s Advisory Board, French publisher Alain Gründ talks about his family’s publishing legacy. 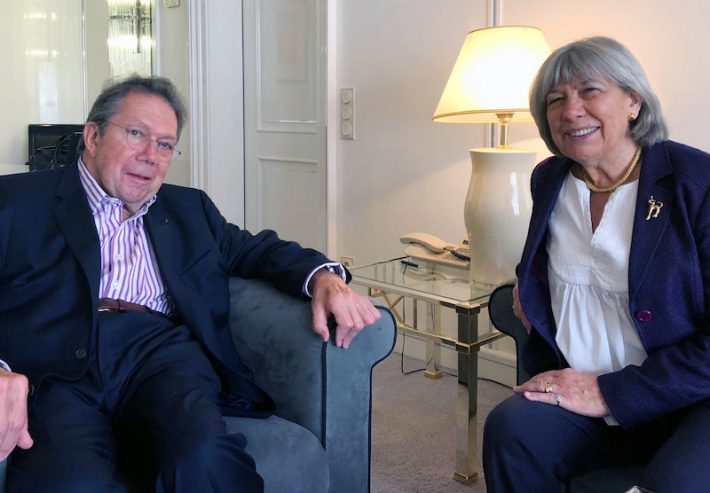 The city of Frankfurt and the book fair are, figuratively speaking, in Alain Gründ’s DNA–both professionally and personally.

His great grandfather moved in the 19th century from Frankfurt to France where his grandfather, Ernest, was born. Ernest went on to establish the Gründ publishing house in Paris in the early 20th century.

Alain Gründ, who took over his grandfather’s business from his father in 1963 has been going to the Frankfurt Book Fair since 1958. After being on the fair’s advisory board for 13 years, he submitted his resignation this year.

Sixty years is a good amount of time to observe the book industry and to have survived the ups and downs of his own publishing company, which Gründ sold to Editis in 2007. But back in the 1950s, Gründ says he wasn’t necessarily interested in going into the book business.

“The bankers wanted me to fire my father. But of course, I didn’t. It took me ten years to get the publishing company back on its feet.”Alain Gründ

“I didn’t really want to be involved. But I had to be, because my father had decided he was going to pass the torch on to me,” said Gründ, in an interview with Publishing Perspectives.

To return to Gründ’s grandfather, his publishing house had first specialized in art books and re-issued books that were out of print. When Gründ’s father Michel and his brother Jacques took over the business in the early 1930s, the brothers had very different ideas about how to continue running the company.

“Jacques had the temperament of an industrialist,” said Gründ. “He was the first French publisher to place paperbacks in department stores like Prisunic and Monoprix. He sold a series of classics for one franc in 1936.”

But Jacques’s untimely death in 1939 meant that Michel’s interests took over, which were far less business-oriented and more focused on art books and niche subjects. One of Michel’s passions lay in the Bénézit dictionaries, a comprehensive source of artists’ biographies that had started in 1911 but were abandoned by the original publisher.

Éditions Gründ went on to publish further editions, and Alain Gründ continued to publish Bénézit dictionaries until 1975, when he had to renegotiate the contract with the heirs, which lasted ten years. Once the contract was renegotiated, said Gründ, “the story finished gloriously when I finally published 16 volumes and even English editions translated by specialists. The English publication in 2006 was a complete failure, because our clients had already moved on to digital.”

Oxford University Press acquired the Bénézit dictionaries in 2010 and has since developed an online version.

When Gründ was still a student, he took night classes and worked at the publishing company during the day. He received a grant to study in the US and went to the Wharton School, where finance was not a favorite subject, but he did like sales management. This boded well for the future.

When he returned to France he was immediately drafted in 1962 to Algeria, where the Algerian War for independence was just winding down. “It was a trying and overwhelming experience,” said Gründ. “It forges one’s character.”

Meanwhile, the family business was not going well.

‘Lots of Ideas on the Editorial Side’

“My father wasn’t a good manager, and he was very badly advised. The chief accountant and the sales manager were each worse than the other. In April 1963, I found that my father was at the head of a business that was going bankrupt. I agreed to take the reins. The bankers wanted me to fire my father. But of course, I didn’t. It took me ten years to get the publishing company back on its feet.”

Gründ set up a sales team with representatives working for several publishing companies. Things began to take off when Gründ began co-editions with a Czech publishing company called Artia, which was a wellspring for talented illustrators. Gründ’s father Michel worked on this collaboration.

“My father had lots of ideas on the editorial side, he just wasn’t an organizer,” Gründ noted. “The Czechs would come up with illustrations and stories, and we would translate them into French. They understood that we were pushing their productions like no one had before. It was a funny collaboration with dissident artists and the Czech regime because Artia was state-owned [during the Cold War].”

Gründ also began co-editions with Paul Hamlyn with art and children’s books. Éditions Gründ’s sales became exponential, and after a while the co-editions represented 80 percent of the company’s sales.

Enter the editor Monique Souchon in 1981, who became Monique Gründ. “Monique made me realize that depending on these two suppliers was dangerous, and she encouraged widening our partnerships,” said Gründ. This was a wise move, because eventually “in 1989 the Czechs had their revolution and disappeared and then Hamlyn sold his business. But we had done many fun things together.”

“Little by little, with great courage, each year Frankfurt built itself up and changed, and each time I would get lost.”Alain Gründ

Monique was responsible for bringing in Where’s Wally? (Où est Charlie?), which became immensely successful, as well as other titles that Éditions Gründ licensed, such as the Smurfs.

Looking back, Gründ remembers his first Frankfurt Book Fair in 1958, when the city “was not a pretty sight. The train station was full of American soldiers. Little by little, with great courage, each year Frankfurt built itself up and changed, and each time I would get lost.”

But what has remained a constant at Frankfurt, said Gründ, is the friendship between exhibitors. In the early days “we would build the stands ourselves and pass the hammer and nails back and forth. Women would walk down the halls shouting ‘Zigaretten!’ selling cigarettes. It was also a formidable place to bring an employee to train them—when they saw what Frankfurt was and how you developed a co-edition. At the end of the day, the majority of the big deals I made all happened in Frankfurt.”

But Gründ also emphasized the need to remain humble. “Each year, everyone would talk about a new star, whether an author or a publisher, and the next year they could fall on their faces.”

Gründ’s wife Monique fondly remembered an incident involving the toilets at Frankfurt. “We would begin at 9 a.m. and finish at 7 p.m. and never have time to go to the toilet,” she said. “One day we finally went to the toilet and I was waiting for Alain but he wasn’t coming out. When he finally emerged, he was wearing a special pin that [former Frankfurt Book Fair director] Peter Weidhaas had just given him to celebrate his 40 years at Frankfurt.”

With his newfound free time, he says he hopes to take up playing the piano again and indulging in his passion for history, reading books specifically about Europe during the years 1933-1947 and the Algerian War.

This story was originally published in our Frankfurt Book Fair Show Daily Magazine of Friday, October 12, 2018.