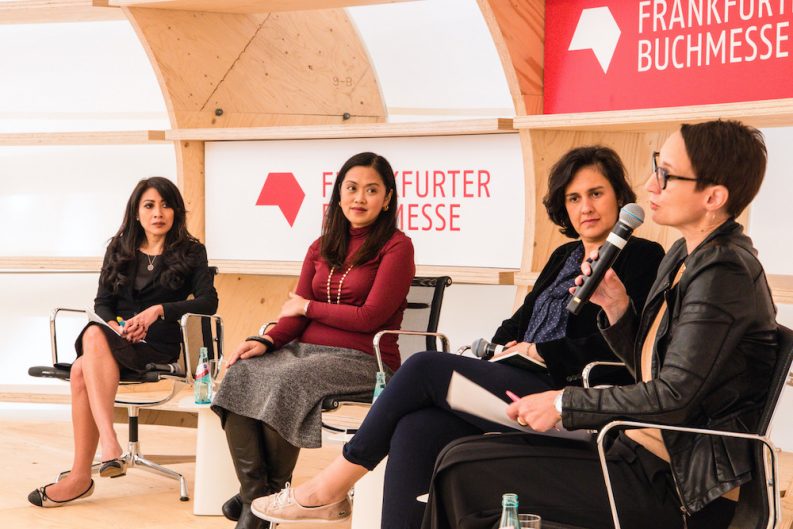 In the discussions of female writers in Frankfurt, a standout panel of women from the Asia Pacific region discussed gender and social perceptions of women. 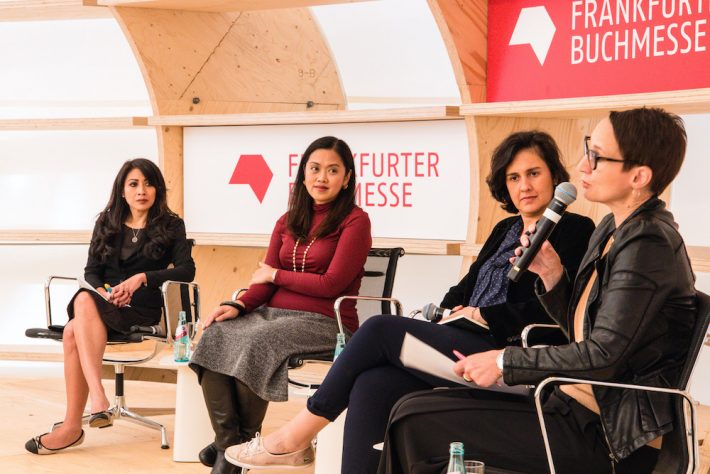 ‘How We Pay Attention to Women’

In a talk with women writers from the Asia Pacific region, three authors discussed the value of women’s prizes, stories by women, how women authors are read, and how social and political tensions in their countries affect their writing.

One of the speakers, Pakistani-British author Kamila Shamsie, won the 2018 Women’s Prize for Fiction for her novel Home Fire. She said that she felt the prize—set up in 1996 to counter the lack of women on literary prize lists—has shown how “action can transform literary culture.

“Some people think progress and action come with the passage of time,” she said, “but I believe you have to take action. In Britain, the creation of Virago [a publisher of books by women] and this prize were part of this action. The number of women shortlisted for the [Man] Booker Prize rose exponentially since the original Orange [Women’s] Prize. We’re giving women a platform. It’s meant a lot to me as a woman, as a writer and as a feminist.”

Indonesian poet and author Laksmi Pamuntjak, who won the 2016 LiBeraturpreis for authors from Africa, Asia and Latin America for her novel Amba, said that she was very happy to have won the prize because “the greatest challenge for a writer in Indonesia is to be heard. Not much of our literature has traveled.” However, she said, “I don’t think any women would like to be undervalued or overlooked for [simply] being a woman but at the same time they don’t like to be encumbered by just that, being a woman. That is the paradox.”

It’s important for there to be women’s prizes, said short-story writer Andrea Pasion-Flores, a former literary agent, and currently general manager of Anvil Publishing in the Philippines.

Pasion-Flores said she has also noticed that the portrayal of women in novels often “feels like they’re accessories or not as well-developed as characters.” A prize that recognizes how women write about women would fill a much-needed space, she said.

“In the Philippines most writers are expected to write about the nation,” she said. “It has to be political or historical. If you’re writing about family, relationships, or your body, this is seen as less important than a big political story.”

The issue isn’t just about women writing certain kind of books and men others, said Shamsie, “It’s the way the books are being read.”

She said she has noticed that writers from Pakistan, such as Mohsin Hamid or Nadeem Aslam often have a strong romantic line in their novels. But it has been pointed out to her that as a female author, even if she writes about politics, the romantic side is talked up and the political side downplayed, contrary to male authors.

Nevertheless, said Pamuntjak, “the world is experiencing a seismic shift on how we pay attention to women. Even I have been affected by heightened feminist awareness.”

And what about gender imbalance in publishing? In 2015 Shamsie had published a provocative article in the Guardian calling for 2018 to be a year in which only women writers should be published, to redress the balance. Although she said that only the publisher And Other Stories stepped up to the challenge, it made other publishers stop and look at their figures and realize that in fact they had been publishing more men.

In the UK, said Shamsie, “Sometimes imperative thinking just requires one to say stop, look at the books you publish.”

Pasion-Flores said that as a publisher, she’s always on the lookout for women’s writing and when she’s in the process of editing a book she looks closely “at the treatment of women’s characters. If I find something offensive, we’ll discuss this with the writer. It’s to help bring out a great story all the while with careful reading.”

Even in her own work, a collection of short stories called For Love and Kisses, she found she had been affected by the social culture in the Philippines where “there is a deeply ingrained sense of shame among women and women should be seen and not heard.”

There have been recent events in the Philippines in which women politicians have been publicly shamed, said Pasion-Flores and there is an atmosphere of “toxic masculinity…It has been accepted that the macho attitude seems to have paved the way for the type of government we have right now.” She is not sure, however that writers have sufficient distance from what is happening currently and doesn’t yet know if “the writing is ripe yet.”