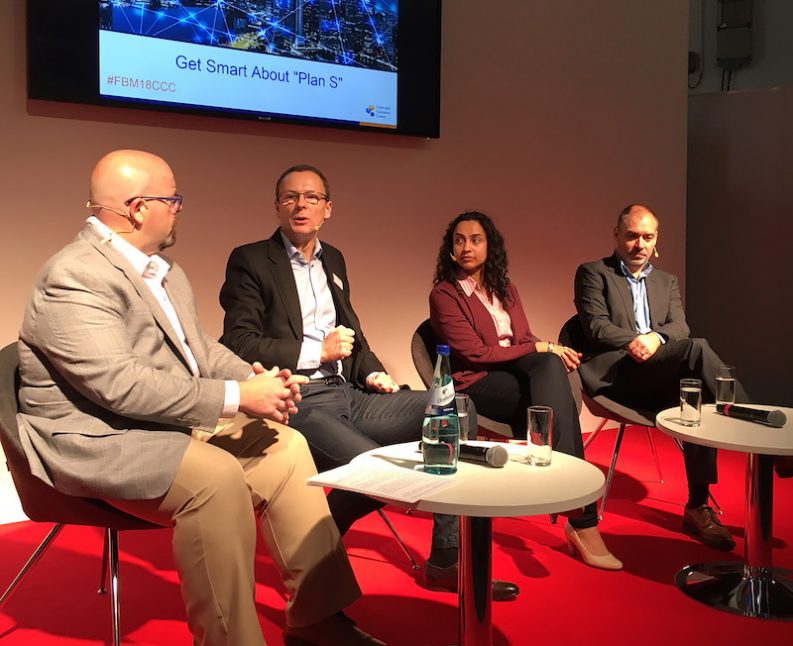 In Frankfurt, academic publishing experts expressed their many concerns about ‘Plan S,’ an new open access strategy announced by research funders in Europe. 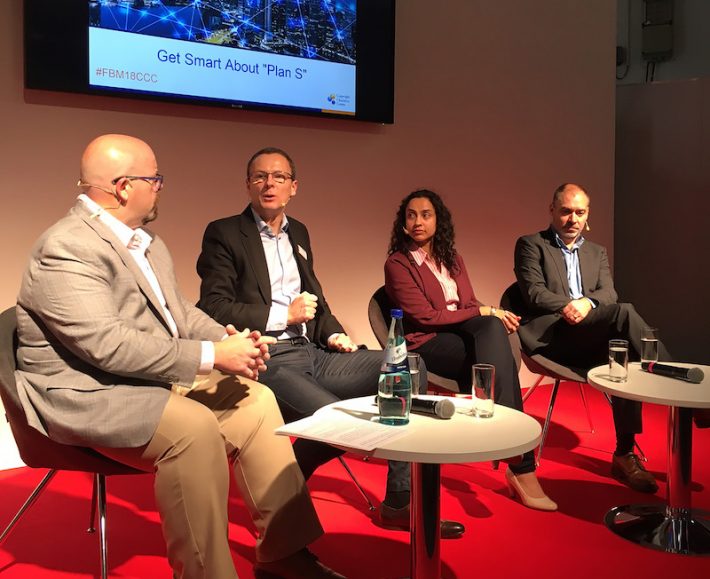 ‘The Value of What We Do’

At a Frankfurter Buchmesse event on Thursday called “Get Smart About Plan S,” Malavika Legge, acting director of publishing for Portland Press and the Biochemical Society, said, “With Plan S, there has been a lack of consultation, a lack of consideration, a lack of detail, and a lack of time.”

Plan S is said to stand for science, speed, solution, and shock. Moreover, it is clear from the reactions on the stage that “shock” sums up what the publishers on stage feel about the radical open access plan announced only on September 4 by the European Research Council. The plan is supposed to be implemented by 2020, which in the timescale of publishing is—as Legge says—“already here.”

Bewilderment may be a better word for the mood of the session whose participants all claimed to be committed to open access publishing. The plan by about a dozen of the leading funders of research in Europe responsible for €7.6 billion (US$8.8 billion) is to mandate that all papers that are the product of research funded by them be free to read as soon as possible. “No science should be locked behind paywalls!” was the declaration in the preamble to the plan.

The initiative still lacks detail, but it is clear that it’s meant to stamp out hybrid open access business models which will now be declared as “non-compliant.” Hybrid models of publishing typically make papers immediately free to read if a scientist wishes, but keep most studies behind paywalls.

In 2017, only about 15 percent of papers were published immediately as open access. More than one-third of journals still publish papers behind a paywall, and typically permit online release of free-to-read versions only after a delay of at least six months. Just less than half use a hybrid model, in which the author pays the publisher for certain services.

More than one-third of journals still publish papers behind a paywall, and typically permit online release of free-to-read versions only after a delay of at least six months.

“We fully support open access,” said Tim Britton, managing director of the Open Research Group at Springer Nature, “but there are lots of ways of making info freely available, open access is just one.”

Britton points out that in the UK, the Netherlands, and Sweden, there are already agreements to allow access to materials.

“Then there is the mantra that hybrid business models are bad, but it doesn’t make sense to create a new offer for open access when we have journals that have been around for hundreds of years.”

There was also an evident worry shared by all three speakers that the impact of Plan S would be felt disproportionately by the funding-starved humanities and social sciences.

“I don’t understand how a model that has been developed out of medicine can be transferred across to the humanities and social sciences,” said David Ross, executive director of open access at SAGE Publications, which represents around 200 social science societies.

“Thousands of small social science publishers will be endangered by this. We are trying to get in front of the implementation task force to talk about how Plan S will work in different disciplines and the implications for all the societies that we represent.

“We have heard that they thought about treating humanities and social sciences differently, but then decided not to,” he added. “At least that is a start.”

Legge said she felt that being the independent publishing arm of a learned society gives her an advantage in the Plan S world of being focused on a global discipline. However, she believes that their size could be a disadvantage.

“What is worrying for us is that Plan S says that hybrid models will be only tolerated as a transformational arrangement,” she said. “We are just too small to negotiate deals with individual libraries.”

American publishers may solve the problem by deciding not to publish European research that only accounts for 2 to 3 percent of their content.

For the authors, she is worried that Plan S may impose burdensome paperwork because the problem for the architects of the plan is that science crosses borders.

“The problem is what happens when an author based in China is collaborating with an author in Europe?” she asked. “Whose rules dominate? If there is a bill, who should pay it and where should it be paid?”

It was clear by then that Plan S may have consequences unintended by its designers. The end of the hybrid model may drive further consolidation in the market despite the protestations of publishers like Legge that they are committed to remaining independent.

In an age of walls being built to divide people, Plan S may create another. When faced by the demands of Plan S, American publishers may solve the problem by deciding not to publish European research that only accounts for 2 to 3 percent of their content.

The panelists felt that even if Plan S accelerates the transition to open access publishing, it still represents an existential attack on the academic publishing industry. While some publishers say they are staring into the headlights of Plan S like a deer, others say it should be a call-to-arms by the industry to challenge the stereotype that all they care about is profit.

“The starting point is too often that publishers are bad,” Britton argued. “Actually, we do a good job, and we need to reassert the value of what we do, and that we do it for the good of the world.”

More from Publishing Perspectives on open access is here, and more on Frankfurt Book Fair is here.