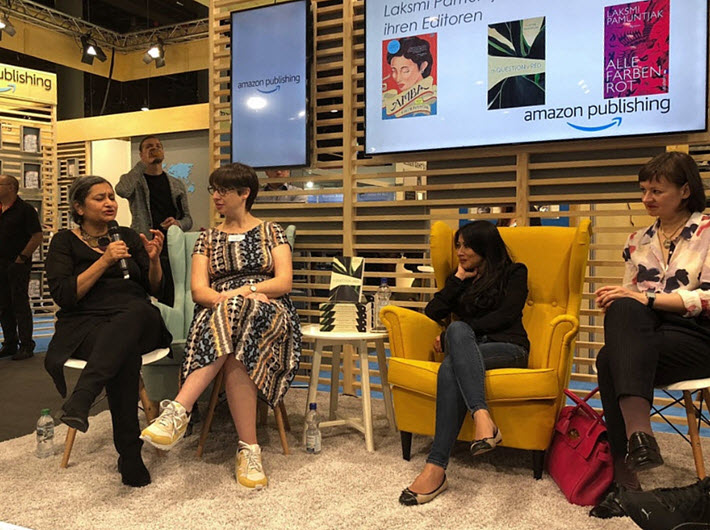 In Frankfurt, Indonesian author Laksmi Pamuntjak and her editors discussed what makes a book work in translation despite leaps of language, culture, history, musicality, and even foods.

The bilingual author and translator Laksmi Pamuntjak easily drew a crowd to the Amazon Publishing stand in Hall 3.0 at the Frankfurter Buchmesse earlier this month, not least because her first novel, The Question of Red, won the 2016 LiBeraturpreis, a 30-year-old award in Germany for women writers of Asia, Africa, Latin America, and the Arab world in Germany. 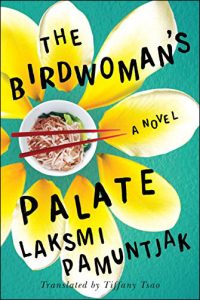 The surprise for the audience about that title, published in its English translation by AmazonCrossing (2016), was that Pamuntjak translated it, herself.

“And for the most part, it was an excruciating process,” she said, eliciting immediate laughter from the audience. “The most difficult thing is that there’s always something lost in the act of rewriting, of translating something into another language. There’s a reduction of things not transferable, such as cultural collective memories. Contextualization is very difficult.

“And when you talk about self-translation, it can enrich the process but can make it more difficult because you must negotiate all the time. You’re probably not the best person to do it because while you know the work well,” that requirement of compromise makes it “something I don’t want to do again.”

Pamuntjak actually had tried writing The Question of Red in English, abandoned the effort, wrote it in Indonesian, then translated it, herself, to English.

“I recommend you not do this,” she said. “I think I’ve learned my lesson.”

More recently released by AmazonCrossing, her novel, The Birdwoman’s Palate (February 2018), is translated into English by Tiffany Tsao, and its grounding in the vast culinary life of her native Indonesia is based in this author’s work as a journalist and food writer. 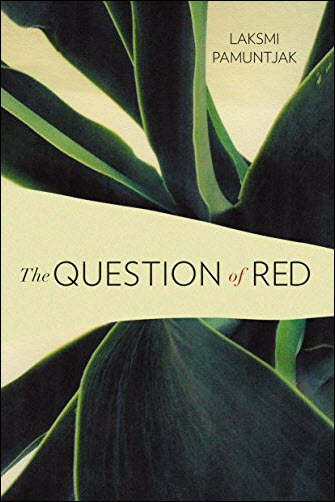 “None of that was planned,” Pamuntjak said, to more laughter from the audience for this panel moderated by Publishing Perspectives.

Pamuntjak grew up reading in both Indonesian and English, and she entered her publishing career as a journalist.

“There was so much potential in food writing,” she said, “because of the vocabulary, the range of expression, and even the possibility of introducing new concepts to food writing that goes beyond, ‘This is very nice,’ and ‘This tastes very good.'”

The Jakarta Good Food Guide, she explained, was the result of this inspiration, “and it was a crazy project, really,” now in its fifth revision.

“I compiled some 600 eateries, from fine dining to street food, in one book. And this was the pre-digital era, mind you, so I went and sweated and did all the necessary work, morning, noon, and night, going to all these places and trying them,” she said. “And cultivating a certain kind of discipline with which to do it, which was useful, because it gives you a purpose and it gives you time to think about the things surrounding a certain restaurant.”

Despite that meeting of journalistic discipline and food, “I dabbled in poetry, as well, because I do have a musical background, playing the piano since I was 4 years old. And this gave me ways of seeing that I think affect my writing about other things.

“If you think in terms of rhythm, if you think of musicality, in terms of texture, of senses, colors, aroma, it helps, it enriches your writing.” And what Pamuntjak found was that all these elements had become the recipe of her writerly voice. “I’ve realized that learning Italian for me, for instance, or learning German, came from playing the piano at such a serious level—as well as eating. So many Italian terms out there, you become familiar with them from early on.”

Kress: ‘The Most Complicated Things’

The vocabulary of food writing that Pamuntjak was describing would become, ironically, one of the most daunting parts of her career for the publishing houses that would translate her work. There’s an inherent challenge in translating food writing because terms don’t always cross easily from one language to another. 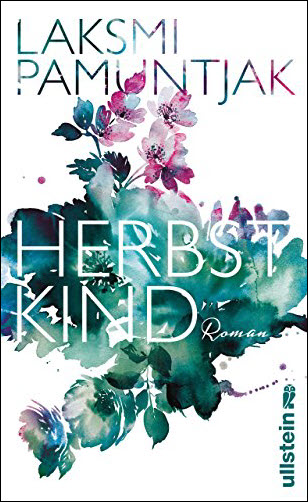 One of the first to encounter this was senior editor in fiction Kristine Kress of Ullstein, Pamuntjak’s German publisher. The Berlin-based house in August released Pamuntjak’s novel Herbstkind (Autumn Child) in Corinna Rodewald’s translation, and in 2015 published Alle Farben Rot (The Question of Red) in Martina Heinschke’s translation, a book patterned on the Mahabharata and dealing with Indonesian political culture in the 20th century, in terms of dictatorship and democracy, colonialism and independence.

Kress and her team are now working on The Birdwoman’s Palate for its German publication in 2019, and she described how she discovered while working on Alle Farben Rot (The Question of Red) that “Laksmi is a very poetic author, which helps a lot. Her work is a lot about translating.

“Often when you have a novel from a totally different background or culture, the most complicated things are the references, of course. Something may be what the German readership won’t get. But Laksmi is so able, in terms of finding words for colors, taste, it turns out that she has done a lot of the work for us, herself.”

When something simply “doesn’t translate,” as we say, because there actually is no equivalent term in another language, “That’s when it’s so important for us to be in constant communication with the author and the translator,” Kress said. “It really is teamwork.

“And Laksmi’s work has such rhythm, which really is very different from German. In a way it helps you because you need to keep that beat. But, of course, you need a very capable translator. You get to learn a lot, both about language and cultures.” 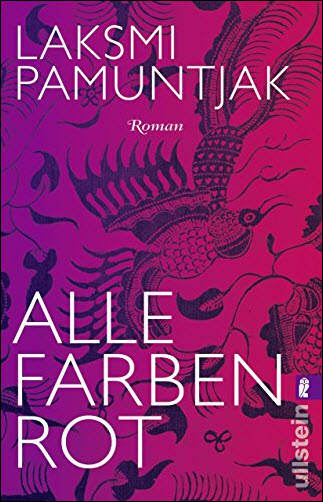 Speaking of learning a lot about both language and cultures, the editorial director with AmazonCrossing, Gabriella Page-Fort, joined the panel in Frankfurt to talk about her own rarefied role at the intersection of so many literary pathways and potentials.

Something like the Frankfurt Book Fair, she said, “really is a gift. You leave Frankfurt Book Fair with 200 books that you’re really curious about, some will fall out because your curiosity gets stale or something else comes up that’s similar but better. And that luxury” of so much choice, such latitude of selection, “just doesn’t exist if you’re sitting at a desk wondering if someone has done something like this similarly or whether someone has done it better.

“In the food novel department, there are a million food novels, but in The Birdwoman’s Palate, what made it exceptional for me is that I’ve never tasted the food in the book. And yet I feel like I have that experience on my palate. If I were to travel to Indonesia, I now feel I’d understand what the types of food I’d encounter might be and how I could experience them because Laksmi has shown me, through a character.

“I’m good at suspension of disbelief,” Page-Fort said with a smile, “one of the most gullible people on the planet. You can easily lead me down different paths. But I do think there are many books capable of giving you the experience of something. It’s not easy, either. What really travels about Laksmi’s work is that she embodies the music of the experience, and the next thing you know, you’re extremely, specifically curious about the exotic ingredients you’ve never tried in a dish, but you’re also right there on the page, glad to be in a little soup shop together with friends.”

Page-Fort: ‘Whether the Book Itself Is Enough’

In essence, Page-Fort said, when it comes to the decision-making process in terms of which writings to publish, “A lot of it is trying to figure out whether the book itself is enough. There are a lot of books I get pitched and a lot of books I like that don’t have everything a reader needs within the book itself. Readers don’t like footnotes and forewords and ‘Once you’ve been educated you can enjoy this wonderful work of art'” as an approach.

“I don’t like to read the statement next to a painting at a museum, I like to look at the art. And in a book, although we often have to make a decision on [the basis of] a few pages, you can feel what the writer is feeling. And if you get the sense that a writer is going to give you what you need, it doesn’t matter that these things are new to you.”

It’s that peculiar element of literary selfhood, of a work’s ability to, as Page-Fort said, hold its own in the reader’s imagination across what might be time, space, language, and cultural references, that can make a work in translation succeed.

And it turned out that this is something Pamuntjak’s literary agent knows well.

Jayapriya Vasudevan of Jacaranda was on hand for the discussion in Frankfurt, too, and put a kind of button on the exchange when she described what an experience it was for her to watch Pamuntjak work with translators. “Almost like a new chapter opening, a new dimension, something not seen before.”

Colors, tones, concepts appear in the work in translation, she said, that may not have seemed apparent in the original–new facets of that work’s ability to stand on its own that Page-Fort was talking about.

“It’s been a journey, even for me, as literary agent.”

More from Publishing Perspectives on Frankfurter Buchmesse is here; on translation is here; on Ullstein is here; and on AmazonCrossing is here.