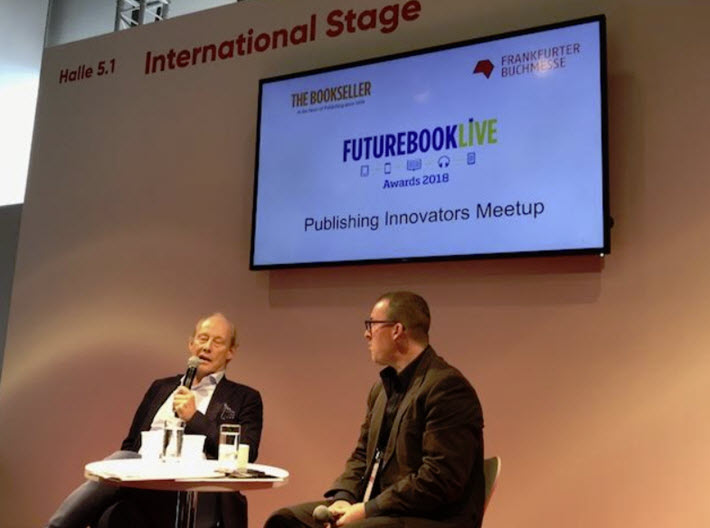 With nominees in five categories, the Futurebook Awards highlight people, projects, and companies focused on digital publishing and formats. 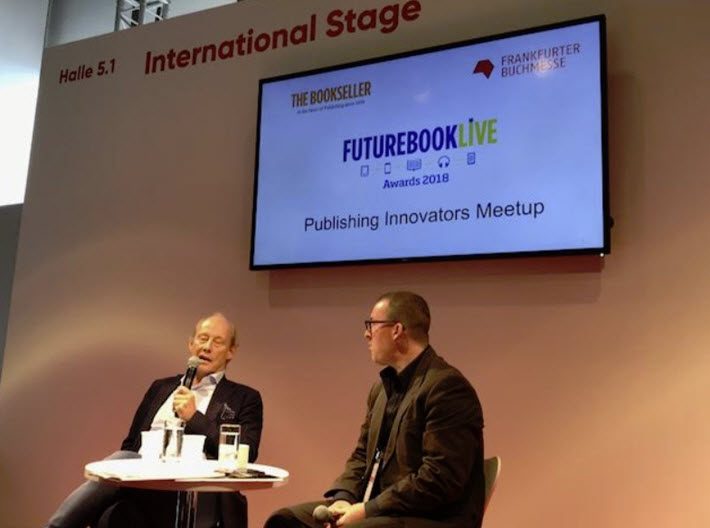 Audiobooks and Edtech Again Have Strands

At the Frankfurter Buchmesse last week, London’s The Bookseller made its customary announcement of its FutureBook Awards, which are to be presented at this year’s FutureBook Live conference on November 30 in London. The conference is sponsored this year by the Frankfurt Book Fair and Mosaic, the executive search company.

Once more, the programming is being built in three tracks, with audiobooks and edtech getting their own parallel sequences, along with a central, more eclectic program. A four-way split of topical streams appears after the opening plenary (which has four keynotes), with channels of programming themed as “provoke,” “propose,” “predict,” and “play.”

The awards this year have added the category Podcast of the Year, which is described by organizers as seeking “both solid successes and bright new entrants in a medium exploding with good ideas.”

In terms of potential wins for publishers, there were concentrations of nominations announced for three houses:

Parsed by categories, the shortlisted nominees are as follows.

The six projects in the running for FutureBook of the Year include two audiobooks, as well as one print book with integrated audio, and a medley of audio, art, and animation as featured in The Real Thing, a bundle of short love stories from Amazon Publishing.

Augmented reality pops up in something being dubbed “the first ever AR-powered novel,” The Ghostkeeper’s Journal and Field Guide from Carlton Books, while WatAdventure in Australia, from the new kids’ publisher WatAdventure, focuses on crowdsourcing parts of the book from its young readers through PopJam.

2018 FutureBook Shortlist: Campaign of the Year

The FutureBook Campaign of the Year award honors big-name authors given “a fresh spin” with clever use of digital, with Lily Allen’s My Thoughts Exactly from Bonnier Books, and The Retreat by Mark Edwards from Amazon Publishing in the running as well as the voice-activated StoryCastle Google Assistant app from HarperCollins Children’s Books. “Smart and emotive campaigns” include Gaspard the Fox from Graffeg.

2018 FutureBook Shortlist: Podcast of the Year

The Podcast of the Year category has only one nomination for a Big Five company, the “all-bells-and-whistles (complete with Alexa skill) Penguin Podcast.  The book-condensing app Blinkist is tapped for its Simplify series. Two children’s podcasts make the list–the four-year-strong pioneer Down the Rabbit Hole and Story Shed.

Both Mostly Lit, members of which appeared at last year’s FutureBook conference, and Not Another Book Podcast are nominated “for their skill in positioning books as part of wider pop culture for a more diverse audience.”

Among the five nominees shortlisted for BookTech Startup of the Year, Publica–not to be confused with Publica.la of Argentina–looks to get self-publishing authors engaged in blockchain usage and two “-ful” companies: Bookful is an AR outfit, and Commaful “hosts short, visually led clickable stories for the Instagram generation.

The jury set to hear the day-of-conference pitches from the BookTech Startup contenders on November 30 are Alex Wood, Europe editor of Forbes; Bec Evans, founder of Prolifiko; and Marine Debray, head of group strategy and business development at HarperCollins UK.

2018 FutureBook Person of the Year

The Person of the Year award is announced ahead of the FutureBook Live event.

The conference, which is sponsor will be held for a third year at the very comfortable 155 Bishopgate venue in Liverpool Street, and runs from 9:30 a.m. to 5:30 p.m. on the 30th of November. Early bird pricing is available now at £399 for Bookseller subscribers and £429 for non-subscribers, with more information here.

More from Publishing Perspectives on Frankfurter Buchmesse is here; on London’s FutureBook conference is here; and on awards in publishing, we have more here.