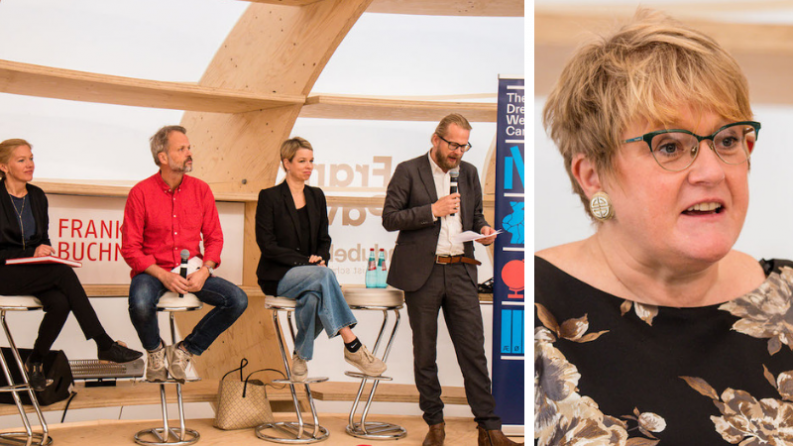 Norway’s minister of culture, along with several Norwegian authors, offered a preview of what the country will bring to its 2019 Guest of Honor program. 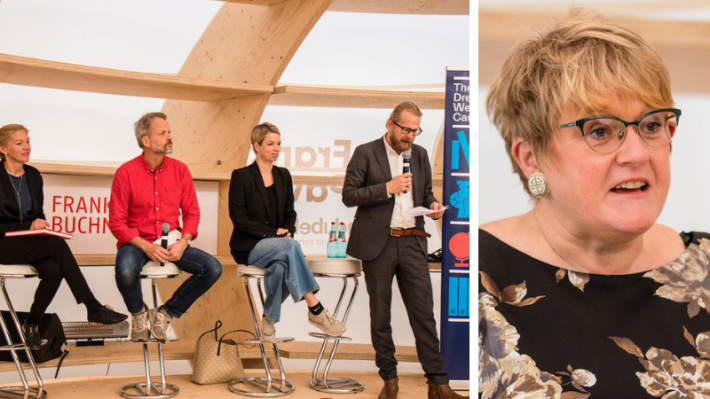 Norway’s slogan for its program as 2019 Guest of Honor at the Frankfurt Book Fair is “The Dream We Carry,” a line from a poem by Olav H. Hauge, who was also a horticulturist and translator.

It’s indicative of an openness that Norway hopes to bring to Frankfurt, a curiosity to read stories from different places, said Norway’s minister of culture, Trine Skei Grande, at the press conference held yesterday in the Frankfurt Pavilion.

“We are fighting for democracy to stay relevant all over the world,” said Grande. “People need bridges … In times like these, Frankfurt can be our rostrum where we can show the importance of cultural cooperation and joining forces with the right people … How can we understand each other if we are not curious about each other and don’t read other people’s stories?”

Norway was a perfect choice for Frankfurt, said Juergen Boos, noting Norway’s freedom of press, its record of fairness on gender equality, and the fact that ICORN, the International Cities of Refuge Network is based in Norway.

Margit Walsø, director of NORLA − Norwegian Literature Abroad, and Halldór Guðmundsson, project manager for the Guest of Honor program, said that it was at Frankfurt that the international book market began to show a renewed interest in Nordic literature following the success of Jostein Gaarder’s Sophie’s World in the mid-1990s.

Since then, Nordic noir and other literature has flourished, and in 2017 the number of titles that received translation support from NORLA was five times higher than ten years ago.

“We want to show strengths and weaknesses, [in literature]” said Myhre, “We are not here just to boast.”

Erling Kagge, an explorer, publisher and author whose Silence: In the Age of Noise was published in 36 markets said that today, “there is so much noise in society that you need to create your own silence,” and these silences are all different.

Maja Lunde spoke of her love of writing for adults but particularly children: “Making children read is one of the most important things you can do. It feels meaningful to write for children.”

Her 2015 The History of Bees was Germany’s bestselling book in 2017. The story is written against a backdrop of environmental concern, but Lunde said, “I don’t think of my books as political, they are novels but can be read in many different ways. The magic of novels is that there are as many versions of a book as there are readers. The readers can decide for themselves. I am more into asking questions than giving answers.”

Linn Ullmann, whose novels have been translated into 30 languages said she wrote because she started out as a reader. She writes in order “to manage and understand fear, anxiety, life, death, these things that I don’t understand but at least I can be in the company of the questions and be present … Truth is often found in fiction.”