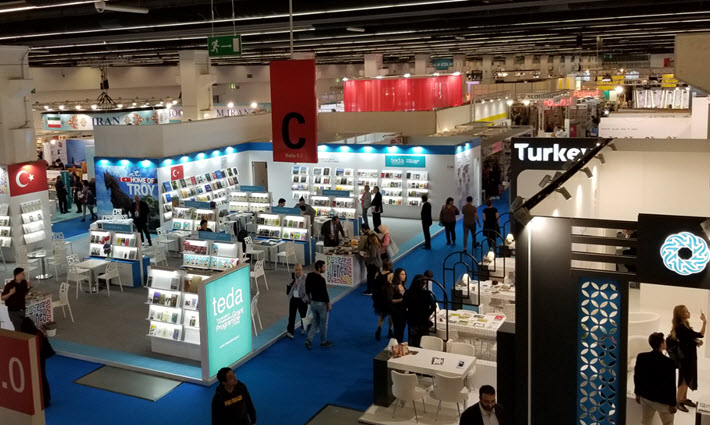 Intended to produce multifaceted programs on books, films, television, and game, with special focus on the licensing opportunities they offer, the LIMA-Frankfurt agreement is underway.

In the international hall at the 2015 Frankfurter Buchmesse. Image: Porter Anderson

‘Closer to the Wider Entertainment Industries’

The partnership between Frankfurt and LIMA began Friday (October 12) when Maura Regan, president of LIMA,  gave a presentation on licensing opportunities for book publishers on the new Frankfurt Kids Stage, a 500-square-meter area for children’s and young adult media.

In the coming year, the two organizations are expected to work together to co-host high-profile events in Southeast Asia and the Middle East, including participation in Frankfurt’s existing StoryDrive Asia conference in Singapore in November and in a new event in the Middle East in the spring.

These events are intended to combine the expertise of both the book fair and of LIMA to put forward multifaceted programs on books, films, television, and game, with special focus on the licensing opportunities they offer.

Juergen Boos, Frankfurter Buchmesse’s director, is quoted in a prepared statement, saying, “Rights and licenses have always been at the heart of the book fair and, with the worldwide licensing business worth around US$272 billion per year, we’re obviously keen to explore any opportunity that brings us closer to the wider entertainment industries.

“LIMA knows this area well, so it seems like a natural fit for us to be working with them now in a co-operation that will benefit both sides.”

LIMA’s presentation at the 2018 Frankfurt Book Fair is the first step of this collaboration between the two organizations, which both have global experience organizing professional conferences and events.

Regan, in her statement, is quoted saying that the Frankfurt-LIMA partnership will “foster the expansion and growth of licensing around the world.

“Content and storytelling are at the core of successful licensing programs, which engage consumers and drive revenue.”

More coverage from Publishing Perspectives on LIMA is here, and more on Frankfurter Buchmesse is here.