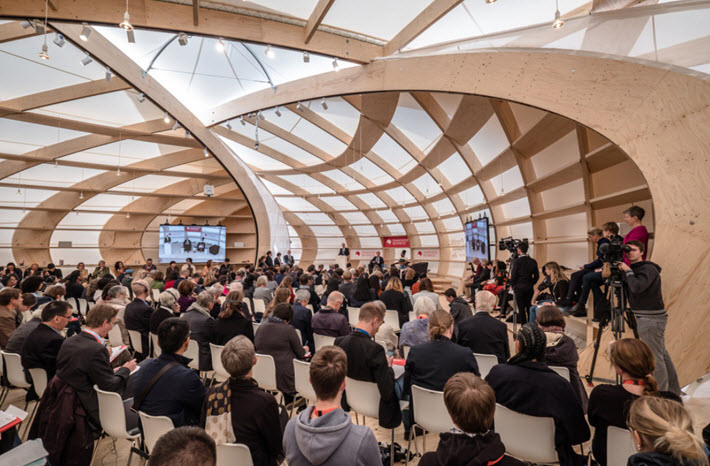 As Georgian authors and Bavarian voters reinforce the political volatility of the context this year, Frankfurter Buchmesse records a slight increase in overall attendance. 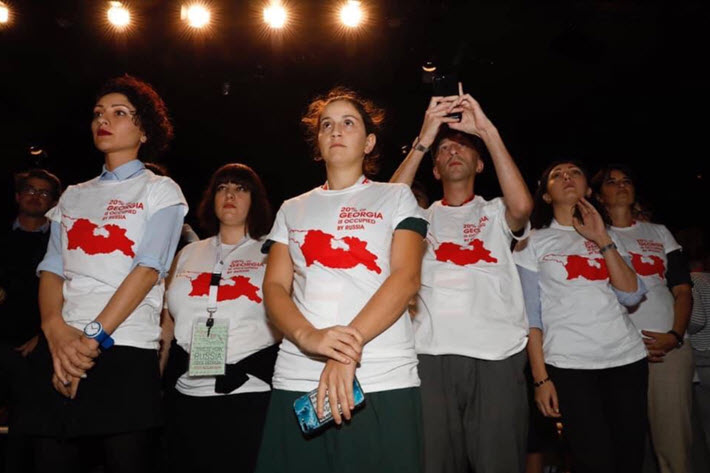 Late Friday (October 12), Georgian authors and publishers staged a protest of Moscow’s occupation of 20 percent of their country’s territory on the performance stage of the Georgia Guest of Honor Pavilion at Frankfurter Buchmesse. Image: Intelekti

As the Frankfurter Buchmesse comes to a close today (October 14), organizers are reporting that the 70th iteration of the book fair, ranked as the world’s largest trade show for the books industry, “ended with an increase of 0.8 percent in visitors at the weekend”—the public-facing part of the week—”and a slight decrease of 1.8 percent during the trade visitor days,” which are Wednesday, Thursday, and Friday.

A total 285,024 visitors are reported being counted at the 2018 fair, as compared with 286,425 in 2017, representing a relatively flat level of participation year-over-year, a 0.5-percent decline from last year.

Busy with programming on the book business as well as political and social issues, the book fair was at many points energized by topics touching on current affairs.

Indeed, as the fair closed, voters in Bavaria had gone to the polls on Sunday, and Justin Huggler was reporting from Berlin for The Telegraph that the German chancellor Angela Merkel’s Bavarian allies, members of the Christian Social Union, had suffered their worst election results since 1950, with a robust showing—not from the Right but from the the center-Left turnout for the Green Party, which more than doubled its vote.

As expected, programing also included many references to the upcoming midterm elections in the United States (November 6) and the ongoing confusions around the UK’s Brexit situation. 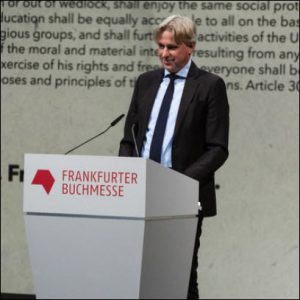 In a prepared statement, Juergen Boos, director of the fair, is quoted, saying, “As the most international event of its kind, Frankfurter Buchmesse is the ideal place to discuss topics affecting the global community.

“We saw a noticeable increase in the need for political participation; the desire is increasing to represent one’s own position and participate in the public discourse. A number of topics predominated during this year’s activities, including the importance of human rights, along with displacement and migration, populism and civic engagement.

“During the trade visitor days, the focus was on international book markets and industry trends.”

Boos is paying special tribute to the hardworking team that brought Georgia’s Guest of Honor program to the fair this year.

The installation, he said in media messaging on Sunday, “touched the hearts of the fair’s visitors–a presentation that expansively showcased the Georgian alphabet with elegance and ease, one that included performances, music, culinary discoveries, readings and, above all, an impressive range of literary voices.

“The team led by Medea Metreveli put together a brilliant program and introduced us in just a few days to Georgia’s ‘characters’ and its age-old culture. Georgia invited us to take a journey of discovery–an invitation we gladly accepted.”

Following a literary talk with the Georgian author Zurab Karumidze and the Norwegian author Åsne Seierstad, the role of Guest of Honor was handed over to Norway for 2019. Musicians Mathias Eick, Kjetil Bjerkestrand and Herborg Kråkevik from Norway enriched the handover ceremony with sounds from the far north.

Another big hit with many at the fair was the new Frankfurt Pavilion, which was opened by Germany’s federal president, Frank-Walter Steinmeier.

It’s in the natural-wood setting of that light-filled pavilion that world-class authors turned Frankfurter Buchmesse into a literary festival: Chimamanda Ngozi Adichie, for example, set the tone with her impressive speech on charged topics including migration, racism, and women’s rights.

During the five days of the fair, authors including Paul Beatty, Dmitry Glukhovsky, Maja Lunde, Laksmi Pamuntiak, David Sedaris, Nguyen Ngoc Tu, Meg Wolitzer and others were seen on various presentation stages of the Messe buildings. 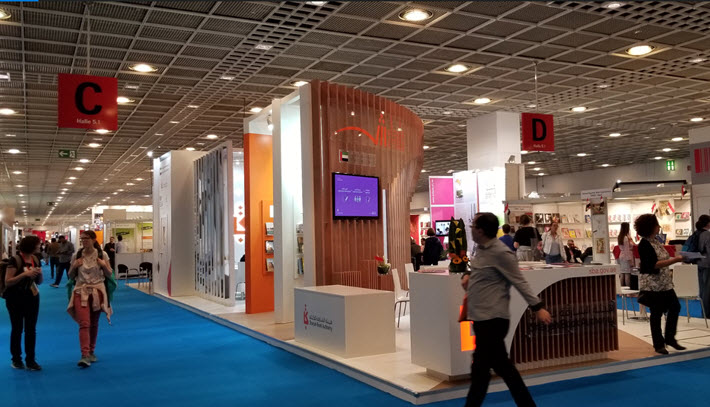 In the international Hall, 5.1 at the 2010 Frankfurter Buchmesse. Image: Porter Anderson

Overall, international attendance is reported to have increased at the fair this year, both in exhibitors and trade visitors. With 7,503 exhibitors from 109 countries, the fair experienced a slight increase.

The Literary Agents & Scouts Center also grew once again, with 528 booked tables, as compared to 500 in 2017. This year’s tallies for the “LitAg” include:

Some of the figures being offered in media messaging are quite round, making it seem that they may be ballpark numbers.

At THE ARTS+ area in Hall 4.1 this year, for example, a total 3,000 people are reported to have taken part in programming, and attendance at that part of the fair, bathed in pink lighting, is said to have reached 125,000 visitors.

As reported by Publishing Perspectives, the BookFest program was expanded this year, staging events, mostly in the evenings, in various parts of the city and at the new Frankfurt Pavilion in the Agora. Officials say that BookFest programming drew 25,000 visitors.

Riethmüller: ‘The Pulse of the Times’s 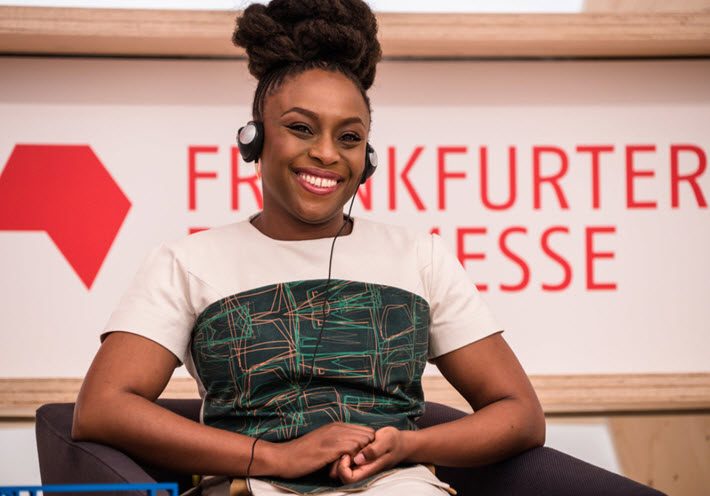 As mentioned by Boos, topics in the human rights arena were central in many instances of trade show programming, as well as in conversations throughout the campus about the charged political era in which this year’s fair has taken place.

As Publishing Perspectives is reporting this weekend, the campaign “I’m On the Same Page“—a recognition of the 70th anniversary of the United Nations’ Universal Declaration of Rights, drew international attention. Initiated by Frankfurter Buchmesse and the German Publishers and Booksellers Association—and carried out in cooperation with the European culture channel ARTE, the television broadcaster ZDF and the weekly news magazine Der Spiegel, and with support from the United Nations and Amnesty International—the campaign will be further developed in coming months, and Publishing Perspectives has additional coverage planned.

Heinrich Riethmüller, chairman of the German Publishers and Booksellers Association, the Börsenverein des Deutschen Buchhandels, is quoted by organizers, saying, “The 70th Frankfurter Buchmesse had its finger on the pulse of the times. The book industry took a clear stance in favor of human rights, freedom, diversity and respect.

“For five days, Frankfurt was the world’s largest trading center for content and stories. The book fair demonstrated that it is a place of ideas and debates—and a huge reading festival, as well.

“It was possible to clearly experience the enthusiasm people have for books and the meaning literature has for them. Publishers and booksellers are working intensively to develop new connections to today’s customers, something that was also palpable at the fair.”

Some fairgoers mentioned during the week that they felt the attendance was lighter, the hallways less crowded in some buildings of Frankfurt’s sprawling Messe complex. Certainly, the S and U trains feeding into and out of the site seemed as crowded as ever at peak hours.

Unusually pleasant, sunny weather—reaching nearly 75 degrees Fahrenheit daily—may have kept more visitors outside in the Agora than usual, according to some attendees’ speculation.