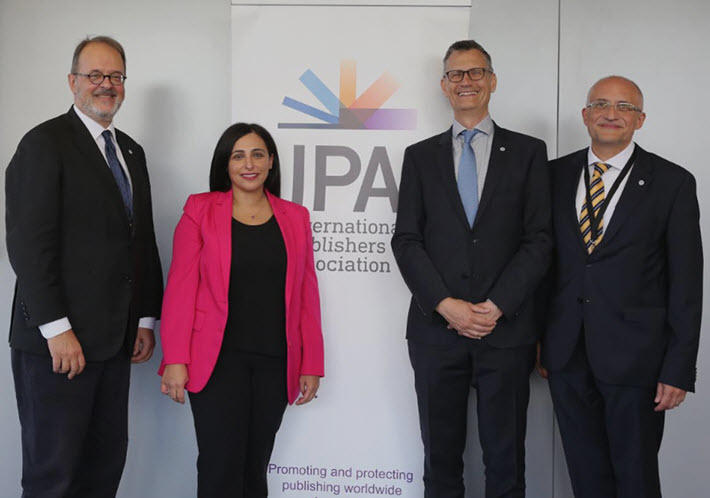 ‘The Diversity of Our Organization’

Chief among them were the confirmations of two well-known figures in the association, who had been nominated to become the organization’s new president and vice president.

And the UAE’s Sheikha Bodour Al Qasimi of Sharjah—the publisher of children’s and young people’s literature who is CEO of the Kalimat Group and founder of the Emirates Publishers Association—was confirmed as the organization’s vice president.

In a prepared statement, Kolman was quoted, saying, “The election of Hugo Setzer and Bodour Al Qasimi as president and vice president of the IPA is great news for the future of IPA.

“These are two people from different regions with great experience of the industry as publishers and within national, regional, and international associations. Their commitment to IPA’s pillar, the freedom to publish and copyright, have been proven again and again. ”

Kolman also touched on the gender representation in the organization’s helm, something that hasn’t been particularly well balanced for many years. The IPA has had only one female president in more than 50 years: Ana Maria Cabanellas, who was vice president and then president of the association between 2004 and 2008.

“It’s important that IPA’s leaders will now be gender balanced and show off the diversity of our organization,” Kolman said.

And, based on the usual process followed by the organization, Bodour’s election to the vice presidency puts her in line to succeed Setzer in two years’ time

For his part, Setzer, said, “We work to make a better world by bringing the creations of countless authors to as many readers as possible.

“We entertain, we educate, we bring curated scientific information to those who need it. It’s my mission to make sure that IPA brings that message to policy makers worldwide.”

And Bodour said, “I have never been more hopeful about our industry than I am today and what can be achieve together with IPA member support tomorrow.

“There are emerging industry issues that need to be addressed, freedom to publish injustices that deserve our collective attention, and publishers requiring our support to uphold their intellectual property rights.

“I look forward to discussing how we can work together to move the IPA and the publishing industry forward.”

More elections were part of the IPA’s statutory meetings and conferences during Frankfurter Buchmesse, and we’ll be reporting on them in the days to come.

Of special note to Frankfurt trade visitors this week is the news that Gvantsa Jobava, international manager for Tbilisi’s Intelekti publishing and the publishing program director of the fair’s Georgia Guest of Honor program, has been elected, along with several others, to the IPA’s executive committee.