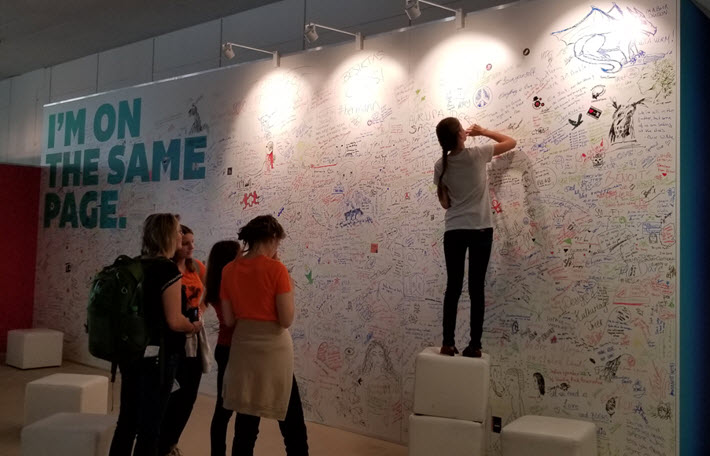 ‘The abridgement of the rights of a single individual is a breach against each and every one of us,’ the Library of Alexandria’s Ismail Serageldin, as Frankfurt’s #OnTheSamePage campaign rolls on.

In the lobby of Frankfurt Book Fair’s Hall 4.0, a big #OnTheSamePage wall drew the comments and observations of many fair goers. Image: Porter Anderson

‘Robust Compassion and Respect for Rights’

As Publishing Perspectives readers will recall, Frankfurter Buchmesse and the Börsenverein des Deutschen Buchhandels—the German Publishers and Booksellers Association—have joined forces to launch a campaign in recognition of the UN’s Declaration of Human Rights’ 70th anniversary.

The book fair, itself, is also in its 70th year in 2018, as Frankfurt’s Messe welcomes citizens to its traditional public-facing weekend. Themed “On the Same Page,” the program got under way with social media in September using the hashtag #OnTheSamePage, and events have been running at many points during fair week.

On Sunday (October 14), for example, there’s “Civil Society Under Pressure” at noon, and “Freedom of Expression in Putin’s Russia” at 2:30 p.m.

The Human Rights Declaration, of course, comprises 30 articles, each setting out an area in which no person’s rights are to be transgressed. You can read the entire text of the declaration at the United Nations’ site here. A colorfully illustrated edition with flip pages is also available at the UN’s site here, with artwork by Yacine Ait Kaci.

The book fair request some suggestions of good reading in the area of human rights, and some key thinkers on the issues of the day have provided input.

Here, we offer some of the literary tips they gave us, and we’ve made many edits, strictly for the sake of brevity so that we can offer you as many of their good tips as possible. 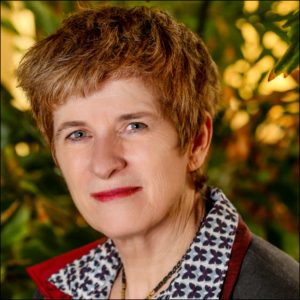 “As tough as human rights standards are at times to uphold; inconvenient as they are to those who seek to hold power without accountability and while under pressure they remain, nonetheless they endure. Their gift persists. No other values system has spread globally so rapidly, to be incorporated into so many constitutions, laws and policies the world over.

“Dozens of editions of the UDHR now exist, in print and digital forms, from plain language adaptations making it more accessible to all to beautifully illustrated volumes. No other text has been translated into as many languages – 500 plus so far , allowing people the world over to read the Declaration and claim their rights in their own tongue

“The journey for human rights over the last seven decades has taught us that while legal protections are essential, solidarity and leadership for rights are key.

“We owe much to the solidarity of civil society and of human rights defenders for what has progressed, and we need much more from official leaders to help bridge the gaps that remain – leadership that is rooted in robust compassion and respect for rights and not steeped in bigotry, fear or hatred.” 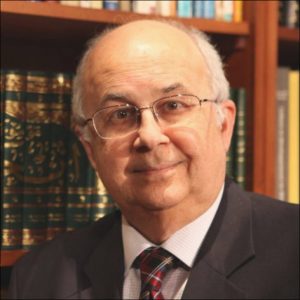 The founding director emeritus of the Library of Alexandria, Ismail Serageldin has published more than 100 books and monographs. When asked to recommend a book for the campaign #onthesamepage, he chose Jean Anouilh’s Antigone.

“Drawing on the famous ancient Greek play of Sophocles,” Serageldin writes, “Anouilh gives us a more complex characterization. Antigone, princess of the realm, stands up to her uncle Creon, who has taken power after a severe conflict and who decreed that the body of her brother should not be buried (which in ancient Greece meant that he could not join the gods in the hereafter).

“The play is therefore about the individual standing up against the power of the state in defiance of an unjust edict.

“The Creon of Anouilh is a realist, who confronts the problems of the state, and makes compromises because that is the only thing that can save the state.

“Human rights are indivisible. They are not given by the state, but belong to the individual by virtue of being a human being. There can be no compromises”Ismail Serageldin

“He indicates that he does what he does because it is his duty, not because he wants to. To save the city he does not have the luxury to reflect if innocent people are getting killed. His reasoning is seductive. But Antigone then challenges the slippery slope on which his eloquent exhortation takes us, by saying, ‘No—no to compromise. For once you will say ‘yes,’ you will pay for that yes, and you will continue to pay.’

“She says no and is willing to die for it.

“The logic of compromise on principle for expediency, for the ‘higher interests of the state,’ is one of the most insidious themes of modern times. And indeed, when compromises start, we do not know where they will end.

“We need to be reminded that human rights are about every single human being, and the condemnation of a single innocent person, the abridgement of the rights of a single individual is a breach against each and every one of us.

“Human rights are indivisible. They are not given by the state, but belong to the individual by virtue of being a human being. There can be no compromises. An important reminder as we celebrate the 70th anniversary of the Universal Declaration of Human Rights. Please take the time to [read or] re-read Anouilh’s Antigone.