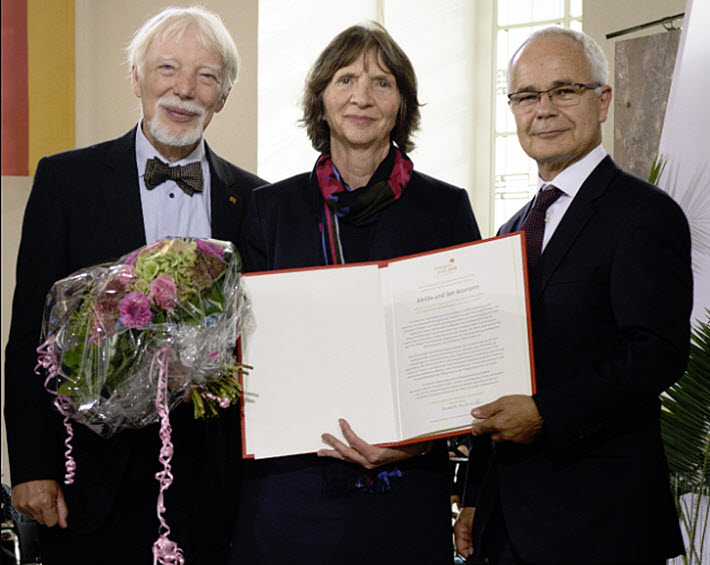 ‘Democracy thrives not on disputes, but rather on good arguments,’ say author-scholars Jan and Eleida Assmann in their acceptance speech in Frankfurt for the Peace Prize of the German Book Trade. 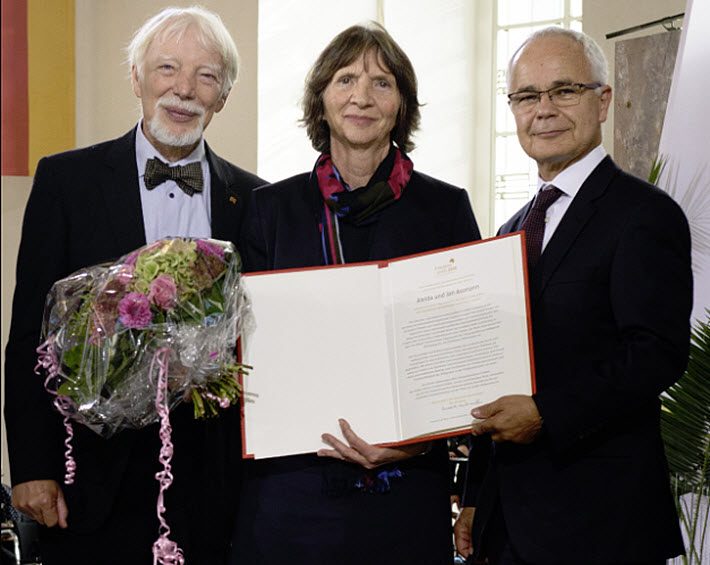 From left, Jan and Aleida Assmann and Heinrich Riethmüller at the award ceremony in Frankfurt of the Peace Prize of the German Book Trade. Image: Provided by the Börsenverein

As covered by Publishing Perspectives in June, Aleida and Jan Assmann were chosen as winners of the 2018 Peace Prize of the German Book Trade, which is given by the Börsenverein des Deutschen Buchhandels—the German publishers and booksellers association. On Sunday (October 14), the Assmanns were given the award in the Church of St. Paul in Frankfurt as the book fair came to a close.

The Peace Prize has been awarded since 1950 and is endowed with a sum of €25,000 (US$28,928). Established in 1950, the honor has been awarded annually on the final day of the Frankfurter Buchmesse ever since.

The presentation of the award to the couple was attended by some 700 people on Sunday, and a speech honoring the Assmann’s “lifetime achievements in two voices” was made by the German-American scholar Hans Ulrich Gumbrecht.

The Assmanns emphasized solidarity as a value of overriding importance today, in international relations, not just in national society—while on the same day, Bavarian voters were showing the depths of divisions occurring in German cultural politics today: here is Holly Ellyat at CNBC on the story.

“Cultures are able to cross borders [not only] through the import and export of books, but also by means of translations, appropriations, and reinterpretations.”Aleida and Jan Assmann

“It simply cannot be the case,” said the Assmanns in their joint acceptance speech, “that we endorse a neoliberal freedom of movement with regard to capital, goods, and raw materials, while migrants are stranded at national borders and we forget the people, their suffering and their future.

“The key question here is no longer whether or not we are going to succeed at achieving integration, but instead how we are going to go about achieving it. At the moment, it almost appears as if this development is moving backward. When the scope of public discourse is narrowed down to include only a few issues, this serves only to fan the flames of the debate while doing very little to assist in clarifying and handling current problems.

“Cultures are able to cross borders [not only] through the import and export of books, but also by means of translations, appropriations and reinterpretations. Through this contact with other cultures, all cultures are transformed: they overlap with one another, inspire each other and leave lasting changes on one another. It is not possible to bring cultures to a standstill, nor can they be confined to national boundaries.”

‘Not Every Dissenting Voice Deserves To Be Heard’

The couple spoke to the importance of consensus and individual discernment in modern democratic culture, saying, “In a democracy, the work of thinking cannot be delegated to experts, performers or demagogues. … While it is true that democracies gain in strength through disputes and debate, this does not mean that everything in a democracy is subject to negotiation.

“The work and research of Aleida und Jan Assmann provide a blueprint of how a modern society can learn from its past. For booksellers, bookshops and publishers in Germany, conveying these values is our own very special human duty.”Heinrich Riethmüller

“A democracy must have inviolable convictions and be based on a shared consensus, for example, in the form of a constitution, the separation of powers, an independent legal system, and human rights.

“Not every dissenting voice deserves to be heard. A voice that seeks to undermine the pillars upon which the diversity of opinion is built forfeits in that moment any respect it may have had.

“In other words, democracy thrives not on disputes, but rather on good arguments. Loutish behavior, verbal attacks, and the increasing use of polarizing symbols … can only lead to a state of general confusion, which, in turn, inevitably leads to a paralysis of democracy, ultimately rendering it incapable of carrying out important tasks.”

In his prepared statement, Heinrich Riethmüller, chairman of Börsenverein, argued that such cultural communication is of fundamental importance for the peaceful coexistence of humankind on the basis of the human rights proclaimed 70 years ago in the Universal Declaration of Human Rights.

“The work and research of Aleida und Jan Assmann,” he said, “provide a blueprint of how a modern society can learn from its past so as to be able to live in freedom and peace. And for us—that is, for booksellers, bookshops and publishers in Germany—conveying these values is our own very special human duty”, said Riethmüller.

You can find the full acceptance speech from the Assmanns, in English, here.