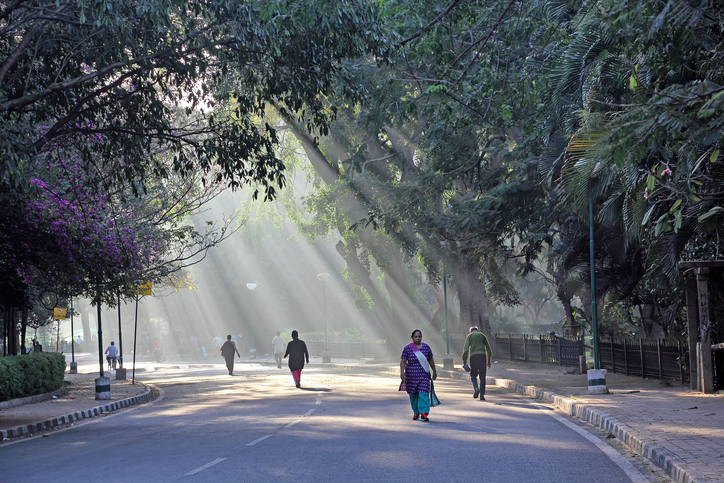 With ‘many more tie-ups and collaborations between English and Indian-language publishers,’ Taylor & Francis’ Nitasha Devasar reports that India’s book market today is in fast, positive evolution. 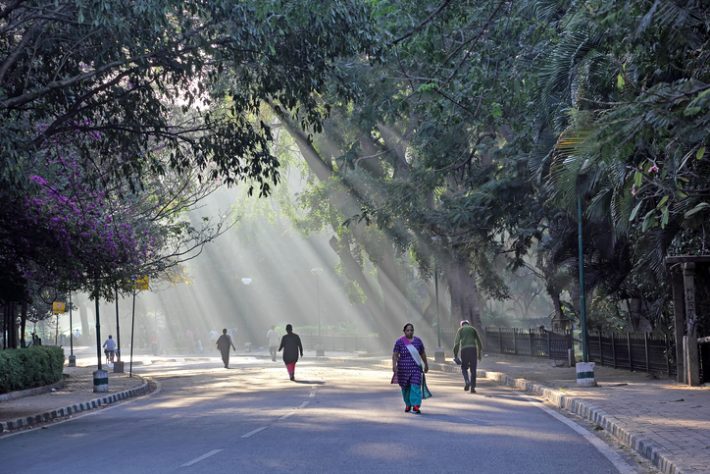 ‘There’s a Plethora of Players”

At the end of August, various news media in India were reporting and debating the announcements of two new literary awards, one for fiction and one for nonfiction.

“India’s market is big, varied, and segmented and that allows various ecosystems to survive, even thrive, simultaneously. That’s both the challenge and the opportunity of our market.”Nitasha Devasar

The award for fiction is the JCB Prize for Literature, which will announce its first shortlist on October 3. The top prize for this one is quite large: 25 lakhs (US$34,453) with an additional five lakhs (US$6,887) for the translator in the case of a translation winning the award.

The nonfiction award, the Kamaladevi Chattopadhyay New India Foundation Book Prize, also gets its first outing in October, during the Bengaluru Literature Festival, and it, too, comes with a handsome purse, a 15-lakh prize (US$20,662).

In Somak Ghoshal’s coverage at LiveMint.com, the key question is “Can these prizes change the landscape of literary publishing in India, where readers are increasingly gravitating toward mass-market books?”

And in the ensuing discussion, which includes commentary from Udayan Mitra, the publisher of literary work at HarperCollins India, and Westland publisher VK Karthika, it becomes evident that the size, shape, and evolving commercial pressures and opportunities of the Indian market are presenting an increasingly complicated scenario for the book trade.

Publishing Perspectives has turned to Nitasha Devasar. The managing director of Taylor & Francis India, Devasar is also the editor of a new book, Publishers on Publishing: Inside India’s Book Business (All About Book Publishing, April).

On the approach to the Frankfurter Buchmesse, Devasar provides a look at a fascinating market of many languages, cultures, and traditions. India is a remarkable market and—at times—a daunting one.

‘Both On- and Offline Players’ 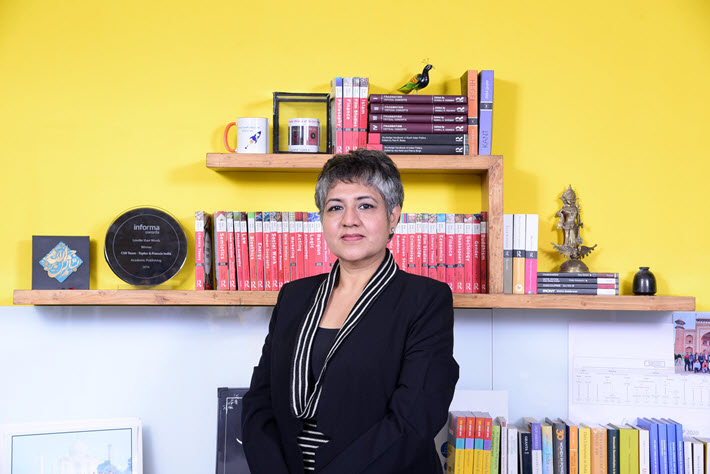 Publishing Perspectives: Can you start by giving us just the highest-level, broadest view of where Indian publishing stands today?

Nitasha Devasar: Indian publishing has always been volatile, yet resilient.

As a Nielsen 2015 study indicates, 94 percent of the market is in educational publishing and the bulk of that is K–12. Academic publishing forms a small part and has always been plagued by a shortage of library funds, piracy, and a highly segmented market. Add to this price sensitivity and a fluctuating and weak currency and things really do get exciting.

On the plus side, we have one of the largest higher-education systems in the world and the government has been focusing on digital resources for education in the last few years. So India is a market where print continues to sell, while e-resourcing is also growing thanks to special government funds and initiatives.

Further, there’s enough scale to sell in both academic markets and beyond in others, like professional, corporate, etc. As a result, there’s a plethora of players, more than 90,000 of them, according to Nielsen, including local, regional, multinational, and niche, as well as online content providers and media houses.

The supply chain is also changing and evolving in parallel, with both on- and offline players of varying sizes in the market. We get to hear a lot about these developments, from the key players, in Publishers on Publishing: Inside India’s Book Business

PP: How prevalent is digital publishing at this point in India?

ND: With better connectivity and cheaper data, Internet usage is high and growing, and 78 percent of this is on smartphones. A lot of what’s being consumed, though, is in local languages and is primarily social media, entertainment, and news.

On the academic front, for higher education, the government has the NDL or National Digital Library initiative, in which it’s now mandating the digitization of all research output of universities. There are free online learning programs for technical and vocational education, like SWAYAM and NPTEL. There are also plans to take entrance exams to key professional courses like those in medicine and engineering online. Publishers also have been educating institutional end-users about the availability and ease of e-resources.

So there’s very much a move to online, although we increasingly need to find ways of providing mobile-friendly formats.

The trend to ebooks in India has followed the global wave, first growing and then flattening and then declining—and now picking up slightly, although at a lower level than before. In addition, the print ecosystem is also being sustained as many local players and markets continue to devour print content.

India’s market is big, varied, and segmented and that allows various ecosystems to survive, even thrive, simultaneously. That’s both the challenge and the opportunity of our market.

PP: With audiobooks having made a digital comeback and selling forcefully in many world markets today, do you see a similar trend in India? 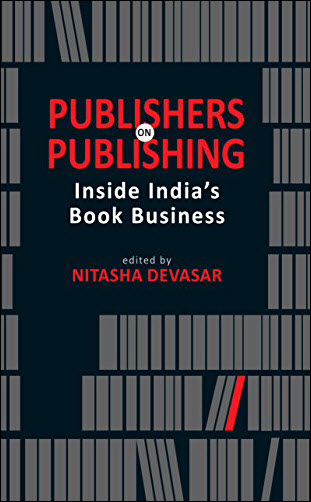 ND: This is an interesting question. On the one hand, one hasn’t seen audiobooks as a big trend here, at least not yet, although trade publishers do mention some pick up. On the other, the potential exists.

For example, we have the largest blind population in the world, about 15 million, who could potentially benefit from such offerings. Also, in our multi-lingual society, if local-language versions become available, these could have traction.

There’s some news that Amazon plans to introduce locally produced Audible books narrated by Indians and in Indian languages. Of course, as with all offerings in this market, getting the price level right would be the big challenge.

[Editor’s note: Here, in relation to Devasar’s mention of Audible and India, is Utkarsh Gupta at Inc42 in June, reporting on what she is describing: “Amazon plans to introduce locally produced Audible books, which will be narrated by Indians. For this, Amazon Publishing has signed a six-book deal with writer Chetan Bhagat, as part of which, it will publish these books globally in print, ebook, and audio formats, the first title of which is expected to be out in October 2018.”]

PP: You’ve brought up another challenge that many Indian publishers have mentioned to us—the tradition of very low prices for books. Does this persist?

ND: Yes, this market is very price sensitive and that’s a fact of life. This is true for all South Asia, including Nepal, Sri Lanka, and Bangladesh.

Publishers have learned to deal with it by pricing to market, offering special pricing for the most price-sensitive segments and staying with international pricing norms at the higher end of the spectrum for the more specialized, upper level, reference market.

For example, Taylor & Francis, which is celebrating 20 years in India, has, by judiciously reprinting relevant titles at affordable prices, increased its reach six-fold to students at 3,500 higher education institutions in the region, which would otherwise not have been possible.

PP: One of the most fascinating characteristics of the Indian market, of course, is the country’s many languages. Do you see publishers responding to the opportunities to do more translation for “internal” languages (meaning those spoken within India), or is it still slow going in this regard?

“On selling rights, for nonfiction and academic works, anecdotal evidence suggests that looking East has proved to be a good strategy for many Indian publishers.”Nitasha Devasar

ND: It’s interesting that you ask this: translations have never had it better and the same goes for regional language content.

This growth will be supported by deepening penetration through cheaper devices and high-speed Internet and IL-enabled handsets, mandated by the government starting in February of this year.

Of course, at this stage, the content being consumed in specific Indian languages is primarily entertainment and news, and there’s a dearth of other types of regional language content, especially of the technical variety.

Usage is highest in a handful of languages like Telegu, Tamil, Hindi, and Gujarati and not in all the 33 official Indian languages we have, so these are in focus. Also, 99 percent is reported to be accessed on mobile phones.

Getting to viable commercial models for IL content (and on the go), where price sensitivity is even higher than in English, is also a challenge. In the future, there’s the potential for technology to break down language barriers—automatic instantaneous AI translation—and that’s something that Taylor & Francis is exploring in some markets.

PP: Lastly, do you have a sense for how successful India’s publishers feel they are today in terms of making sales of foreign rights for their books?

ND: My own experience is with academic and research work, which is primarily in English, and India’s growth rate is among the fastest growth in the world. In fact, it would be fair to say, that the geography of research is shifting to Asia, with Chinese and Indian research output growing much faster than the Western world. So  at Taylor & Francis India, we focus on both selling our global content in India and on taking local content to world markets through our global publishing programs. This is working well for us.

On selling rights, for nonfiction and academic works, anecdotal evidence suggests that again, looking East has proved to be a good strategy for many Indian publishers and that these translations have travelled well.

At the Frankfurter Buchmesse, Taylor & Francis will be exhibiting in Hall 4.2 (H11).

More from Publishing Perspectives on the Indian market is here. And more on Frankfurter Buchmesse is here.