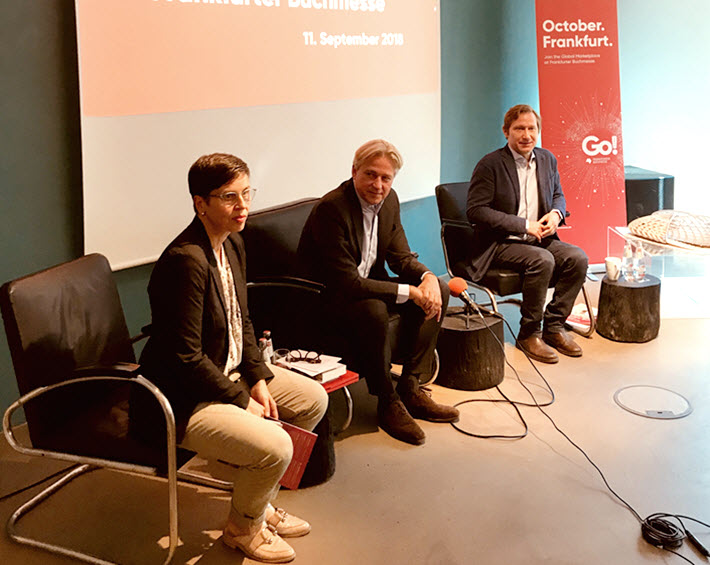 At a pre-fair news conference, Frankfurter Buchmesse officials stress the importance of the freedom to publish and the international book industry’s role in a politically charged era. 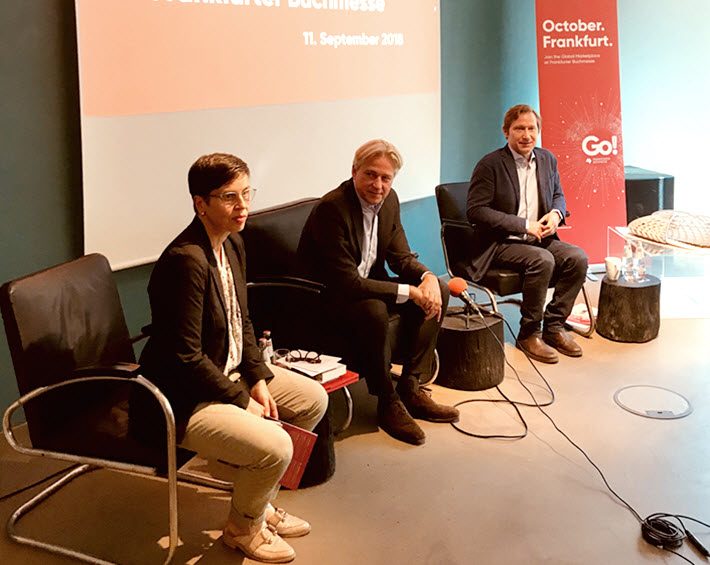 ‘Part of Our DNA’

At today’s (September 11) news conference on the upcoming Frankfurter Buchmesse (October 10 to 14), the emphasis went squarely to the political turbulence of the times and to the book fair’s stance as a player and an advocate for the freedom to publish.

It fell, after all, not only 0n the 17th anniversary of the 9/11 attacks in the United States but also on the date of Simon & Schuster’s release of Bob Woodward’s bombshell book Fear: Trump in the White House. (In Germany, Furcht: Trump im Weißen Haus is to be released on the second day of Buchmesse, October 11, by Rowohlt.) German voters face state elections in Bavaira on October 14 and in Frankfurt’s state of Hessen on October 28, while the American electorate’s potentially pivotal midterm elections are scheduled for November 6.

And as the Buchmesse’s director Juergen Boos made clear in his comments at the annual news event for members of the media, the world’s largest trade show for the international book industry sees its mission in such charged political times as one of engagement with the realities on the ground.

“The most internationalized book fair, since its reopening in 1949 after the Second World War, stands for free speech and the freedom to publish—for international networking and dialogue. 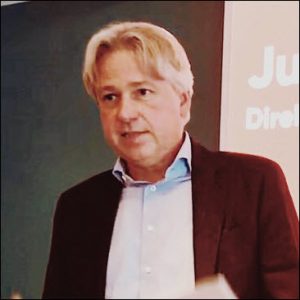 “The 70th Frankfurt Book Fair will be held in political times. And for us, as for all other international book fairs, the key principle is to facilitate discussion, especially on controversial issues. Book fairs endure polarizing authors and opinions, understanding that support for debate is an achievement in a democratic society. These principles are part of our DNA.”

Particularly in the current events programming for its Weltempfang stage in Hall 4.1 (B81) and in the the new Frankfurt Pavilion, debates will look at the tension between power and morality, between questions of immigration and cross-border relationships.

As Publishing Perspectives has announced, the Nigerian author Chimamanda Ngozi Adichie is speaking at the fair’s opening press conference. The Guest of Honor nation at the fair, Georgia, also holds a place in the politically relevant context of the fair’s presentation this year. As Tbilisi-based publisher Gvantsa Jabova has told us, there is a level on which becoming Frankfurt’s Guest of Honor is for Georgia an act of resistance to Russian—and formerly Soviet—hegemony.

There’s a specific site, Georgia: Made by Characters, for the Guest of Honor project this year, and at the Frankfurter Buchmesse site, you’ll find more here.

Figures from the political world expected at Buchmesse this year include Mamuka Bachtadse, the Georgian prime minister; Federica Mogherini, the European Union’s high representative for foreign affairs and security policy; and Monika Grütters, minister of state for culture and media.

While Publishing Perspectives has specific stories on many parts of the upcoming program in Frankfurt here, several areas of interest were brought into focus in today’s news conference. 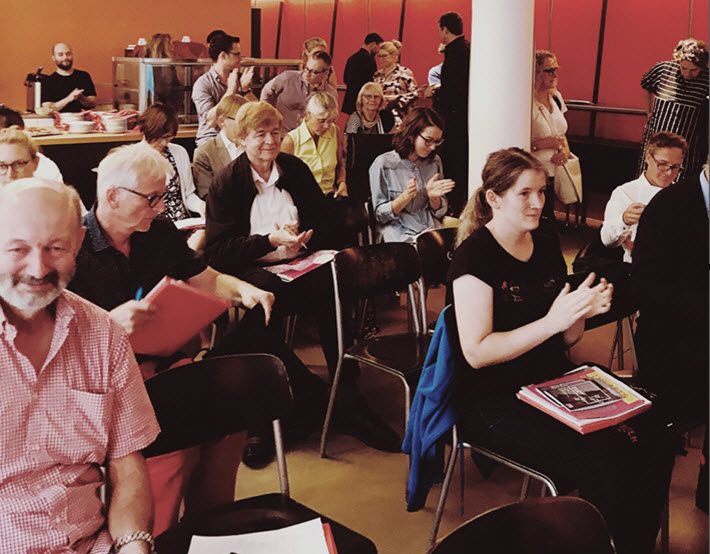 It was reported by the book fair’s administration that another record has been set this year for participation in the “LitAg,” the Literary Agents and Scouts Center at the fair, in which international rights meetings and transactions reflect the heart of the trade show’s annual leadership. this year, there’s been a 5.6-percent jump in the number of participants, organizers said, with the key growth areas comprising North America, Canada, Africa, and Southeast Asia. For the first time in years, Cuba is represented with a joint stand at the fair, too.

“The most internationalized book fair, since its reopening in 1949 after the Second World War, stands for free speech and the freedom to publish–for international networking and dialogue.”Juergen Boos

Last year’s LitAg operation featured 788 agents and scouts from 33 nations, and the fair’s total trade visitors numbered 172,083—representing 137 countries. In terms of exhibitors, the 2017 fair reported a total 7,300, arrayed in the various show floors of the Buchmesse complex in Frankfurt.

At the combined African nations’ stand representing 19 nations’ publishers in Hall 5.1 (B125), a several-day program called “Lettres d’Afrique Francfort: Changing the Narrative” is being designed to  focus on issues and opportunities in the continent’s industry. Countries engaged in the program this year include Angola, Ethiopia, Ghana, Cape Verde, Nigeria, and Senegal.

Another focus of the fair is the ASEAN (Association of Southeast Asian Nations) region in a new forum set in Hall 4.0 (B106), with representation from, among other nations, former Guest of Honor country Indonesia, as well as Malaysia, Singapore, Thailand, Vietnam, and the Philippines. A three-day event, the forum is looking closely at the kind of cross-border synergy can be found in these countries’ developing publishing industries, from academic and children’s books to support for translation efforts.

Frankfurt EDU is a new international program for innovative concepts, content, and technologies in the education sector, as Boos pointed out. Exhibitors in the education sector will be in Hall 4.2 (international exhibitors) and 3.1 (German exhibitors). The program includes new platforms and formats being presented in Hall 4.2 an the Education s, in the EdTech area and in the LAB program, described as an interactive educational laboratory.

Organizers also say they see growth this year in children’s and youth’s reading sectors. Hall 5 will be featuring books from European countries, Latin America, and the Arab world, with a “Frankfurt Kids” focus area for networking and business in the 5.1/6.1 foyer area adjacent to Hall 6. On the Sunday of the fair, a “family day” program with emphasis on children’s content will be at the Frankfurt Pavilion.

As covered earlier at Publishing Perspectives, the fair has created a special #OnTheSamePage campaign to reflect the corresponding 70th anniversary of the United Nations’ Universal Declaration of Human Rights. For this, it’s reported that many booksellers have created displays on human rights, as publishers are organizing readings and events. Amnesty International will be providing a focal display in the form of a two-meter-high XXL Book of Universal Declaration of Human Rights, and THE ARTS+ program—we covered it earlier here—has a Saturday concentration on the topic in Hall 4.1 (D14), including talks on human rights, much of which is to be taped and broadcast in November.

Also covered previously in our pages, the fair’s BookFest is in expansion this year, having proved popular throughout the city of Frankfurt last year.  In-town venues are to include Walden, Libertine Lindenberg, Club Michel, 25hours – The Trip, the English Theatre, Deutsches Architekturmuseum (the German Architecture Museum), Genussakademie and others.

More from Publishing Perspectives on the international industry and the freedom to publish is here, and on Frankfurter Buchmesse here.