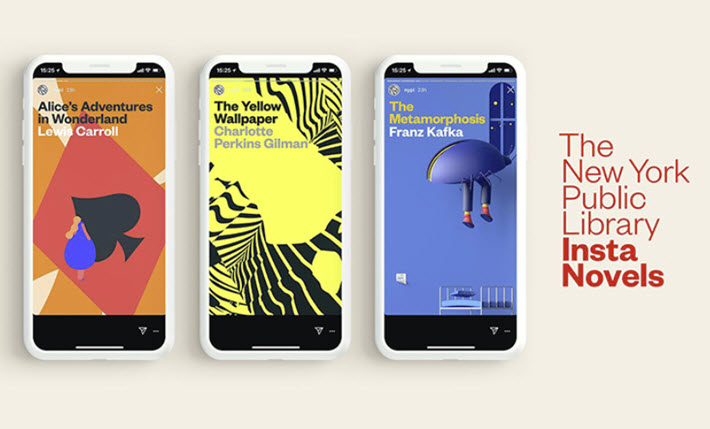 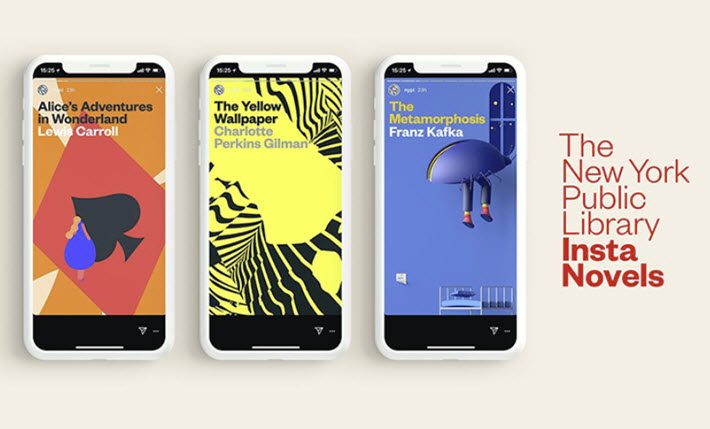 Thumbing Through the Classics

Found at the library’s Instagram account (@nypl), the first of the Insta Novels to be launched is Lewis Carroll’s Alice’s Adventures in Wonderland (Parts 1 and 2). The series is illustrated by Magoz (@magoz). Two other pieces are in the pipeline for release: the short story “The Yellow Wallpaper” by Charlotte Perkins Gilman, with illustrations by Buck (@buck_design), and Kafka’s The Metamorphosis, with illustrations by César Pelizer (@cesarpelizer).

In media messaging, the library’s staff writes, “The full book, short story, or novella is uploaded into Instagram ‘Stories,’ complete with unique and engaging design elements. The Instagram-specific design includes stills and videos that mirror the unique layouts of the original works. The background is a warmer white that’s easy to read on screen, and the font is Georgia.”

The delivery dynamic, itself, is interesting: “Readers rest their thumbs on the screen to hold the page. They lift their thumbs to turn the page. The thumb holder also doubles as a flip book: if a reader lets the book run they see an animation.”

Because the “Highlights” feature is used to save each novel as a work of digital literature for readers to access when desired, a user’s “Highlights” becomes a digital bookshelf.

The library has worked with the advertising agency Mother New York to produce the pieces, and in a prepared statement, Corinna Falusi, partner and CCO of the company, is quoted, saying, “Instagram unknowingly created the perfect bookshelf for this new kind of online novel.

‘Is Anyone Truly Clamoring for Real Stories on Instagram?’

“From the way you turn the pages, to where you rest your thumb while reading, the experience is already unmistakably like reading a paperback novel. We have to promote the value of reading, especially with today’s threats to American system of education.”

And speaking for the library, Carrie Walsh, who heads external communications, is quoted, saying “This project is directly in line with the Library’s mission is to make the world’s knowledge accessible to all.

“It’s appropriate that one of the works we’re using is The Metamorphosis, because in collaboration with Mother, we are completely transforming the way people look at this popular social media platform, and reimagining the way people access the classics.”

The library today serves more than 18 million patrons, bot in New York City and internationally. Mother, which was founded in 1996 in the UK, has offices in London, New York, Los Angeles, Shanghai, Singapore, and Buenos Aires.

As Sarah Cascone writes in Artnet News’ report on the release of the library’s new initiative, “It remains to be seen whether anyone is truly clamoring for real stories on Instagram—the app has been repeatedly criticized for offering unrealistic, glamorized portraits of its users—but it is an ingenious way to try [to] get people reading.

“The Insta Novel has been conceived as thing like a gateway drug for non-Instagram-based reading.

“The NYPL hopes it will encourage Instagram users to seek out ‘traditional’ ebooks, either by accessing thousands of public-domain works on the SimplyE e-reader app, or by applying for a digital NYPL card to borrow other works from the full ebook collection IRL [in real life].”

Below is a promotional video for the library’s new Insta Novels program.

More from Publishing Perspectives on libraries is here.