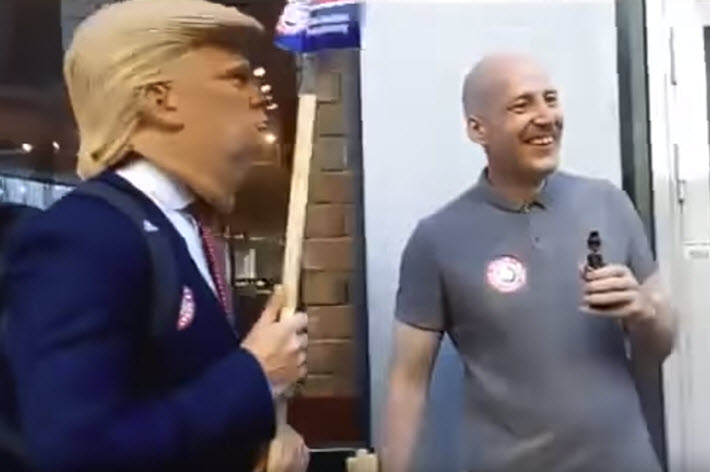 A pro-Trump weekend intrusion at a London bookstore described by its perpetrators as an ‘ambush,’ has sent shudders through the industry and leads the store’s manager to call for vigilance. 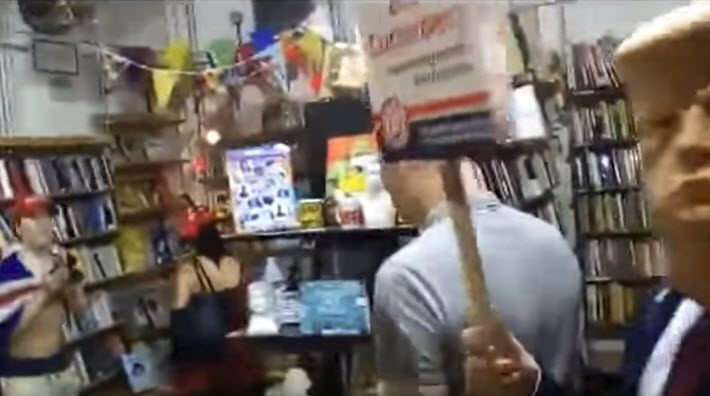 ‘We Can’t Be Cowed by the Forces of Intolerance’

Chanting “We love Trump” and “Trump, Trump, Trump, Trump,” a group of some 12 protestors entered a bookstore in London’s Bloomsbury on Friday evening (August 4) and performed a chaotic but damaging action they can be heard on tape calling an “ambush.”

Some of the group’s members wore “Make Britain Great Again” caps and one wore a full-head Donald Trump mask and carried a placard that said, Zuck Off, Cuckerberg: Stop banning patriots from Facebook. Other placards read Good Bye Fake News: British Bolshevik Cult, as mentioned in the BBC’s short report from Sunday (August 5).

Bookmarks identifies itself as a socialist shop and, as Katherine Cowdrey at The Bookseller clarifies in her write-up today (August 6), the store’s inventory features books on topics including Marxism and women’s and LGBT+ rights. At Newsweek, Dan Cancian notes that the store is the official bookseller of content for the UK’s Trades Union Congress.

Reports indicate that no one was hurt in the incident, but it’s clear from video of the event–taken by one of the group’s members–that this is thanks largely to the calming reception of the intrusion by shopkeeper Noel Halifax. Books were thrown about the store and signage was ripped up. The event is, at best, an act of daylight vandalism and a ransacking of some of the products the store had on display when the group went in.

The video was posted to YouTube on Sunday (August 5), picturing unruly men (and at least one woman) from the People’s Charter Foundation. The posting account, Rifflicious, states that the video had been posted originally to the organization’s own channel and then was taken down. Its originally posted slug is “Make Britain Great Again Invades Communist Bookstore.”

The video also was preserved and reposted to YouTube by Far-Right Watch here.

‘Can Easily Turn Into Violence’ 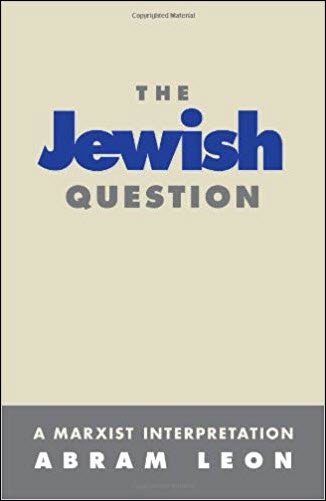 Leon Abram’s book (Pathfinder, 1971) was one of the books singled out by the intruders at Bookmarks

Watching the tape, almost 13 minutes long, reveals both how disorganized, inept, and almost comically uninformed the group was, and yet how dangerous and unacceptable an action of this kind is. Merchandise is damaged by the unrepentant participants in an intrusion that’s clearly meant to intimidate and demean the store’s staffers and customers.

Multiple press reports confirm that the Metropolitan Police say a first call came in at 6:35 p.m. A second call is said to have told the police that the protestors had left. No arrests have been made and the police statement added that the store’s ownership is to be interviewed about the event.

Apparently by ringing the shop’s bell loudly, the bookseller, Halifax, was able to alert the store next door of a problem, and that neighboring store made the calls to the police, per Halifax’s comments to The Bookseller’s Cowdrey.

Alison Flood at The Guardian reports in a follow-up on Tuesday, London time (August 7) that the store is being warmly supported with donations to help bolster security and replace damaged stock.

‘I Hope Your Shop Burns Down’ 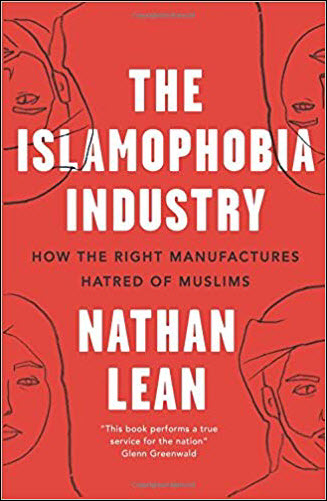 Nathan Lean’s book (Pluto Press, second edition 2017) is another book derided by the protestors at Bookmarks

As alarming as the event is to see, simply in watching these young men rail about books the find in the store on Islamophobia, Judaism, and even Robert Verkaik’s Posh Boys: How the English Public Schools Ruin Britain, one of the most chilling lines is heard near the end, “I hope your shop burns down.” Other taunts include “Where’s your books on pedophilia?”

The report (August 6) by Mattha Busby at The Independent carries a portion of the video and says that the intrusion on Saturday evening followed another “Make Britain Great Again” protest nearby of Facebook’s recent suspension of Alex Jones’ of his Infowars conspiracy site.

As it would happen, today, not only Facebook but also Apple and YouTube have moved to ban Infowars and Jones entirely, as Bill Chappell and Anastasia Tsioulcas report at National Public Radio. Spotify had acted to ban the the content last week. Stitcher, on Thursday (August 2) had become the first of the platforms to completely purge the Jones and Infowars content, as the others now have done, writes Aja Romano in a report at Vox.

And at The Guardian, Bookmarks manager David Gilchrist has written an opinion piece, headlined When the Far Right Targets Books, It Should Ring Alarm Bells for Us All. In the piece, Gilchrist writes that another bookshop in London, Gay’s the Word, had its windows smashed in April. “Again, no one was hurt, and there’s no reason to think the attacks are related,” Gilchrist writes, “but they certainly take place in an atmosphere in which racists, bigots and the far right in general feel emboldened.”

“The most important outcome will be if more people learn the true meaning of solidarity—that an attack on one is an attack on all.”David Gilchrist, Bookmarks

Not unlike mounting concern in the United States for the safety of news reporters, particularly those covering Trump rallies and many who are getting death threats, Gilchrist is saying, there is genuine danger inherent even in the most bumbling disruption by angry activists of a bookstore. “Donald Trump’s election as United States president,” he writes, “has released a feeling among some on the hard right that it’s now OK to say out loud things that had been made unacceptable—and that feeling can easily turn into violence, as we found on Saturday.”

Gilchrist goes on to say, “It’s not just Trump. Here in Britain, we’ve seen the emergence of organizations such as the ‘anti-extremist’ Football Lads Alliance, which has targeted Muslims and prominent black figures such as MP Diane Abbott. The movement that has gathered around Tommy Robinson, the founder of the far-right English Defense League, is another recent example.”

Gilchrist writes that a “fantastic response” has “let us know that we’re not alone” since the attack on Saturday, “and that people understand the value of independent bookshops in a world dominated by big business.” He concludes, however, warning that the incident “shows that we can’t be cowed by the forces of intolerance and the far right. The most important outcome will be if more people learn the true meaning of solidarity—that an attack on one is an attack on all.” 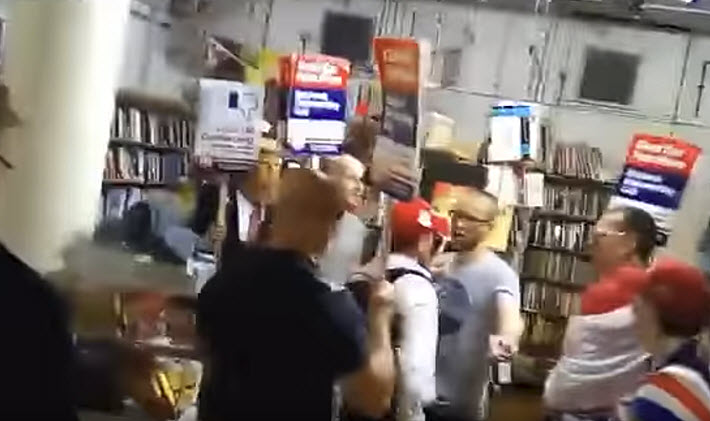