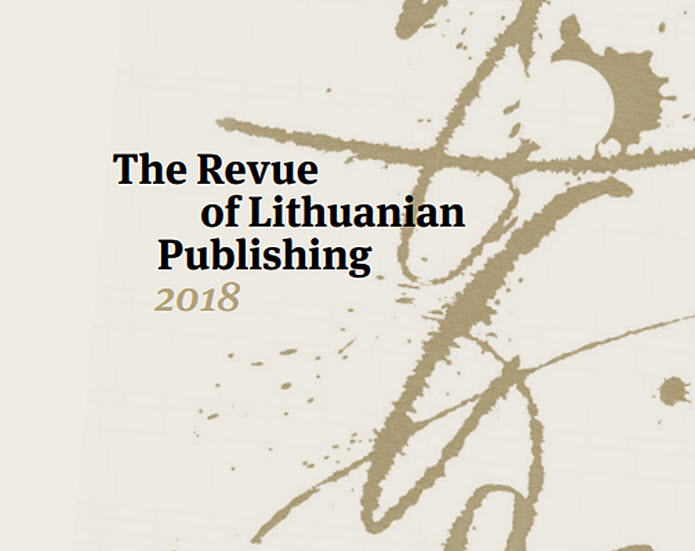 ‘The main barriers to reading books in Lithuania are the lack of time and the lack of interest.’ In a forthright assessment, the Lithuanian Publishers Association looks at its challenges. 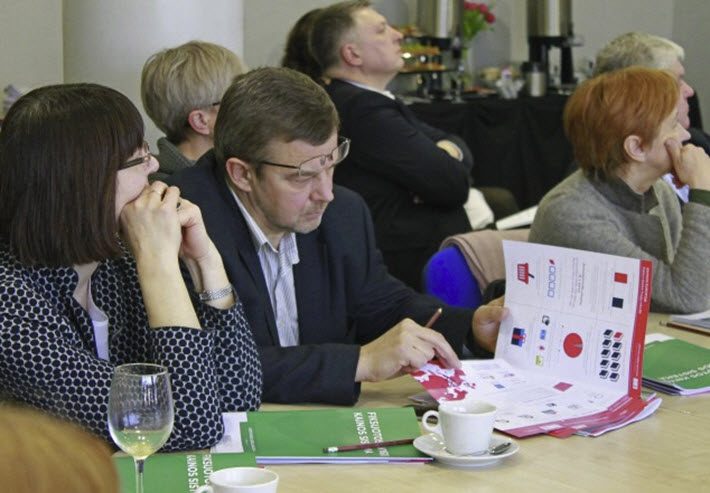 At a 2017 meeting of the Association of Lithuanian Publishers. Image: LLA

In its new assessment of its publishing industry, Lietuvos leidėjų asociacija—the Lithuanian Publishers Association—points to what it says are developments it shares with other Eastern European markets in recent decades, citing:

The era reviewed in this 17-page 2018 report (PDF) puts an eventful contextual frame around the contemporary picture from one of the three Baltic nations represented at this year’s London Book Fair Market Focus.

For example, from 1990 to 1992, the publishers association reminds us, profits for publishers could run as high as 300 percent. “It was possible to sell several hundred thousand copies of one book,” the report writes, in a country that today has some 2.9 million people. The number of new publishers was increasing so quickly that the market’s overall count went from 71 in 1990 to 500 in 1992.

That skyrocketing growth led to a precipitous reversal, after the 1993 introduction of Lithuania’s national currency, following the country’s 1990 return to independence. “Books became a luxury product,” the report’s narrative has it. “Publishing stopped being a profitable business. By around 1998, the local publishing market stabilized and was saturated. The Russian Financial crisis dealt a painful blow to the Russia-orientated Lithuanian economy. By 1999 book sales dropped by one third.” 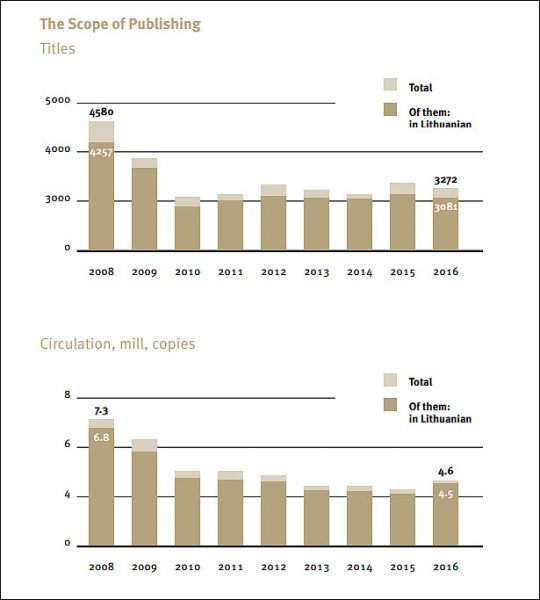 Consolidation followed, as did what the association describes as increased attention to bookselling and product quality, as well as to state-subsidized publishing projects, some 174 in 2006 and, by 2011, only 99.

Today, the report tells us, there again are more than 500 companies identified as book publishers in Lithuania, but more than half of them released only one title each in 2016. Some statistics from that year include:

In terms of digital publishing, the sector holds “a niche position” in the market, according to the report, representing only some 2 percent of the overall business and comprising about 1,000 titles. Digital books were introduced to the market in 2011. Nevertheless, the report says, “almost a third of Lithuanian publishers publish digital books, and 43 percent [say they] are planning to do so in the future.” 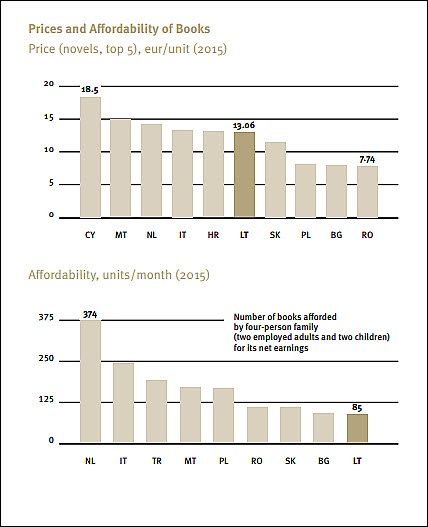 Pricing is a key consideration in the report’s purview, and it’s worth quoting the text of the publishers association here at some length:

“In 2016, residents of Lithuania spent €221.6 million on printed matter. On a per capita basis, the average Lithuanian spends €77 annually.

“In the total consumption basket, expenditures on printed matter comprises 0.89 percent of the value (0.85 percent in 2008); by comparison,
the figure is 1.1 percent for the European Union” overall. “Almost a third of expenditures on printed matter is on books (€80.4 million in 2015), slightly more than 39 percent (€85.7 million euros) is spent on periodicals, while the rest is on the purchase of various printing and stationery and drawing materials.

“The biggest structural change in 2008–2016 was the decrease in expenditures on periodicals.”

What worries the authors of the study is that by comparison to other parts of the EU, Lithuania’s books are hard for citizens to afford. “Based on the average income of a standard family (two working adults and two children), the affordability of books in Lithuania,” the report says, “is the lowest among EU countries which has provided data.

“A Lithuanian family could buy 85 popular books with their monthly income, while in Poland, the number is 168, and in the Netherlands, the number is 374.”

A key reason for the high cost of books, the association says, is the small size of the market. “Approximately 60 percent of the cost of publishing a book, such as translation, editing, proofreading, layout and design, is fixed and independent of the” sales results. 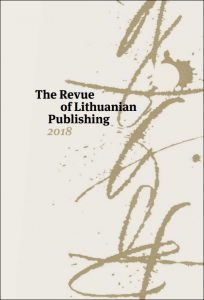 And the Lithuanian market, not surprisingly, is facing many of the same pressures that other world publishing markets are encountering today. In a well-focused, tight list of its four top challenges, the association lists:

As it turns out, Lithuania’s readership appears to exceed other populations in the European Union in levels of activity. In Lithuania, 74 percent of women and 58 percent of men said they read a book in the last 12 months, while in the EU, the numbers were 64 percent for women, 72 percent for men (according to Eurobarometer figures the association is citing).

The report indicates that in 2016 the country had 139 bookshops in operation, and it discusses those stores’ efforts to diversify their merchandise and to feature community-building events to encourage business, much as we see in other nations’ bookstore networks.

But although the report carefully goes on to parse reading habits in several ways, including looking at patterns in both rural and urban parts of the country, the conclusion is very much that heard in so many parts of the international trade book industry today, again worth quoting at some length:

“The main barriers to reading books in Lithuania are the lack of time and the lack of interest. Eurobarometer survey results in 2013 confirm that changes in modern life have more influence on customers, including the faster pace of life, the changing lifestyle and leisure activities, and the use of other media.

“The pace of modern life influences the development of entertainment and the spread of media which require less effort than reading books. Therefore, reading is being replaced by audio-visual information, which is faster and more convenient to use for people who have weaker reading needs and habits.”

The Lithuanian Publishers Association was founded in 1989, just in time to watch the arc of the industry’s development from that heady period in the early 1990s to now.

Our thanks to the Aldus European Bookfairs Network for access to the Lithuanian report. More from Publishing Perspectives on Aldus is here.