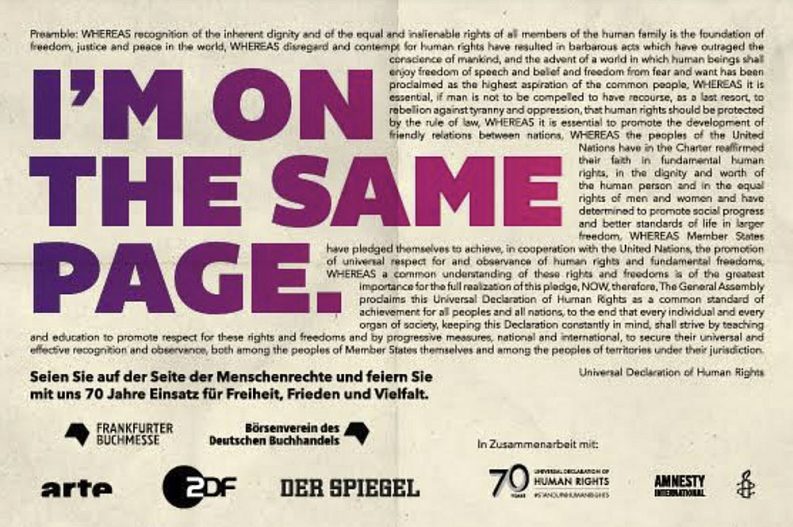 The Frankfurter Buchmesse and the German Publishers and Booksellers Association celebrates 70 years of the Universal Declaration of Human Rights, enacted in 1948, with the #OnTheSamePage campaign. 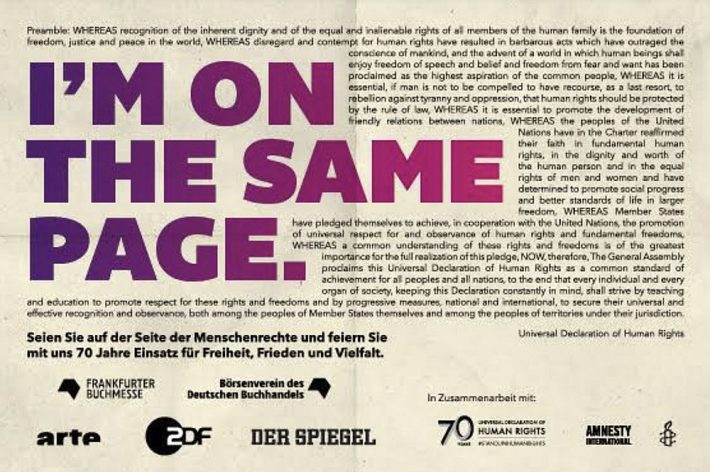 A graphic for the new ‘On the Same Page’ campaign for human rights features the text of the Universal Declaration of Human Rights preamble. Image: Frankfurter Buchmesse

In observance of the 70th anniversary of the Universal Declaration of Human Rights, Frankfurter Buchmesse and the Börsenverein des Deutschen Buchhandels—the German Publishers and Booksellers Association—are launching a campaign on human rights today (August 9).

Themed “On the Same Page,” the program is to get underway with social media in September using the hashtag #OnTheSamePage. Special events are being planned for the new Frankfurt Pavilion, which will be inaugurated this year in Buchmesse’s Agora. Those activities are expected to include appearances from authors and industry specialists including Paul Beatty, Dmitry Glukhovsky, Cixin Liu, Meg Wolitzer, Deniz Yücel and Juli Zeh.

As it happens, the book fair (October 10 to 14) is also celebrating its 70th anniversary this year. And the new campaign invites booksellers to put together displays of selected books relative to human rights issues, while publishers will be urged to consider organizing readings an other events themed on the topic.

Participating retailers and publishing houses will be provided with a package of campaign materials free of charge, and they can use them for promotion and visibility around their programming.  A page has been created at the Frankfurter Buchmesse site, with a downloadable kit of Web assets and information on registering by sending an email to samepage@book-fair.com.

The Frankfurter Buchmesse and the Börsenverein des Deutschen Buchhandels—with support from the United Nations and Amnesty International—are to be joined by Der Spiegel and television outlets ARTE and ZDF in calling on the world’s book and media industries to participate.

The Universal Declaration of Human Rights, of course, is likely to gain new interest, at a time when political forces in many parts of the world are challenging long-held and cherished values in individual freedom and mutual respect at both the personal and civic levels. The document was consecrated on December 10, 1948, by the UN’s General Assembly, Action 217A, as was created as “a common standard of achievements for all peoples and all nations.” Since its appearance, it has been translated, according to UN

US First Lady Eleanor Roosevelt chaired the drafting committee for the United Nations’ document, which is widely understood to have been the first proclamation that fundamental human rights should be universally protected–that no place or person could or should be exempted from the right to “freedom, justice, and peace in the world.” 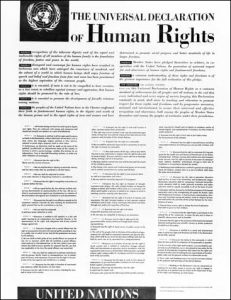 Read the Universal Declaration of Human Rights in PDF here

The declaration comprises 30 articles, each setting out an area in which no person’s rights are to be transgressed. You can read the entire text of the declaration at the United Nations’ site here. A colorfully illustrated edition with flip pages is also available at the UN’s site here, with artwork by Yacine Ait Kaci.

Many elements of the declaration’s text are striking for their modernity, even prescience, in regard to issues that challenge people and their societies these 70 years after its introduction. 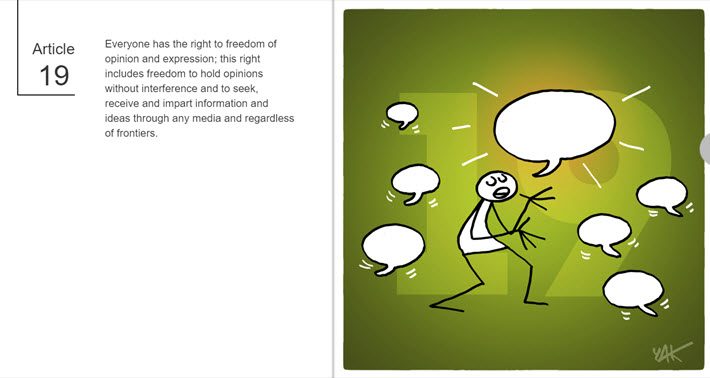 Of particular interest to world publishing industry players, the Universal Declaration of Human Rights’ Article 19–here in the illustrated edition with artwork by Yacine Ait Kaci–says, ‘Everyone has the right to freedom of opinion and expression; this right includes freedom to hold opinions without interference and to seek, receive and impart information and ideas through any media and regardless of frontiers.’ Illustrated edition from the United Nations

‘Imperative We All Stand Up’ 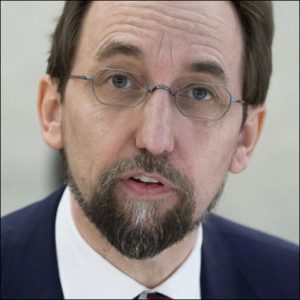 In recognizing the new initiative from Frankfurter Buchmesse and the Börsenverein, Zeid Ra’ad Al Hussein, the UN High Commissioner for Human Rights, has issued a statement, saying, “As the fundamental values of the Universal Declaration are being challenged in many parts of the world, it’s imperative we all stand up and reaffirm our commitment to these values which are essential if we are to keep our societies free, fair and stable.

“Everyone can make a difference by standing up for the rights of others, and this initiative by Frankfurter Buchmesse and the Börsenverein des Deutschen Buchhandels is a very welcome effort to mobilize booksellers and publishers worldwide to ensure we are all on the same page.”

As it happens, Al Hussein concludes his five-year posting with the United Nations’ Office of the High Commissioner at the end of this month. And in a recent interview with the BBC, you can hear him warn of policy being be created on “a very narrow agenda” in many spheres of the fast-rising populist right: “It’s an attack on the international system as a whole,” he says. 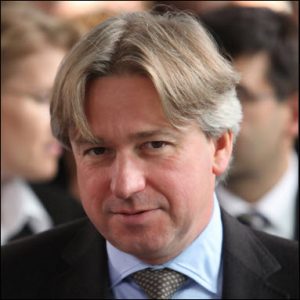 Speaking for the book fair, its director, Juergen Boos, says, “Frankfurter Buchmesse brings together hundreds of thousands of people from every part of the world.

“Together with political institutions, media partners, and members of our industry, we want to set an example of a peaceful meeting of cultures, thereby making it clear that the Frankfurter Buchmesse platform, this ‘stage for world affairs,’ only works because basic liberal principles and respect for the other are considered non-negotiable values here.”

Calling attention to Article 19 of the declaration, which reads, in part, “Everyone has the right to freedom of opinion and expression,” the Börsenverein’s managing director, Alexander Skipis, says, “Wherever human rights are attacked, wherever people are locked up solely for their beliefs or are bullied by the state for their writing activities, we must not look away.

“The historical responsibility for the behavior of our institution and other members of the German book industry from 1933 to 1945 alone demands this. One of our most important responsibilities is the dissemination of free speech. We would like to make a significant contribution to the success of a free society.

“Freedom of opinion and expression is fundamental to our work. Yet, around the world, we are witnessing booksellers being imprisoned, publishers ousted and journalists exiled. In these cases, it isn’t just appropriate, but our duty to raise our voices. In so doing, we are standing up for the rights of every human being.”

Skipis adds that the campaign will be strengthened by self-initiated actions and programming among industry players. “I would be delighted if bookstores and publishers developed their own actions under the aegis of the campaign,” he says, “which will be especially powerful if as many different voices as possible from our industry are present, encouraging engagement with the issue from many different angles.” 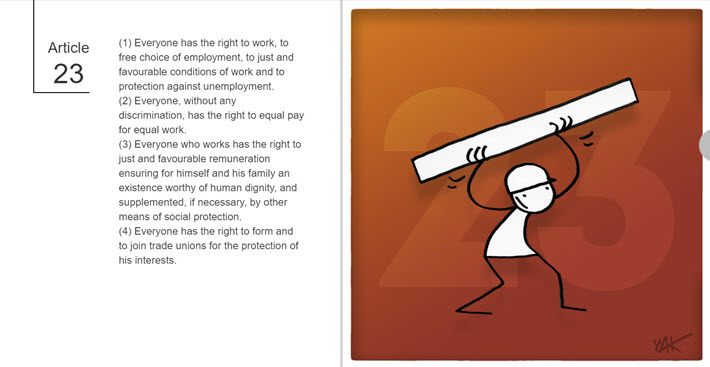 Those who were aware of Black Women’s Equal Pay Day this month in the United States may be interested to note that in 1948, the Universal Declaration of Human Rights’ Article 23 called for ‘the right to equal pay for equal work … without discrimination.’ Illustrated edition from the United Nations