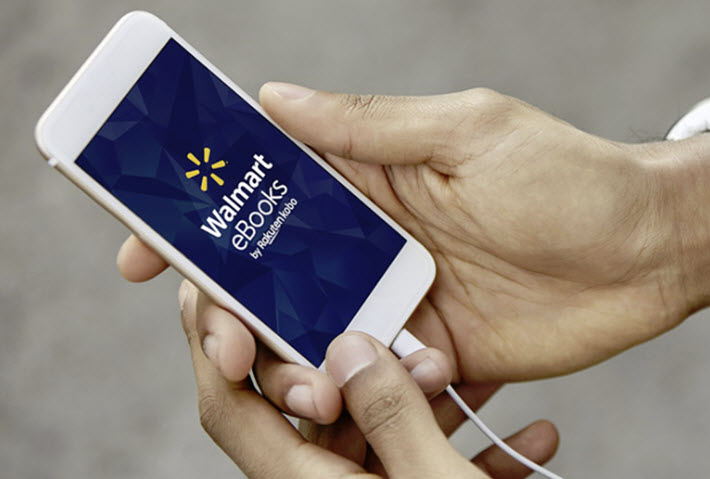 Touting 6 million ebooks and a $9.99 audiobook subscription, the new Walmart partnership with Rakuten Kobo gives the Canadian retailer what it hasn’t had in the US market: brand recognition.

On Tuesday (August 21), Walmart eCommerce’s general manager for entertainment, Mario Pacini, has gone onto the company’s blog pages to announce that the launch of Walmart Ebooks by Rakuten Kobo. The program has its landing page in place, with a “US$10 off your first ebook or audiobook” offer and a 30-day trial on a $9.99-per-month audiobook subscription—perhaps of greatest eventual significance in these audio boom-times.

Once the customer clicks into the Walmart page for a category of interest—ebooks or audiobooks—she or he is taken to a Rakuten Kobo page. Choose hardcover or paperbacks, and you remain on Walmart’s pages. Michael Cader at Publishers Lunch is reporting that it appears a consumer will need a Walmart account, rather than using a Kobo account.

The moment is significant on several levels.

Kobo’s Move South to the US

To stay with audiobooks for a moment, the Kobo-Walmart audiobook offer undercuts by $5 the Amazon Audible subscription. Both subscriptions provide one audiobook monthly. Audible costs $14.95, and Walmart Ebooks by Rakuten Kobo costs $9.99.

Neither of these subscriptions has the pricing allure of the Storytel model, which is an all-you-can-hear offer. However, Sweden’s Storytel has not yet arrived in the States. When it does (the US market is listed as one of its intended targets on its landing page), we may see something extraordinary—Kobo and Amazon united in their competition with someone else.

Despite partnerships with independent bookstores through the American Booksellers Association, Kobo’s presence in the States has never moved past single digits in market share, although it has maintained the home-team advantage “up north” in Canada.

Kobo CEO Michael Tamblyn has described the company “strategy from day one” as “partnering with the world’s best retailers so that they can easily offer their customers the option of reading digitally.” By partnering with Walmart, one of America’s most powerful retailers, Kobo may have finally found a way into the US.

A Long Route to the US Market

The Walmart partnership should be able to offer Kobo a wider Stateside footprint, especially with the advantage of audiobook subscription pricing.

However, expect no one in Seattle to break out in a sweat here. Amazon’s Kindle ecosystem is profoundly dominant in the American marketplace. For many US consumers, Amazon is the unquestioned go-to source for everything from tonight’s movie to Saturday’s lawnmower and the kitchen pantry’s automatically restocking staples.

But Walmart, of course, has a powerful place of privilege in the US market, as well, particularly physical retail. While Kobo’s international approach has given it what it reports to be customers in some 190 countries, one thing it has lacked was brand recognition in the North American marketplace. Despite its acquisitions of South Africa’s Exclusive Books and Vancouver’s Shelfie technology and retail and operating partnerships with Europe’s Tolino, Spain’s Fnac, the Netherlands’ Bol.com, and more, the name Kobo—a scrambling of the word book—has remained a peripheral mystery to many US shoppers.

If anything can blow past that “Kobo who?” name-recognition problem, a branding liaison with Walmart is it.

Some might say this is stooping to conquer, but if the money comes in, Tokyo and Toronto may not be dismayed that American consumers are saying, “Oh, I got that ebook from Walmart” or “Shh, I’m listening to my Walmart book.”

At Inc, Justin Bariso, in covering on Monday (August 20) Walmart’s strong earnings report, points out that while the chain’s huge fleet of brick-and-mortar stores grew at 4.5 percent, its e-commerce business, where Kobo stands, grew at a rate of 40 percent. This is part of CEO Doug McMillon’s plan to better compete with Amazon. The Rakuten Kobo element now can be seen standing beside McMillon’s steps toward more up-market branding in areas like fashion, in which Tommy Hilfiger, Calvin Klein, Donna Karen and other labels are coming in with Lord and Taylor.

Other coverage from the business press of Walmart this week are focused on the company’s filing for patents in VR-headset shopping. As Hamza Shaban reports at The Washington Post, “Strap on a virtual reality headset and start shopping as if you were in a Walmart. That’s a possibility conjured by two patent applications the company filed.”

In his introductory commentary, Walmart’s Pacini is slowed down by no book industry musings.

He points to four key advantages of the Kobo partnership, which we’ll quote for you here:

Walmart Ebooks is accessible, Pacini writes, through a co-branded app rolled out for iOS and Android, as well as on Kobo’s e-readers.

More from Publishing Perspectives on Rakuten Kobo is here.