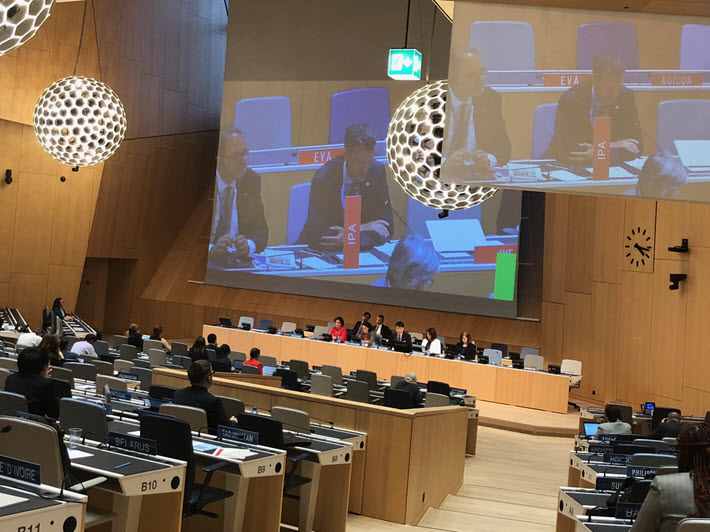 In stating its support for two years of discussion, the International Publishers Association at WIPO’s semiannual committee meetings signaled its stance on international copyright exceptions in education. 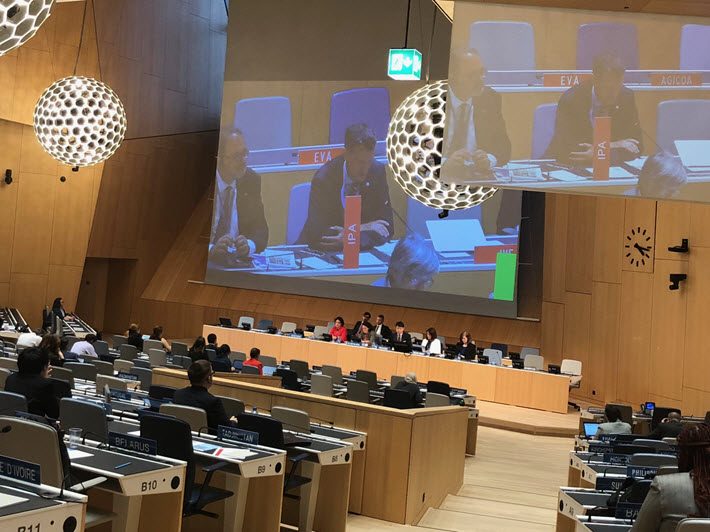 International Publishers Association president Michiel Kolman (on screen, center) speaks at WIPO’s first of two 2018 meetings of the Standing Committee on Copyright and Related Rights in Geneva. To the left of Kolman is the association secretary general, José Borghino. Image: IPA

Opposing Exceptions at the International Level

Each year, the World Intellectual Property Organization (WIPO) in Geneva hosts two weeks of meetings of the Standing Committee on Copyright and Related Rights, termed by participants, the SCCR.

True, the very mention of “the SCCR at WIPO about the DAP on Es and Ls and CSOs” quickly reminds you why you decided against that career in the diplomatic corps.

But when the International Publishers Association‘s (IPA) president Michiel Kolman spoke on Friday (July 13) with Publishing Perspectives about where things were after this year’s late-spring meetings that ran parallel to BookExpo in New York City, he went right to the reason that the association leads a book publishing delegation to each of these rounds of talks.

“We can actually really be part of the discussion there,” Kolman said, “as the voice of the publishers.” And that’s important, he said, because in an era in which we see efforts at undermining copyright protection (as in Canada’s Copyright Modernization Act), publishers need to be vigilant, and to insist that no such efforts toward copyright exceptions in education become a reality on the international stage.

“From our perspective,” he said, “it’s about the health of the copyright framework around the world.” WIPO and its SCCR form “a unique forum, the only place where copyright is discussed at this global level.

“And one might think that these meetings happening in Geneva will never have any impact locally,” he said, “but if we were ever to see a treaty” develop in educational-sector exceptions in copyright, “it will affect publishers on the ground, whether they’re in Bulgaria or Florida or Lima.”

Despite the fact that the pace of these talks over the years is–as in so much diplomatic policy work—what Kolman describes as “glacial,” the potential for impact on publishers in many parts of the world as a result of WIPO’s SCCR sessions is very real.

This is why, in the 36th round of the Standing Committee on Copyright and Related Rights in May and June, Kolman made an intervention on behalf of the world’s publishing community, saying, flatly, “The IPA opposes the establishment of new mandatory copyright limitations and exceptions at the international level. Our support for the Draft Action Plans is inextricably linked to that position.”

That’s a bright line being laid down, then, by publishers, a statement of the conditions under which they’ll cooperate and a line not to be crossed in what are called “draft action plans” or DAPs in the lexicon of these talks, which will guide discussion on copyright exceptions and limitations (“Es and Ls”) in this sequence for two years.

More of Kolman’s formal comments to the meetings: “The Draft Action Plans set out a coherent plan for WIPO’s further work in the important field of limitations and exceptions. The proposed work should be about providing support for local efforts to achieve balanced copyright regimes and practical solutions–rather than developing new international norms. The work includes the commissioning of studies, organizing regional workshops and conferences.”

The bottom line: Don’t try to develop international regulations in copyright exceptions. Leave them to each nation.

And in commentary contributed to the IPA by William Bowes, general counsel for the UK’s Publishers Association, the issue is put this way: “Those now seeking to exclude education from copyright need to answer the following question. When the world has finished reading for free all of the books and journals that exist today, who will pay for the production, curation and dissemination of the books and journals of tomorrow?”

Indeed, it appears now that there’s a bigger effort to stimulate movement toward an international copyright exception treaty than might be commonly understood. Bowes begins his opinion piece, “At last week’s Standing Committee on Copyright and Related Rights (SCCR) … many delegates asked for educational materials to be made copyright free.”

And partly in reflection of the broad base of these discussions, the IPA’s own delegation to the SCCR was sizable, including, in addition to Kolman and Bowes: 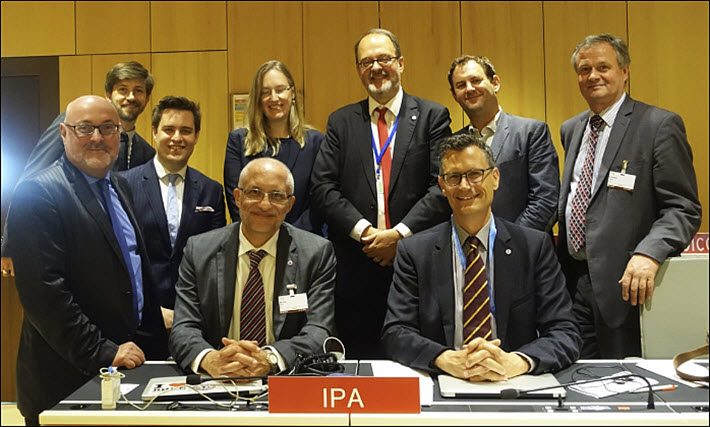 The International Publishers Association delegation to WIPO’s SCCR in May and June 2018. Image: IPA

‘The Health of the Copyright Framework’

Kolman told Publishing Perspectives that, on average, a member nation of WIPO will have some eight copyright exceptions relating to educational use of content and that this proves to be adequate in most cases because each member-state’s market is presumed to know and respond best to its situation on the ground. Needless to say, anomalies can occur as in the case of Canada—where the industry is now awaiting the results of a parliamentary review–the IPA’s position is that in most cases, a blanket international policy would be counter-productive.

“The IPA opposes the establishment of new mandatory copyright limitations and exceptions at the international level. Our support for the Draft Action Plans is inextricably linked to that position.”Michiel Kolman, IPA, WIPO SCCR 36

“Contractual solutions are the best approach,” Kolman said in his address at the SCCR, “to not only ensuring wider access to copyright works, but also driving the development of local publishing and other creative industries. Exceptions must be clearly enunciated to promote legal certainty, which is necessary to the development of such industries.”

There are specific issues, Kolman points out, in which a treaty-level exception can have its proper place. As an example, he refers to the Marrakesh Treaty, with which Publishing Perspectives readers are very familiar, in which a copyright exception is created at the international treaty level to support, as its title puts it, “access to published works for persons who Are blind, visually impaired, or otherwise print disabled.”

The United States Senate, as we reported earlier this month, has passed that treaty and its implementing legislation, leaving it ready for House of Representatives approval.

“This is a treaty that publishers are very happy about,” Kolman told Publishing Perspectives on Friday. “It’s important that we should support the visually impaired in the publishing industry.”

Kolman is now a member of the board of WIPO’s Accessible Books Consortium, which has as its goal increasing the number of books available worldwide in accessible formats including braille, audio, e-text and large print.

But while the Marrakesh Treaty’s goals are broadly supported by the worldwide community of publishing, Kolman is pointing out that so, too, can damaging and misguided diplomatic initiatives work their way through the system toward treaty efforts.

“So it’s very important to keep an eye on what happens at WIPO and the SCCR.”

The SCCR sequence is not all about issues that directly affect the publishing industry. It also includes a proposed broadcasting treaty, for example–said to have been in discussion for 20 years–and a debate around “limitations for libraries, archives, and museums,” or LAMS.

The copyright exceptions issue around education are one of three major areas of examination taken up at SCCR, then, and the one most relevant to publishers. Kolman is easily attuned to what the issue could mean to educational publishers, of course, because he’s a senior vice president with Elsevier.

And the risk, he says, is becoming complacent.

Because this kind of diplomatic inquiry and development work can seem, he warns, “to be a glacier with very miniscule changes” in documentation and debate, “It’s tempting to say, ‘Oh, let’s skip this for 10 years and then see what happens.

“But in 10 years, you’ll come back,” Michiel Kolman says, “and don’t be surprised to find the glacier gone, the sea level risen, and as one of the unintended consequences, our coastal cities under threat.” 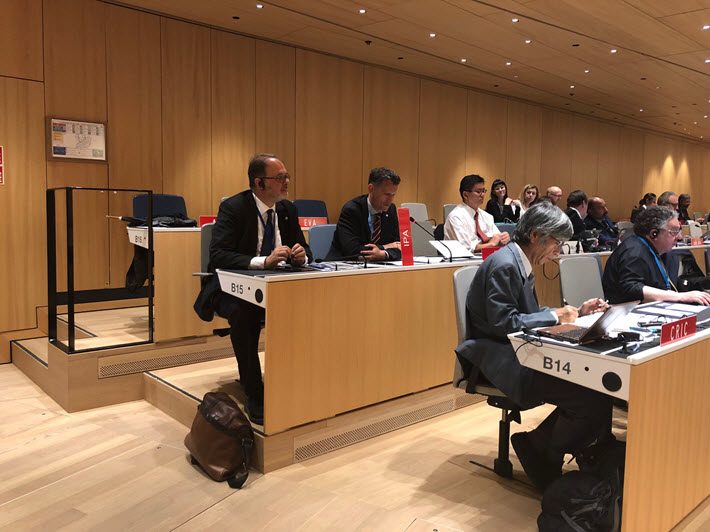 At WIPO’s first of two 2018 meetings of the Standing Committee on Copyright and Related Rights in Geneva. Image: IPA

If you’d like to know more about the SCCR process from the spring meetings, there are blog posts from the meetings made by IPA’s James Taylor here. And more from Publishing Perspectives on the IPA and its work is here.