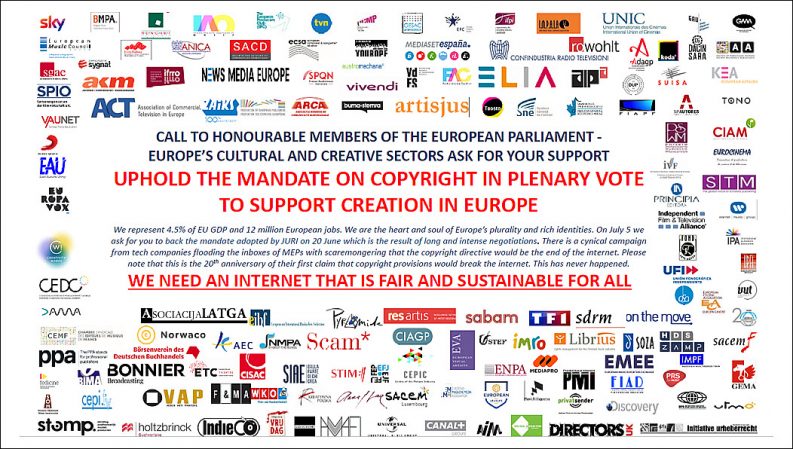 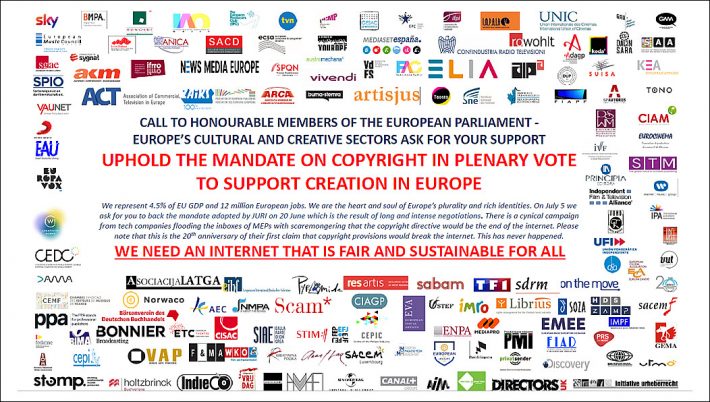 This is one of the announcements that organizations lobbying for passage of the copyright directive were using online ahead of the vote. Image: #vote4JURIreport

As Publishing Perspectives reported, the rejection on July 5 by the European Parliament of the copyright directive adopted in June caught many by surprise and prompted concern in many quarters. In the run-up to the vote, the International Publishers Association had published a look-ahead that noted the Federation of European Publishers’ “by no means enthusiastic” backing for the copyright directive.

The 318-to-278 vote-down of the bill—and subsequent amendment work with another vote coming in September—show a deeply divided Parliament on some highly fundamental issues. In simplistic terms, the copyright directive, part of the EU’s Digital Single Market development, is meant to protect copyright holders’ rights in the face of large tech companies’ use of online content in aggregations and links.

But there are complex and layered aspects to the legislation and agendas in question, and, as a statement from the federation noted, the directive at this point doesn’t have immediate and specific impact on book publishing—it relates more closely to news content and music—but is recognized by all the creative industries as having potential repercussions across the field.

We’re glad today to have the input of attorney Dr. Jessica Sänger, legal counsel and director of European and international affairs for the Börsenverein des Deutschen Buchhandels, Germany’s Publishers and Booksellers Association. Sänger has closely followed the development of the legislation and what it means for Germany’s and the international publishing industry.

We start our exchange by asking Sänger to help explain the legislation. And one note: the term “trilogue,” in case you’re not familiar with it, refers to three-way negotiations between the European Commission, the Council of the European Union, and the European Parliament.

BREAKING: Mandate to proceed with Trilogue on the basis of JURI copyright report rejected in the EP!

Publishing Perspectives: Some outside of Europe, especially, have been surprised to hear of the rejection of the copyright directive by the European Parliament last week. Since it’s part of the Digital Single Market effort, can you help us understand how it fits into that context?

Jessica Sänger: The Directive on Copyright in the Digital Single Market addresses a number of areas which the European Commission felt required attention. It’s actually quite a mixed bag, containing a set of copyright exceptions; a proposal on how to deal with works which are out of commerce; a fix for the HP/Reprobel fallout; a press publisher right; and new rules affecting publishing contracts.

The provision that has attracted the greatest public attention is directed at getting large commercial platforms to conclude licenses with rights holders to cover the content their users’ upload to the services (for example, YouTube), thereby protecting users from liability and paying rights holders at least something for these uses.

Largely because of the massive campaign waged by the big Internet companies against this provision (Article 13), the vote of last week went against the “trilogue mandate.” This does not mean the directive as such was rejected. But it does mean that the plenary did not accept at least some of the compromises achieved in the Legal Affairs Committee (JURI).

As a result, the entire substance of the directive will be subject to a vote in plenary in September.

So important that MEPs support the Juri report today in plenary. If creators can’t afford to work there will be no content to watch…. https://t.co/DfYmtvS79D

PP: And then in terms of books and publishing, it seems that the main thrust of the directive has to more to do with music, video, news reporting, and so on—the use by aggregators of online content on some basis of fair use and so forth. Is it possible to understand the importance of the legislation to publishing?

JS: The areas of greatest importance for publishing are the proposed exceptions; the HP/Reprobel fix; and the proposals on books that are out of print.

The directive contains an exception for text and data mining (TDM); illustration for teaching; and preservation of, for example, library collections. Depending on their scope and safeguards (or lack thereof), these exceptions could have quite an impact.

The main reason that German publishers are waiting impatiently for the directive to be adopted, is the provision that will fix the far-reaching fallout from the HP/Reprobel ruling and give German lawmakers a sound basis on which to install a system which will once again permit publishers to receive a share of collective management organizations (CMO) revenues paid for uses under exceptions.

PP: At the Society of Authors, chief executive Nicola Solomon has mentioned Articles 14 and 16 in particular.

PP: Overall, it appears to be a good moment for the publishing sector to support the overall creative industries and stand alongside its sister disciplines, knowing that copyright is integral to all of them. It seems the Börsenverein has been highly proactive on the situation. Can you describe some of the actions the group has taken?

“The JURI report was a hard-fought compromise, which had required every side of the debate to give some ground, but that on balance, it was still reasonably fair.”Jessica Sänger

JS: A broad coalition came out in favor of the trilogue mandate ahead of last week’s vote. Indeed, we’ve been together with other creative sectors working throughout the process in order to keep the damage to copyright to a minimum. Given that different provisions have different degrees of importance for each sector, of course we also each have different top priorities.

I think the general feeling about the JURI report was that it was a hard-fought compromise, which had required every side of the debate to give some ground, but that on balance, it was still reasonably fair—although we still felt we would need some improvements in trilogue.

I think the massive disinformation campaign waged by GAFA [Google, Apple, Facebook, Amazon] shows what we’re up against, and we have to be united in order to at least try to bring facts back to the debate. We cannot rely on anything like the resources these companies are able to put into their campaigns, but we tried to be visible,  for example on Twitter, and in a collaborative effort, we came up with the #vote4JURIreport hashtag and the site with our statement and signatories.

We also actively supported the Europe-wide appeal which was signed by more than 130 creative sector organizations.

JS: The September event is actually part of a series of events where authors and their publishers talk about the creative process and how the—often symbiotic—relationship between authors and publishers works in practice. It’s a peek behind the scenes for members of parliament, and this format has worked quite well in the past.

When this was initially scheduled, we had no idea that it would coincide with this hugely important debate and vote on the Digital Single Market Directive on Copyright. We’re currently looking at how to make it work best in that context.

Many members of parliament who don’t follow the copyright files closely have focused exclusively on Article 13 so far. We’ll need to inform them about the many other issues and explain what’s at stake. This is no easy task given the complexity of copyright and the sheer number of areas the directive will affect. The event you mention will be one element in hopefully achieving this.

PP: Finally, how should we think about what lies ahead? How should we frame our concern about what a failed directive could mean to publishing? And if the September vote fails, is there an understanding yet of where that would leave the directive? Fully lost, or are there paths to recourse?

“If the text that’s finally voted by the plenary in September diverges to a great extent from what the council adopted as its position, trilogue could still hit the wall, delaying adoption still further.”Jessica Sänger

JS: This is not a simple scenario where we have a “good” directive that we want to salvage, and that’s generally opposed by enemies of copyright.

It’s more about the substance of each article of the directive, which could range from helpful to catastrophic, depending on which amendments get voted in September.

This means that whether or not we’ll want the directive to survive trilogue depends on what it ends up looking like. The same goes for other actors and/or sectors.

What we really need is to keep the scope of the exceptions narrow (for example, the uses of illustration in teaching mustn’t undermine the market for school books or  novels that are often read for the purposes of study). We also need a workable version of Article 12 which allows member states to get back onto firm ground where they run systems based on collective management organizations jointly run by authors and publishers, allowing publishers to receive a share of CMO revenues.

On the other hand, we could live perfectly well without, for instance, a text and data mining exception, since licenses are already available for researchers.

One thing to bear in mind is that if the text that’s finally voted by the plenary in September diverges to a great extent from what the council adopted as its position, trilogue could still hit the wall, delaying adoption still further—potentially even beyond the end of the term of this parliament, which could in effect be the end of the directive.

More from Publishing Perspective on copyright issues is here.