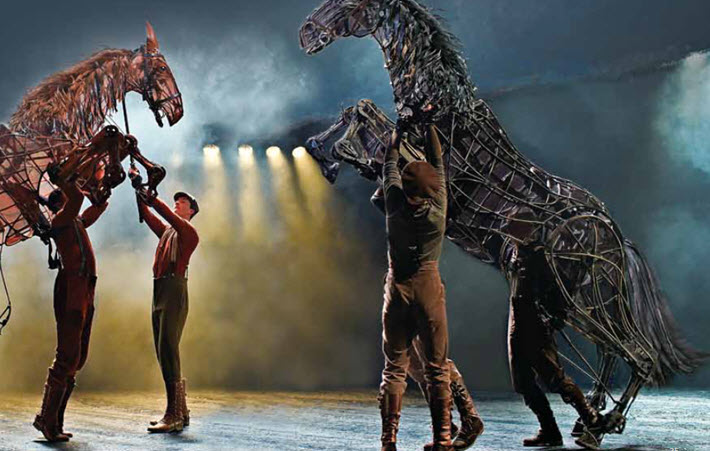 Taking on the critics who say that TV and film are eroding publishing, the Publishers Association’s report asserts that the best—and top-earning—productions ‘begin with a book.’

An image from the stage production of ‘War Horse‘, currently on tour in the UK, is used in a case study in the Publishers Association’s report, with director Tom Morris’ comment that ‘It’s the heart of Michael Morpurgo’s story that people connect to.’ Image: Brinkhoff/Mogenburg from ‘Publishing’s Contribution to the Wider Creative Industries’

‘Links Between the UK Publishing and Wider Creative Economy’

In a 21-page report just released today (July 10), the UK’s Publishers Association is making the case that the market’s publishing industry “significantly increases the commercial and cultural value of film, television, and theatre productions, acting as the foundation of the UK’s £92 billion (US$122 billion) creative industries sector.” 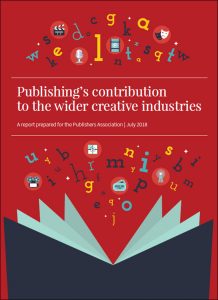 “Publishing’s Contribution to the Wider Creative Industries” (PDF) is the title of the research, performed by Frontier Economics. It’s the latest move the publishers’ organization is making to position book publishing squarely as an essential element of one of the UK economy’s most vibrant business sectors. This is one of a series of reports, informative as well as promotional, from the association, others being on the economic contribution of UK publishing (PDF) and on publishing’s contribution to school education (PDF).

The study includes not only statistics and their interpretation but also several case studies, among them the 2017 Roger Micheli film treatment of Daphne du Maurier’s 1951 book, My Cousin Rachel; the six-episode television series from director Susanne Bier, The Night Manager, based on the John le Carré book from 1993; and Michael Morpurgo’s 1982 War Horse, which went to the stage in 2007 and was released as a Steven Spielberg film in 2011.

And this report arrives at a time when many observers are thinking about how visual storytelling media—fine television and film production in particular—are creating so much content and producing it at such high levels of quality that consumers may not be saying, “I have to read the book now” in every case, as “The End” rises on the screen. A part of the narrative from this new Publishers Association release is very much, “Oh yes, the book does still very much matter.”

As compared to original scripts and screenplays, the Publishers Association is announcing, book adaptations attract, on average:

In a statement prepared for today’s release, association chief Stephen Lotinga is quoted laying out with crystal clarity the intent of this interesting new research, and adding a an extra vote for strong copyright protections, as well.

“Storytelling,” Lotinga says, “is at the heart of the creative industries and often the best stories begin with a book.

“This research shows the hugely positive commercial impact British publishing is having on film, television, and theater as our incredible authors’ ideas are the source of so many successful productions. From the sprawling Harry Potter universe to the colorful stage adaptations of Roald Dahl’s timeless stories, British books are world-leading, and hold exceptional cultural relevance on a global scale.

“All of this success is only possible due to our gold-standard copyright system, and at a time of great change, we call upon the government to do everything it can to continue to support us.”

Of course, that government has in the past 36 hours or so experienced considerable shockwaves with the resignations of Theresa May cabinet members David Davis and Boris Johnson, as the UK trundles onward toward the many unknowns of Brexit. As Stephen Castle probably understates it in The New York Times, Johnson’s resignation “deepened a mood of crisis just eight months before the country is due to leave the bloc.” Less delicately put, William Booth and Karla Adam at The Washington Post wrote that May “struggled Monday to keep her government from imploding after the resignations.”

And as things move forward, the various creative industries leading advocacy organizations, like the Publishers Association, have been at pains to demonstrate the importance of their work in a lucrative entertainment sector not to be overlooked by beleaguered economic and political planners. 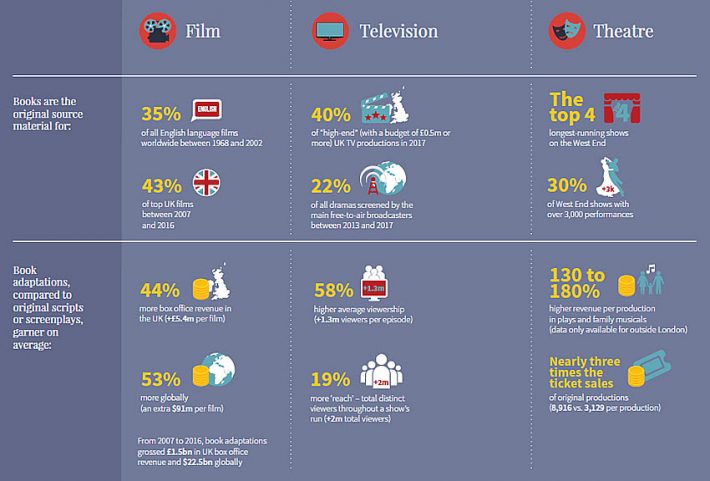 In parsing some of the new report’s top-line results for the media, the Publishers Association divides its reports’ information into film, television, and stage theatricals. 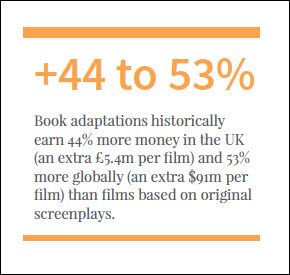 “On average, these adaptations earned 44 percent more revenue in the UK than films based on original screenplays, equating to an extra £5.4 million (US$7.2 million) per film. This rises to 53 percent globally, equating to US$91 million extra per film. [The material does specify dollars in that last figure of 91 million.]

“The report,” the association’s material says, “highlighted that adapted films not only perform better financially, but also perform better in terms of critical acclaim and awards. On a five-star rating scale, adapted source material adds half a star, with the effects being felt predominantly for bestselling novels, literary classics, and adaptations of nonfiction books.” 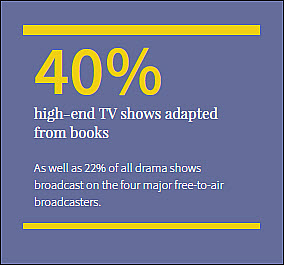 “Books are also a popular source for high-budget TV series. Out of the 35 ‘high-end’ series produced in the UK during the period January to September 2017, 40 percent were based on books. Only 26 percent were based on original material, with the rest either a true story or adapted from another TV or film production.

“Of the top 100 television dramas broadcast between 2013 and 2017 on the UK’s free-to-air channels, those with literary origins attracted on average an additional 1.3 million viewers per episode, equating to 58-percent higher viewership than dramas based on original material.” 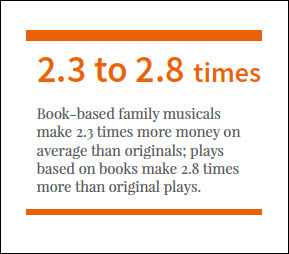 “Not only do books translate well to the screen,” the Publishers Association writes, “but also to the stage. During 2016, 27 theater productions adapted from books generated £25.8 million (US$37.8 million) in revenue.

“Shows based on books also tend to run for a longer period of time, with the top four longest-running productions in London’s West End based on literary sources.”

‘A Steady Stream of Works of Fiction and Nonfiction’

In some closing remarks at the end of the text of the study, we read, “In producing a steady stream of works of fiction and non-fiction, publishers act as a repository for stories to be discovered by producers, agents and scouts looking for ideas. … The direct involvement of the author can sometimes improve the quality of adaptations, due to their deep understanding of the story and characters.”

That reference to authors–along with Lotinga’s mention of “our incredible authors”—may be heartening to writers who are watching the dialogue around author revenues between the Publishers Association, the Society of Authors, and the Authors’ Licensing and Collecting Society, which we’ve reported on here.

Writers may be encouraged to see that the study lists “investing in authors early and helping develop their careers” as one of the ways publishing contributes to all three channels of production in discovery.