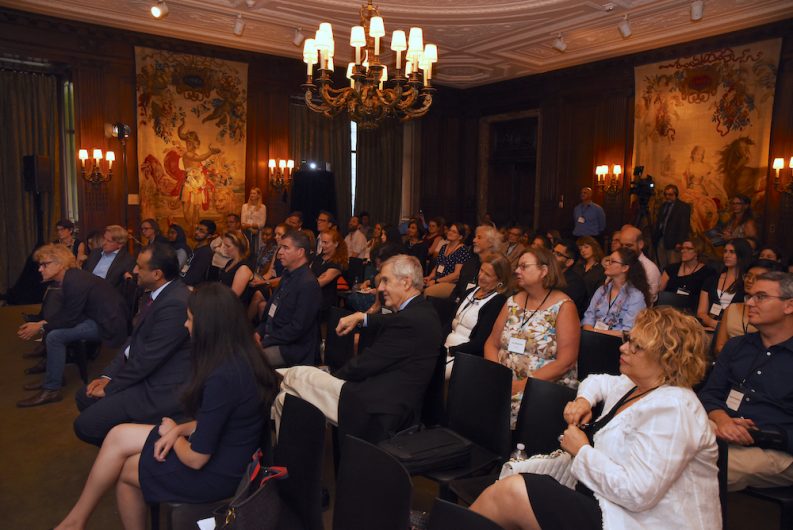 Is there enough discussion in American publishing about Arabic literature in translation? At a seminar in New York, the publishing audience was eager to know more. 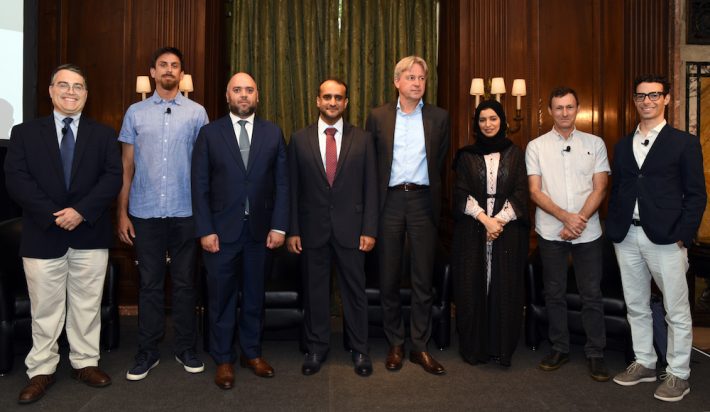 ‘To Understand Other Cultures’

One of the biggest takeaways from Wednesday’s (July 11) Seminar on Arabic Literature in Translation was that the publishers, translators, agents and others in the audience are eager for more information on the subject.

The seminar, held at New York Public Library, was co-organized by Publishing Perspectives, the Frankfurt Book Fair New York, and the Sheikh Zayed Book Award. Three introductory speakers set the stage for a panel discussion on modern Arabic authors and the issues related to translating and publishing their work into English.

The discussion ran long as questions from the audience were put to the panelists. Moderator Chip Rossetti, editorial director for the Library of Arabic Literature, began the discussion by saying, “it is rare that Arabic literature gets this kind of venue”—too rare and much needed, it seems, judging by number of hands that went up during the question and answer session. 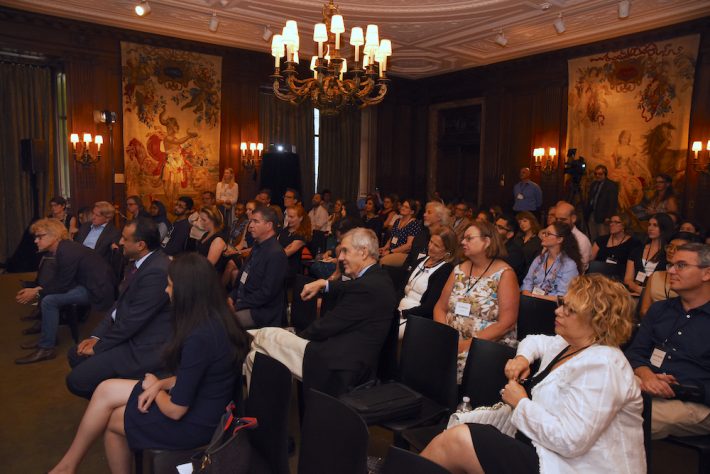 In the Trustee’s Room at the New York Public Library. Image: John Harris

The seminar opened with comments by the United Arab Emirates’ consul general in New York, His Excellency Majid Al-Suwaidi, affirming the UAE’s commitment to literary initiatives and “cultural openness and exchange.”

The UAE is home to the Sheikh Zayed Book Award, which launched a new translation funding initiative for Arabic books. The funding is open to all children’s, YA, and literary titles that have won the award since its debut in 2007. Each title is eligible for up to US$10,000 in translation funding, with additional grants available to cover marketing and production.

“It’s an initiative we hope will contribute to increase the number of Arabic books that are translated, published, and distributed outside the Arab world.” said Abdullah Majed Al Ali, executive director of the National Library Sector for the Abu Dhabi Department of Tourism and Culture.

Following up on Al Ali’s comments, Frankfurter Buchmesse director Juergen Boos said to the audience, “Translations are the most important thing to understand other cultures,” and he said that Frankfurt is committed to supporting the people behind these translations.

Part of the Frankfurt Book Fair’s role in the global book industry—and at seminars like this one—is to work at “enabling, helping, setting up publishing infrastructure all over the world,” said Boos.

As the panel discussion got underway, several themes emerged regarding the discovery and translation of Arabic literature outside the Arab world. 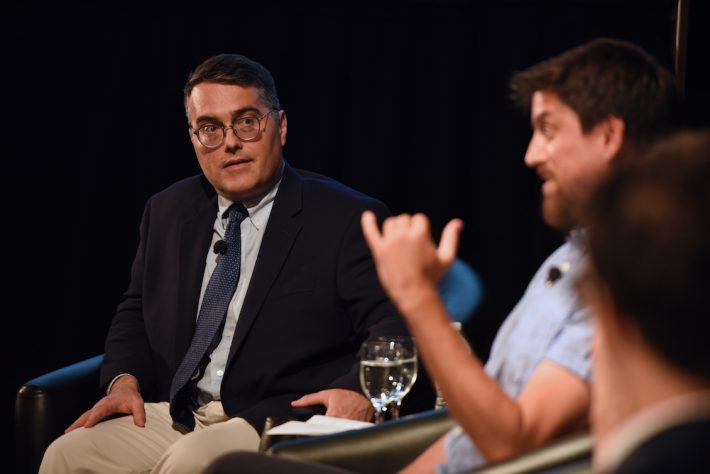 ‘A Kind of Canon’

First, there is a large body of Arabic work that’s still undiscovered in translation, and this isn’t necessarily due to a lack of interest. Max Weiss, a translator and associate professor of history and Near Eastern studies at Princeton University, said that interest in Arabic literature tends to follow current events like the attacks of September 11.

This cyclical interest sometimes means that published translations tend to reflect those current events, but not necessarily the broader scope of Arabic writing.

Weiss brought up an example well known in Arabic literary circles to illustrate his point. In 1980, professor and literary critic Edward Said pitched a novel by Egyptian writer Naguib Mahfouz (who would go on to win the Nobel Prize for literature) to a New York publisher. The publisher responded, according to Said, by saying that Arabic was a “controversial language.”

Weiss said that “Arabic literature became visible in English in ways that reproduced that very premise.”

Without “a kind of canon” of modern Arabic literature in translation, Weiss said, we don’t have a reference point for this body of work beyond this seemingly enduring perception of Arabic as a “controversial language.”

The second theme that the discussion brought to light was the degree to which the state of publishing in various Arab countries affects the authors living and writing there. 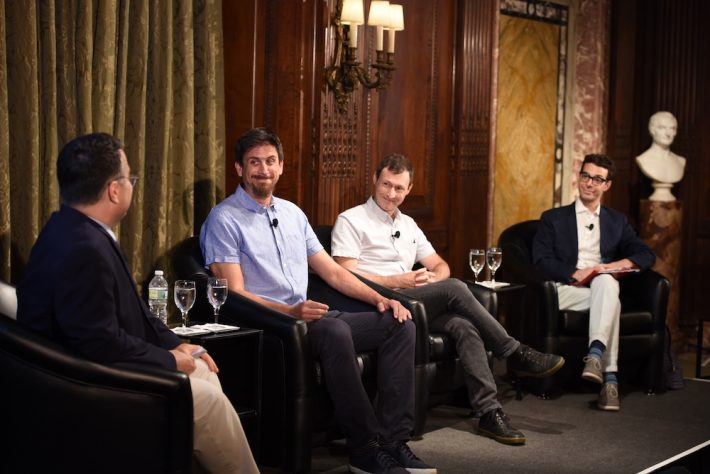 ‘To Go Outside the Country’

From his seat in the audience, Jonathan Galassi, president and publisher of Farrar, Straus and Giroux, asked the panelists about how books are distributed in the Arab world and about issues of censorship.

Alex Elinson, translator and associate professor of Arabic Language and Literature at Hunter College, said that the state of publishing varies from country to country. Based on many conversations with Moroccan writers, Elinson said, those writers feel they have to “go outside the country” in order to see success.

Rossetti agreed, relating his experiences while working as an editor at the American University of Cairo Press. As an author, he said, it’s common that “you write in one country and take [the book] to your publisher in another country.” This strategy addresses both censorship and distribution challenges in the region.

Censorship “varies from country to country,” said Weiss. Even before the revolution in Syria, he said, “writers would often self-publish or publish abroad,” primarily in Beirut, to avoid the censors.

Elinson added that this practice of going outside one’s home country or even outside the Arab world to publish “affects the language the writers use” because they then are writing for a different audience.

Despite these challenges, the third overarching theme of the discussion was one of optimism.

He recently published Frankenstein in Baghdad by Iraqi writer Ahmed Saadawi. The book has gone into multiple printings, was shortlisted for the Man Booker International Prize, and won this year’s International Prize for Arabic Fiction.

And there are more positive signs from Morocco, said Elinson. Fifteen years ago, he said, there was almost no genre or children’s publishing. Yet in the last five years, two new children’s publishers have opened up, publishing both translated titles and original Arabic works.

Weiss noted a growing market for YA literature and science-fiction novels in the Arab world. And he said he’s optimistic about a recent interest in US publishing in Arab literature.

The discussion ended on a high note as Siciliano said that it was “forums like this one,” personal connections, and conversations between people that often lead editors to discover and fall in love with Arabic books. 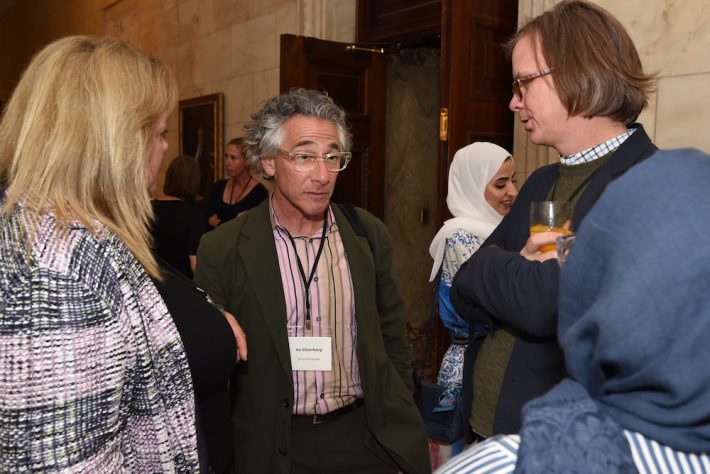 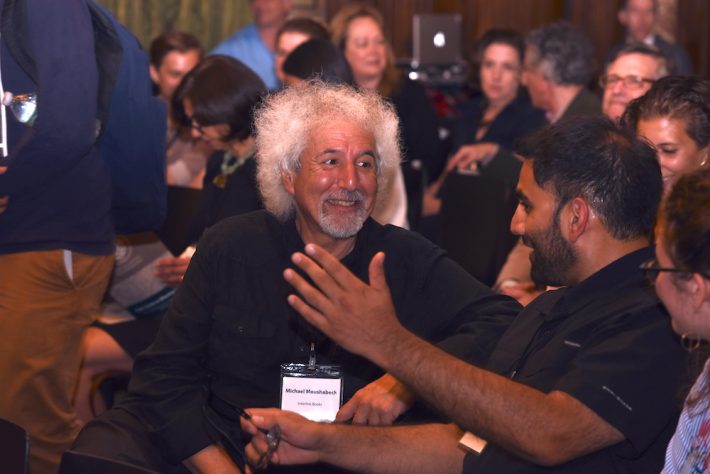 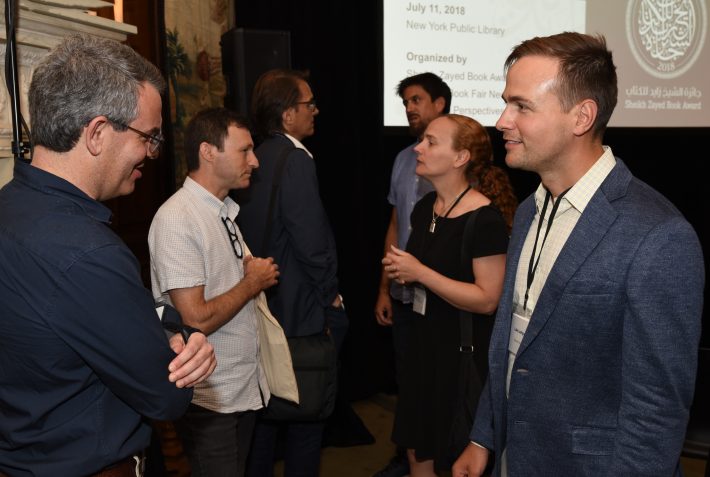 More from Publishing Perspectives on the Sheikh Zayed Book Award is here.