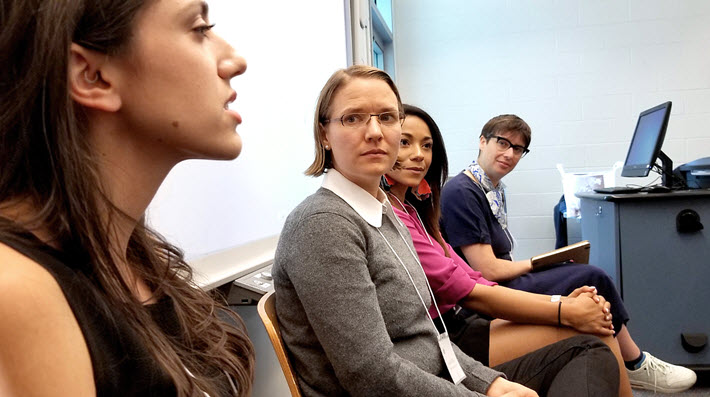 Given a chance to speak to an audience of consumers, translation specialists brought together by the National Book Foundation, spoke about publishing, selling and marketing literature in translation. 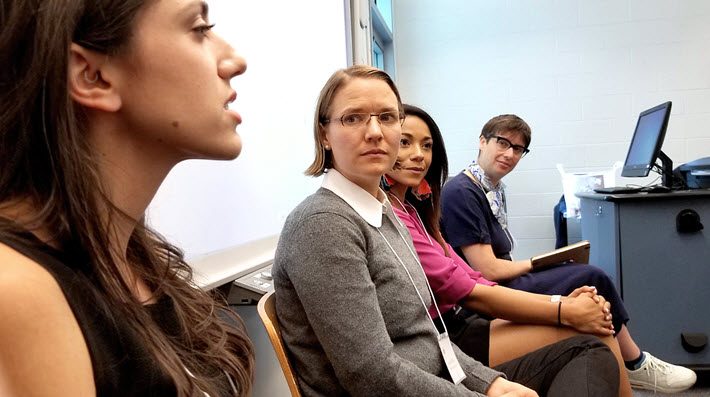 ‘We’re All in Our Echo Chambers’

In a session of the Why Reading Matters conference produced last month by the National Book Foundation at St. Francis College in New York City, several key professionals working with translated literature had a chance to speak not just to peers but also to the public about translation’s place in publishing today.

The audience heard discussions on the value of translation, its challenges, and how differently translation is perceived in various parts of the world.

A part of the context for the session: this is the first year in which the foundation’s National Book Awards program will confer its new National Book Award for Translated Literature in November, an American counterpart to the Man Booker International Prize in London. Both awards recognize both authors and translators.

Publishing Perspectives was invited to participate on the panel, “Reading Without Boundaries, Reading the World,” which was organized and moderated by Gabriella Page-Fort–with whom Publishing Perspectives readers are familiar as the editorial director at Amazon Publishing’s AmazonCrossing translation imprint and winner of last year’s PW Star Watch ‘Superstar’ trip to the Frankfurter Buchmesse.

Speaking along with Page-Fort were:

In the session’s wide-ranging discussion, which included extensive give-and-take with the audience, several themes surfaced relative to how translation is encountered and viewed, particularly in the US market.

Gabriella Page-Fort: ‘Being Conscious of Constructs’ 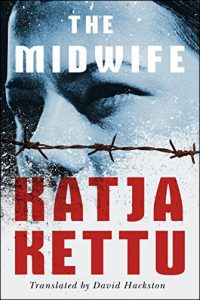 One of the points Page-Fort picked up on is that when we talk of “crossing boundaries” with translation, some of that can be seen occurring in the interface between author and translator. As an example Publishing Perspectives proposed for consideration, the Finnish author Katja Kettu’s The Midwife (AmazonCrossing, 2016) is told from an intensely feminine viewpoint, often in intimate prose. What makes that even more interesting is the fact that the book’s translator is male, David Hackston. In some way, a special empathy is in play in Hackston’s arresting evocation of Kettu’s story.

“That translator is an actor,” Page-Fort revealed to the audience. “And I think that’s part of why he embodied the character so well,” the female lead in the book, a person who is at every moment deeply aware of her womanhood.

Page-Fort spoke of The Midwife as “a beautiful, traumatizing story about a woman during World War II who falls in love with an SS photographer. And she’s Finnish, and it involves some of the geo-political situation between Russia and Finland and the Allies and the Axis. She’s part of the resistance but also very provincial.

“The juxtaposition of the provincial female perspective with all these big, world events that are so male—and the man she’s in love with, the photographer, is so male and so is everything about what he’s doing, capturing pictures of bodies to prove the atrocities his own party is committing. These things are very, very rigid. But the language that’s used to describe it in the book is all very feminine, all very beautiful and delicate.

“And geographic. There’s a lot of landscape of the body, and a lot of what’s going on between the people in the book is actually about the land.

“One of the things I’ve gained in reading books from other parts of the world,” Page-Fort said, “is that the reasons people write books are different.

“In China, there are authors who write from the city, and those who write from the country. And there are huge schools of literary thought that are based on those two reasons to write. And you bring that to an American reader, and say, ‘Oh, you’re going to love this because he writes from the country’—and that doesn’t mean anything at all within our construct. But being conscious of these constructs that we’re living in—and having access to other people’s words to describe them—is a difference in reading experience. It’s the difference in saying, ‘Well what am I going to take from this story?’ and getting something completely different than I’m expecting.

“Writers all around the world are usually inspired by people who are writing from outside of their own discipline.”

What translation’s over-arching goal can be understood to be, Page-Fort said, referencing how she sees the work of AmazonCrossing, “is offering the most diverse reading experience possible,” and one way to understand the value of the new National Book Award for Translated Literature, she said, “is that it can elevate the work of international writers, putting them on the same stage with the writers who are living and working in New York and creating the ‘local’ culture of American literature.”

Christina Rickardsson: ‘Translation Is Not Strange’ 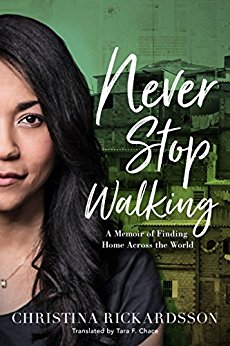 “For us,” she explained to the audience, “it’s not strange. When I arrived in Sweden, the first book I read was The Remains of the Day” by Kazuo Ishiguro.

“This is normal” for Swedish readers, in part, of course, because the population is relatively small and there may be fewer authors at work there than there might be in larger populations. Beyond that, however, many of the world’s cultures are more accustomed to reading work translated into their languages than are English-language markets.

Rickardsson’s point is one that would be echoed during the Frankfurter Buchmesse’s recent trip to Germany for UK and US editors who met with publishers in Munich, Frankfurt, and Berlin.

The German marketplace, like Sweden’s and those of many European nations, traditionally reads more translated work than is the case, on average, in the United States, the UK, or other English-language markets that have comparatively levels of output in the native language. 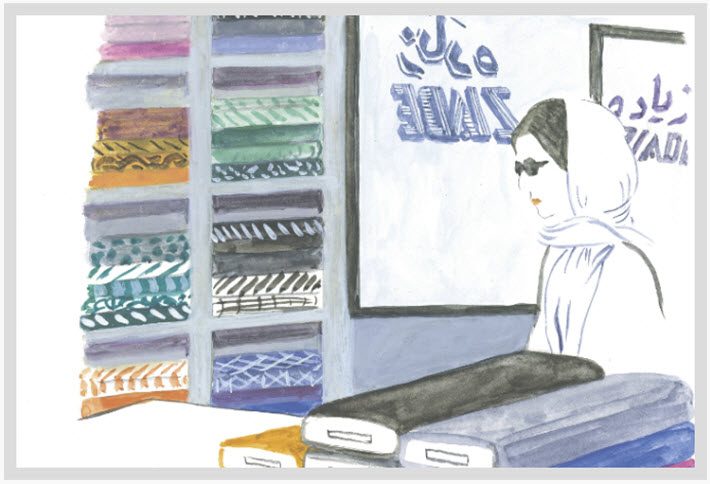 Lamia Ziadé, Detail from ‘Fairuz in My Grandfather’s Shop’ at Words Without Borders

“What we’re trying to do at Words Without Borders every month,” Phillips told the room, “is to provide a look at 10 to 15 writers from another language and bring them into English.

“Everybody in this business is thinking about how we can bring people in, what new thing can we do, besides simply publishing the literature.”Karen Phillips

“Some of them, maybe very few of them, will go on to be published in book-length form. But in the meantime, we believe that if you just read this story by them, it will add some value to your life. It can be a great experience. Read a couple of poems or see this graphic novel they wrote.”

This month, Words Without Borders is themed “Turning the Kaleidoscope: Writing From Lebanon,” and it includes poetry from Amarjit Chandan, Navtej Bharati, and Ajmer Rode, as well as fiction by Jabbour Douaihy, Lena Merhej, Hoda Barakat, and nonfiction by Sonnet Mondal, Lamia Ziadé, and Publishing Perspectives‘ Paris-based contributor Olivia Snaije with Mitchel Albert, an essay titled, “Through a Glass Brightly: Languages, Politics, and Contemporary Literature from Lebanon.”

“But,” Phillips said, “we face challenges in getting people to read it.” The monthly curated collection of translated work offered at Words Without Borders, is free to read, she pointed out. “And many of the writers have won all the major awards, they may have been translated into 20 other languages in addition to English.”

Some of the work at Words Without Borders is original in its publication there, not just a first outing in English. “They’re emerging, and we’re excited to welcome them.

“But we find when we’re publicizing our magazine on the Internet, that we’re all in our echo chambers. And the Internet is sort of designed to reinforce the walls of those echo chambers” by enabling deep selectivity in online interaction. “We see more of what we already know.

“And that’s actually hard to do,” even for a magazine that’s free and with 15 years of traction like Words Without Borders. “It’s hard to get visible.

“Everybody in this business is thinking about how we can bring people in, what new thing can we do, besides simply publishing the literature, which is what we really want to do. What other songs and dances can we do?”

Emma Ramadan: ‘Without Ramming It Down Their Throats’ 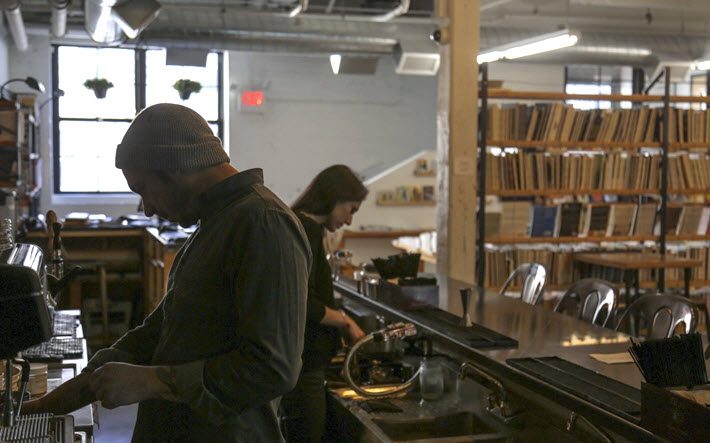 Phillips had created a natural segue in the discussion to translator and bookstore owner Ramadan, who prominently features translation in her store Riffraff, and is working quite cleverly to be sure her patrons are readily and regularly–and without fanfare–exposed to translation.

“And there are a lot of stores, including stores in New York,” she said, “that put translated literature in its own section, categorized by country. I’ve even seen bookstores with a small section that just says, ‘Translated Literature.’ And if someone isn’t already interested in translated literature, they’re going to avoid those sections—and it’s very easy to avoid those sections.

“They don’t necessarily even know it’s a translation when they’re buying it. I think that’s fine, as long as people are picking them up who might otherwise not pick them up. That’s the goal.

“Somebody came in the store recently, and all she wanted was a mystery and a love story. And I sold her these two incredibly obscure books in translation from small presses,” one translated from Spanish and the other from French.

“Shaking away those distinctions and just saying, ‘Hey, this is a good mystery and this is a good love story,’ and getting those books into people’s hands without ramming it down their throats that these are books in translation?—is okay.”