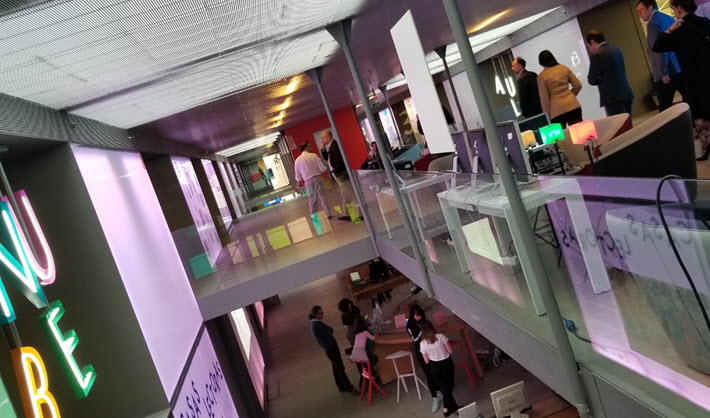 Built on the site of Madrid’s former industrial slaughterhouse complex, today’s Casa del Lector is filled with the joyous yelps of children meeting storytellers and the reading public encountering exhibitions on reading’s past and future. 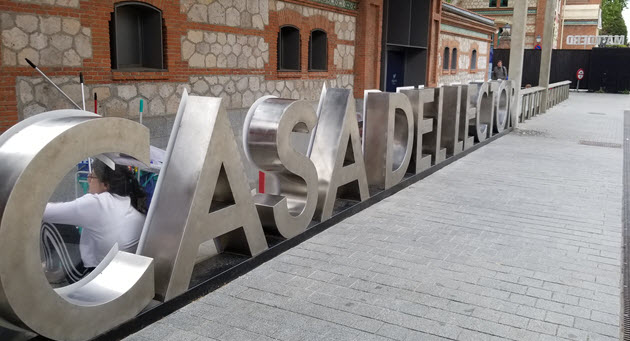 During last month’s Readmagine conference in Madrid, produced by José Manuel Anta of the International Publishing Distribution Association, participants had a chance to walk through the Casa del Lector (House of Reading) facility on a late afternoon when the facility was buzzing with family activities.

Commentary was provided by Luis González, director general with the Fundación Germán Sánchez Ruipérez, which has created Casa del Lector as a nonprofit place of experimentation and habit-building in reading. The physical complex, which adjoins the foundation’s home offices, was created as a cultural center in 1981 and designed by the architectural Ensemble Studio led by Antón Garcia-Abril in Madrid’s Matadero district—once a 48-building complex of livestock markets and slaughterhouses, which closed in 1996. 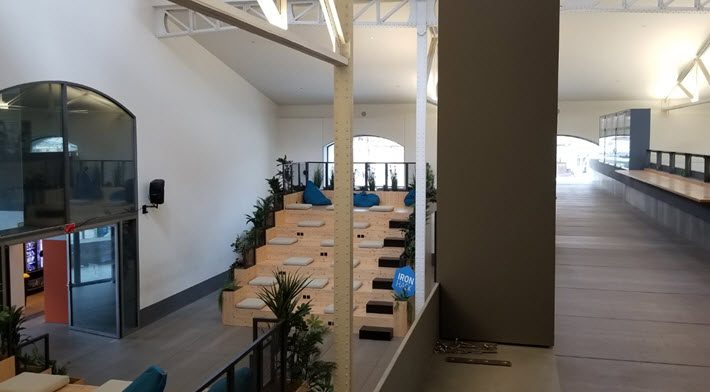 A performance space on ground floor, left, overlooked by an upstairs study and research area on the right at Madrid’s Casa del Lector. Image: Porter Anderson

The Casa del Lector, González told Publishing Perspectives and other visitors, is a hub of activity and community programs particularly for the parents of young children interested in exposing them as early as possible to reading with a goal of building the reading habit into young minds.

“We want to see,” González said, “if these kids are going to be different from others in eight years’ time” because they were exposed to reading at an early age.

He pointed to a large room in which a storytelling program for children was underway. A section of the space had been turned into what looked like a parking lot for strollers, parents lining up the buggies as they brought their children in for the event.

At another point, a kid went sailing down a stairway bannister as the group led by González moved upstairs to look at several exhibition spaces. Making the center fun for kids as well as instructive, clearly is an element of its success. 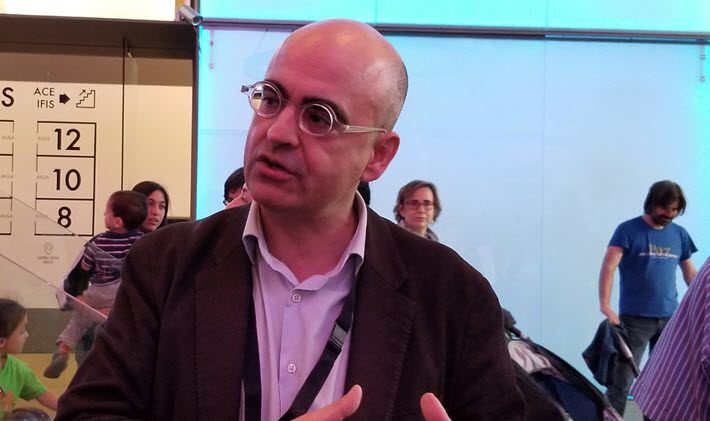 The building has many flexible spaces that can provide larger or more constrained areas for activities.

“We designed this place for a different purpose,” González said, as he showed the group a beautiful, airy elevated crossover with study desks. “We wanted to have researchers here. We have 40,000 books on readership from our research center. But there aren’t so many researchers” into reading,” he said they discovered.

“So we transformed this place into a self-use, self-service place for the neighborhood.” 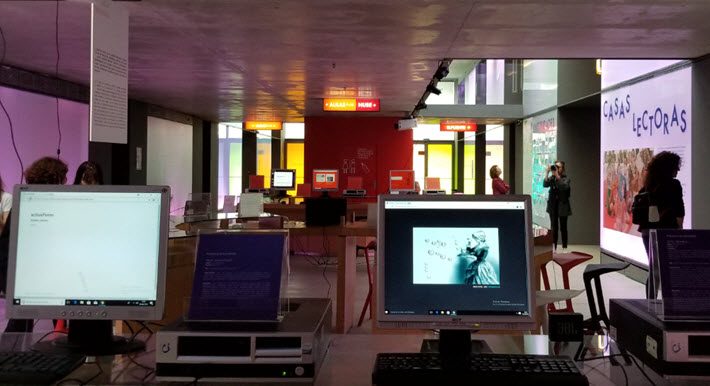 Exhibitions and Events in Reading

In addition to its emphasis on reading for children and families, there’s also a strong program in Web design and user experience going on at the Casa del Lector, with workshops and courses on readability and other elements of best practices in online presentation.

And there are exhibitions. Many parts of the colorful, rambling space are given to explorations of digital book formats, historical timelines about the development of literature, and steeply raked seating areas for programming and presentations, in warm, natural wood.

A number of the displays are interactive, meant to capture visitors’ imaginations and lead them through inquiries into reading and the place of words in our lives today.

Given special recognition by Spain’s ministry of culture, the installation includes a restaurant and bar area—in what once was a leather tannery—and outdoor spaces for performances in warm weather. And everything, from the emphasis on reading to the foundation’s barrel-ceiling conference center, is connected by long, cobble-stoned walkways and promenades, creating the idea of spaciousness and cohesion. 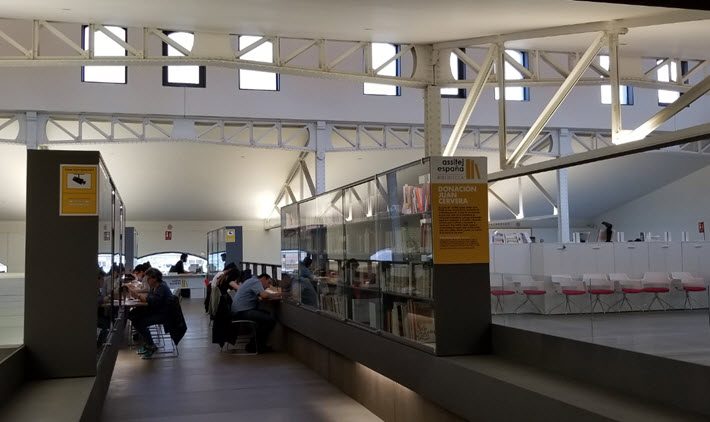 Originally created for the work of researchers in reading, the Casa del Lector has pivoted to become a hub of reading activity in Spain’s capital. Image: Porter Anderson

The total area of Madrid’s Casa del Lector comprises some 8,000 square meters. Technically known as the International Center for Research, Development, and Innovation in Reading, the center was opened in late 2012 and took some seven years to create on the foundation’s plan, as Luis González explained.

He pointed at one point to Gutenberg on a glowing timeline display, and somehow, the Casa del Lector seemed not so far from our most personal understandings of what reading means to us, on that afternoon, slightly overcast, in Madrid.

And in its programmatic materials, the center’s information reads: 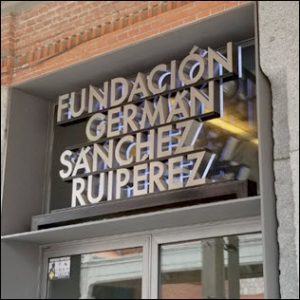 “In this space the meeting of the general public and the professional world is favored.

“The adult, the young person, and the child. The word, the image, the art.

“There is no cultural manifestation that, for your knowledge and enjoyment, does not require a full exercise of reading.”

Built in intriguing patterns of red brick and heavy stone, the complex is at once both welcoming and compelling: you can enjoy a stroll down its wide, main avenue, but not without being constantly aware that reading is expected of you—and of all of us.

Maybe the research mission wasn’t such a loss, after all. Some day, Madrid’s Casa del Lector may be the inspiration for deeply programmed and facilitated literary programming in “houses of reading” in other parts of the world.

Built into the deep-well space of a former tannery, a bar at the Casa del Lector in Madrid. Image: Porter Anderson

Publishing Perspectives has asked Luis González if there are ways in which interested publishers can be involved in Casa del Lector’s programming.

González tells us that publishers “can propose the inclusion of titles in the center’s program by making book presentations, which take place on a weekly basis.”

The foundation also has an agreement with the newspaper El País for visits from significant authors monthly, normally writers who are bestsellers, he says. In addition, the foundation produces its own initiatives and organizes many conferences, book clubs, and literary events, in alignment with foundation cultural strategies.

Casa del Lector isn’t a library, however, González says, and has no lending service nor a bookshop.

The program does buy books for experimental programs with families at times, he says, and it lends collections, renewing that content inventory each quarter. Each family gets a bag of books and an iPad with books and apps on it for a small part of the collection. In buying content for the family program, the foundation goes to independent bookstores in the Madrid area.