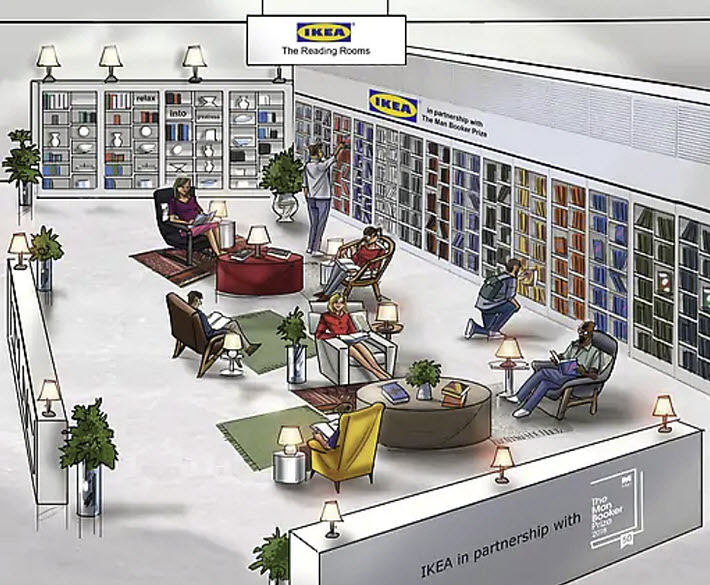 From July 31 to August 5, IKEA Wembley shoppers in London can book slots in its new Reading Room, featuring books on the 2018 Man Booker Prize for Fiction longlist. And they’ll get to take their book home free of charge. 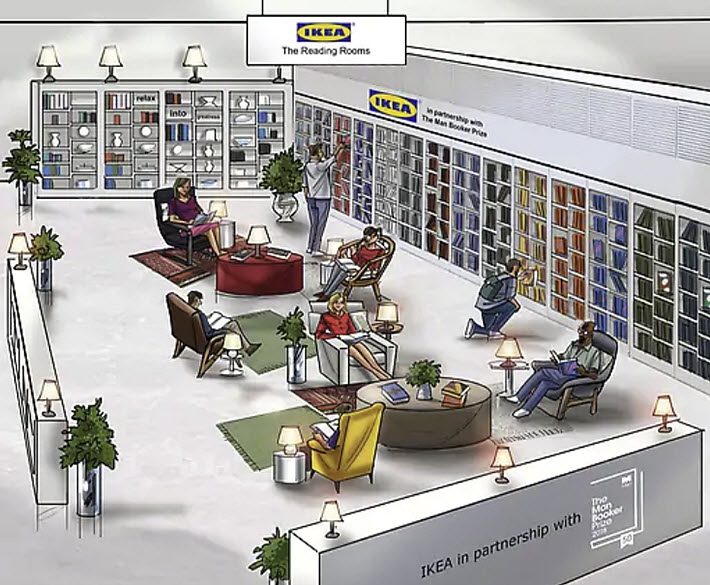 IKEA Wembley’s events pages include this artist’s conception of an IKEA Reading Room, created to promote the Man Booker Prize for Fiction 2018 longlist. Use of the rooms is free–as are copies of the longlist titles–but consumers are required to book a slot between July 31 and August 5. Image: IKEA Wembley

‘To Use Our Retail Space To Inspire’

The 2018 Man Booker Prize for Fiction longlist is to be announced Tuesday (July 24), and starting today (July 23), IKEA shoppers at London’s Wembley location on Drury Way in London can book time in specially created IKEA Reading Rooms filled with titles from the longlist.

In promotional copy at the IKEA Wembley site, we read, “With hour-long slots available from 10 a.m. to 6 p.m. on a daily basis,” for the six-day event, “visitors can curl up with a copy of a book from the newly-announced Man Booker 2018 longlist (which they can also take away with them) and unwind into a wonderful state of escapism in their own cozy, personal living room.

“So, if you want to switch off from the hustle and bustle of the outside world, then book your free slot today.”

Participating consumer-readers must be 18 or older. Only one slot is available per person, and a reservation for a specific slot is advised. Registration and information is here.

IKEA will supply each participating consumer with one book of her or his choice to take home free of charge.

Press messaging says that IKEA research has revealed that more than 10 percent of British citizens “have not read a book in the last year,” and that “nearly 13 million books are started but unfinished.”

Further, the company’s research indicates that “21.6 million (33 percent) of us only have time for a book when on a summer holiday.”

“More than half of workers (59 percent),” news copy says, say that they “feel they’re under pressure to respond to emails even when they’re home and have finished official work hours—which suggests that preventing the trials of workplace from entering our homes has never been more important. Sitting down and disappearing into a good book is a way to do just that.” The media materials don’t indicate whether visitors to the IKEA Reading Rooms will be required, however, to turn off or mute their devices.

Research from a 2009 study on stress from the University of Sussex is quoted, saying that “reading just six minutes a day can be enough to reduce stress levels by more than two-thirds.” And more of IKEA’s own research, we’re told, indicates that 64 percent of Brits [surveyed said they] believe TVs, laptops and smartphones often bring the stress and fast pace of the outside world into the place [in which] we should be experiencing pure relaxation.”

In a prepared statement, Luis Lopez, head of living rooms for IKEA UK and Ireland, is quoted, saying, “The Reading Rooms give us a chance to use our retail space to inspire people to think about the importance of relaxation at home. Reading at home is good for your health and the living room is the perfect, tranquil setting to do so, providing a peaceful haven from the outside world.”

And for the Man Booker Prize, its literary director, Gaby Wood, is quoted, saying, “If you associate reading with holidays then you probably associate it with indulgence. And–it’s true–reading fiction can be, at its best, a form of escapism. But that doesn’t make it a guilty pleasure. It’s more like a fast route to better health.

“Our homes are filled with devices that allow the digital world to encroach on our private lives. Reclaim your privacy, and your imagination: read a book.”

It might be interesting to see this promotion recreated for the Man Booker International Prize, as well as the prize for fiction, of course, in that Sweden (IKEA’s home) surely would be be represented among submissions for award. An IKEA Reading Room filled with translations is a heady concept.

And should there ever be a Man Booker prize for product placement in commercial copy, expect a strong showing from IKEA, which reminds the news media today, “Whether [you’re] curling up on our cozy Strandmon armchair, losing yourself in a story from our classic Billy bookcase, or propping your feet up after a long day on our comfy Poäng footstool, this space will enable people to relax and unwind.”