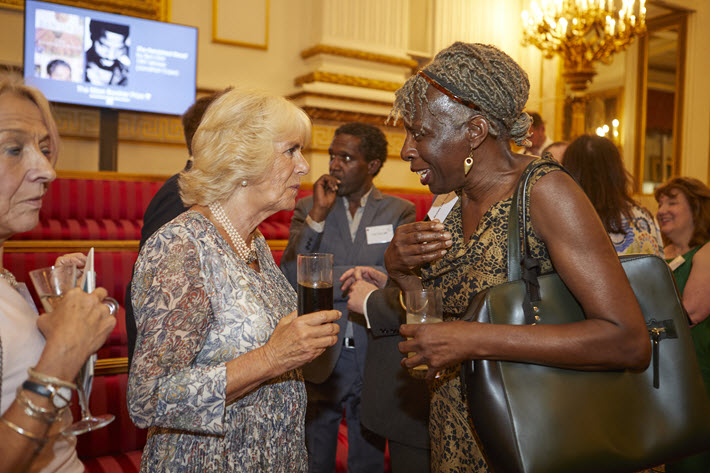 The Duchess of Cornwall has welcomed winners of the Man Booker Prize for Fiction along with jurors and others to a Buckingham Palace reception as the ‘Golden Man Booker’ weekend begins at Southbank. 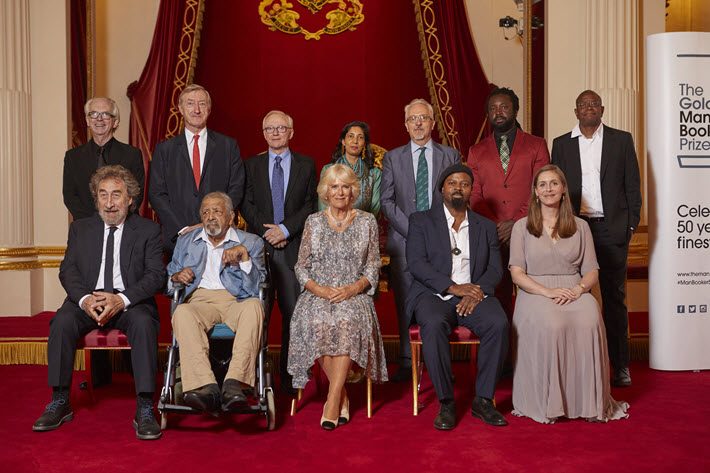 At the Buckingham Palace reception for the Golden Man Booker Prize 50th anniversary celebration. Past winners of the Man Booker Prize for Fiction and International Man Booker, from left on the front row, are Howard Jacobsen; VS Naipaul; Camilla, the Duchess of Cornwall; Ben Okri; and Ellie Catton. And on the back row from left, Peter Carey; Julian Barnes; David Grossman; Kiran Desai; Alan Hollinghurst; Marlon James; and Paul Beatty.

Tonight (July 5) HRH the Duchess of Cornwall has helped kick off the weekend celebration of the Man Booker Prize for Fiction’s 50th anniversary with a reception at Buckingham Palace. As Publishing Perspectives readers know, events set in multiple venues at the Southbank Centre this weekend will culminate in Sunday evening’s announcement of the “Golden Man Booker Prize” winner chosen by jurors and the public from five decades of the prize’s legacy.

The connection for Camilla, Duchess of Cornwall, is that she has been for five years the presenter of the Man Booker Prize for Fiction ot the winning authors, a stalwart friend of the award program.

And of special note was publisher Tom Maschler, who with Graham C. Greene was responsible for setting up the prize in 1968. 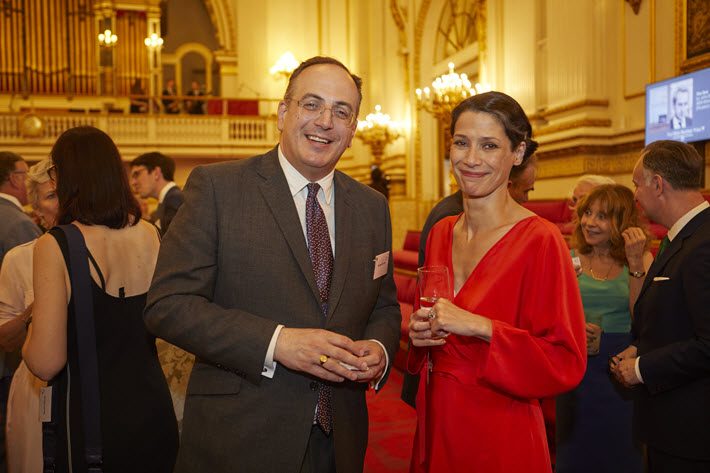 In speaking to the gathering, the chair of the Booker Prize Foundation, the Baroness Helena Kennedy, said, “We’ve been really lucky to gather so many important people from the history of this prize. “The 50th anniversary is a landmark year for the Man Booker Prize, celebrating the past, present and future.

“The extending of the Man Booker Prize for Fiction to include all novels written in English … great ideas don’t respect boundaries.”Luke Ellis

“Literature has the power to change lives, quite apart from the writers who the prize honors tonight. It has an enormous influence in prisons, libraries universities and schools, the work of the Booker Prize Foundation would not be possible without the very generous support of the Man Group.”

And speaking for the Man Group, CEO Luke Ellis said, “We’re extremely proud to have sponsored this prize over the past 16 years and, in that time, we’ve seen winners from a diverse mix of countries and backgrounds.”

It’s notable that Ellis was unafraid to raise the subject of the “evolved” eligibility regulations which have allowed for non-British or -Commonwealth authors to be winners of the Man Booker for the past two years. Clearly, Ellis seems convinced that the prize is on the right course, despite criticism, saying, “The extending of the prize to include all novels written in English and the establishment of the Man Booker International Prize are merely recognition of something we all know–that great ideas don’t respect boundaries, that real excellence wants to perform on the widest stage possible.”

Information about this weekend’s Man Booker 50 Festival events can be found at the Southbank Centre’s site. The programming features more than 60 speakers and a series of debates, readings, and masterclasses, and Sunday evening’s (June 8) revelation of the “Golden Booker” winner. 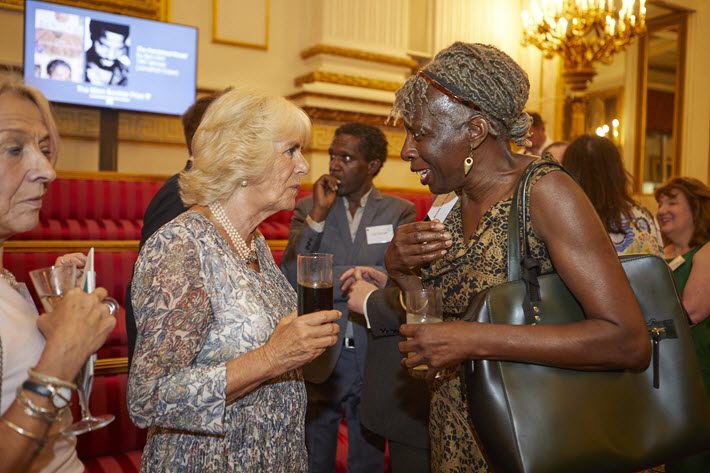 Social media content about the ‘Golden Man Booker’ 50th anniversary events will be hashtagged #ManBooker50. More from Publishing Perpsectives on the Man Booker Prize for Fiction is here.