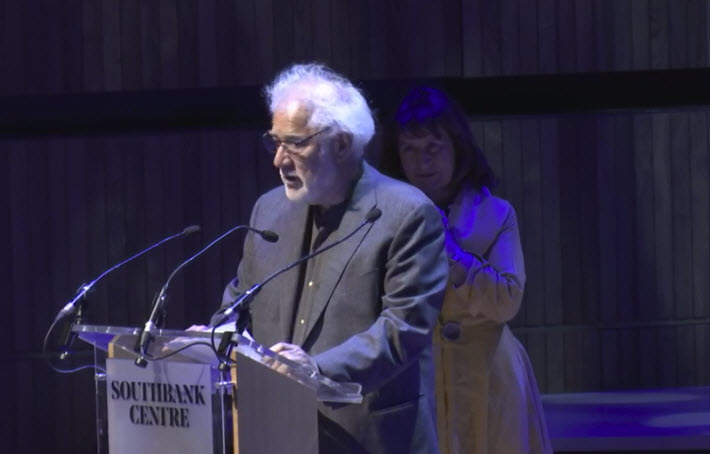 Capping months of shortlisting and a public vote, the Man Booker Prize for Fiction’s 50th anniversary ‘Golden Man Booker’ best-of-the-best novel has been named. Michael Ondaatje’s ‘The English Patient’ is from the “middle” decade of the prize’s five, the 1990s. 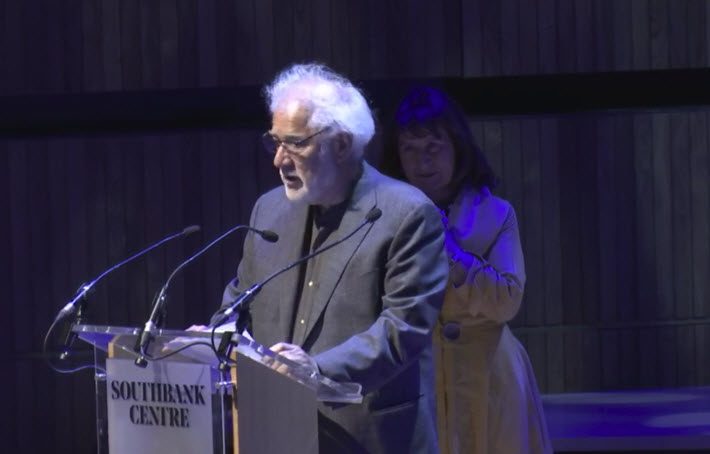 At London’s Southbank Centre, Michael Ondaatje speaks of the many great novels that will never be recognized with a Man Booker Prize. Image: Golden Man Booker Live livestream

‘Great Humanity Written Into Every Page’

The announcement from the Baroness Helena Kennedy in a program called Golden Man Booker Live is the culmination of a weekend festival of events at London’s Southbank Centre. The program is focused on the half-century of the prize, which is widely viewed as the world’s most coveted of awards for literary fiction.

“We’re living in difficult times,” Kennedy said, “and the great joy and great nourishment that comes from reading is what we need now.”

Accepting the award, Ondaatje took a compelling, gracious tack, saying, “Not for a second do I believe this is the best book on the list.” In a nod to each of the other shortlisted books, he revealed, “I’ve not read The English Patient since it came out in 1992, and I suspect and know more than anyone that perhaps it’s still cloudy with errors.”

“Tonight, it is important for us to admit that there are great books that never receive the Booker Prize.” Ondaatje thanked his publishers in the UK (Bloomsbury), Canada (McClelland & Stewart), and the States (Knopf). “And also small presses everywhere, for they were the first to publish me.” 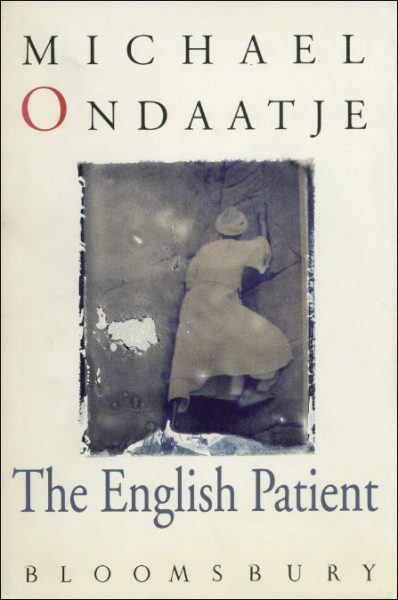 The 1992 cover, from Bloomsbury

In speaking onstage before it was known that The English Patient had won, Ondaatje described for the Southbank audience how the story of the novel (its nine-Oscar-winning film treatment was released in 1996) came to him as a gathering of characters calling for his attention. Ondaatje, in fact, made the point that the late Anthony Minghella, who directed the film, “I suspect probably had something to do with the results of this vote.”

“Where did they come from? How was a patient burned? Above all, where were they? A short while later, there was a scene of a thief trying to steal a photograph that had been taken of him during the war.

“As these characters became known, the scenes became joining up. We were in Italy, in the last days of the Second World War. …

“Writing a book for me is often an archeological unearthing. So the story will move into the layers of the past, and then return to the present where, as one writer says, ‘Never again will a single story be told as though it were the only one.'”

In effect, the special award names The English Patient the “best of the best” among the 51 Man Booker Prize for Fiction wins over its first half-century of operation. (The Man Booker International Prize is a separate, more recently established prize for work translated into English.)

“Writing a book for me is often an archeological unearthing. So the story will move into the layers of the past, and then return to the present.”Michael Ondaatje at 'Golden Man Booker Live'

As Publishing Perspectives readers know, five jurors were chosen to each read a decade of the Man Booker winners, creating the five-book shortlist announced in late May at the Hay Festival. The public then voted on those five books through June 25. The celebratory weekend of workshops, readings, and other events was opened on Thursday evening by Camilla, the Duchess of Cornwall, who hosted a reception of past Man Booker Prize winners at Buckingham Palace.

The juror chosen to read the 1990s’ Man Booker Prize winners and choose the best of that decade was author Kamila Shamsie, the winner of this year’s Women’s Prize for Fiction for her novel Home Fire (Bloomsbury), itself longlisted for the Man Booker 2017.

And at the Golden Man Booker Live event at Southbank, Shamsie was on hand to talk about her selection of The English Patient. Also along was actor Chiwetel Ejiofor to give a reading of an extract of the book. 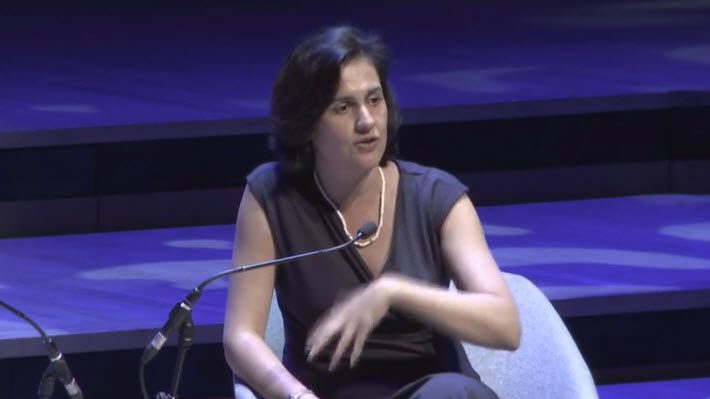 ‘The English Patient’ was one of the outstanding books of my life,’ said author Kamila Shamsie in discussing her selection of it for the 1990s shortlisted title. Image: Golden Man Booker Life livestream

‘Going Back to People You Love’

One of the most profound comments, of many, heard from the stage Sunday night, came from the juror Kamila Shamsie, in talking about her decision to name The English Patient the best of the 1990s.

“I’ve changed, the world has changed,” Shamsie said in speaking from the stage about her selection of the Ondaatje. “But it now feels like going back to people you love,” to reread the book.

“Few novels really deserve the praise: transformative. This one does.”Kamila Shamsie on 'The English Patient'

In her rationale for her selection, Shamsie has said, “The English Patient is that rare novel which gets under your skin and insists you return to it time and again, always yielding a new surprise or delight.

“It moves seamlessly between the epic and the intimate—one moment you’re looking at the vast sweep of the desert and the next moment watching a nurse place a piece of plum in a patient’s mouth. That movement is mirrored in the way your thoughts, while reading it, move between  large themes—war, loyalty, love—to  tiny shifts in the relationships between characters.

“It’s intricately (and rewardingly) structured, beautifully written, with great humanity written into every page. Ondaatje’s imagination acknowledges no borders as it moves between Cairo, Italy, India, England, Canada—and between deserts and villas and bomb craters. And through all this, he makes you fall in love with his characters, live their joys and their sorrows. Few novels really deserve the praise: transformative. This one does.” 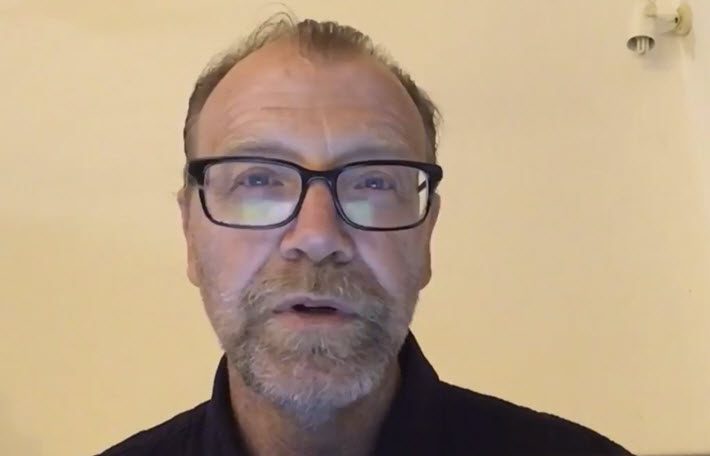 The author George Saunders speaks to the Southbank audience by video of literature’s role in creating ‘viral goodness,’ necessary in the political times of the moment. Image: Golden Man Booker Prize livestream

‘An Unexpected Boost’ and ‘Viral Goodness’

Also at the event in London were shortlisted authors Penelope Lively and VS Naipaul. Additional performance readings were given by actors Fiona Shaw, Geoffrey Streatfield, and Meera Syal. And the four other decades’ jurors were there.

As a reminder, the five titles shortlisted and their jurors are:

In a particularly touching and intelligent bit of commentary, the 85-year-old author Penelope Lively, whose Moon Tiger won the Man Booker Prize in 1987, said that today, the book feels likes something written by someone else. She called the shortlisting “an unexpected boost” to the book and detailed the geopolitical background of its original conception.

‘Lincoln in the Bardo’ “had something else in mind. It wanted to model what I’ve come to think of as ‘viral goodness'”George Saunders

And the American author George Saunders, winner of the 2017 Man Booker Prize for Fiction for his Lincoln in the Bardo, sent a videotaped message (because of a teaching engagement that prevented him being in London), offered the phrase “viral goodness” in his commentary.

“By describing ourselves in words in the form of a story,” Saunders said, “we open the world out, fill it with detail, find more in it. And some of what we find may be good and even helpful to us.

“When I started writing Lincoln in the Bardo, I thought I was writing about grief and loss, and I was, of course. But the book also had something else in mind. It wanted to model what I’ve come to think of as ‘viral goodness’—a phenomenon wherein a group of people, mutually inspired, find themselves, engaged in a larger task of goodness by way of small, positive acts.” 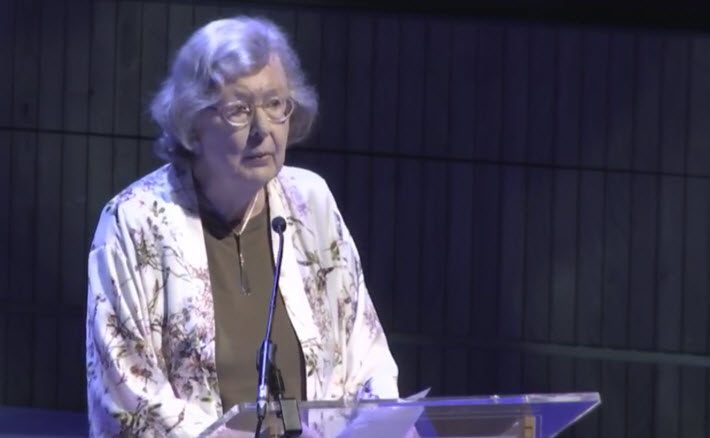 Social media content about the ‘Golden Man Booker’ 50th anniversary events is being hashtagged #ManBooker50. More from Publishing Perspectives on the Man Booker Prize for Fiction is here.