At a high-level conference organized by CANIEM, Mexican publishers were encouraged to embrace change and innovation, including digital strategies to promote reading and book sales.

A Call for Industry Self-Assessment

At this month’s Innovation and Technology Fair in Mexico City, the country’s publishing trade organization sponsored a forthright discussion of what one educational publisher says is the industry’s need to “accept our incapacity” and “seek alliances” to move forward.

More than 170 industry publishers, editors, entrepreneurs joined the National Chamber of the Mexican Publishing Industry (CANIEM) on July 12 to engage both in networking and in some frank debate about the status of the industry today and where traditional viewpoints may be holding back progress.

When it comes to embracing technology and innovation, said Fernando Esteves Fros, director general of the educational publisher SM Ediciones, publishers need to “accept our incapacity, and seek alliances with companies that can facilitate innovation and the application of technology.

“One of publishing’s big problems,” said Esteves Fros, “is that it doesn’t have a panoramic view, and it needs to ‘go out and see the world’ more.”

He pointed out that training for Mexican publishers and booksellers is in short supply. “Publishing is an empirical industry,” he said. “There’s no such thing as a degree in publishing here, and the industry doesn’t transmit the knowledge gained.”

“The industry needs a dose of humility, to incorporate people who are doing new things, but not to expect a short-term gains, as change takes time.”Fernando Esteves Fros

Rivalry plays a role in the problem, Esteves Fros said. “Because ‘knowledge is power,’ publishers are reluctant to share their knowledge.”

“Business and commercial intelligence—along with information and data analysis—are everyday activities in other industries, but are still a novelty in publishing. Metadata is the ‘meta-theme’ in publishing, and we need to harness that information.”

According Esteves Fros, publishers are also reluctant to consult the public about what to publish. “A ‘merchant mind’ can’t properly oversee the publication of great literary works,” he said.

“At decision-making time,” he said, “the publisher is guided by the book, not by the public, or by taste. Publishers [instead] need to take advantage of technology” to gather data on the consumer and be affected by what it reveals. “Sales are only in a publisher’s hands to a certain extent. More marketing and targeted launches can be used to better influence those sales.”

He also put forward a need for the industry to incorporate external talent, something he said it’s been slow to do, given that Mexican publishers are used to doing things in the traditional way, and often what’s new doesn’t get attention it deserves.

“The industry,” said Esteves Fros, “needs a dose of humility, to incorporate people who are doing new things, but not to expect a short-term gains, as change takes time.”

Digital and Social: ‘Not Merely a Change of Format’

Publishers in Mexico need to do more to harness social media, said Esteban Constante of El Librero de Gutenberg, a Mexican online site for book lovers that began life as a Facebook community, garnering more than 7 million followers before migrating to its own platform.

“Don’t be afraid of Facebook, which is a great tool for readers and publishers,” he said, despite the gathering hurdles the vast Internet community is facing in terms of ethical, privacy, and financial issues.

His point that “Publishers and independent authors need to create a community, and the industry needs to learn how to use such platforms” was well taken, though it’s clear less than two weeks later, of course, that other platforms than Facebook may for the moment be more attractive.

On Thursday (July 26), the Wall Street Journal‘s Akane Otani and Deepa Seetharaman would report that Facebook lost a prodigious US$119.1 billion in market value, following the announcement from Menlo Park of the company’s “privacy first” attempt to quell criticism related to Russian cyber operatives’ use of Facebook data in Moscow’s GRU assault on the United States’ election system in support of Donald Trump.

“Digital publishing adds value and is not merely a change of format,” according to María Fernanda Castro of VitalSource, Ingram Content Group’s e-textbook platform. “But there’s a lack of information on how digital content is being consumed.”

What’s more, said Fernanda Castro, many publishers don’t have the resources or staff to publish in multiple formats and attend to all business models. This is where IT  providers can allow publishers to access technology and become more cost-effective.

“Multi-format [approaches] allow for readers’ attention to be maintained and make a book an interactive space,” she said, highlighting the importance of doing consumer analytics–which can be coordinated with social media work.

“But information can also become disinformation,” she said, “and we need to be able to discern that and harness only the useful information.”

Attendees were also reminded of the importance of libraries in promoting book-buying, and not just reading. Market research shows that library lending aids book sales, according to Mike Shontz, account executive with OverDrive.

“Libraries market books that retailers do not,” Shontz told the conference, “and publishers can promote an author through those libraries.”

Consumer data is part of the service library lending can provide, Shontz said, in addition to facilitating wider market access for books. OverDrive provides library statistics to publishers, he said, allowing them to gauge reading habits to design marketing strategies.

“Metadata is the future of publishing,” he said, “because the more metadata you have, the more market access you have.”

Metadata: ‘Push Us Toward Innovation’

“Metadata offers publishers the opportunity to ‘put the house in order,’” he said. “It provides the coordinates that allow us to navigate in this increasingly complex industry.”

Publishing analytics in Mexico received a boost in late 2017 with the arrival of Nielsen BookScan in late 2017, its first foray into a Spanish-language market in the Americas. 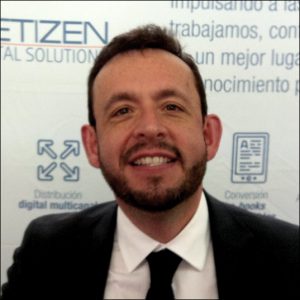 According to Jaime Iván Hurtado, CEO for Mexico at Colombia-based Hipertexto-Netizen Digital Solutions, publishers have a responsibility to perform data analysis.

“Metadata goes beyond the circulation of books,” he said, “and should be applied to the creation of content.

Iván Hurtado stressed the need for the an organization in Mexico to promote connectivity and data usage to facilitate better circulation both in the home market and in other Spanish-speaking territories.

“Publishers in Mexico need a platform to access and manage metadata,” he said. “We need to generate an atmosphere to allow that to function at a local level, specific to this country, as every market is different.

“If you can achieve that at a national level, you can then link that to the metadata of other countries in Latin America,” said  Iván Hurtado.

“And metadata allows books to find us,” said Diego Echeverría, “rather than us having to find them.” The founder and director of Mexican ebook publisher Ink-It, Echeverría heads up CANIEM’s still-new innovation commission, set up in last year to identify ways the country’s publishers can embrace new technologies.

“One of the commission’s aims is to bring together young people, young entrepreneurs,” said CANIEM president Anaya Rosique says, “because they have a much clearer and fresher vision of the future, and we’ll learn from them as they push us toward innovation.

More from Publishing Perspectives on the Mexican publishing market is here.