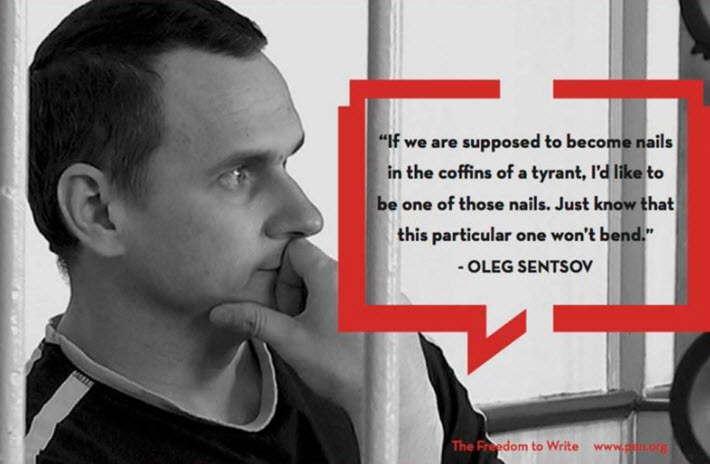 On the run-up to Russia’s hosting of the World Cup, a blue-ribbon PEN group of more than 50 key writers and other influencers tell Vladimir Putin, ‘the eyes of the world will be on the country.’ 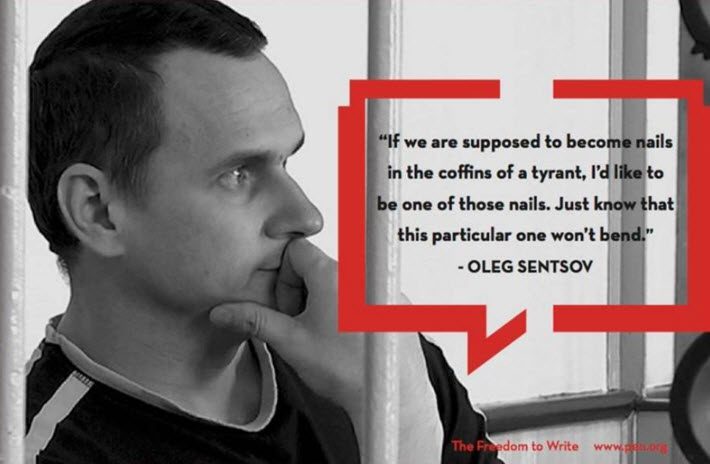 Oleg Sentsov is seen here in a postcard produced by PEN to raise awareness of his protracted incarceration under the Putin regime. Image: Human Rights in Ukraine

Sentsov Is Weeks Into a Hunger Strike

An especially lustrous group of authors, journalists, and activists has signed a letter to Vladimir Putin, conveying from PEN America a demand for the release of Oleg Sentsov, the 2017 recipient, as Publishing Perspectives has covered, of the PEN/Barbey Freedom to Write Award.

Sentsov, the Ukrainian filmmaker, has been imprisoned in Russia for more than four years. the start of the Russian-hosted World Cup on June 14 will mark a month since Sentsov began a hunger strike (May 14) in Prison Colony No. 8, the so-called “Polar Bear Prison” for its location above the arctic circle.

In her article at The New Yorker today (June 4), Masha Gessen writes, “Hundreds, perhaps thousands, of people in Russia and in other countries are counting the number of days that Oleg Sentsov, a Ukrainian film director incarcerated in Russia, has been on hunger strike.

“Every day, hundreds of people note the count in their Facebook posts: ‘Day Ten,’ ‘Day Seventeen.’ Today is Day Twenty-Two.”

“As Russia prepares to host the World Cup in the coming weeks,” the letter reads, “the eyes of the world will be on the country.

“Sentsov’s campaign will rightly draw attention to the injustice of his detention and that of dozens of other political prisoners in Russia. He has told his lawyer he is willing to die to bring global attention to his cause.

“In the spirit of this unifying global event, we therefore urge you to take this opportunity to make a powerful statement by releasing Oleg Sentsov immediately and unconditionally. His life depends on it.”

Sentsov, born in the Crimea, was detained there in May 2014 and sentenced to 20 years in a Russian prison on charges of terrorism on August 25, 2015, in what appeared to many as a politically motivated case in retaliation for Sentsov’s outspoken criticism of Russia’s annexation of Crimea.

Media messaging from PEN recounts how appeals against the original verdict were rejected by the Russian Supreme Court in November 2015 and June 2016. A request for Sentsov’s extradition to Ukraine was denied in October 2016 on the grounds that he had become a Russian citizen upon the annexation.

In an article by Halya Coynash for Human Rights in the Ukraine about a year ago, portions of Sentsov’s letter in thanks for the PEN award are quoted. One passage from the filmmaker reads:

“It’s very hard to feel like a person when you’ve lost the most important thing to you.

“And this is why it is so unbearable to hear children’s voices, which sometimes the wind carries in from beyond the [prison] fence.”

The new letter from PEN to Putin, signed by more than 50 luminaries, says, in part, “We, the undersigned artists, writers, filmmakers, and activists, join PEN America to call for the immediate and unconditional release of the wrongfully imprisoned Ukrainian filmmaker Oleg Sentsov. In light of Sentsov’s ongoing hunger strike, our request is urgent.”

But as Gessen writes in her New Yorker piece, it may take more concerted action to persuade the Kremlin to act.

“Sentsov’s hunger strike,” she writes, “appears to be timed for the World Cup…  With the attention of international media trained on Russia, perhaps the Kremlin can be compelled to pay attention to Sentsov’s demand, especially if there is a risk that foreign dignitaries or even teams will decline to attend the tournament.”