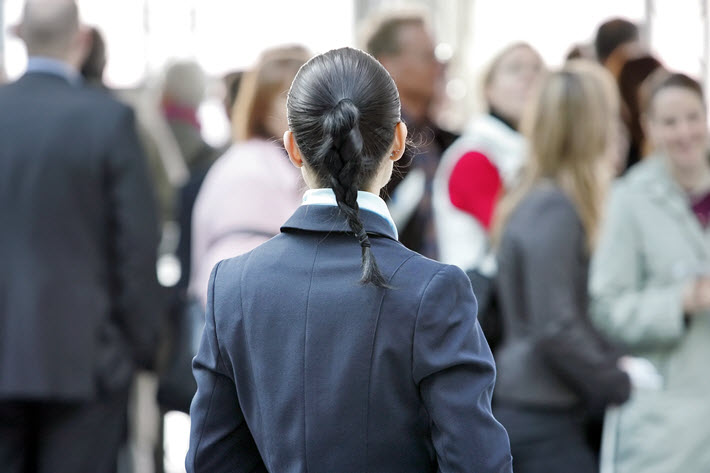 Asking this year ‘if abuse and bigotry are anything but the norm,’ the annual VIDA Count for 2017 looks at how women are represented and reviewed in US literary publications. 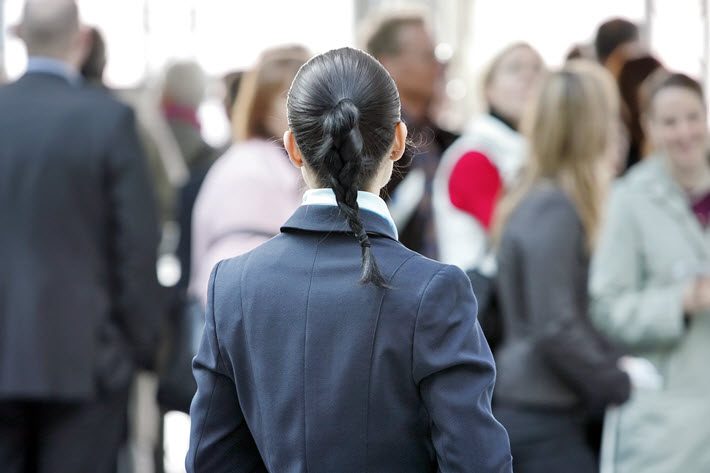 ‘Anything But the Norm’

There seems, so far, to have been a somewhat muted reception to the statistics of the newly released ninth annual VIDA Count. This may, however, be nothing more than the reward an organization receives when reaching its ninth year of faithful reportage in a given field.

The report was released to the press on Monday (June 18), almost a month after the VIDA was given the 2018 Authors Guild Foundation Award for Distinguished Service to the Literary Community, as covered by Publishing Perspectives.

Each year’s VIDA Count is the flagship output of this feminist nonprofit organization dedicated to exposing the lack of gender equality in parts of the literary industry and community, primarily in literary news coverage and reviews, literary magazines, and cultural media. In its mission statements, VIDA also includes a ringing intention of “amplifying historically-marginalized voices, including people of color; writers with disabilities; and queer, trans and gender nonconforming individuals.”

VIDA’s insights and interpretations are a particularly good fit this summer with an American mainstream entertainment industry facing ongoing pressure to develop content that (a) serves a far more diverse consumer base than traditionally has been targeted; and (b) is produced by a diverse workforce that better reflect’s the country’s population.

“In this current political climate, amid the #MeToo era,” write Amy King and Sarah Clark in this year’s introductory essay, “we must ask if abuse and bigotry are anything but the norm in the world of American arts and letters.”

The main VIDA Count looks at 15 print publications in 2017, “analyzing how many women and gender minorities are represented.

“For the purposes of the VIDA Count,” the team writes, “we do not differentiate between cis men and binary trans men, so as not to invalidate binary trans men’s identities, and with the understanding that many men experience oppression across various axes that impact their experiences of and access to male privilege.”

The group also makes a good point about the inherent challenges of bringing online content into the mix. “We do not incorporate online content in our data. It is too easy to confine women, gender minorities, and other marginalized writers to cost-effective web platforms, which frequently pay differently (or don’t pay at all), compared to their print counterparts. For these reasons, as well as for consistency in the VIDA Count from year to year, we will only be focusing on the women and nonbinary writers afforded space in print.” 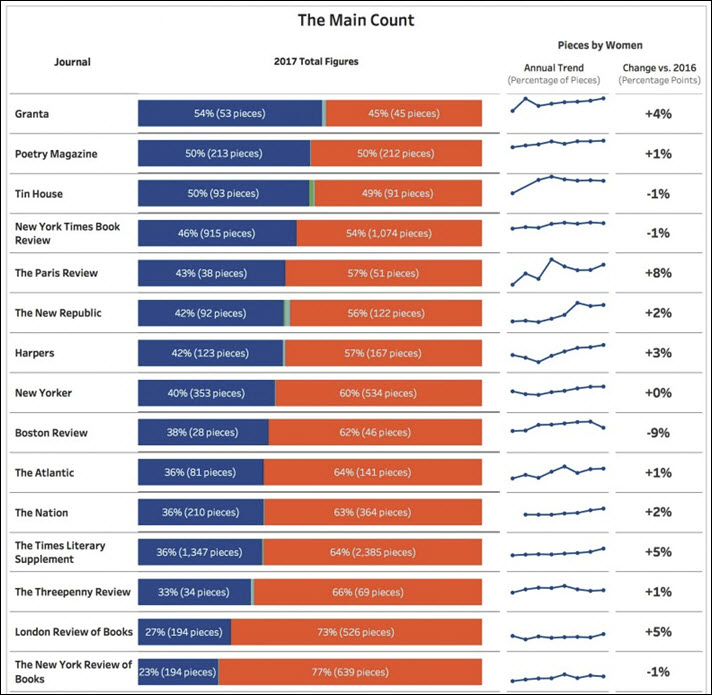 Charting the 15 major literary publications of the main VIDA Count in 2017: representation of women in published content. Image: VIDA: Women in Literary Arts

And there are a series of high-level revelations in this year’s report, including these: 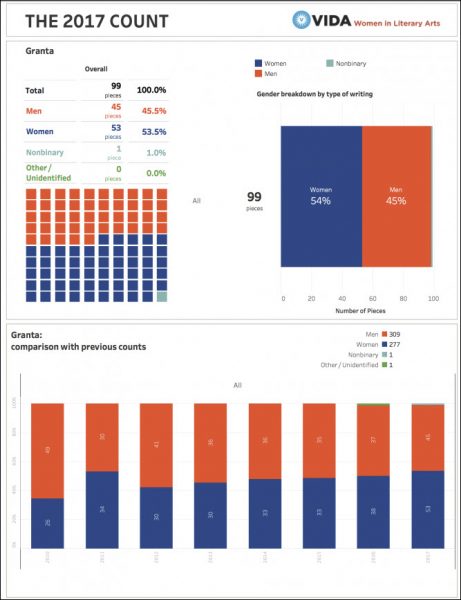 A breakdown of the VIDA Count’s report on Granta, in 2017 with 53.5-percent women’s representation in its output. Image: VIDA: Women in Literary Arts

Five of the 15 major outlets showed women to represent between 4o and 49.9 percent of their total publication:

“Of the 15 publications in our main VIDA Count, only two published 50 percent or more women writers: Granta (53.5 percent) and Poetry (50 percent).” While that’s a move up for Poetry in its performance, another publication, Tin House, moved just out of the 50-percent range it had held in 2016, dropping to 49.7 percent.

Eight of the 15 publications “failed to publish enough women writers to make up even 40 percent” of their work in 2017. And readers may be surprised at some of the publications on this part of the list, many of them being generally regarded as among the more enlightened in the business:

The Paris Review showed best improvement in 2017, showing 42.7 percent over its 35-percent performance in 2016. But 2017 was also the year in which Lorin Stein, the editor of The Paris Review, resigned amid allegations of sexual misconduct, saying in a statement, in part–as reported by The New York Times‘ Alexandra Alter and Sydney Ember–”At times in the past, I blurred the personal and the professional in ways that were, I now recognize, disrespectful of my colleagues and our contributors, and that made them feel uncomfortable or demeaned,” he wrote. “I am very sorry for any hurt I caused them.”

And The Boston Review saw the most precipitous drop, from 47 percent women’s representation in 2016 to 37.8 percent in 2017. This is another case in which an editor, the author Junot Diaz, had been the subject of allegations of misconduct. As The New York Times’ Alter is reporting this week, however, both MIT (where Diaz teaches) and The Boston Review have cleared Diaz and he retains his positions with them.

In addition to these high points in terms of male-female disparity in coverage, the main VIDA Count also notes that 10 of the 15 publications in 2017 (surpassing eight of the 15 in 2016) “published at least one piece of writing by nonbinary person. … This uptick hopefully indicates a positive upward trend of the inclusion of nonbinary people in mainstream publishing.”

The full report also includes the “Larger Literary Landscape VIDA Count” of 24 publications around literature that hold less dominance in the market than the main count’s 15. We encourage you to explore the entire report.

The Specter of a ‘New Normal’

The King-Clark essay that opens the VIDA Count this year is less incendiary than last year’s, which was the first written under the administration of Donald Trump. Nevertheless, the piece holds a dark vision of an insidious slide in the culture amid the daily assaults of the current White House administration and its hold on the Republican party in terms of discourse, human rights, and American values domestically and internationally. 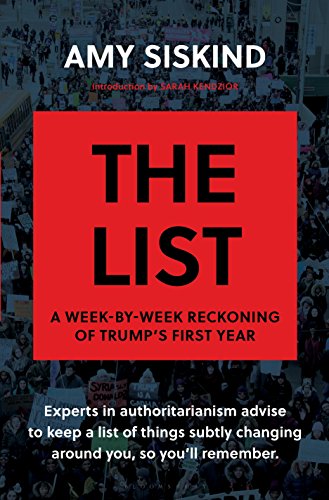 In a valuable comparison, King and Clark align their work with that of journalist and author Amy Siskind, whose The List: A Week-by-Week Reckoning of Trump’s First Year (Bloomsbury, March) is based in the warning that as a society undergoes a transition to authoritarian rule, keeping lists of the incremental changes becomes important to avoid missing the signals of one’s stumbles onto the slippery slope.

And perhaps the most compelling element of this year’s King-Clark essay comes in a simple statement of what the search and demand for gender parity is not, rather than what it is. One reason this passage works is that it points up that the organization’s efforts in support of women need not be anti-male.

“When VIDA created #saferLIT last winter,” they write, “it was not with the intent to punish or banish men, but to protect women and nonbinary writers in our community from the damaging behavior of sexual harassers and predators.

“When harmful men are given space to be heard and celebrated, they tend to use that cultural capital to meet, groom, and harm more people. When primarily white male voices are heard, it creates a dangerous lens through which the world is viewed.

“Advocating for gender parity and a firm stance against bigots and abusers isn’t censorship,” they write. “It isn’t book burning.

“It is ensuring the creation of countless books by women and nonbinary people, books that would never stand a chance in climates of violence that deny access, audience, and the freedom and safety to create in the ways white cis men have enjoyed since the beginnings of American letters.”

And in looking at the ninth year of the VIDA Count’s helpful revelations, it’s difficult not to wish that there were a parallel effort examining the output of the books industry, itself. After all, much good writing in the literary press, covered by VIDA, is about books.

Book publishing, even in the age of Netflix and Amazon Studios, does hold an anchor position in literary life. And it would be useful as a complement to VIDA’s work if there was a commensurate public reckoning of the demographics of the book-publishing houses’ catalogues each year.

More from Publishing Perspectives on VIDA: Women in Literary Arts is here.