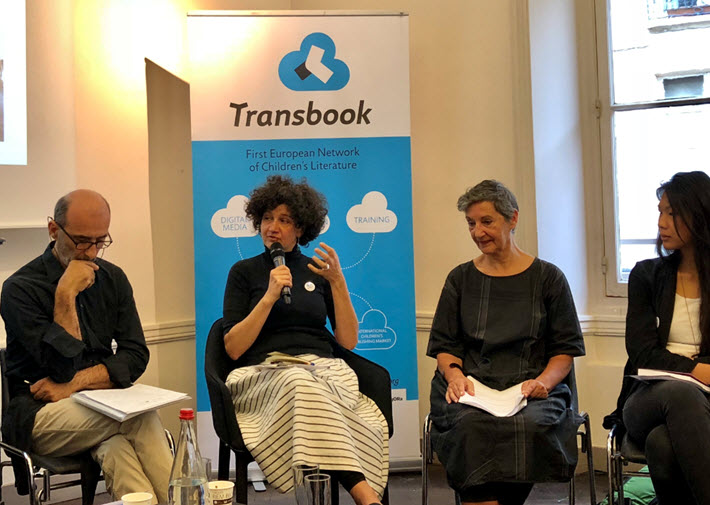 The partners brought together by the Transbook project in children’s literature tried to learn ‘what is the digital model in the publishing industry?’—and what lies ahead? 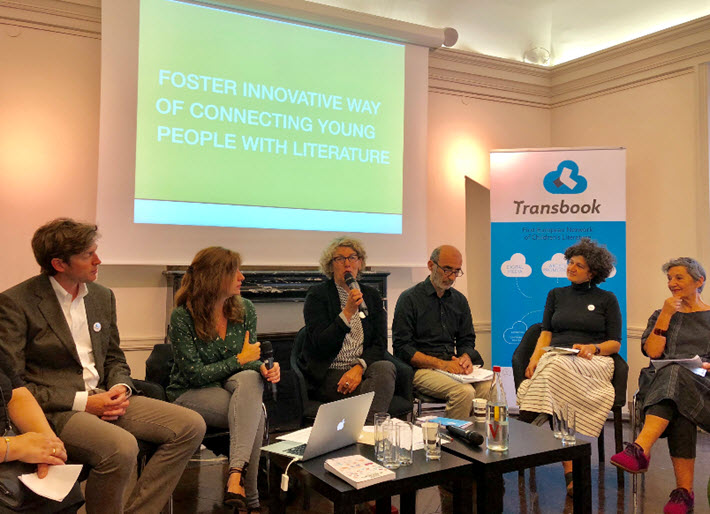 The fruits of four years of a cooperative European project, Transbook, were explored at a closing conference in Paris earlier this month.

Sylvie Vassallo directs the Montreuil Children’s Book Fair, which spearheaded the project. Vassallo said she never expected that it would take on the scale it did, and that she hopes Transbook will continue its work in a second phase.

The project’s goal is to further the digital transition in the world of European children’s books—to address the economic and creative challenges involved and to promote the sector’s digital stories internationally.

‘Europe Is a Good Place To Start’

Reviewing how the project began, Vasallo told the Paris conference, “We brought together like-minded professionals who all had questions about digital publishing.

“We brought together like-minded professionals who all had questions about digital publishing. We thought we’d all start together.”Sylvie Vassallo

“Some had started to experiment, others had reservations about it, but we thought we’d all start together. We all knew artists and wanted them to become better known across borders, and Europe is a good place to start…

“We also said to ourselves regarding digital media, [that] we can’t look just at the creative and artistic side but we should look at the more useful side: what is the digital model in the publishing industry?”

On the ground, the Transbook project was organized around three actionable intentions, with a goal of working with all relevant players including children’s book fair organizers, booksellers, and librarians.

The three key intentions were to:

Astro Cat: ‘How To Get People To Pay?’ 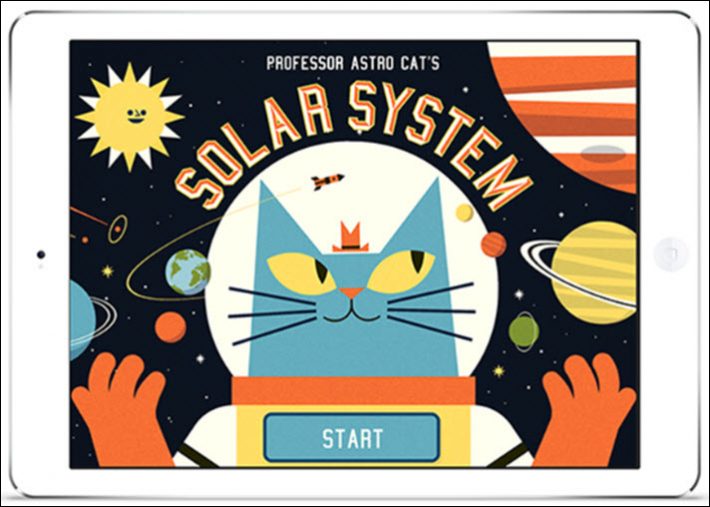 Sam Arthur—co-founder of Nobrow, which since 2008 has been producing books and graphic novels, many for children—gave a straightforward assessment of trying out a new creative practice. “Our business is based on the idea that the book as an object is tactile and something you want to keep forever.

“With digital projects,” he said, “we wanted to approach this the same way. Lots of apps are free and low-quality.” 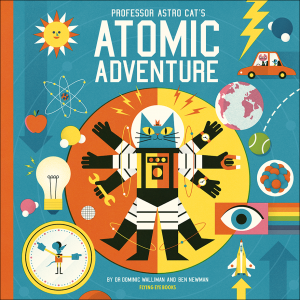 So Nobrow chose Professor Astro Cat’s Solar System, a book that Arthur said has been translated into 20 or so languages. The app proved to be much more challenging. Nobrow set up Minilab studios alongside its publishing division, planning to make “beautiful digital content for children.”

“At Minilab” Arthur said, “we have in-house illustrators (such as Ben Newman, who illustrates Astro Cat), as well as game designers, developers and coders.

“The guys who run that division are very specialized and it’s an entirely different business from our book publishing,” he said. “You have to make screen time matter. Most of us as parents are trying to get our kids away from screens so our approach was, if they’re going to be doing it, then make it quality.” 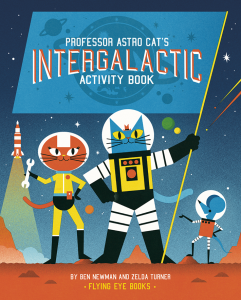 The Professor Astro Cat’s Solar System app had good support from the Apple Store, Arthur said, and good numbers in terms of downloads when it was launched.

“But the issue is how to get people to pay for this in the long term,” he told the conference.

“With a book, you have a year while it’s in the shop. With an app, once it comes off the main menu in the Apple Store, it kind of disappears and you have an extra marketing cost.

“With Professor Astro Cat, it already has a brand, so it’s got a steady flow which is good, but does it justify the amount of work that goes into it? Maybe for bigger players it does, but for us, is it sensible?”

Nobrow looked into a subscription model and an app model, and although it was good to have “Astro Cat” available in both medias and there was a convergence because of its presence in both digital and literature festivals, overall, said Arthur, he wasn’t sure if the budget for the app was entirely worth it. 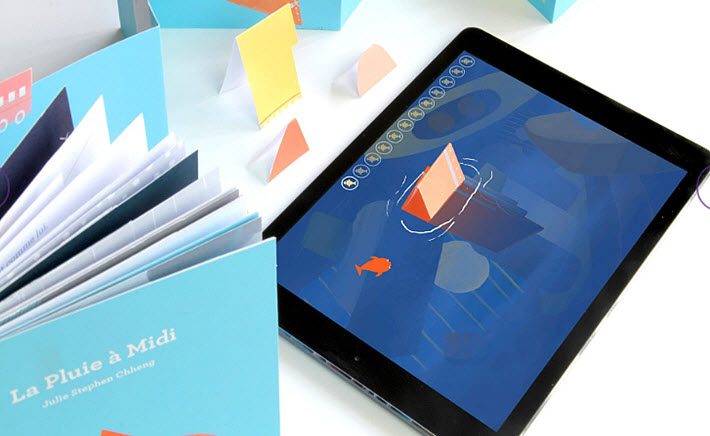 The ‘La Pluie à Midi’ app and book, parts of which yields paper shapes to use with the tablet screen. Image: Volumique.com

Julie Stephen Chheng is a Franco-Chinese artist and pop-up books author. She talked about her experience as a young artist involved in Transbook.

As a graphic artist, she said, she was “born into digital language,” and she discussed a book she designed, La Pluie à Midi (Rain at Noon) for Éditions Volumiques, a studio that develops games and books using complementary aspects of print and digital media.

La Pluie à Midi is both a book and an app, with paper elements that can be used with the app.

Getting financing to make her book and app from prototypes to the end results took “absolute determination,” said Chheng. 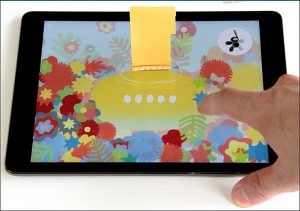 She found funding from both private and public entities, and told the conference audience that looking for financing with new media partners, such as producers, sometimes wasn’t the best thing for creativity because their expectations about returns on investment weren’t the same.

Éditions Volumiques uses the Apple Store and Google Play but “it’s not the same system as a bookshop network,” Chheng said.  “A  lot is by word of mouth and you have to do lots of workshops,”

Here, Transbook stepped in and helped, by inviting Chheng to Bologna to give a master class and by introducing her to people in the book industry.

“This was very important to me,” she said, “not to feel alone. … It allowed me to present my savoir faire and it gave me the opportunity to meet other creators.”

Chengg said she also set up an exhibition in the Paris suburbs and worked with children, assisted by librarians.

Above is a video created by Chheng to introduce La Pluie à Midi. 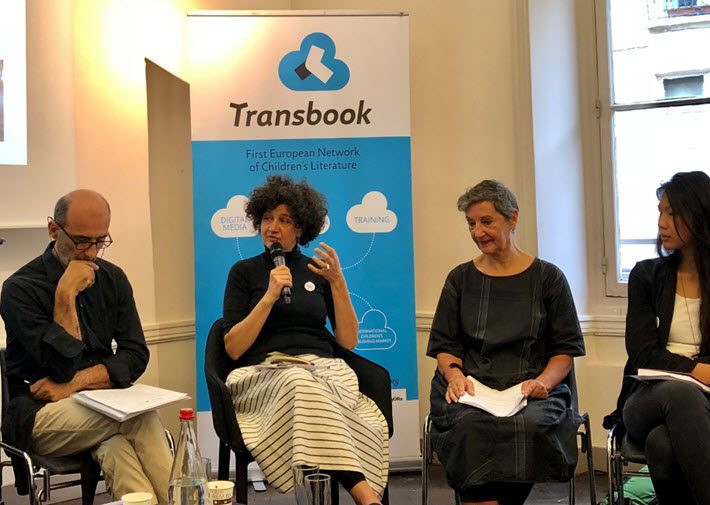 Roser Ros, of Tantàgora—which facilitates meetings with artists, publishers, and people in the digital domain and hosts FLIC, an annual literary and arts festival for children—used the Transbook project to unite local cultural and educational policies.

Selling apps online is “not the same system as a bookshop network, A  lot is by word of mouth and you have to do lots of workshops,”Julie Stephen Chheng

This resulted in the creation of a digital laboratory, LABDig, dedicated to children’s literature. Ros added that her organization became so knowledgeable about digital children’s books that they were able to give librarians expert advice.

Miroslava Vallova of the Literary Information Centre (founded by the Slovak Ministry of Culture)—which, among other things helps Slovak artists and authors to develop their careers internationally—said that thinking about digital publishing in a profound way was invaluable.

The Slovak illustrator Daniela Olejníková was inducted into Transbook in 2014 and began to gain notoriety on the international scene as she was introduced to French publishers, traveled to Sarrebrücken, London and Bologna. Her work has since sold to French and German publishers and she and other Slovak artists took centerstage at the Montreuil Children’s Book Fair in 2017.

And it was Transbook’s third mission, Vassallo told the conference—to encourage people to discover digital books for children, discover new artists and above all to find a way to engage children with literature—created the most lively debates among Transbook partners.

The partners decided to organize meetings once a year at the Bologna Children’s Book Fair with artistic directors of festivals and children’s cultural organizations.

Ilaria Tontardini of the Hamelin Cultural Association described how her organization held a series of training sessions for Italian librarians and teachers about the use of apps and illustrated children’s books.

Hamelin also co-curated with the Montreuil Children’s Book Fair a Transbook exhibition of 20 works for children including ebooks and apps. The show traveled to France, Italy, Slovakia, Spain and the UK.

Gerhard Jäger and his team from Art Basics for Children created an interactive library of work and play stations as an annex module for the exhibition. His organization, which focuses on education, creative learning and visual literacy works with children, teachers and libraries.

Takeaways: ‘We All Cried Together About Brexit’

‘Isola Bella,’ by Slovak artist Daniela Olejníková, who was inducted into the Transbook project in 2014. Image: Daniole.com

In their closing remarks, the partners commented on what they’d learned from the experience of participating in Transbook.

“For us, it was a reminder of the importance and love for our European cousins. The cross-pollination of ideas was wonderful.”Sam Arthur

Vallova said it made her take stock of the distinct specificities of artistic traditions in each country.

Roser and Tontardini agreed that the richness lay in meeting, sharing, asking questions, and finding answers, even if there were more questions.

Arthur’s remark was poignant: “For us, it was a reminder of the importance and love for our European cousins. The cross-pollination of ideas was wonderful.”

And in answer to a question from the audience about whether Transbook would still be working with British publishers post-Brexit, Vassallo replied, “Absolutely. On the cultural side it seems indispensable. It’s a country where the transition from paper to digital has happened quite smoothly.

“We all cried together about Brexit.”

For more information about Transbook click here for the white paper, in French and in English.