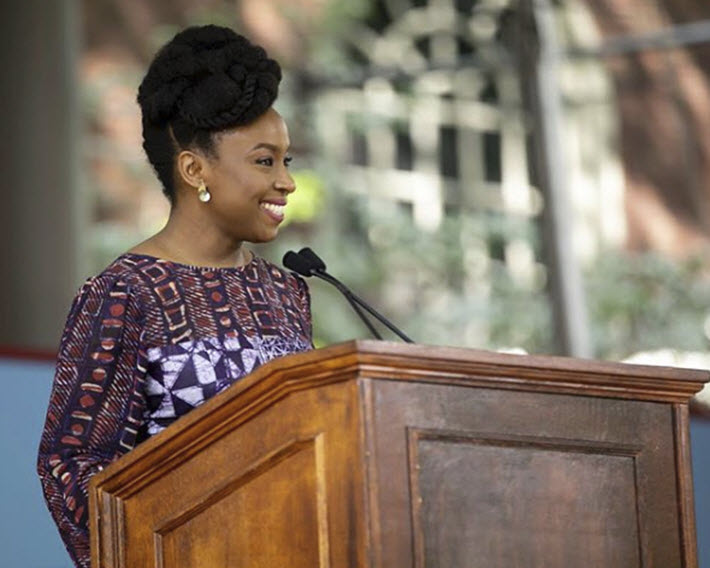 The PEN Pinter Prize will be given on October 9 to Nigerian-born Chimamanda Ngozi Adichie at the British Library, in honor of how she ‘guides us through the revolving doors of identity politics, liberating us all.’ 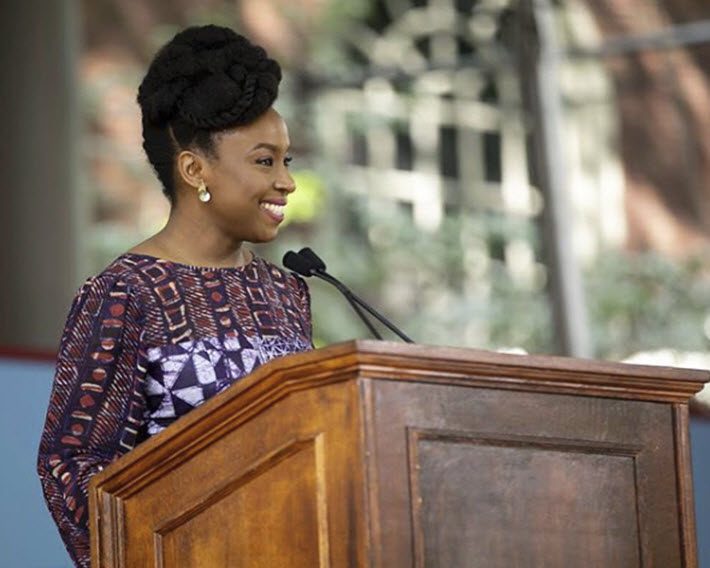 Chimamanda Ngozi Adichie speaks at Harvard Class Day on May 23. Image: From the author’s Instagram account, her ‘Wear Nigerian’ images

‘Showing Us What Is Important in the World’

The acclaimed Nigerian author Chimamanda Ngozi Adichie has won the PEN Pinter Prize for 2018, one of the world’s most coveted awards in the world of socially relevant and culturally impactful literature.

In a comment on the word of her selection, Adichie is quoted, saying, “I admired Harold Pinter’s talent, his courage, his lucid dedication to telling his truth, and I am honored to be given an award in his name.”

The award is given by English PEN, and is supported by the Blavatnik Family Foundation, Ruth Maxted, and the Thompson Family Charitable Trust. It’s of course named for the late Harold Pinter, the master playwright (1930-2008), who was a vice-president of English PEN and a tireless crusader for human rights and, particularly, for an end to torture.

The prize is awarded annually “to a writer of outstanding literary merit from Britain, the Republic of Ireland, or the Commonwealth who, in the words of Harold Pinter’s Nobel Prize in Literature speech, casts an ‘unflinching, unswerving’ gaze upon the world and shows a ‘fierce intellectual determination … to define the real truth of our lives and our societies.'”

Adichie is to receive the Pinter Prize at a public ceremony on October 9, the eve of the Frankfurter Buchmesse, at the British Museum in London. On that occasion, she’ll deliver an address to the audience.

The jurors who have selected her as this year’s honoree are judges: 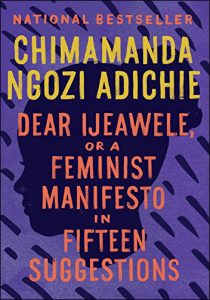 In her statement for the jury about the choice of Adichie for this year’s award, Freely says, ““In this age of the privatized, marketized self, Chimamanda Ngozi Adichie is the exception who defies the rule.

“In her gorgeous fictions, but just as much in her TED Talks and essays, she refuses to be deterred or detained by the categories of others. Sophisticated beyond measure in her understanding of gender, race, and global inequality, she guides us through the revolving doors of identity politics, liberating us all.”

Not for nothing, of course, does Adichie’s first name mean “my personal spirit will never be broken.” And, as Lady Antonia is quoted saying for the announcement, “I greet the 10th award of the PEN Pinter Prize with great enthusiasm. Not only is Chimamanda Ngozie Adichie a brilliant, compelling writer but she embodies in herself those qualities of courage and outspokenness which Harold much admired.”

And English PEN’s director, Antonia Byatt, is quoted, as well, saying, “Chimamanda Ngozi Adichie’s writing and activism has travelled across so many frontiers showing us what is important in the world. She is a very worthy winner of this extraordinary prize.”

In October: The International Writer of Courage

“We now live in a culture of calling-out, a culture of outrage. And you should call people out, you should be outraged. But always remember the context. And never disregard intent.”Chimamanda Ngozi Adichie

In one of the most compelling elements of the Pinter each year, Adichie will announce her co-winner, the International Writer of Courage 2018, selected from a shortlist of international cases supported by English PEN. Quoting from the organization’s media messaging, “The recipient will be an international writer who is active in defense of freedom of expression, often at great risk to their own safety and liberty.”

The PEN Pinter Prize 2017 was awarded to poet Michael Longley, who shared the prize with Iranian poet Mahvash Sabet.

And of special importance in this 10th year of the prize, Faber & Faber will produce, with the support of the Pinter Estate, a private printing of a limited-edition anthology of the 10 Pinter Prize lectures. That and the annual pamphlet for the event will be offered to the audience at the British Library on October 9. Tickets are to be on sale soon at the library’s site.

Born in 1977, Adichie’s writings, now translated into more than 30 languages, include most recently Dear Ijeawele, or a Feminist Manifesto in Fifteen Suggestions (Random House/Anchor, 2017).

Speaking at Harvard in May: ‘Intent Matters. Context Matters.’

And among the many glowing accolades frequently heard in association with Adichie and her work, it’s sometimes her sense of humor that may get short shrift.

In her May 23 address to Harvard’s Class Day gathering for 2018–an event in which the students, themselves, choose the speaker—she’s hilarious in describing an event in which a nervous English host introduced her as “Chimichanga.” And she uses the anecdote to highlight the necessity of knowing the difference today between malice and mistake.

While being referred to “as a fried burrito” in that instance was less than enticing, she says, it was an honest error born of anxiety on the part of her presenter.

“The point of this story,” she tells the Harvard graduates, “is not to say that you can call me Chimichanga. Don’t even think about it,” she says to the laughing students.  “The point is that intent matters. Context matters. …

“We now live in a culture of calling-out, a culture of outrage. And you should call people out, you should be outraged. But always remember the context. And never disregard intent.”

You can see Adichie’s address to the graduating seniors of Harvard on May 23, the Class Day celebration before the school’s 367th commencement, in the video below. If she were to title the address, she says, she’d call it “Above All, Do Not Lie.”