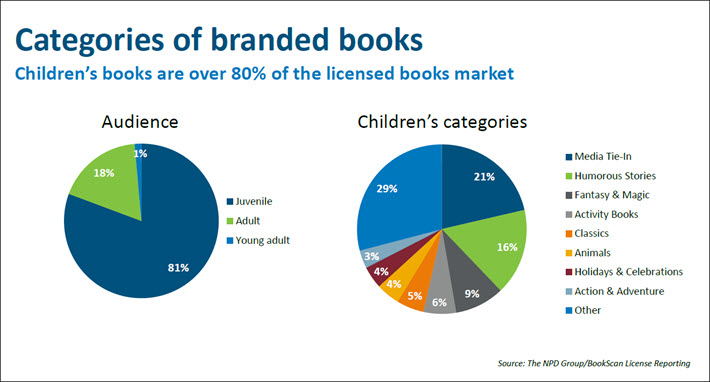 New insights into the US market, previously not visible to researchers, are coming to light now as NPD Book’s new BookScan License Reporting Service begins tracking more than 4,000 licenses and more than 10,000 ISBNs weekly. 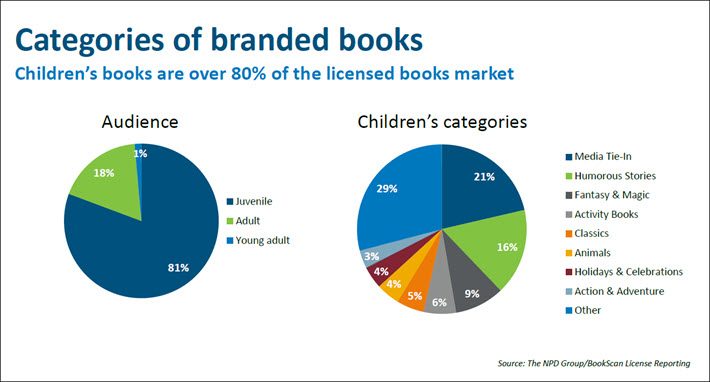 ‘Now We Can Identify Licensing’

While many in the books business are accustomed to looking at translation rights as integral to profitability in a globalized industry, licensing is less frequently discussed. And NPD BookScan is working to change that.

The executive director of business development, McLean is well known in the industry, both in the States and internationally, in many cases for her longtime focus on children’s markets and trends during her years with Nielsen. In January 2017, as Publishing Perspectives reported, Nielsen Book’s US operations were sold to the NPD Group.

“We’ve spent a year building this,” McLean tells Publishing Perspectives in an interview, “and it will get better and better because it’s a massive undertaking. Now that we have the service up and running, it will become more robust and more accurate as we go.”

The system is tracking many factors, including:

During BookExpo earlier this month in New York City, McLean spoke about some of the data she’s tracking and how NPD is working to integrate licensing into title metadata.

“Up until this point,” she says, “these properties simply weren’t identified with separate fields” in metadata.

“If someone had said to me, ‘How many Star Wars titles are available in the database, and what’s the size of that market?'” the answers would have been difficult to produce.

“Now we can identify licensing” action in the marketplace for the first time, “asking what’s the volume,” McLean says. “And second, we can say, ‘This license or franchise shows us a marketplace that’s this large,” which was impossible to discern in the past.

“Penguin Random House is the largest publisher of licensed merchandise in the United States,” McLean says. “They do the largest volume of titles and of properties they’re working with, and that’s something we couldn’t tell before. What’s more, the way BookScan works structurally, we couldn’t look at it across all publishers, either. We could look across categories, but there was no way to reliably track licensing.

“This is the first time we can begin to say with any certainty even the basics, such as ‘What is the size of book licensing in the market?'”

Books are sometimes the starting point of branded content that’s licensed by someone else—think of AA Milne’s Winnie the Pooh content. And sometimes books are created as a result of content from another medium—think of a Star Wars tie-in book.

That two-way potential factors into how NPD is characterizing what qualifies as a “license” book for its new product.

“To qualify as a licensed book,” McLean says, “the property that the book is featuring has to live on more than one platform.

“So it could be a book like [a title in the] Harry Potter [series] that goes to movie production, or it could be something like Minecraft—something out there in the world that comes into the book market.”

Let’s look at some of the insights McLean is working with this summer as the new NPD Book Licensing Report matures and yields new data. 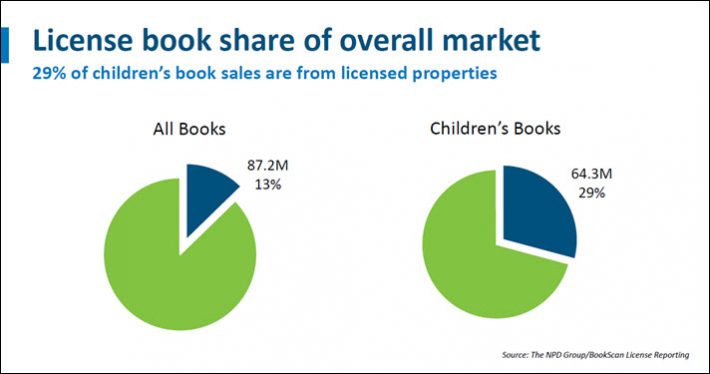 In the above graphic, McLean points out that the licensed book market in 2017 appears to be about 13 percent of the overall market, with the real strength of licensing showing up in children’s books, where almost 30 percent of US sales—some 64.2 million units—are in licensed properties.

“That’s a pretty big footprint,” McLean points out. “Big enough that you want to pay attention. Basically a third of the market is in children’s books.”

And it’s not all in the young readers’ sector, of course. “We’re looking at books, toys, home entertainment and games,” she says, but not just at children’s properties. “We’re also looking at home goods,” McLean says. “The Magnolia properties, for example, are big with HGTV,” the home decorating outlet of the Discovery network complex. “They also have a whole line of home products now hitting Target.

“And cookbooks tied to cooking shows? They’re in this data, too.

“I don’t think we’re comprehensive yet on the adult side,” McLean says about the still-new and developing tracking system behind NPD Book Licensing Report, “but in the next year, we’re going to work on that. We should be pretty comprehensive now on the children’s side.”

Where the Action Is 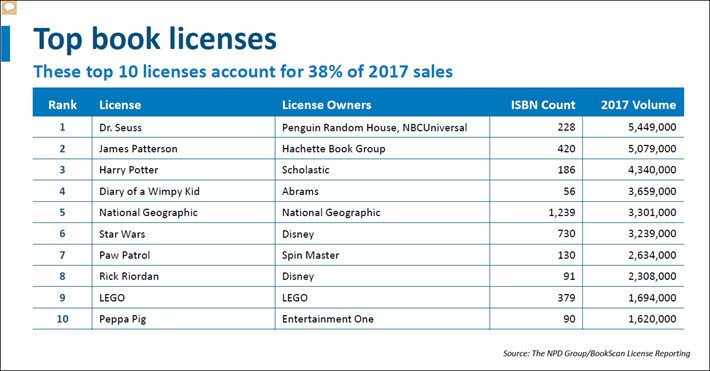 Remarkably, when it comes to top book licenses, the Dr. Seuss content is still king, “at more than 50 years old,” McLean points out. Its licenses are owned by Penguin Random House and NBCUniversal.

Interestingly James Patterson stands as a brand in these metrics, and follows Dr. Seuss, notably with more than 400 ISBNs, meaning that a large number of titles are at play in his second spot on the list.

“James Patterson as a brand,” McLean clarifies, “lives outside of the book space,” not unlike National Geographic, with the biggest number of ISBNs, 1,239.

She also cites robust action in Peppa Pig licensing, and, like many of us, notes the powerful presence of Jeff Kinney’s Wimpy Kid content, which we’ve been following here at Publishing Perspectives, too.

‘Once You Take the Data Apart’ 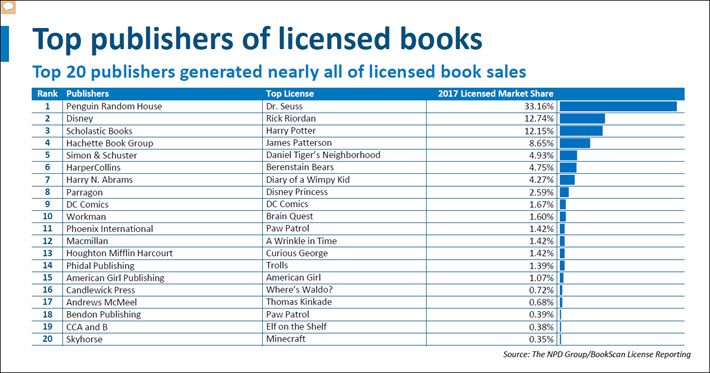 As McLean points out, in 2017, the top 20 publishers working in the licensed books space published nearly all of the country’s licensed books.

One of the most remarkable factors—in case you needed any persuading about the power of the Harry Potter series—is that Scholastic stands at No. 3 among top publishers of licensed books, but is doing it simply on the Potter material.

Compare that to No. 1, Penguin Random House with its many products, and No. 2, Disney, also incredibly product-rich for decades.

Indeed, Scholastic’s Potter books place it just behind Disney. Put another way, JK Rowling is essentially keeping up with all of Disney in the licensing space.

“This is the first time we can begin to say with any certainty even the basics, such as ‘What is the size of book licensing in the market.'”Kristen McLean

And one of the areas in which McLean sees the service becoming increasingly helpful is in identifying content areas of opportunity in the licensing market.

“Once you take the data apart,” she says, “you can actually see certain areas where brands are under- or overperforming.” She points out, for example, the “bedtime and dreams” category. “That’s a category that’s been growing and growing, and yet there are only 34 branded titles in that area.”

Clearly what lies ahead should be intriguing, as McLean and her associates develop more from this new tracking tool. In terms of areas the company is looking at for 2018, McLean names girl power, diversity, STEM, graphic novels and nostalgia. Per that last one, nostalgia, she says that the reign of backlist is heavily in sway. “Right now, the bestseller lists in kids’ books, are dominated by backlist” to such a degree that it’s looking increasingly difficult for new breakouts to occur.

Stay tuned, meanwhile, McLean says, as NPD works to follow its new development of the licensing data with audio.

“We’re discussing now with publishers,” McLean says, “about possibly getting digital audio reported to us. If we’re successful, it will be the first market view anyone has had of digital audio.”