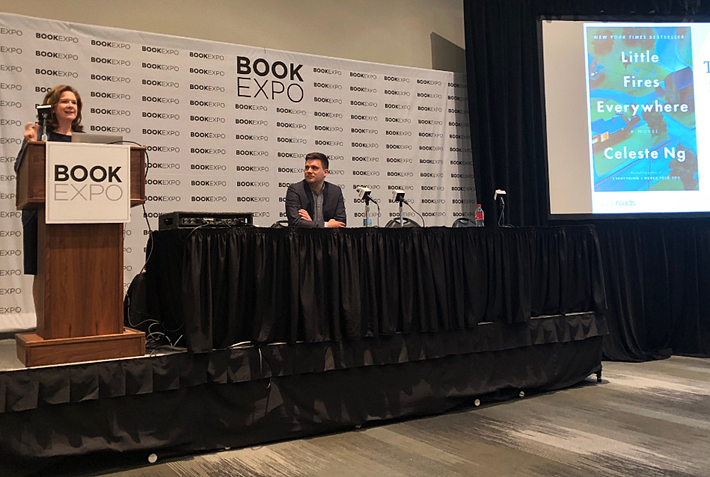 Goodreads is credited by Penguin Press for helping to rapidly build the popularity of bestseller ‘Little Fires Everywhere’ and generating 30,089 ‘Want to Read’ signals by release date. 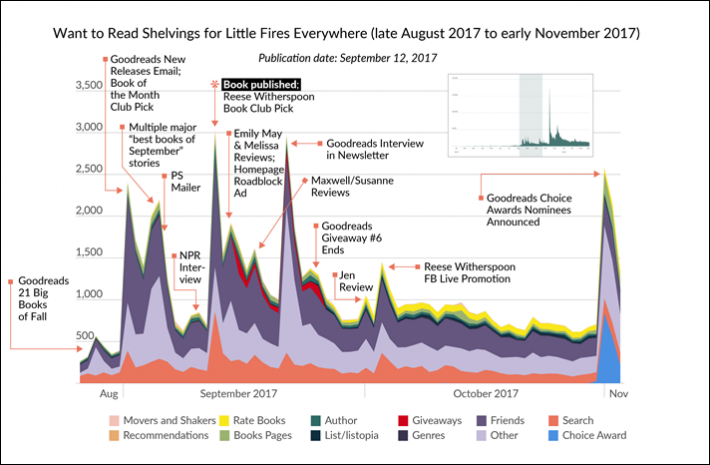 This chart from the Goodreads-Penguin presentation at BookExpo shows interest levels as interpreted by ‘Want to Read’ activity at Goodreads between late August (just before publication) to early November 2017 for Celeste Ng’s ‘Little Fires Everywhere.’ Image: Goodreads

One of Goodreads‘ most appreciated types of industry presentations has become its occasional “anatomy of” looks at how a publisher worked with the huge recommendations platform to develop the success of a particularly high-visibility title.

At BookExpo on Thursday (May 31), the company’s vice president for communications, Suzanne Skyvara, joined Penguin Press’ associate publisher and marketing director Matthew Boyd in such a session called “The Marketing Success Story Behind “Little Fires Everywhere. The novel by Celeste Ng’s Little Fires Everywhere was published in the US in September 2017. 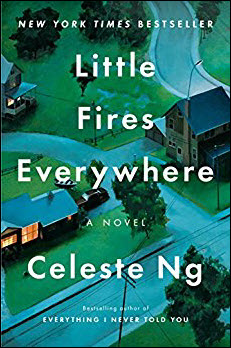 Goodreads, now owned by Amazon, was created by Otis Chandler in 2006, and it now cites membership numbers of some 75 million people.

Ng’s book has now been on The New York Times‘ hardcover bestseller list for 34 weeks. A four-pronged approach to promote the book to readers, booksellers, librarians, and news media has so far generated 160,379 ratings at Goodreads, according to Skyvara. That makes it the most-rated book at Goodreads published in 2017. The book’s average rating on Goodreads is impressive, too: 4.16 out of 5 stars from a readership not always known for its friendly consumer reviews. 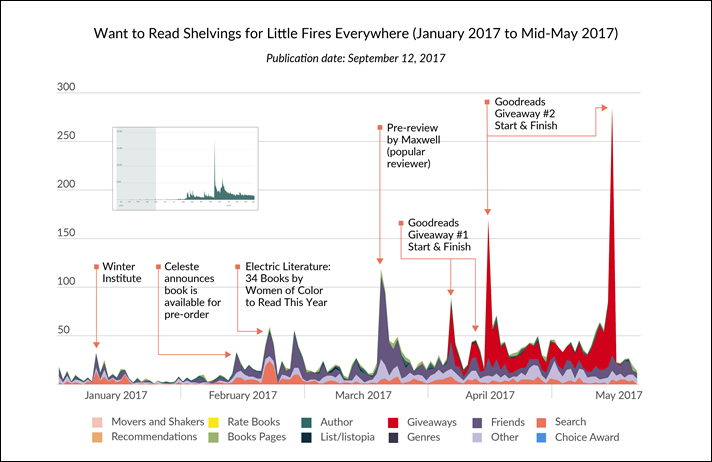 What Ng has called in interviews “an amplified version of friends recommending books to other friends,” Goodreads, it turns out is something that Ng had found early in its development. She joined in May 2007 as a reader and switched to her author profile seven years later with the publication of Everything I’ve Never Told You (2014, Penguin).

To distill the Penguin-Goodreads presentation into several high-level elements:

As more giveaways rolled out in May, June, and July, Penguin established the title as one of its big books for the autumn at BookExpo 2017 with ads and collected starred reviews from Kirkus, Publishers Weekly, LibraryJournal and Booklist.

A single five-star review in late June from one of the Goodreads faithful known as Angela M created another wave of adds to shelves.

And by the end of August, the book would be up to 169 reviews and 15,335 “Want to Read” shelvings, twelve days ahead of publication. 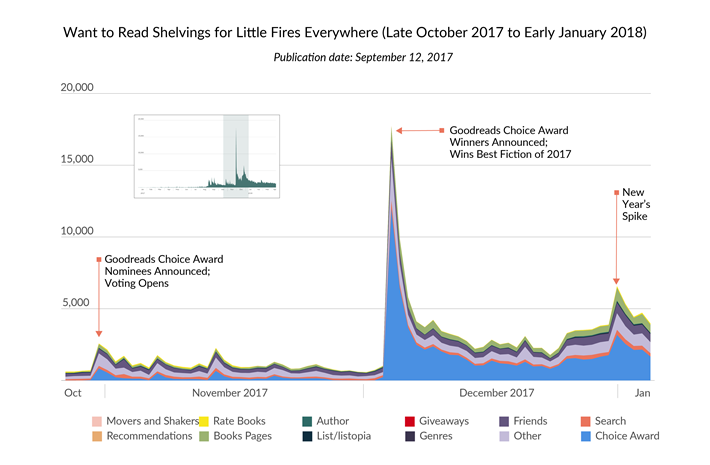 This chart shows the huge jump in ‘Want to Read’ shelvings (17,709) generated at Goodreads when ‘Little Fires Everywhere’ was named the Goodreads Choice best fiction of the year. Image: Goodreads 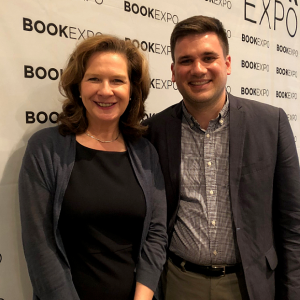 Other effects of the Goodreads amplification—as Penguin pursued many other channels of publicity including magazine and book club exposure—had to do with the inclusion in the “New Releases “monthly email the platform sends to 36 million readers.

And the timing of the actual release in early September was interesting.

“Publishing around a holiday like Labor Day is a bit nerve-racking,” Boyd says in a statement prepared for the presentation.

“Things seemed relatively quiet in late August, but then everyone must have come back from vacation on the same day, and they all seemed to be looking for their next must-read book. In the first 11 days, the number of ‘Want to Read’ shelvings on Goodreads doubled.”

Reese Witherspoon’s selection of Little Fires Everywhere for her #RWBookClub added a big boost, announced on the publication date, September 12, and a group on Goodreads called The Traveling Sisters chose the title as their “sister read.”

The ultimate coup in Goodreads terms was the book’s win of the 2017 best fiction Goodreads Choice award, which added an extra 17,709 “Want to Read” shelvings to the existing 122,537 discoveries on the platform.

And while you can read more details at Goodreads’ site here, it’s interesting to note the caveat that of course the company needs to make, complimentary to Ng and Penguin but also pragmatic in the world of book marketing:

“All the great book marketing tools in the world would not have worked without an amazing story. Goodreads can only help amplify the success of a good book. In the end, the story stands on its own.

“And in the case of Little Fires Everywhere, there’s a reason why the book continues to be on the bestseller lists. It’s a story that has clearly caught fire with readers.”