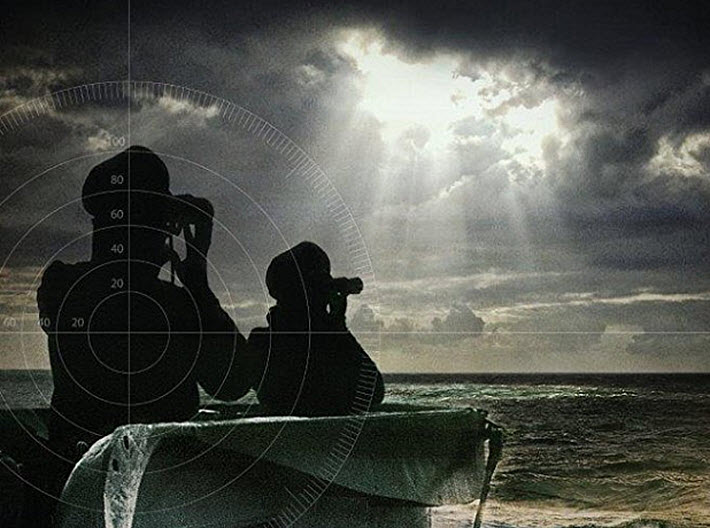 German-language users spend an average 10 million minutes on Wattpad daily. That may soon pay off for both the platform and German television company Bavaria Fiction. 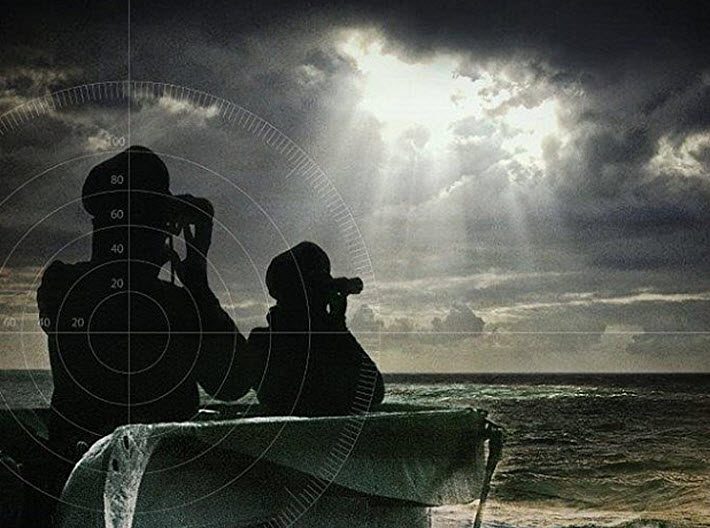 In a major partnership announcement, Wattpad has a German-language content deal with Munich-based Bavaria Fiction, maker of the new sequel series to ‘Das Boot.’ Image: Excerpted from Bavaria Fiction‘s poster

‘A Moment of Disruption Throughout Entertainment’

Opening a new chapter in its development as a provider of seed content to an array of international media, Canada’s Wattpad today (June 18) is announcing a partnership with German television production company Bavaria Fiction.

As Toronto’s Wattpad describes it, the arrangement gives Bavaria Fiction access to more than 1 million currently available German-language stories on the reading and writing platform, as well as to Wattpad’s community of more than 1.3 million people in German-speaking territories.

Wattpad’s activity data tells its staff that German Wattpad users spend an average of 10 million minutes on the platform every day. And essentially what Bavaria Fiction is buying is a right of first refusal on the platform’s German-language content.

Spokespeople are stressing the data-driven element of Wattpad’s ability to surface user-generated content for a production company like Bavaria Fiction. The same promise has drawn several international book publishers to seek stories from the site for development. Not unlike Wattpad’s new office in Hong Kong, focused on content development for the Southeast Asian markets, a partner in German-speaking Europe produces win-win benefits for the platform as well as for the production company, according to Aron Levitz, head of Wattpad Studios.

“When we partner with someone—with their understanding of the market, their development type, their adaptation schedules—they can help us ask even better questions of the machine. Bavaria Fiction has a great team.”Aron Levitz

In a conversation with Publishing Perspectives, Levitz says, “One of the really interesting things about Bavaria Fiction is that they’re not just looking for one type of adaptation. They do TV, they do movies, they do movies of the week, they do digital, so really it’s finding German-language stories for us to produce together in those different media forms. And they do get a first look at that German content.

“We’re using data to find really interesting, diverse writers. And it’s that data—in a moment of disruption throughout the entertainment industry—that’s going to give our partners like Bavaria Fiction a better chance” at spotting and developing successful material.

“The data comes from built-in fans and audiences of stories” on Wattpad, Levitz says, “and we know that these audiences will move from the platform to bookshelves or to an online streaming service or to a broadcast show or to a movie theater. That’s the core of it.

“We see Bavaria Fiction as interesting because they definitely are thinking about getting ahead of this moment of disruption in the industry.”

At a time when some publishers and other media leaders may not yet understand the principle of drawing on proven content for development, he says, “Bavaria Fiction is thinking about, ‘How and who should we work with?'”

Bavaria Fiction is a particularly interesting player at the moment. Its name is a recent rebranding from the former Bavaria Fernsehproduktion. It’s a subsidiary of Bavaria Film and ZDF Enterprises, led by co-managing directors Jan S. Kaiser and Manfred Haus-Plüger with Oliver Vogel as chief creative officer. In addition to its headquarters in Munich, the company has offices in Berlin, Cologne, and Stuttgart.

In Stewart Clarke’s article for Variety, on the company’s recent developments around its 10th anniversary, the house is described as producing almost 300 hours per year of content.

Bavaria Fiction is the company behind a coming television-series sequel to the 1981 film Das Boot, a production currently in post-production, directed by Andreas Prochaska with a budget of more than US$30 million for eight episodes, “one of the priciest series ever out of Germany,” writes Clarke.

In February, another Variety story noted that Bavaria Fiction is also making Germanized, a French-German production “that is Deutsche Telekom’s first original series in Germany, and Amazon Prime’s first in France.”

“Getting on board ideas earlier, using existing data and B2C channels are a key part of production businesses like ours evolving in the digital age.”Jan S. Kaiser

In a prepared statement for today’s announcement, Bavaria’s Kaiser is quoted, saying, “In this continuing competitive era in which ‘content is king,’ we’ve decided to not only seek viewers, but also views.

“Getting on board ideas earlier, using existing data and B2C channels are a key part of production businesses like ours evolving in the digital age, with the added bonus of bringing more of German-speaking creators’ talent to screen.”

And Kaiser’s CCO Vogel says, “This deal with one of the world’s leading publishing platforms will increase both the scale and reach of our potential development pool as well as the quality of ideas which come across our desks.

“It’s a hugely exciting new partnership for which I would like to personally thank our producer Christina Henne who was crucial in the deal-making process that brought Bavaria Fiction and Wattpad together.”

‘Great Questions To Ask the Machine’

The new partnership with Bavaria Fiction in part reflects the demographics of Wattpad’s 65-million-user base, 90 percent of them millennials or members of “generation Z”: Bavaria Fiction’s digital strategy is targeting consumers aged 16 to 39.

And as Levitz points out in his interview with Publishing Perspectives, “We actually have internal resources helping us point out good content” to a non-English-language partner like Bavaria Fiction.” Wattpad has “ambassadors,” many of them strongly positioned star writers on the platform, who can help pinpoint and assess content for potential development–even as the company’s IT team continues its data-driven evaluations in a context of more than 50 languages supported by the platform.

“It’s also nice to see,” Levitz says, “that this really is a partnership.

“We always say that with access to such vast amounts of data—we’re collecting a billion points of data a day from these 65 million users around the world on 500 million-plus stories—we know great questions to ask the machine. But when we partner with someone—with their understanding of the market, their development type, their adaptation schedules—they can help us ask even better questions of the machine.

“Bavaria Fiction has a great team that we sit down with, a team we’re starting to have those weekly working sessions with, so we can say, ‘Look, here’s what the data is showing us are the biggest stories in Germany this week,’ or ‘Here’s a trend that’s standing out there.’

“And yet whatever is happening today culturally in Germany, in Hamburg, and Berlin, and Cologne, that we don’t know about,” the team at Bavaria Fiction does know. Together, Levitz says, Wattpad’s staff and Bavaria Fiction’s group can “ask the machine those questions, as well,” and thus create a more intelligent level of data research for Wattpad’s system to perform.

“It’s a very two-way communication, then, with all our partners,” Levitz says. “It’s not just finding a story but also taking cultural context, business and industry context, and bringing them back to our platform, and asking the platform and the audience, ‘Does this resonate?’

Wattpad’s “data is audience. It’s making sure that people show up on Day One. These are diverse, unique stories from amazing writers, people who would never be found in another way.”Aron Levitz

“That’s why we think there’s a Wattpad story that can go anywhere and can exist in any media type and any adaptation type, from books to movies to games, because of the partnership we do and the cultural nuances we can start learning about.”

The reach of Wattpad’s voluminous growth over almost 12 years is one factor behind the shift of the storytelling imprimatur away from book publishing and into a more media-diverse context. No longer do all the best stories start with a book.

While Wattpad Studios’ deputy general manager for publishing, Ashleigh Gardner, has quickly rolled out trade publishing partnerships with houses including Hachette Romans, HarperCollins Children’s, Simon & Schuster and many others, Levitz’s offices are pushing ahead in the new traction that film and fine television have grabbed in the ascendancy of Netflix, Amazon Studios, HBO, Canal Plus, BBC, and other production giants in a “golden era” of visual storytelling.

And Levitz is making the point that in any scenario of cross-media development, the shared knowledge of these media partnerships is the key.

“This why we use the word data as often as we do,” he says. “Our partnerships are about opening up the window to what we can learn together. That’s why you see the partnership” that Gardner has made with Hachette Romans’ Cécile Terouanne, “on the publishing side, and you see the Universal partnership on the TV side in the US. We’re giving access to this really unique data.

“That data is audience. It’s making sure that people show up on Day One” because Wattpad’s team can tell a partner that millions of reads have buoyed a given story to the top of the list. “These are diverse, unique stories from amazing writers, people who would never be found in another way.”

Still, Levitz is taking nothing for granted. And in his conversation, it’s apparent that he’s keeping in mind a high view of where the Canadian storytelling engine has arrived. Asked by Publishing Perspectives whether he wants to see more such partnerships as the German-language arrangement with Bavaria Fiction develop, he’s ready with “yes” in all those 50-plus languages on the platform.

“This is a big moment for Wattpad,” he says, “even though it’s moving so quickly. Part of the focus for myself and Ashleigh Gardner is expanding” into new territories “because we have audiences in all those countries. We have stories the German audience loves, so we want to see them adapted. We want to see this in Bahasa, and in Swedish, and Icelandic, and in Spanish.

“It’s all about how we can help partners,” he says, “have better success in entertaining those people.”

Which, ironically, says Aron Levitz, means, “What we’re really focused on is speaking the same language.”