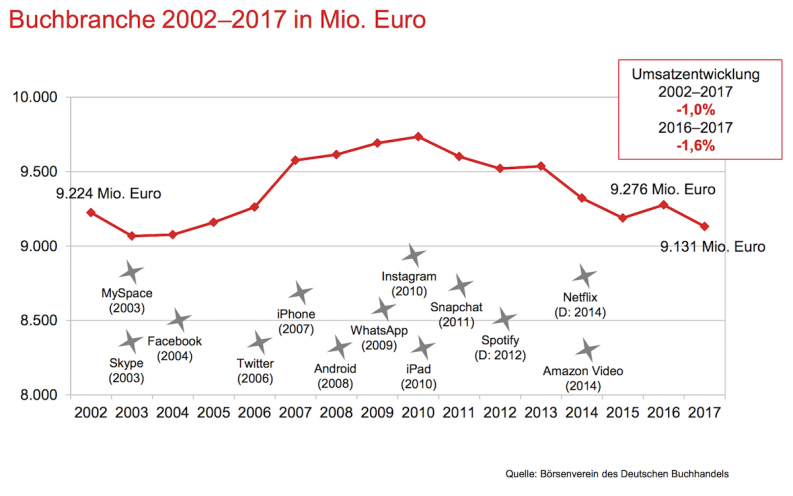 The latest book market statistics from Germany show that flat book sales are being generated by fewer overall book buyers. The Börsenverein calls for a focus on potential readers. 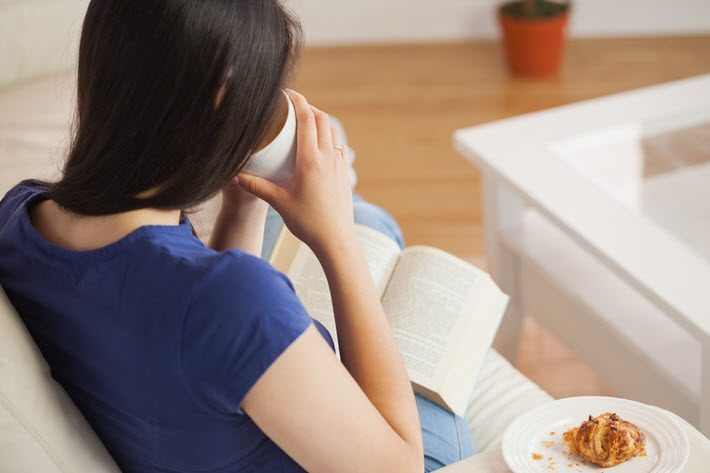 Skipis: ‘The Book Must Come to the Customers’

This week, the German Publishers and Booksellers Association (Börsenverein des Deutschen Buchhandels) has released detailed statistics on the German book market for 2017. Among highlights from the report, the association cited stable turnover and an industry-wide imperative to grow the number of book buyers in the country. (See the full presentation in German here.)

But this relatively stable turnover came from fewer book buyers who are buying more books on average, the association says.

While it’s good news that existing book buyers are purchasing more books each year, it’s a worrying trend that there are fewer of them.

The Börsenverein cites competition from online entertainment as a major factor in the decreasing number of book buyers.

“In times of strong competition from other media, the book industry is working to grow and meet the needs of book buyers,” said Alexander Skipis, head of the Börsenverein. “Our surveys show that there are big chances to excite readers about books. Even if they read fewer books today, those surveyed associate reading with positive feelings.

“At the same time, they suffer from the hectic pace and stress of today’s digital, multitasking society. There is growing social pressure to react and be online constantly or get left behind. People crave downtime, which they remember books can offer. They want emotional experiences, inspiration, trustworthy information. Increasingly, people are looking for guidance from the book market.”

Skipis also called for an industry-wide focus on bringing consumers back to books.

“It’s no longer enough to wait for customers to come to the book,” he said. “The book must come to the customers—and the industry needs to find a strategy for that.”

Heinrich Riethmüller, chairman of the Börsenverein, echoed this call to action, saying, “Book buyer development requires bookstores and publishers to change their thinking.

“We have to focus more on the needs of potential readers.

“Many bookstores and publishers are already working on marketing solutions, customer outreach, and new formats in order to put customer needs front and center.” 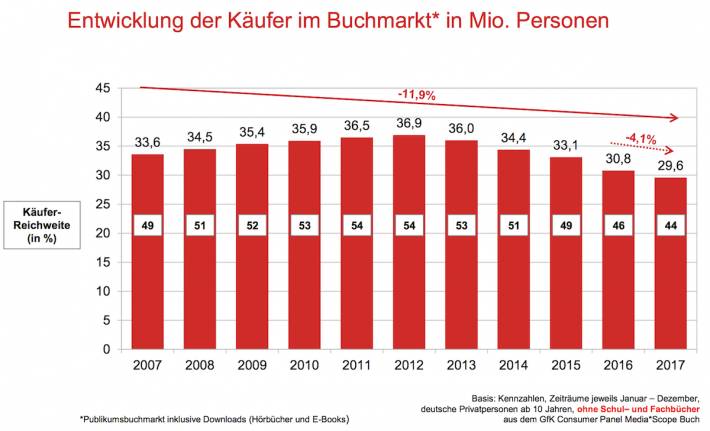 In 2017, 3.5 million people bought an ebook, about 5.2 percent of Germany’s overall population.

This led to more units being sold in 2017, but because of a drop in ebook prices (5.1 percent) and customer preference for lower-priced ebooks, ebook revenue was down slightly in 2017 by 1.4 percent.

Physical bookstores have retained a market share in Germany of 47.1 percent and remain the largest sales channel for books in the country. Revenue from this sector totaled €4.3 billion (US$5.1 billion) in 2017, down 2 percent from 2016.

The second-largest sales channel for books is publishers selling directly to businesses, institutions, and others. Accounting for 21.3 percent of Germany’s book sales, revenue in this sector remained steady in 2017 at €1.94 billion (US$2.3 billion).

Not surprisingly, sales through online bookstores rose in 2017 by 1.5 percent, becoming the third-largest book sales channel with 18.8 percent of the market.

The largest growth in overall rights sales came from travel, nonfiction, and education titles. Children’s books made up the largest segment of rights sold abroad—38.7 percent of the total.

And Germany maintained its strong tradition of translating books from other languages in 2017. German publishers released 9,880 first-edition translations, amounting to 13.6 percent of the total title output for the year.