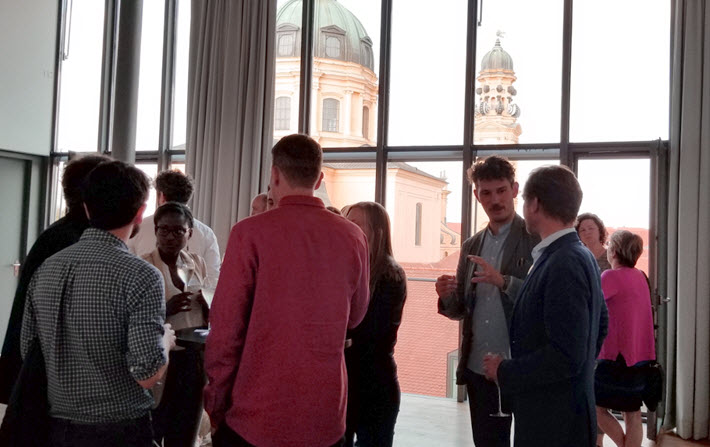 UK and US editors are in Germany this week—on a trip organized by the Frankfurter Buchmesse—and hearing German publishers address a big issue in the market right now: finding more book buyers. 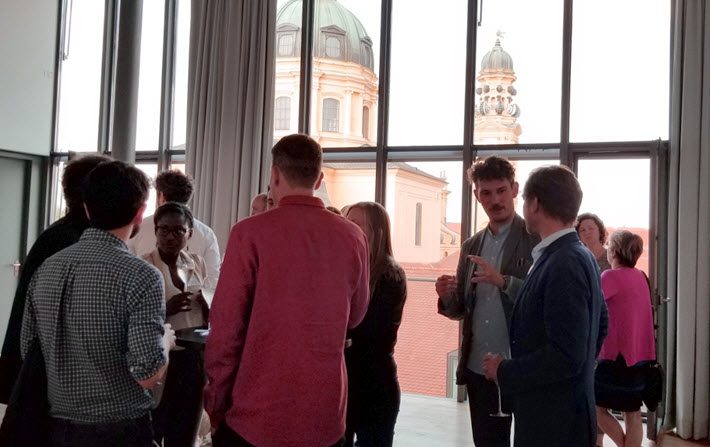 Participants in the Frankfurter Buchmesse Editors trip to Germany at a reception at Munich’s Literatur Haus. Image: Porter Anderson

A Focus on ‘Lost Readers’

In meeting with personnel from many of Germany’s most prominent publishing houses, a group of 15 book editors from the UK and the US are encountering a robust, plucky resolve in the face of a reality that clearly distresses them.

The 2018 Editors Trip to Germany for British and American Publishing Houses is produced by the Frankfurter Buchmesse—led by Lars Birken-Bertsch—and today (June 27) is at its halfway point through a furiously packed sequence of meetings, discussions, presentations, roundtables, and train journeys in Frankfurt, Munich, and Berlin.

And participants are remarking not only on the nature of the commentary they’re hearing in frank give-and-take sessions with leading professionals in the Germany industry, but also on the clarity of the trends that make up the picture here.

In a dual interview moderated by Publishing Perspectives with two prominent independent publishers, for example, the first remark is the one that opens each meeting with a major house: “We’ve lost more than 6 million readers in Germany.”

The source of the alarming scenario under discussion is a study reported on by Publishing Perspectives and presented in June by Jana Lippmann, head of market research at the  Börsenverein des Deutschen Buchhandels (Germany’s Publishers and Booksellers Association).

Figures vary slightly from one retelling to the next, but the gist of the “lost readers” concern is that from 2012 to 2016, according to the study by GfK, the German book trade here lost 6.1 million book buyers.

The share of the population buying books fell from 54.5 percent in 2012 to 45.6 percent in 2016, close to nine percent.GfK Study of the German Market

The buyer reach—the share of the population buying books—fell from 54.5 percent in 2012 to 45.6 percent in 2016, close to nine percent. And the figures for the first half of 2017 already show that the trend is continuing: in the first six months, another 600,000 buyers were lost.

This doesn’t mean that the meetings with publishers and booksellers this week in Germany are all negative. It does mean that there’s a certain edge, of course, to the market. Ironically, as some of the UK and US participants have been saying, the clarity of the message from the Börsenverein’s report can be helpful. In those two larger English-language markets, such attrition, while likely very much underway, is harder to calculate.

Nevertheless, the disturbing context of such a clear reduction in the consumer base has made publishers wary of speaking on the record. And so in our reporting from the editors’ trip to Germany, we’ll be aggregating comments and not assigning specific quotes to specific houses or players.

Figures for the first half of 2017 already show that the trend is continuing: in the first six months, another 600,000 buyers were lost.GfK Study of the German Market

To start off, the key factors behind such a drop in book consumerism the publishers are laying out to the visiting editors are these:

Participants in the UK and US Editors Trip to Germany tour the renonvated Hugendubel bookstore in Munich’s Marientplatz. Image: Porter Anderson

While the responses from houses vary, the sense of a constricting market is palpable.

One house’s staff has revealed that it’s planning to cut its output froripm 500 to 350 titles per year, putting more focus on strong marketing support for the books that it does produce.

Another house’s leadership talks of creating “sophisticated gift books,” usually humorous, shorter works that can attract a more commercial consumer base and help support the cost of putting out more serious work.

Still another points out to the visiting editors that the German market has been in decline for some 10 years. The country’s  market is a rather fragmented one, the largest major publishers accounting for about 13 percent of it.

At Literaturhaus in Munich, Tonja Graf tells the group that the facility has seen little attrition in its literary programming, but the building does help pay for its books-community work by renting space for offices and events to other companies and organizations—220 evening events in its own presentation plan and some 900 event overall each year.

We’ll have more reportage as the tour continues. Having started in Frankfurt, the group leaves Munich late Wednesday to end the week in Berlin on Thursday and Friday.

Participants in the 2018 Editors Trip to Germany

Participants in the 2018 Editors Trip to Germany for British and American Publishing Houses, at Munich’s Literaturhaus. Image: Porter Anderson