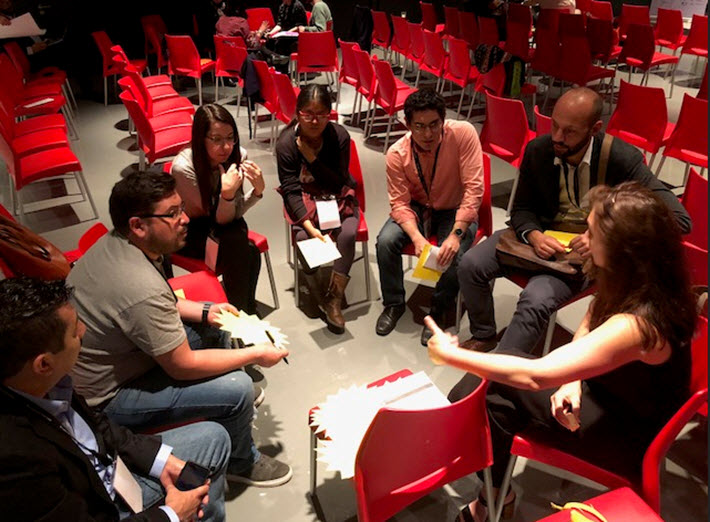 As Sweden’s Storytel prepares to enter the Mexican market, a set of challenges awaits, from building the habit of audiobook listening to bringing aboard regional publishers. 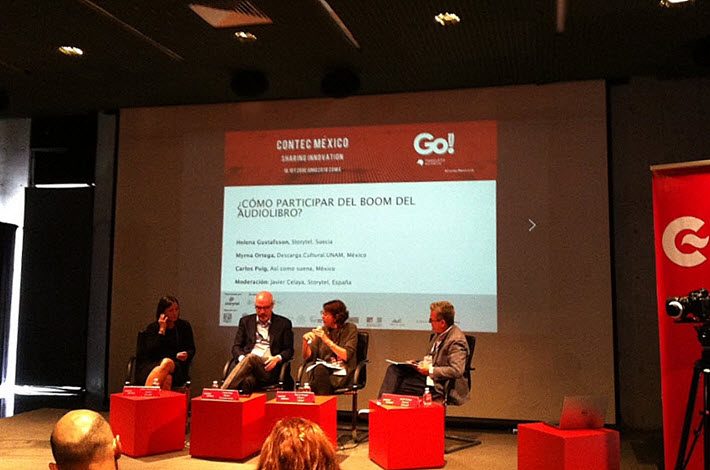 ‘Our Gateway Into Latin America’

The Stockholm-based audiobook subscription company Storytel has announced that its entry into Mexico will occur later this year. But each new market carries its own hurdles challenges, according to Helena Gustafsson, the company’s head of global publishing.

And founded in 2005, Jonas Tellander’s Storytel reports that it signed up 500,000 subscribers in 2016, the year it acquired the Danish company Mofibo and Swedish publishing house Norstedts, followed by Denmark’s People’s Press in 2017.

And in an interview with Publishing Perspectives, she tells us that one phenomenon revealed by a Storytel study is that as the company enters new markets, it’s frequently introducing the habit of audiobook listening to consumers. Storytel’s data indicates, Gustafsson says, that 20 percent of subscribers didn’t listen to audiobooks prior to subscribing—and 55 percent had never paid for audiobooks.

“In five years,” Gustafsson says, “customers have gone from buying two audiobooks per year to listening to two per month.”

Still, she’s quick to say that the audio format doesn’t pose a threat to print or ebooks. “Audiobook listeners are increasing their book consumption, and not replacing print books with audio.”

This echoes a finding from the Audio Publishers Association’s new Edison Research study of audiobook consumers’ habits: audiobook listeners, according to that data, consume books in all formats with 83 percent of frequent listeners saying they’ve read a hardcover or paperback in the last 12 months, and 79 percent reporting that they’ve read an ebook.

Storytel, Gustafsson says, has identified international expansion as a mandate, because 90 percent of subscribers listen to local content.

“The thing that unites us all is the love of stories. The whole of the human race is built on storytelling.”Helena Gustafsson

Already present in Spain, Storytel expects to grow its Spanish-language catalogue this year by a third, to some 6,000 titles, a goal that should be reached in time for the advent of its Mexican operations.

“We chose Mexico as our gateway into Latin America,” Gustafsson says, “because we thought it’s a good place to start to manage other countries without local teams at the beginning.”

Many dialects of Latin American Spanish differ from those spoken in Spain, however, to such a degree, she says, that Storytel will require new editions of audiobooks for that potentially vast market. Mexico thus has an important advantage as the jumping-off point because there are relatively neutral Spanish dialects spoken there, which  can be embraced in many countries of the region.

And yet another key challenge for Storytel in approaching a new market may have less to do with linguistic idiosyncrasies than with established players in the business.

“It’s always a challenge to get the publishers on board,” she says, “because we have a very different business model.”

In April , Gustafsson was on a panel moderated by Publishing Perspectives, and she elaborated on this point, saying, that publishers can be slow to warm to the subscription model when they’re traditionally “stuck to the idea of revenue per-sold-unit. As seen in other subscription operations, Storytel uses algorithms, she said, “to tell us how much your book is read, and you’re paid accordingly. We pay less for shorter books than longer ones.”

“And it can also be difficult to bring listeners onboard, depending on the paying options, because some markets don’t have credit cards, while other countries have monthly or weekly patterns of salary payments.

“We spend a lot of time in understanding these things, and it’s one of the reasons we like to work with local talent. It’s impossible to come from another country and try to fully comprehend a new marketplace.

“Every nation is a different book,” Gustafsson says, “and each narrator brings a different touch” to recording an audiobook, “which is why we don’t use artificial intelligence.”

Beyond language, the a market’s cultural context includes how people live and view the world, she says. “And to succeed” in multiple international markets, “you have to understand that.

“But the thing that unites us all is the love of stories,” she says. “The whole of the human race is built on storytelling.” 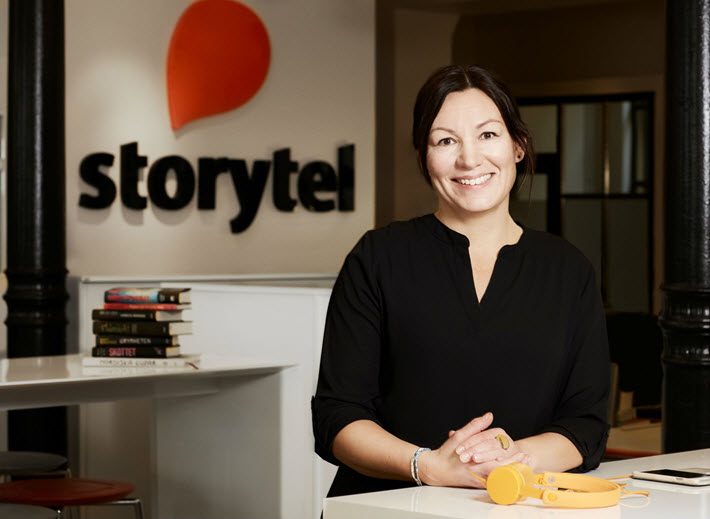 Audio Rights: ‘Use Them or Lose Them’

In terms of genres, crime and self-help are Storytel’s biggest sellers, followed by nonfiction, backlist, and series.

“CDs are not sexy, but apps are cool, and in a market that stands parallel to Netflix and Spotify, it becomes easier for us as the world develops.”Helena Gustafsson

And Gustafsson says that publishers need to take the same approaches to audio rights that they use in print rights: as the saying goes, “use them or lose them.” But she acknowledges that audiobook production can be costly and may not generate fast revenues when released.

On the other hand, audio can attract many consumers who might not consider themselves to be readers, something Nielsen’s Andre Breedt pointed out last October at Frankfurter Buchmesse’s The Markets conference.

I talk to a lot of people,” she says, “who use the service in many countries, and they read fiction but listen to nonfiction, or the other way around.”

She recommends that newcomers, particularly people who aren’t habitual readers, begin with relatively easy books to train their ears. “You have to develop your listening,” she says, “and that’s interesting for us, because when we enter a country, publishers want to start with literary books.”

A Storytel launch is accompanied by a marketing campaign that promotes the multitasking concept of audiobooks, another thing borne out as popular by the Audio Publishers Association’s new report. Edison Research respondents for the association said that the top three activities people in the American market named while listening to audiobooks were driving (65 percent), relaxing before going to sleep (52 percent), and doing housework and/or chores (45 percent).

But for all the convenience and enticements laid out to potential consumers, “It still takes time,” Gustafsson says. “It’s not just about telling people how to use an audiobook. Many people tend to see them as something only blind or elderly people use.

“With a subscription service, people begin to see audiobooks as cool,” she says. “CDs are not sexy, but apps are cool, and in a market that stands parallel to Netflix and Spotify, it becomes easier for us as the world develops.” 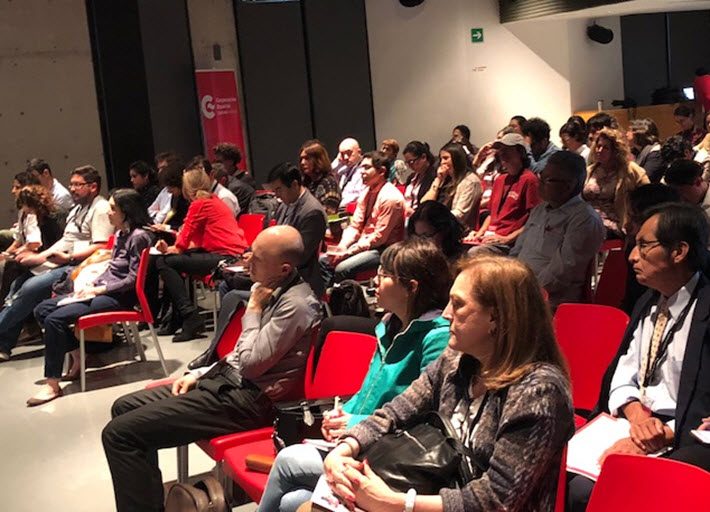 Storytel offers a range of academic texts and lectures in audio. “There’s a hunger for quick knowledge in the world,” Gustaffson says.

“Listening is so intimate. When you have that voice in your ear all the time, that narrator plays a role in your life.”Helena Gustafsson

Ironically, poetry—which you might think would make an easy transition to audio, hasn’t proved to be a major seller. “It could be lovely to listen to,” she says. “Maybe it’s something that will develop as people listen more.”

She also says that the idea of everyone wanting shorter and shorter content is “a misconception.  “People actually prefer longer books, although there will always be someone who wants a one-hour entertainment.”

Gustafsson also points to the fact that listeners frequently seek out a narrator they like, not just works by a certain author. “In the mature markets,” she says, “people don’t only look for the authors, but for who narrates the books, as well.

“Listening is so intimate. When you have that voice in your ear all the time, that narrator plays a role in your life.” 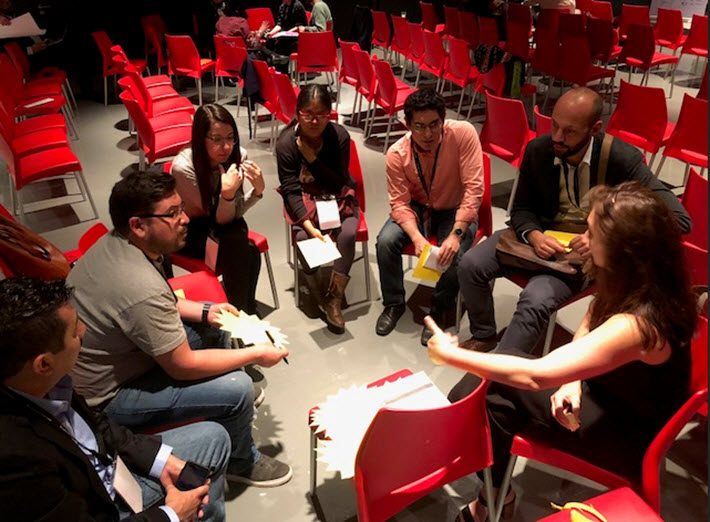 While it’s not always a leading point made about audiobooks in the publishing market, Gustafsson highlights the potential of audiobooks as tools for boosting children’s literacy, in both mature and developing markets.

“Some publishers will be with us from the beginning, and some will come later. We have to prove ourselves first.”Helena Gustafsson

“A misconception with children,” she says, “is that they need pictures to accompany text. But they’re better listeners than adults. In some markets, there are already audiobooks for children, but not in others. Some countries promote reading to kids, but some parents feel they should be the ones who read to their children, and that they shouldn’t be buying them audiobooks.

“However, children like to repeat things, and so a subscription service is perfect for them.”

Latin America has a strong tradition of children’s books, particularly in Brazil. Colombia was once seen as the world’s pop-up book capital, prior to China’s dominance of production. And Storytel’s subscription service can be promoted as beneficial to lower income families for a region in which poverty is rife, salaries are low, and children’s books are expensive.

The need to promote reading for children is hardly limited to the developing world, however, Gustafsson says. And while audiobooks are a new format for many readers, she says she believes that it’s a habit that can be cultivated.

“It takes time to create habits, and listening to audiobooks is a habit. But habits create addictions” in both younger and older readers.

Storytel’s biggest demographic is among consumers aged 25 to 44, but the need to engage technology to use the service is no barrier to older users, she says. The service can be used in convalescence, and may well stick with a listener if he or she returns to health.

With 68 indigenous languages spoken in Mexico, Gustafsson says there’s special potential there to promote books in languages other than Spanish. In Sweden, she says, listeners have asked for audiobooks in some of the country’s regional dialects.

So far the reactions of Mexican publishers have been positive, says Gustafsson, several already signed. “Some will be with us from the beginning, and some will come later. We have to prove ourselves first.”

But even publishers who are producing their own audiobooks, or planning to, would do well to get onboard, says Helena Gustafsson.

“If you don’t work with Storytel you won’t know how we grow. And doing so is a clever way of knowing when to start producing audiobooks yourself, once the revenues have grown and you can pay for their production.”

More from Publishing Perspectives on Storytel and audiobooks is here.